May 13, 2015: talk about prescient / timely. I posted the note below later last night. This morning, over at CNBC, EIA is reporting that US shale industry "blinked." Somewhat unconvincing argument.

Note: I'm always a bit nervous when I post these meanderings. There may be huge errors. This is to help me put things into perspective. Don't quote me on any of this stuff. In fact, it's probably advisable to ignore this post.

As we will see in a few moments, it's hard to get a reliable number for a) the amount of oil Saudi Arabia produces on a daily basis; and, b) how much of that production is exported.

These numbers are probably not all that reliable, and they are certainly out of date but wiki reports:

Now, we get this, Bloomberg at Rigzone reporting:


Saudi Arabia boosted crude oil production for a second month to the highest level in at least three decades, helping to raise OPEC output as U.S. supply growth showed signs of slowing. The Middle Eastern country increased crude output by 13,700 barrels a day in April to 10.308 million, according to data the country communicated to the Organization of Petroleum Exporting Countries’ secretariat in Vienna.

OMG! "To the highest level in at least three decades." Except maybe in 2006 when maybe they produced even more.

On the other hand, from outside sources:

This all seems to be a "war" of words. There is not a whole lot of difference (at least in my mind) between 10.31 million bopd and 10.07 million bopd when one recalls that Saudi Arabia at one time announced plans to increase their production to over 12 million bopd.

So, this is a headline? Saudi Arabia boosted crude oil production for a second month to the highest level in at least three decades.

Wiki said the "number" was 10.6 million bopd back in 2006. As noted, the numbers are unreliable for a number of reasons and then there's the question of whether one is measuring crude oil only or also associated condensates. Whatever. The increase seems unremarkable when looking at the collapse in oil prices.

Can anyone really get excited about this? Last August before Saudi made their famous announcement, Saudi oil imports into the US about 28 million bbls/month; in February (most recent data), 26 million bbls/month:

Which brings us to the second story. At the linked article, an analyst had this to say:


“The Saudis must be content that their policy of protecting their market share has worked so well and prices did not stay below $50 for long,” said Christopher Bellew, senior broker at Jefferies International Ltd. in London. “They held their nerve and now see a stable market with their share preserved.”

Really? Six months in the history of the oil and gas industry is hardly very long.  Graphically, the story looks even more unremarkable.

The EIA estimates that US shale production will decrease by 86,000 bopd in April, which is a much bigger decrease than the paltry 13,700 bopd Saudi Arabian increase.

I think the whole increase (Saudi) / decrease (US shale) is trivial -- up to this point.

Anyway, I often make simple arithmetic errors. That 0.1% above may be an error. Maybe I misread something, but if the increase truly is 13,700 bopd on 10 million bopd and if that truly works out to about 0.1%, it seems a lot of talk about something pretty trivial. Shoot, I think Libyan exports are down to around 300,000 bopd when they could easily be over a million. Don't quote me on that; it's been a long time since I looked at Libyan exports. Speaking of which, I think Iraqi exports have fallen significantly also. But now I'm rambling.

Time to move on.

Two last non sequiturs:
One last thought: some have opined that Saudi took their action not against shale fracking but against the surging solar and wind industry worldwide. In fact, it's probably all about Iran.

"Futures" suggest it could be a nice day tomorrow.

This is a most fascinating story, the link sent by a reader (thank you). Argus Media is reporting:


Tesoro will deliver 1.6 million bbls of  Bakken crude into its Alaska refining system in the first half of 2015.

Tesoro is the last major fuels refiner operating in Alaska. Its 72,000 b/d refinery in Kenai, Alaska, southwest of Anchorage in Cook Inlet, supplies jet fuel, gasoline and diesel, including to Flint Hills Resources, which shut down its North Pole refinery last year.

Tesoro has previously said it can run 20,000 b/d to 30,000 b/d of Bakken crude at Kenai with little modification. The facility was built to run on Cook Inlet crude and similar light, sweet crudes.

Tesoro plans to use a 360,000 b/d proposed rail offloading terminal in Vancouver, Washington, to supply its west coast refining system including Kenai with greater volumes of Bakken crudes. That facility continues to inch through a state permitting process chief executive Greg Goff called "painfully slow" during a morning conference call to discuss earnings.

Tesoro now expects a draft environmental report from the commission this summer, with a final ruling by a state energy site review commission and, ultimately, the governor to follow.

"But at the end of the day, we're somewhat at the mercy of how that progresses," Goff said.

I'm not holding my breath.
Posted by Bruce Oksol at 10:36 PM No comments:

Email ThisBlogThis!Share to TwitterShare to FacebookShare to Pinterest
Labels: Alaska

Note: I have not checked if all links work. There will be factual and typographical errors. If this is important to you, go to the linked sources.

The state has released 2014 figures for taxable sales and purchases (TSP). There could well be scores of links from media outlets across the country recounting the extraordinary Bakken economy.

The North Dakota state website may be the first site you want to visit. 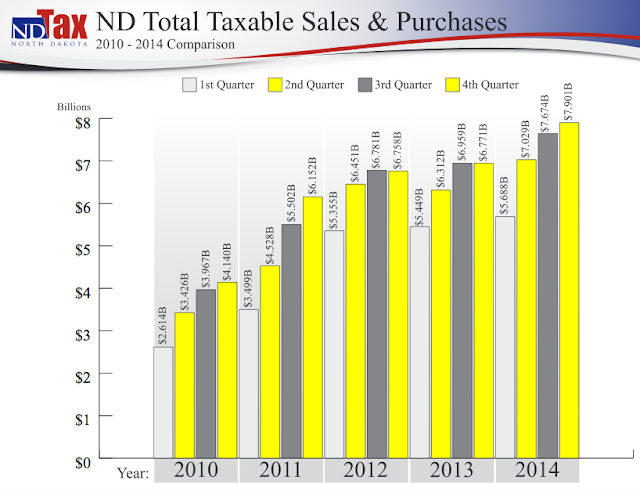 It would have been interesting to see the graph go back to pre-2007. The Bakken boom began in 2007 in North Dakota. By 2010, the Bakken boom as well underway.

Other sites that readers have sent me (thank you):
In addition, the tag "Taxable Sales" will take you to any number of posts on the blog related to this subject.

The slump in oil prices began in October, 2014. It takes awhile for "things to turn." Rig count did not decrease significantly in the fourth quarter of 2014; the rig count in North Dakota started plummeting in January, 2015.

Rig count (according to the monthly Director's Cut):
Taxable sales and purchases for the state (numbers rounded):
Cities: TSP percentage increases year-over-year for certain selected cities in North Dakota (the state lumps West Fargo / Fargo into one center [Fargo]; they are broken out below); one can easily see that the boom "moved" to (or caught up with) Watford City and Dickinson:
Year-over-year percentage increases for the state (again, numbers rounded):
Among counties, Dunn County has the highest percentage increase, at over 60%.
Posted by Bruce Oksol at 9:49 PM No comments:

This Is Not An Investment Site; Do Not Make Any Investment Or Financial Decisions Based On What You Read Here Or Think You May Have Read Here -- May 12, 2015

Regular readers know the reason for the "epidemic" of water main breaks in Los Angeles. This one is being reported by NBC Los Angeles. 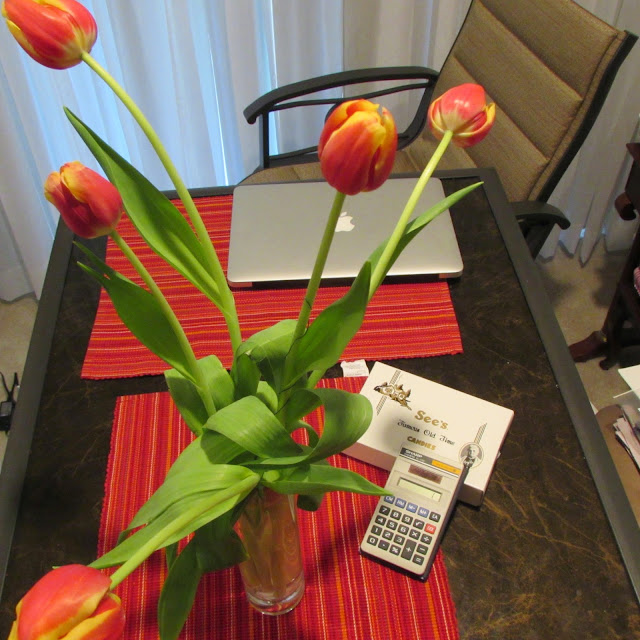 
RBN Energy: update on pipeline capacity out of the Permian.


EPD announced it’s latest  – yet to be named – new construction crude pipeline project at the end of April. The 540 Mb/d capacity pipeline will run 400 odd miles from Midland, TX (the main crude trading and storage hub in the Permian basin) to an existing Enterprise terminal at Sealy, TX.

At Sealy the pipeline will connect with EPD’s existing Houston crude distribution network – principally via the Rancho II pipeline, due online this July (2015) that will connect Sealy with the EPD storage hub at ECHO – southeast of Houston.

The Rancho II pipeline will have initial capacity this year of 480 Mb/d but can be expanded to as much as 1 MMb/d if required and as we described recently forms a key component of EPD’s pipeline network to deliver crude from the Eagle Ford (and now the Permian) into ECHO.

The new Midland pipeline is supported by long-term agreements with shippers and is expected online (subject to approvals) by 2Q 2017. The pipeline will be supplied at Midland by a combination of truck and pipeline deliveries into the existing EPD terminal that had 1.4 MMBbl of crude storage as of March 2014 and is going to be expanded for the new pipeline.

EPD already own a 674-mile West Texas gathering system in the Permian including three terminals in New Mexico at Hobbs, Lynch and Jal. The existing throughput at the Midland terminal is about 335 Mb/d of crude (according to EPD’s Analyst Day presentation in March 2014).

"No one" is showing up for President Obama's mideast summit. Except perhaps Senator McConnell.


The Department of Health and Human Services said insurers must cover at least one birth control option under each of 18 methods approved by the FDA — without copays.

President Obama's healthcare law requires most insurance plans to cover preventive care at no additional charge to patients. That includes employer plans serving about 3 in 4 workers.

I remember the good old days when the Brits were happy if they could find one mole in their intelligence operations. (I am in my Tinker, Tailor, Soldier, Spy phase. Re-reading the book and watching the movie several times again).

But now we have NATO reportedly expelling dozens -- not a dozen, but multiple dozens -- of Russian spies from NATO headquarters in Brussels.
Posted by Bruce Oksol at 9:12 AM No comments:

Email ThisBlogThis!Share to TwitterShare to FacebookShare to Pinterest
Labels: ObamaCare


UK Oil & Gas Investments (UKOG) announced Friday that Schlumberger has estimated the gross overall oil in place (OIP) for the Jurassic section of the Horse Hill-1 well in the UK to be approximately 271 million barrels of oil per square mile.

A total of 255 million barrels gross OIP lies within the tight limestone and mudstone plays of the Kimmeridge, Oxford Clay and Lias, according to Schlumberger. Earlier this year, US petrophysical analysis firm Nutech estimated that the Horse Hill-1 well near Gatwick Airport contained a total oil in place value of 158 million barrels per square mile.

Original Post
Several links for this story:
I've followed the story for a short time; didn't think much of it early on -- location around Gatwick Airport in southeastern England. Heavily populated; magnet for activists. But it's getting a lot of interest this week.


Independent researchers have finished trawling through UK Oil and Gas's electric log data for the Upper Portland Sandstone at its Horse Hill oil discovery, and there's more oil in the ground than originally thought. In fact, there's an extra 12.8 million barrels. This is on top of the well-publicised upgrades made to the Kimmeridge, Oxford and Lias intervals last month, which caused the share price to rally to their highest in almost three years.

The study by consultancy Xodus suggests that there's up to 21 million barrels of stock tank oil initially in place (STOIIP) at the Upper Portland Sandstone in the Horse Hill-1 and Collendean Farm-1 wells. This is a big upgrade from the 8.2 million barrels expected in December and higher than the latest revised estimates of 20 million barrels.

The English source that said that the field may not be viable said it would be tough to extract oil, perhaps returning only 3 - 15%. In fact, that's the very same range of return in the Bakken in primary production.

The Weald.
Posted by Bruce Oksol at 8:52 AM No comments: