Rusty Braziel, CEO/RBN Energy has a new book out, to be released in early January, 2016, The Domino Effect.

I follow RBN Energy daily and can only imagine how good this book should be, taking off where Daniel Yergin's The Prize ended.

A huge thanks to a reader for alerting me to this book.

When you get to the link, you can actually "look inside" much of the book. A 332-page book for about $20. Interesting.

Our younger daughter got me everything on my Christmas list this year, including the much-talked about, seldom-seen Tesla Model S. 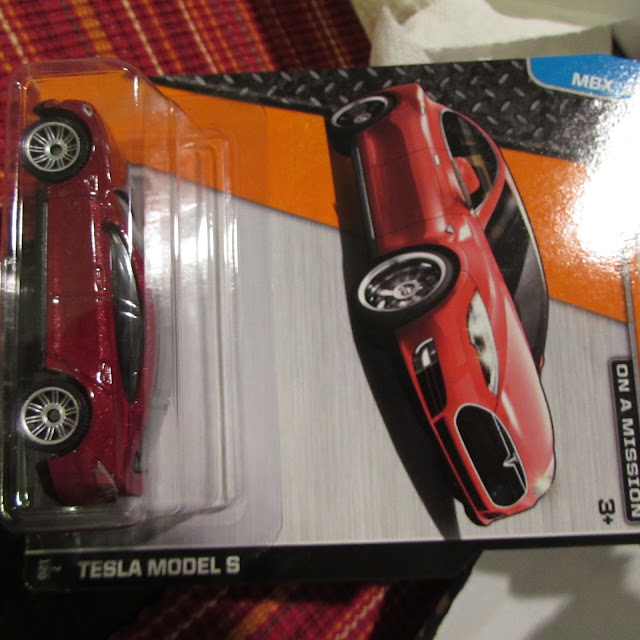 Posted by Bruce Oksol at 7:37 PM No comments:

This is the link. This is a dynamic link and I have no idea how long this view will be available. But for those who grew up in Williston in the 60's through the 90's but have since left, this will bring back some memories.

The best single year for music was 1969; the best decade, the 60's.  This is an interesting set -- considering the list does not include the Beatles, Bob Dylan, or the Rolling Stones.


Greatest Music Hits of the 60's
Posted by Bruce Oksol at 2:56 PM No comments:


This week the first 100 Railcar Unit Train of Sand arrived at the Red River Stony Creek Rail Yard in Williston, ND delivered by the BNSF Railway.

This marks a turning point for Red River’s operations and allows them to better utilize the 5+ miles of track that have been constructed and are currently in place as well as offering a competitive advantage to their customers and thereby generating more jobs in Williston, ND, instead of other possible terminal locations in the Bakken.

“This is a Game Changer for Red River” said Curtis Shuck, Vice President of Business Development.

“It is a good example of how we are continually reviewing and modifying our business model to respond to the needs of our customers in a rapidly changing Oil and Gas Market where at the end of the day, maintaining the lowest landed cost of materials is what our customers are requiring.”

Red River is family owned and has been doing business in Williston, ND since 1978.

This is really quite a story. This is a family-owned business that has been in Williston since 1978 as the press release indicates. What the press release does not say is that the rail yard was pretty much laid down by a small group of men working day-in / day-out without taking any breaks a couple of years ago, and I assume since then, continuing to add on.

This rail yard is just a miles east of downtown Williston and can easily be seen from the bridge across from the old salt mine.


North Dakota is once again leading the nation in population growth, and the number of residents in the state is at an all-time high, according to figures released Tuesday by the U.S. Census Bureau.

That percentage, far higher than the national average, is largely driven by people in search of jobs in oil-rich western North Dakota.

The state has been the nation's fastest-growing for the past four years, and was followed this year by Colorado, the District of Columbia, Nevada, Florida and Texas, according to the new census data.

This is a new term for me: "drill out date." I noted it with this well which will come off the confidential list this weekend and will be reported Monday when everyone gets back to work:
On the geologist's report, the well summary, at the file report, instead of the "Spud Date," the geologist uses the term "Drill Out Date." The drill out date for this well was March 17, 2015, and total depth was reached April 22, 2015.

The narrative states that they reached total for the vertical and the curve in six days and that the lateral was reached (total depth) 13 days from spud. It appears in general, they drill the vertical at two to three feet per minute, whereas drilling the lateral slows to about a foot every two minutes in reports I've seen elsewhere. In this particular well, they reported rates as high as 200 - 250 feet / hour. Trip gases reached as high as 6,926 units in the middle Bakken target, with a a quick 15' to 20'-flare reported on day 4. On the final day of drilling a 15' to 20' steady flare was reported. In this particular file report, the geologist provides a day-by-day summary, again raising the bar on narrative reports (a Neset geologist, by the way).

The well has been fracked; production runs are as follows:

In addition to the change noted above, I am also noting more wells going from DRL status back to CONF status. In these cases, the wells have reached total depth but they have not been completed, or if they have been completed, that information is unavailable because the well is back on CONF sttus. If the well has been fracked, that information would be available at FracFocus.

It also appears that well on DRL status returning to CONF status is often very, very temporary and the well is moved to SI/NC status. I noticed this while updating the Spotted Horn oil field but I think I have seen it elsewhere.
Posted by Bruce Oksol at 11:55 AM No comments:

I'm going to close out the poll in which we asked if we will see less than 50 active rigs in North Dakota this winter?
I am closing it out because we are now starting to see articles discussing the same question.

For the record, my hunch is we get close to 51 active rigs in the first half of 2016, and then rebound to near 60 at the end of the year (2016). I assume drillers are contracting rigs for six months at a time, so whatever the number is at the end of January, 2016, it will be close to the number we see at the end of June (winter weather will result in some day-to-day volatility short term, but that will be background noise). The roughnecks have shown their ability to work through some difficult weather. Fracking is a different story, however.

NWS says 'historic' blizzard could hit Amarillo, Lubbock and parts of the Texas Panhandle, December 26, 2015, 10:30 a.m. Central Time.
Posted by Bruce Oksol at 9:37 AM No comments:

Now that we are all on the same page, see if you can spot the ten differences between those two stories. One was published yesterday, December 25, 2015. The other was published almost a year ago, January 25, 2015.

Both were written by Kirk Johnson.

The only difference I found was the additional information in the more recent article that Alaska has $14 billion set aside:


In one respect, Alaska is also extremely lucky: lawmakers set aside about $14 billion in savings during the fat years, which Mr. Walker has called “a bridge,” which must be trod gingerly. Tapping too little of it, he said, would force even more drastic spending cuts; spending too much could deplete the fund before the crisis has past (sic).

Should it be "past" or "passed"? Whatever.

The state has a population of around 750,000. Each resident gets upwards of $2,000 annually from oil revenue, but to collect it, one must physically be in the state to collect it. This payout is off-budget. Sort of like in a "lock-box."

It will be an interesting story to watch.

In an earlier post I talked about the fascination our youngest granddaughter has for anything with buttons:

The granddaughters flew into Denver Christmas Eve for a long weekend of skiing, based out of Avon, Colorado.

The first night, 17-month-old Sophia somehow managed to set off the carbon monoxide alarm. The hotel staff rushed up to the room, turned off the alarm, but were at a loss to explain how she managed to set it off. My understanding is that most of these devices, like fire alarms, are designed in such a way that if the intake port is obstructed the alarm goes off by default, as a precaution, to alert users that the alarm has been disabled.

They have now moved the alarm to an undisclosed location, somewhere in the bathroom, well out of her reach.

Sophia also was the first one to figure out how to use the hotel room's phone to call down for room service. Because the front desk staff was unable to interpret her "Minion-like" language, they sent someone up to check up on them. 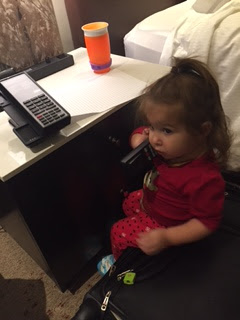 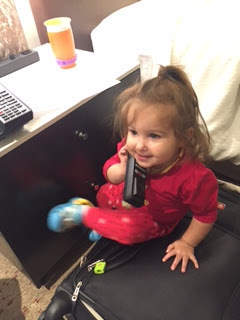 "Yes, two large pizzas, a banana, and a cup of whole milk in a tippy cup."
The phone has now been disconnected from the base and Sophia walks around the room chatting into a disconnected hand-held receiver.
Posted by Bruce Oksol at 8:29 AM No comments: