There are two things folks want in the Apple Watch:
Well, it looks like one of those has been resolved. From Bloomberg:


Apple Inc. is planning to release a version of its smartwatch later this year that can connect directly to cellular networks, a move designed to reduce the device’s reliance on the iPhone.

Currently, Apple requires its smartwatch to be connected wirelessly to an iPhone to stream music, download directions in maps, and send messages while on the go.

Equipped with LTE chips, at least some new Apple Watch models, planned for release by the end of the year, will be able to conduct many tasks without an iPhone in range. For example, a user would be able to download new songs and use apps and leave their smartphone at home.

Yes, this is huge.

Now, about that glucose-monitoring.

Over at The Wall Street Journal.

Paris Climate Accords: US formally tells UN it wants out. Reported at Fox News but not at LA Times or Wall Street Journal. 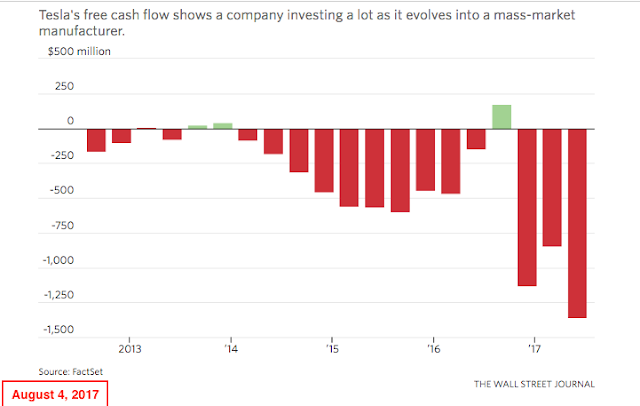 Stock market (the Dow 30) closes at a record high for the eighth day in a row; it is so incredible that when President Trump tweets about it, his tweets are "censored" by Twitter because it is "politically sensitive." That's how good this week has been; that's how incredible the first six months of President Trump's presidency has been. That follows an incredible jobs report, including the jobless rate ticking down to 4.3%. Now, the pundits are concerned there may not be enough "Americans" to fill all the jobs being added by the economy.

ObamaCare: for all intents and purposes, every health insurer, except Blue Cross/Blue Shield has exited the ObamaCare exchanges. And the health insurers who exited early are all hitting new highs on the stock market. Those who exited late are left holding the bag. Ask Molina. Which begs the question: how much longer can BC/BS stick with ObamaCare?

WTI finally hit $50 but dropped back a bit. Pundits were sure that with Venezuela imploding, the US would be "short" heavy oil. I guess the pundits forgot about Canadian heavy oil. It appears Canadian oil imports have hit an all-time record. Meanwhile, despite "cuts" (wink, wink), OPEC imports are still at near record levels. Only 39 weeks until US "re-balances" crude oil stores.

Saudi: may have stopped the bleeding.

An aside: nuclear energy in the US is dead.

Joke of the week: residential electricity sales are falling; EIA is blaming the Bakken.

Energy gap between EU and US widens; four posts:
The Bakken finished a week with eleven more wells coming off the confidential list; they were all DUCs. Drilled, uncompleted.

Bakken Economy
Hiring in the Bakken

Bakken 101
The Pronghorn member
Posted by Bruce Oksol at 10:18 PM No comments:

All day long, pundits have been asking whether President Trump can take credit for the incredible "jobs number." The answer is yes. Why? It was such an incredible good number coming on Trump's six month in office that Twitter actually censored the news about the huge "jobs number." I can't make this stuff up. Trump should feel vindicated. Trump can tweet about this over the weekend.
Posted by Bruce Oksol at 7:17 PM No comments:

Sophia on her final leg home, back to DFW.

Breaking news: after today's great jobs report, CNBC said Treasury yields jumped ... the yield on the benchmark 10-year Treasury notes climbed to 2.266%. So, what was it yesterday? 2.23%. That's quite a jump. On a million dollars, that's $360.

Theme of the day: will there be enough American workers for all the jobs being created? Helloooo.... the labor participation rate is 63%. Now they're worrying about wage inflation.

August 7, 2017: Anthem to "bow out of" ObamaCare exchange in Nevada, Georgia, next year (2018). Cited uncertainty for future of ObamaCare as one reason. Losing money might be another reason.

The other theme of the day: insurers exiting ObamaCare are hitting new all-time highs. This is NOT the time for Congress to get back into the ObamaCare issue. Let ObamaCare run its course.

I'll come back to this later -- the numbers are clearest yet, listen to the numbers for yourself; enlightening:

Cigna CEO: Obamacare marketplace remains ‘challenging’ for 2017 and 2018 from CNBC:

Trolling: Newsweek cover? Trolling. No better than a blog. Talk about poor timing -- suggesting Trump administration not doing anything -- when market hits a new record high for the 34th time this year (?).
Posted by Bruce Oksol at 8:31 AM No comments:

July 22, 2018: the graphic has been added; production data has been updated: 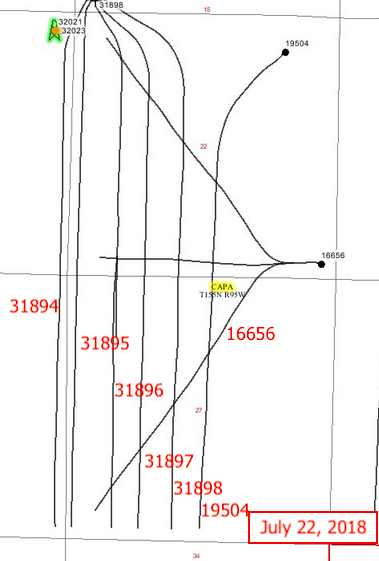 July 22, 2018: FracFocus has no data that this well was re-fracked. Recent production profile:


Original Post
The well:
This is a great well. It was taken off-line in June, 2017, suggesting to me that XTO may be planning on fracking in the area. If there is new activity in the area, it will also be interesting to check in on XTO's Linda 41X-22, #19504 at the same time.

The wells likely to be fracked are all on the SI/NC list. Easternmost of the three or four wells of interest is XTO's JMB 14X-15B, #31898.

Taking a closer look at the wells in the area under discussion, it is interesting that a neighboring well, XTO's Linda 41X-22, #19504, had a similar bump at the very same time (1/12) even though the well was fracked almost a year earlier. Note: Linda is a Three Forks well. Hazel is a three-lateral Middle Bakken well.

I have a hunch that explains the jump in production in both Linda and Hazel in 8/12 but that's way beyond my headlights, so no comments. And don't ask. 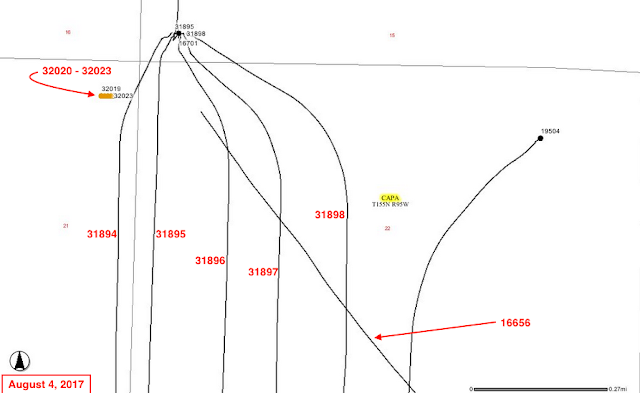 Whoo-hoo! SRE beats. And it's a huge beat. EPS, $1.10 and that's a 23-cent beat. Not trivial. Top line beats by $70 million. Press release here. Wanna bet they mention Mexico? It's an open-book test, and RBN Energy is the primary text.

For the first six months of 2017, Sempra Mexico had earnings of $39 million, compared with $75 million in the same period last year.

US oil production: US production at its highest since July, 2015, and shale producers like EOG Resources are boasting higher production targets in their earnings reports. And producing more for less.

Futures: up again. All indices in the green, pre-market. Dollar continues to fall; now $1.18 per euro. In Britain, $1.31 will buy you a British pound. I remember paying $1.64 for a British pound when we were stationed there years ago. In 2008, it took almost $2 to buy a British one-pound coin. Ouch.

Trump rally: it's all about the ten-year Treasury. Down to 2.23%. KMI offering $1.2 billion in notes in refinancing effort: 5.5% coupon bonds with notes likely to yield around 3.2%. Wow. Would it surprise anyone if Apple did the same thing? LOL. A quarter-trillion dollars in cash. 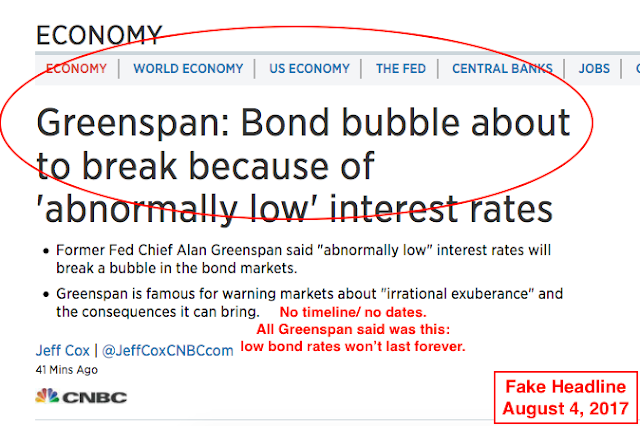