April 25, 2016: follow-up to the original post here; the oil was from near Tioga; ended up in the Netherlands where XOM has a refinery.


Hess Corp on Friday confirmed it sold Bakken crude for export out of the U.S. Gulf Coast to Europe, the first reported shipment of the light North Dakota oil since Congress lifted the ban on exporting crude last December.

Hess sold 175,000 barrels of Bakken crude, which loaded at St. James, Louisiana, in early April and is being transported to a European refinery, spokesman John Roper said in an emailed statement. 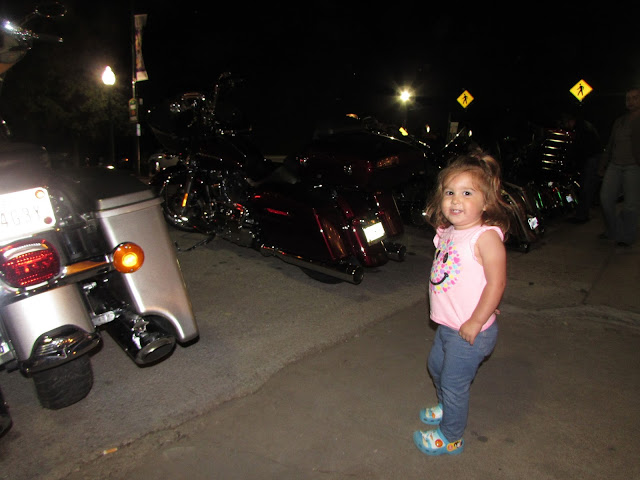 In front of Willhoite's, checking out all the motorcycles -- 10:00 p.m. Friday night, Grapevine, TX, Main Street.
Posted by Bruce Oksol at 6:54 PM No comments:

I missed this one earlier this year; celebrating its 50th anniversary:
Recent production:

The insurer won’t sell policies through Michigan’s ACA exchange for next year, according to Andrea Miller, a spokeswoman for the state’s Department of Insurance and Financial Services. Georgia and Arkansas said last week that UnitedHealth will quit their exchanges for 2017.

UnitedHealth, the largest U.S. health insurer, began warning in November that it was losing money on its Obamacare policies and might exit some markets. The ACA relies on private health-insurance companies to offer policies that individuals can buy in government-run markets. Though it was selling plans in many states, UnitedHealth is a smaller player in ACA markets than rivals like Aetna Inc. and Anthem Inc.

The Hill is reporting that ObamaCare losses are unsustainable.


Health insurance companies are amplifying their warnings about the financial sustainability of the ObamaCare marketplaces as they seek approval for premium increases next year.

Insurers say they are losing money on their ObamaCare plans at a rapid rate, and some have begun to talk about dropping out of the marketplaces altogether. [United Health, the nation's largest healthcare insurer, has announced it will drop out.]

“Something has to give,” said Larry Levitt, an expert on the health law at the Kaiser Family Foundation. “Either insurers will drop out or insurers will raise premiums.”

While analysts expect the market to stabilize once premiums rise and more young, healthy people sign up, some observers have not ruled out the possibility of a collapse of the market, known in insurance parlance as a “death spiral.”

In the short term, there is a growing likelihood that insurers will push for substantial premium increases, creating a political problem for Democrats in an election year.
Insurers have been pounding the drum about problems with ObamaCare pricing.

And a report from McKinsey & Company found that in the individual market, which includes the ObamaCare marketplaces, insurers lost money in 41 states in 2014, and were only profitable in 9 states.

“We continue to have serious concerns about the sustainability of the public exchanges,” Mark Bertolini, the CEO of Aetna, said in February.

The Aetna CEO noted concerns about the “risk pool,” which refers to the balance of healthy and sick enrollees in a plan. The makeup of the ObamaCare risk pools has been sicker and costlier than insurers hoped.

The clearest remedy for the losses is for insurers to raise premiums, perhaps by large amounts — something Republicans have long warned would happen under the healthcare law, known as the Affordable Care Act (ACA).

“The industry is clearly setting the stage for bigger premium increases in 2017,” said Levitt of the Kaiser Family Foundation.

Insurers will begin filing their proposed premium increases for 2017 soon. State regulators will review those proposals and then can either accept or reject them.
Michael Taggart, a consultant with S&P Dow Jones Indices, pointed to data from his firm showing per capita costs for insurers are spiking in the ObamaCare marketplaces.

“We made a significant change in the rules with the ACA, and we're still working through the process to see how that market stabilizes,” Taggart said at a panel on Wednesday. “Is [a death spiral] a possibility? Sure it's a possibility. I wouldn't attempt to put a probability on it, because I think there are a lot of things going on.”

One factor helping to prevent a death spiral is ObamaCare's tax credits, which cushion the impact of premium increases on consumers.

“What we're likely to see is more of a market correction than any kind of death spiral,” Levitt said. “There are enough people enrolled at this point that the market is sustainable. The premiums were just too low.”

As I've said before: by any measure ObamaCare is a debacle. Anyone still supporting ObamaCare is a) not paying attention; b) is a bit dull-witted; c) is making money off the scam; d) is a political demagogue; and/or e) is gaming the system.

One can suggest that the health care insurers are exaggerating the situation, but United Health, the nation's largest insurer has already dropped out of ObamaCare; others will follow.

But the fact that the largest or second largest (competes with Boston Consulting) consultant company and the most prestigious consultant company, McKinsey & Company, found that in the individual market, which includes the ObamaCare marketplaces, insurers lost money in 41 states in 2014, and were only profitable in 9 states.

Speaking of unsustainable: Los Angeles and a $15-minimum wage: the exodus has begun. The Los Angeles Times is reporting:


Los Angeles was once the epicenter of apparel manufacturing, attracting buyers from across the world to its clothing factories, sample rooms and design studios.

But over the years, cheap overseas labor lured many apparel makers to outsource to foreign competitors in far-flung places such as China and Vietnam.

Now, Los Angeles firms are facing another big hurdle — California's minimum wage hitting $15 an hour by 2022 — which could spur more garment makers to exit the state.
Last week American Apparel, the biggest clothing maker in Los Angeles, said it might outsource the making of some garments to another manufacturer in the U.S., and wiped out about 500 local jobs. The company still employs about 4,000 workers in Southern California.

"The exodus has begun," said Sung Won Sohn, an economist at Cal State Channel Islands and a former director at Forever 21. "The garment industry is gradually shrinking and that trend will likely continue."

In the last decade, local apparel manufacturing has already thinned significantly. Last year, Los Angeles County was home to 2,128 garment makers, down 33% from 2005, according to Bureau of Labor Statistics data. During that period, employment also plunged by a third, to 40,500 workers. Wages, meanwhile, jumped 17% adjusting for inflation, to $698 per week — although that can include pay for top executives, as well as bonuses, tips and paid vacation time.

Many apparel companies say Los Angeles is a difficult place to do business. Commercial real estate is expensive and limited, the cost of raw materials continues to rise and it can be difficult to find skilled workers who can afford to live in the city. They expect things will become even more challenging after the minimum-wage hike further raises their expenses.

Close reading of the story suggests that the $15-minimum-wage is simply the last straw. The apparel industry was already on its way out. It's all for "the better." Those that have jobs will be paid more. The state will take care of the others. Bernie will see to it that no one is left behind.

Not to be outdone:  Democratic presidential candidate Bernie Sanders' tax return shows he gave 4% of income to charity, effective federal tax rate is 13.4%.
Posted by Bruce Oksol at 12:21 PM No comments:

Please disregard this post. I have updated the information and re-posted the data here: http://themilliondollarway.blogspot.com/2016/04/twenty-20-top-oil-fields-in-north.html.

The following was done quickly and there are likely to be factual and typographical errors. I will triple-check this spreadsheet later and make corrections.


This spreadsheet is ordered on the basis of the production / well / for the month of February. The last column in each 4-column series refers to total monthly production from the particular field, not the production average from each well in that field.