January 1, 2019: in the original post I was going to note that despite low number of permits and low number of active rigs, production is setting all-time records. It was great to see that a reader did that for me. See comments. I've brought the comment up here for easier access:

It will be very, very close, but I'm still seeing a chance that we will finish 2019 (December, 2019, monthly data) with a 13-million-bopd in production.

Natural gas production is comfortably over 100 BCF/d total withdrawals, lower 48, at 105.1 BCF/d. (I don't count Alaska production since it is just reinjected.)

LA just popped over 9 BCF/d and is a hair away from breaking its November, 2011, record.

The peak oil/gas folks have been reduced to saying growth is "too slow" or "about to turn" since they've been boot-stomped by actual production, hitting new records almost every month.

Search on the blog: "doofus-in-chief."

So, how did that turn out?

I'll have a breakdown of the permits by operator, field, etc., later.
Posted by Bruce Oksol at 5:34 PM 2 comments:

When conditions warrant, the constraint allows Cal-ISO to limit the amount of natural gas that can be burned by power plants in the Southern California Gas and San Diego Gas & Electric regions.


Cal-ISO was previously authorized to use the tool on a temporary basis. The Federal Energy Regulatory Commission Monday approved the grid operator's October 31 proposal (ER20-273) to make permanent three tariff provisions associated with the constraint.

One of the tariff provisions authorizes enforcement of the constraint, while another gives Cal-ISO the authority to override competitive path assessments based on actual system conditions in order to deem certain transmission constraints uncompetitive when the gas constraint is enforced. The last provision permits Cal-ISO to suspend virtual bidding if the bids are introducing adverse market outcomes in conjunction with the use of the gas constraint.


Available gas capacity to serve customers based on best and worst case scenarios for pipeline supplies coupled with potential storage field utilization ranges from 3.77 to 4.11 Bcf/d with the support of Aliso Canyon, and 3.20 to 3.54 Bcf/dD if Aliso Canyon supplies are unavailable, according to the assessment.


Under no scenario does SoCal Gas expect to have adequate supplies to handle the 1-in-10-year cold day demand forecast, which would prompt curtailments of core customers. But the utility "does not believe ... that core service is at risk this winter season" because, with the exception of the worst case pipeline supply scenario without Aliso Canyon, supplies are projected to be sufficient to meet the 1-in-35-year peak day demand, the report said.

What a great way to finish the year, and the decade!


The last six permits issued by the NDIC in 2019 are CLR permits. Also, really cool, these are in the name of a pharmacist I knew very, very well when I was growing up in Williston. And, finally, several years ago, a reader asked "when" there would be more "Irgens Rexall" wells. I had no idea, of course, but I assured the reader there would eventually be more "Irgens Rexall" wells. Well, here they are.

I haven't read this article closely and entirely, but what little I have read is quite fascinating. Archived.

Why The Saudis Suddenly Agreed To This Mega Oil Deal -- Simon Watkins, oilprice.

I'll get back to this later.
Posted by Bruce Oksol at 2:07 PM No comments:

This page will not be updated. These wells are followed elsewhere.

Wells of interest in this area:

Shale: making America great! I find this absolutely fascinating on so many levels -- US exports of petroleum products to Canada and Mexico: 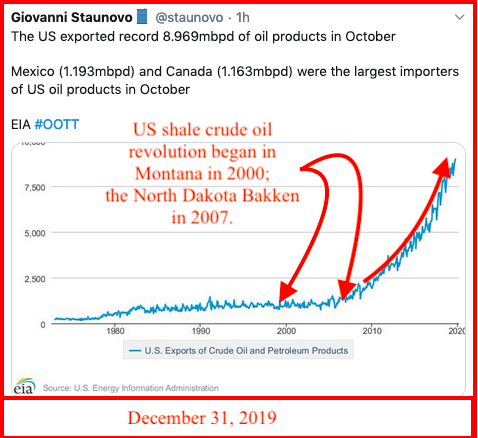 Reality check: while Bezos, Elon, et al are talking about building cities on Mars, China is doing that here on Africa ... now. My hunch: we'll have a city in Africa with ten million Chinese before we have 25 earthlings living on Mars. [But hopefully, the first 25 will include St Greta the Exploited.]

Idle rambling: twenty-four more hours (actually less) for Rocket Man to act. I suggested a few days ago that connecting the dots would perhaps suggest why North Korea did not send the US the "Christmas present" that was promised. Here's one of those dots:

US Embassy in Iraq: Iran taking a page out of their 1979 playbook. Two observations:

I'm still fascinated by the changing landscape of the investment world. Absolutely fascinating.


Schwab is the industry leader and largest custodian of Registered Investment Advisor (RIA) assets,1 providing custodial, operational, practice management, and trading support to more than 7,500 independent RIA firms. For over 30 years, we have worked resolutely with independent advisors to develop proven processes and insights for starting, building, and growing their firms.

Meanwhile, apparently Merrill Lynch is getting out of the business. From RIABiz:

That seeming revenue ceiling makes cutting costs mandatory for earnings growth, and that's why -- finally -- the bumbling Merrill Lynch RIA custody unit is getting the ax. At least, RIAs say that's what BofA is telling them. It sure is an ignominious end to a concept that had two good reasons to live. It gave Merrill Lynch a way to retain brokers who would otherwise migrate to Fidelity, Schwab, TD, or other custodians.

It also gave Merrill a head start on a post-apocalyptic future when brokers go extinct -- a time that admittedly never seems to arrive. This BofA move pretty much puts three of top four wirehouses at square one-- or square zero-- in RIA custody. Only Wells Fargo, tentatively, is heading in the opposite direction. (See: Wells Fargo finally gives its 600 hiring managers an RIA channel to sell but still with the Trade-PMR brand) It has a partnership with TradePMR that is retaining Wells Fargo brokers -- perhaps because it is content to accept the slimmer margins of a clearing relationship.

It will be interesting to see where Schwab heads after the merger/buyout of TDAmeritrade.

I hear that the DFW metroplex is the world's largest "center" for Amazon fulfillment/distribution centers. Apparently there are 17 Amazon "distribution centers" in the DFW metroplex. It has an air hub north of Fort Worth, TX, the Alliance Airport; connections with the old Redbird airport south of Dallas; and, operations out of DFW International Airport. That from a life-long logistics professional who stops by Starbucks on a regular basis. Three centers within a bicycle ride of our little hovel: Amazon Fulfillment Center DFW6; Amazon FTW2, and USPS, all three just north of the DFW airport.

With regard to the Alliance Airport, more here.

Slogging through The Anarchy: The East India Company, Corporate Violence, and the Pillage of An Empire, William Dalrymple, c. 2019.

Page 138 of 397 pages of text.  We've come to the end of the Plassey Revolution. The wiki snapshot:


The Battle of Plassey was a decisive victory of the British East India Company over the Nawab of Bengal and his French allies on 23 June 1757, under the leadership of Robert Clive which was possible due to the defection of Mir Jafar Ali Khan.

The battle helped the Company seize control of Bengal. Over the next hundred years, they seized control of the entire Indian subcontinent and Myanmar.

Plassey? Anglicized form of Palashi, a city in the West Bengal district of India. West Bengal is in the far northeast corner of India.


What the people of England did understand very clearly was the unprecedented amount of money -- or to use the newly Anglicised word, loot -- that Clive was bringing back with him. Not since Cortés had Europe seen an adventurer return with so much treasure from distant conquests.

It is amazing that a company of maybe a dozen owners/principal shareholders "conquered" India, and no one really knew what was going on.

By the way, this explains the "Plassey" one sees on maps of London, and England in general.
Posted by Bruce Oksol at 8:16 AM 2 comments:

Observations from the list above:
Denton: just north of where we live; the population center of the DFW metroplex is predicted to move to this area -- pretty amazing.

Denton is just northeast of the Fort Worth Alliance Airport --


In a bid to strengthen its delivery services, Amazon.com, Inc.,plans to open a regional air hub at the Fort Worth Alliance Airport, which is expected to commence its operations from 2019. This new air hub is also expected to create multiple job opportunities for North Texas residents. Fort Worth Alliance Airport is west of Grapevine, well north of Fort Worth, off I-35W, south of the Texas Motor Speedway and south of  ... yes ... Buc-ee's!


December 2019 U.S. crude oil production soared 1.1 MMb/d above this time last year to 12.8 MMb/d. It’s a similar story for natural gas, with Lower-48 production climbing to 95 Bcf/d, up 6 Bcf/d over the year. That’s a little off the breakneck growth rate of 2018, but still quite healthy, even in the context of Shale Era increases. And it all happened in the face of continued infrastructure constraints, crude prices that fell from the mid-$60s/bbl in April to average $55/bbl from May through October, and gas prices that in several months were crushed to the lowest level in 20 years. It’s all too much supply to be absorbed by the U.S. domestic market. And that means more pipes to get the supply to the Gulf Coast and more export facilities to get the volumes on the water. What has all this meant for the market’s response to these developments? Well, at RBN we have a way to track that. We scrupulously monitor the website “hit rate” of the RBN blogs fired off to about 28,000 people each day and, at the end of each year, we look back to see which topics generated the most interest from you, our readers. That hit rate reveals a lot about major market trends. So, once again, we look into the rearview mirror to check out the top blogs of the year based on the number of rbnenergy.com website hits.