I was just getting ready to sign off for the night. I posted my last note on the blog for the day. I was going to check my e-mail and then close the MacBook Air and watch a little football, read a bit.

And then I find this in my e-mail. A note from a reader with the link to this video:


There are so many story lines here.

It is impossible to articulate the "mind-set" of military surgeons. I certainly do not "understand" them. They are beyond my comprehension.

Age "goes out the window."

In this video, we watch a 60-year-old orthopedic surgeon join the military and serve as a combat orthopedic surgeon -- his comments about the lone piper are profound. During my 30 years in the service, a lone piper seemed to appear in the most unusual and unexpected places, perhaps only a handful of times, but always when least expected and most needed.

A huge thanks to the reader for sending me the video. It really, really means a lot.

Lots of memories.
Posted by Bruce Oksol at 8:45 PM No comments:

For newbies, this is a good example of a Bakken life-cycle:
This well was recently re-fracked:
The re-frack resulted in a max production of 27,368 bbls in one month; the original frack resulted in max production of 27,119 bbls in one month.  To the best of my knowledge, based on what readers tell me, we do not see this in conventional wells. This is like getting a brand new well for free except for the cost of the re-frack.

Full production profile at this post.
Posted by Bruce Oksol at 8:06 PM No comments:

Was this well re-fracked? Nope.

I didn't think this was supposed to happen. All the "peak oil" folks and the "conventional oil" folks tell me that once a well starts declining, one shouldn't see a jump in production (during primary production). But here we have yet another example of the "Bakken phenomenon."
Posted by Bruce Oksol at 7:45 PM No comments: 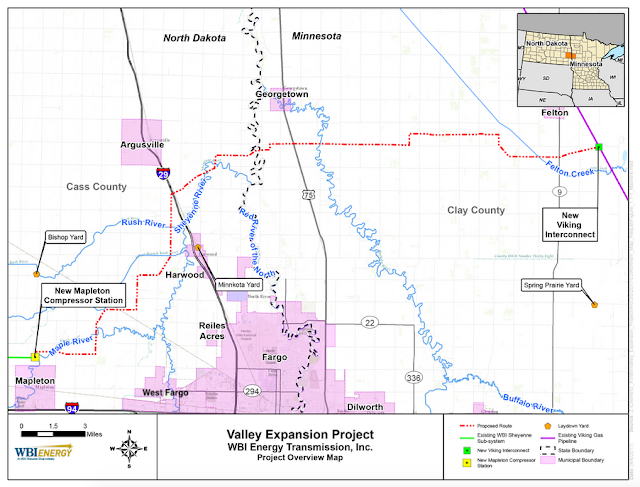 Note: Don noted the huge size of the compressor -- 3,000-horsepower electric-driven compressor station. From this site:

So, if I understand this (and I don't) correctly, the "median size" tends to max out at 2600 horsepower. The MDU compressor in this story: 3000 horsepower.
Posted by Bruce Oksol at 4:50 PM No comments:

First, a little background, because I think the route will be along some of the existing easements.

To get an idea of the geographical area we're talking about, you may want to take another look at this noted posted just a few days ago regarding "the Voyager."

From the BusinessWire, a Berkshire Hathaway Company:
Now the news from Phillips 66 released on November 9, 2018:
In that same press release, Phillips 66:

I suppose if you want to read the article (at this link), you can. But it's the same old thing. Bottom line: Keystone XL construction has been stopped, putting hundreds of hard-working, salt-of-the-earth men and women out of work.

The US district judge announced his ruling two days after the mid-term elections in which the Democratic candidate for US Senate won by a very, very narrow margin.

Posted by Bruce Oksol at 1:55 PM No comments: