The new plant comes after Trump escalated criticism of Toyota in January, threatening to implement a border tax if the company did not invest in U.S. production. Toyota announced plans in January to invest $10 billion in U.S. operations over the next five years.

Over the decades, Toyota has developed a massive footprint of plants in the U.S. It includes factories in Kentucky, Alabama, West Virginia, Texas and Indiana, from which it exports more than 160,000 vehicles annually to 40 countries. 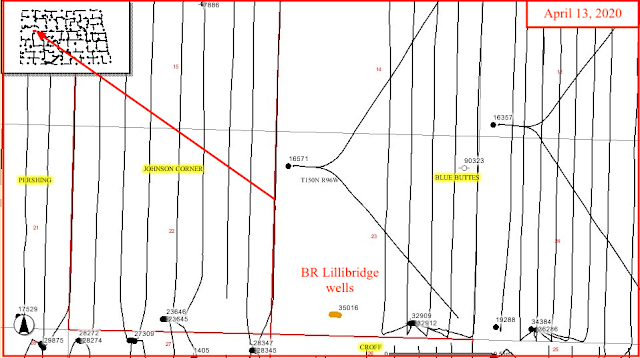 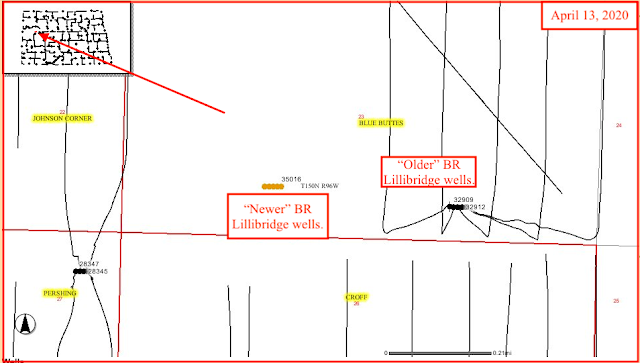 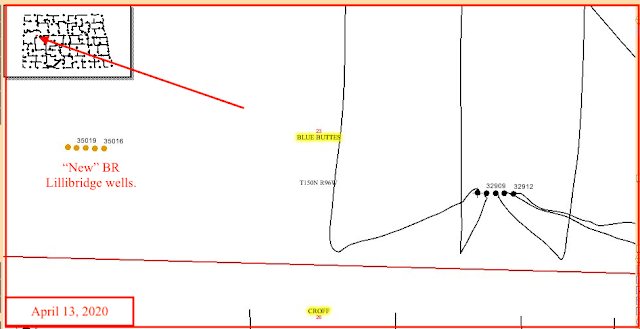 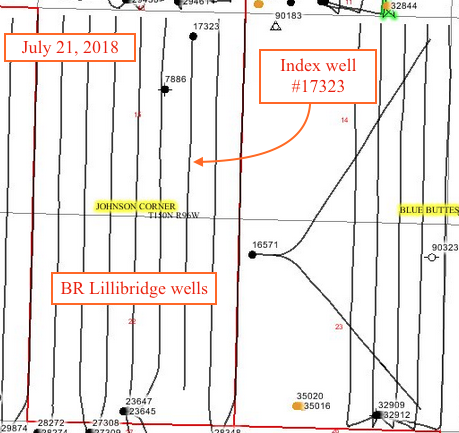 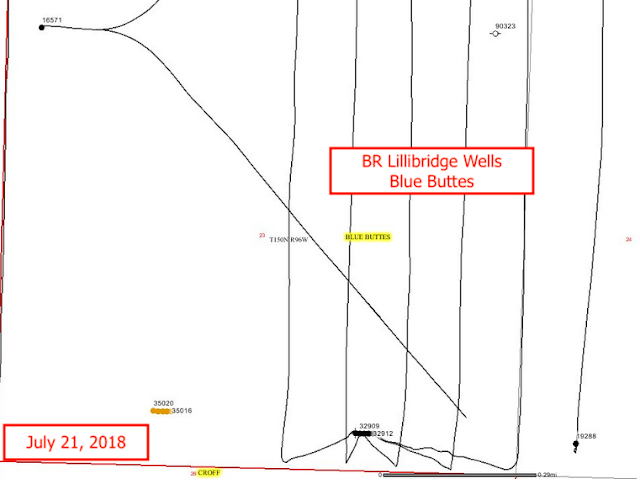 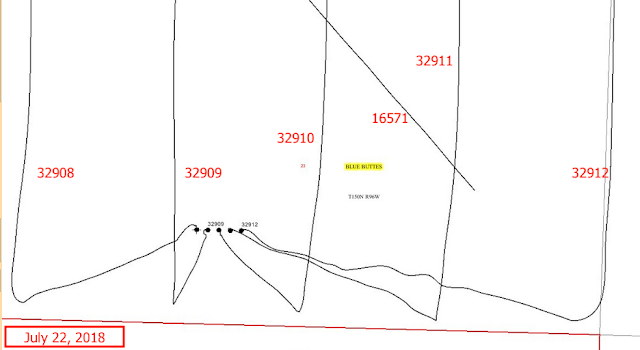 Like him, hate him, this was a historic moment on Wall Street. I feel fortunate to have seen this live. I was most impressed how calm Erin remained calm/composed in the presence of what  appeared to be a mad man breaking down on live television. My biggest disappointment: Erin moved on.

Don't quote me on this but it appears NFL football will be aired on NBC tonight -- 7:00 p.m. Central, Dallas Cowboys at Arizona Cardinals. Pre-season. Break out the edamame and Suntory. LOL. If only. Edamame, yes. I can't afford Suntory.

Will this be the theme song? 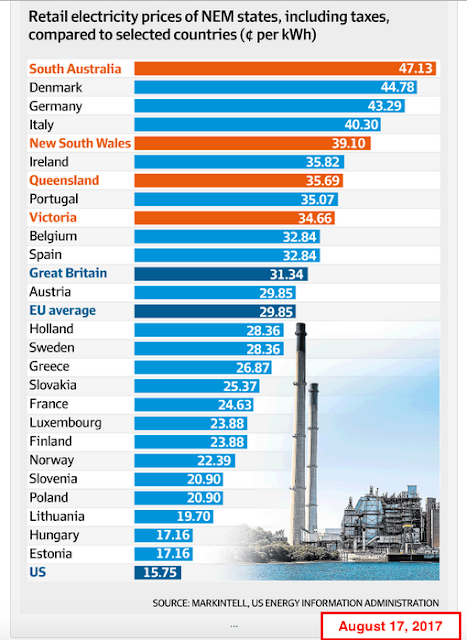 Later, 3:41 p.m. Central Time: see comments. Connecticut proposing "conservation fee" (aka, a new tax) on heating oil for those who use heating oil to heat their homes.

If I did not blog, I would not have known this: the highest electric rates in the world are in Denmark.

For new plants/farms:
Who has a lot of off-shore wind? Denmark.

Which country has the highest electric rates? Oh, I already noted that.

Now this: South Australia now has the highest electric rates in the world. Absolutely crazy; Australia is energy-rich; why in the world did it get sucked into this fad? Musk Melon said he could solve Australia's problem in less than 100 days. From the linked source:


As of July 1, 2017, electricity prices in the state of South Australia are the highest in the world, exceeding Denmark’s due to price increases of between 15.3 and 19.9 percent by its three major electric utilities.

In nearby New South Wales the problem is not much better, with more than 60,000 households at risk of having their power cut off because they cannot afford the bills.

Further, South Australia is faced with the possibility of brownouts and blackouts due to the intermittency of wind power. During a power outage last September, electricity prices rose to 200 cents per kilowatt-hour—about 20 times higher than the average U.S. electricity price. The blackout, which impacted 1.7 million people, started when a wind farm suddenly stopped providing 200 megawatts of power and destabilized the grid. Despite the blackout and high prices, South Australia plans to invest another $100 million in renewable energy.

The shut down of the coal-fired generator at Port Augusta last year destroyed a supply of affordable energy for the state’s households and businesses.

Major businesses in South Australia have threatened to suspend operations entirely until the electricity price is lowered and some smaller operations have already closed.

There is so much more at the link, but this is a good start.

Huge interview with the Aetna CEO on CNBC. Something tells me the mainstream media is starting to see the failure of ObamaCare.

Aetna will pull out of ObamaCare in all states by 2018.
Posted by Bruce Oksol at 2:26 PM No comments:

Andy Hall, the oil trader sometimes known in markets as “God,” is closing down his main hedge fund after big losses in the first half of the year.

Hall shot to fame during the global financial crisis when Citigroup Inc. revealed that, in a single year, he pocketed $100 million trading oil for the U.S. bank. His career stretches back to the 1970s and includes stints at BP and legendary trading house Phibro Energy Inc., where he was chief executive officer.

“Andy Hall is one of the grandees of oil trading,” said Jorge Montepeque, a senior vice president of trading at Italian energy major Eni SpA.

Hall is the latest high-profile commodity hedge-fund manager to succumb to the industry’s low volatility and lack of trending markets. At least 10 asset managers in natural resources have closed since 2012. Goldman Sachs reported its worst-ever result trading commodities in the second quarter. [One reader of the blog frequently suggested GS was often talking its own book, seemingly trying to move the market for its benefit, not necessarily the benefit of the customer.]

Oil hedge funds such as Astenbeck wagered earlier this year that production cuts led by Saudi Arabia and Russia would send prices climbing. Yet, their bets backfired as U.S. shale producers boosted output and Libya and Nigeria recovered from outages caused by domestic disturbances and civil war. [And the fact that Saudi Arabia simply emptied some of its above-ground storage and never did cut exports -- until recently?]

Later, 7:10 p.m. Central Time: see comments. Microsoft considers its Surface to be a "laptop" and not a "tablet" according to the TV commercial preceding the NFL's opening Thursday Night Football game, August 3, 2017, in Canton, Ohio.


Original Post
This begs the question: who are all "the others" selling "tablets"?


Apple shipped an estimated 2.8 million Apple Watch units in the June quarter, an increase of 56 percent from an estimated 1.8 million shipments in the year-ago quarter.

"Sales of Apple Watch were up over 50 percent in the June quarter," said Cook. "It's the number one selling smartwatch in the world by a very wide margin."

I particularly liked the graphic I put together using a couple of Apple graphics: 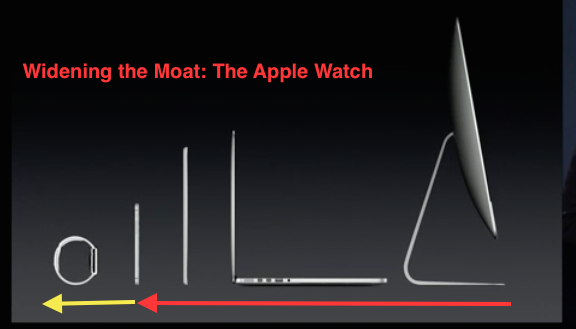 According to Cook, production capacity has been bumped up, but because of the high level of demand, Apple is still unable to make enough to reach supply/demand balance.


We're also seeing incredible enthusiasm for AirPods. 98 percent customer satisfaction based on Creative Strategy's survey. We have increased production capacity for AirPods and are working very hard to get them to customers as quickly as we can, but we are still not able to meet the strong level of demand.

Priced at $159, Apple's AirPods are wire-free earphones that feature Bluetooth and an Apple-designed W1 chip for a better connection and simple transfers between different devices. AirPods are equipped with an infrared sensor to detect when they're in the ear, and they support a range of touch-based gestures.

Posted by Bruce Oksol at 1:02 PM No comments:

It appears US gasoline demand has hit a new record.

Weeks in which gasoline demand exceeded an average of 9.8 million bopd: 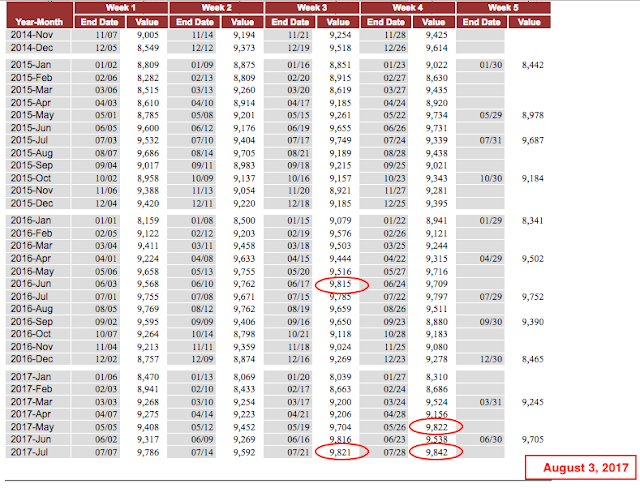 US refineries are, in general, optimized for heavy oil. Heavy oil sources for the US:
As Venezuela implodes and questions arise over reliability of Venezuelan crude oil, it may be interesting to follow Canadian crude oil imports (into the US). 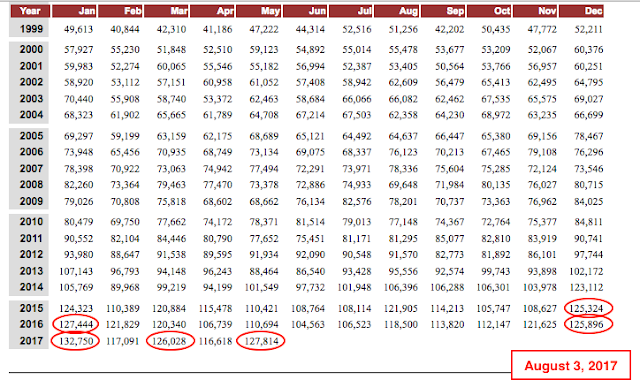 Over 125 million bbls/month:
The Keystone XL? Not critical but it would be nice.

This might take a second or two to re-fresh:

NRG: reports a loss of $1.98. NRG shares have doubled since the beginning of the year; the stock has increased 78% in the last 12 months. Today, NRG is up over 3% in pre-market trading.

APA: misses but reports a profit of $1.50 vs a loss in the same period a year earlier. APA down about 2% in pre-market trading.

Venezuela, not much change. 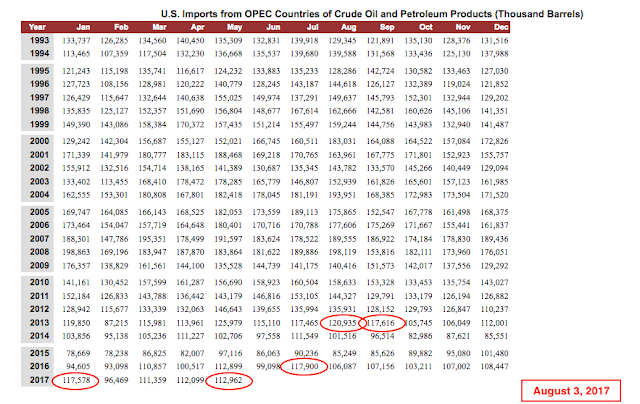 Foxconn considering a second Wisconsin facility; this one in Dane County, second-most populous county in Wisconsin; Madison is the Dane County seat.

ObamaCare: Molina health insurer; darling of the ObamaCare supporters; citing huge losses has exited Wisconsin and Utah; will leave at least one county in Wisconsin with no insurers. Molina will cut 1,500 jobs.Will increase rates sharply in markets Molina still serves.


Molina, a major player in Medicaid health plans and the ACA, fired Chief Executive Officer Mario Molina and Chief Financial Officer John Molina in May. The company is still searching for a permanent leader as interim CEO Joseph White, who is also the finance chief, takes action to improve results. White told investors the company failed to properly prepare for an influx of customers over the past several years fueled by the Affordable Care Act.

More ObamaCare: Link here. Rachel Maddow will not be covering this story.