Twitter is getting excited about Canadian oil stocks. Despite the Keystone XL being killed.

This is being posted for the archives. This has nothing to do with recommendations. 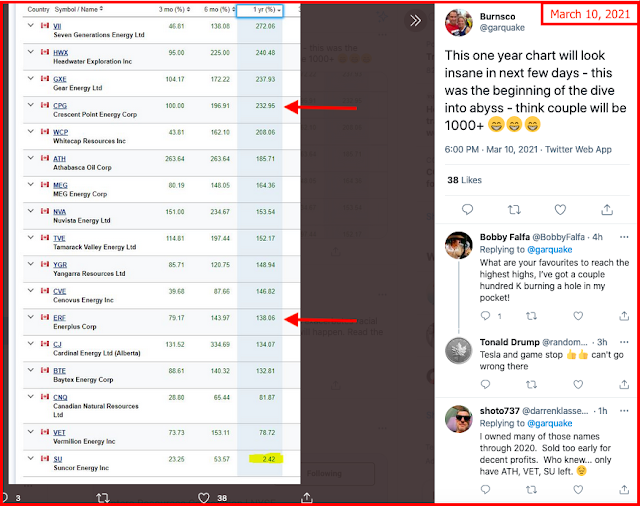 Email ThisBlogThis!Share to TwitterShare to FacebookShare to Pinterest
Labels: Canada

For archives only; no recommendations.

$1.9 trillion stimulus bill signed by the president, although he may not remember.

Inflation? Nope. Link here. No inflation unless ....  Stay away from these four and you won't see any inflation:

Crisis at the southern border? Nope, if you don't look for it. Yesterday, I looked specifically to see if the LA Times reported any story from the southern border. None. So, apparently it's just a Fox News story. I have no dog in that fight.

Gasoline inventory, link here, under President Biden -- in less than 100 days -- quite a feat ... 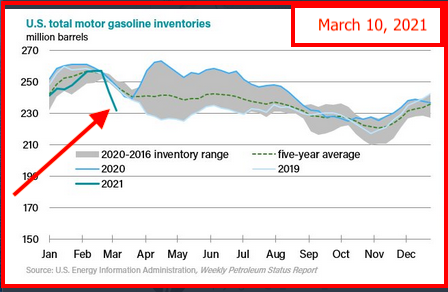 Most misleading story line ever, from the Biden administration: US natural gas consumption was lower in 2020 in all sectors except electric power. Link here. If not misleading, I have no idea what their point was. 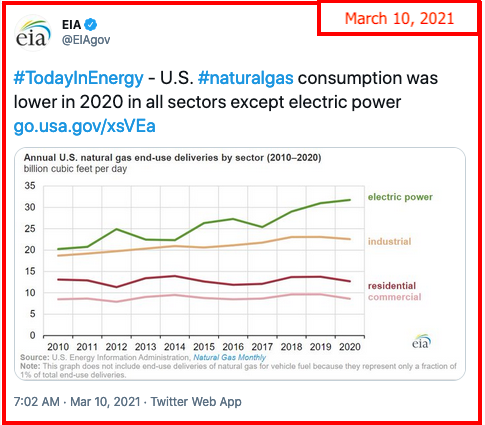 This is really cool.

For the past couple of days I've been in one of my John Fogarty / CCR phases, binge watching CCR on YouTube.

Now this, today in The WSJ: John Fogarty on the devil beind CCR's Bad Moon Rising. How the 1969 hit for Creedence Clearwater Revival was inspired by hippie astrology, Elvis and a 1941 movie. Link here.

I remember those articles written by millennials with Brit Lit / journalism degrees some years ago breathlessly reporting that Cushing storage was filling up and the world as we knew it was coming to an end. So, in the past two weeks, when crude oil inventories increase/decrease by one to five million bbls, crude oil in US storage increased by more than 35 million bbls -- perhaps much more. And I haven't read one story in which folks are concerned about running out of storage. And WTI is holding above $60. And OPEC basket is surging. The world needs that heavy oil now that Canada and Mexico can't supply it.

The weekly report can be interpreted many ways, I suppose, but it becomes an even more interesting report when taken in context.

If I get caught up, I will put the report in context. It might explain why WTI is holding above $60 despite the build.

Over at oilprice.com, a contributor suggests why:

Here are my top three reasons why gasoline is headed for $3.00 / gallon:

Net worth: does anyone really believe this? Link here. For US households with age of head of family, 65 to 74 years of age: 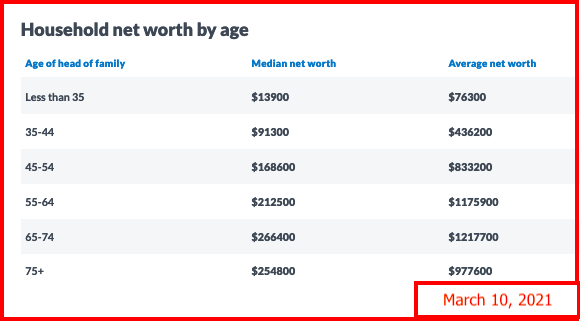 Last year served as something of a bellwether for what’s to come for the Northeast gas market in the long term: increasing takeaway pipeline constraints and weakening gas price differentials by mid-decade. The region’s outflows surged to record highs in the fall of 2020 as production also reached fresh highs. Just a couple weeks ago, the region notched another milestone on the pipeline constraint yardstick: record outflows on some pipes and near-full utilization of southbound routes on the coldest days of winter — something we don’t normally see, as gas supply requirements in the Northeast peak with heating demand and less gas is available to flow out of the region. This time, the surge in outflows and the resulting constraints were driven more by spiking demand and gas prices downstream than by oversupply conditions at home, but the result was the same: the Northeast had by far the lowest prices in the country. This happened even as other regions recorded triple-digit, all-time high prices. Today, we examine how Appalachia outflows and takeaway capacity utilization shaped up during Winter Storm Uri.

We live in a two-bedroom apartment in north Texas, a mile or so from DFW airport, north of Ft Worth, northwest of Dallas.

We were certainly in the epicenter of the Texas February Freeze.

Readers probably heard all about the high energy bills that Texans were facing following the Texas Deep Freeze, February 15, 2021 - February 19, 2021.

I was certainly eager to see the bill. We lost power for those four days, and I used very little power before and after those days. I have not turned on the heat since February 15 (the day we lost power) except for one eight-hour stretch on February 20, 2021.

I'm not quite sure why our electricity usage was so high considering I did not turn on the heat at all, but we did have drying fans placed in the apartment for several days operating 24/7 to dry the walls.

[They removed the baseboards throughout the apartment, removed the carpet and padding, and cut out the sheet rock (the walls) from the floors to about two feet above the floor to hasten the drying process.]

I assume the heating fans and the "destructive carpentry" accounted for a lot of the electricity. In addition, I did a lot of washing and drying of towels that I used to soak up water from the carpet before the carpet was finally removed.

We moved into the apartment during the summer of 2013.

Except for one winter, back in 2015 or thereabouts our winters have been very mild, until this year.

I used to be quite miserly using electricity; I watched it closely. However, starting about three years ago, I became a lot less concerned. I've noticed that the monthly bill does not vary a lot whether I watch electricity very closely or just use it without much concern.

This is a history of MW used and cost of electricity for the past eight years, including this past February. For some reason, I did not record the data for 2016. 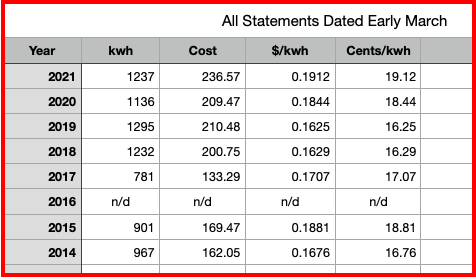