Four (4) producing wells completed:
I often make errors in these graphics. I use them to help me understand the Bakken. They are for my use only; use them anyway you want, but don't quote me on them. If this is important to you, go to the source. Note the location of Clarks Creek near this proposed pad. 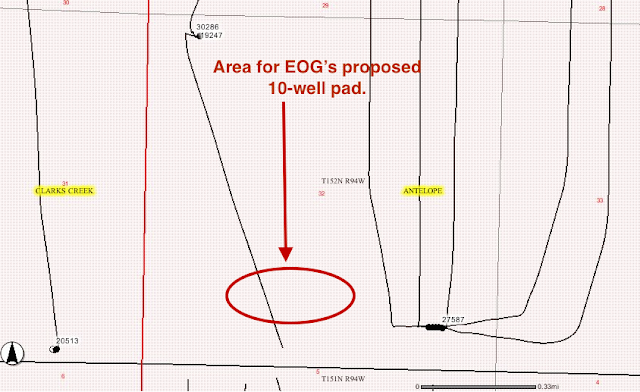 Released After Most News Outlets Shut Down For The Weekend -- Remember That Great Jobs Report Yesterday? -- Not So Fast -- June 19, 2015

The AP is reporting: Unemployment rates rose in half of US states last month. And that's just half the problem; the other half concerns the type of jobs available. They spun the story as best they could.

In fact, only nine states, in fact, registered an improvement in employment rates.

Rates fell in 9 states and Washington, D.C., and were unchanged in 16 states, the Labor Department said Friday.

I wonder if they mentioned the nine states?

More from the story:


California added the most jobs last month, gaining 54,200. Yet its unemployment rate ticked up to 6.4 percent from 6.3 percent. That's because more than 70,000 people started looking for work last month, and about 13,000 didn't find jobs.

New York added 42,700 jobs, the second-most, while its unemployment rate was unchanged at 5.7 percent. Texas gained 33,200, the third-highest, though its rate also ticked up, to 4.3 percent from 4.2 percent.

To be considered unemployed, one must actively be looking for work, but apparently during most of the Obama presidency folks weren't even looking for work because there were so few jobs available. In addition, at some point, when the money starts to run out, folks have to look for work no matter how few jobs are available.

As long as I'm rambling, I have trouble believing folks who want to work make their decision to look for work based on reports in mainstream media whether more or less jobs are coming available. I don't know. For me, there are too many ways to massage the numbers, too many ways to spin the story.

Nebraska has the lowest rate, at 2.6 percent, though it ticked up from 2.5 percent the previous month. In April it displaced North Dakota as the state with the lowest rate. That's because North Dakota has lost oil and gas drilling jobs as energy companies have been forced to cut back in the wake of last year's drop in oil prices. North Dakota's rate is still very low, at 3.1 percent.

3.1% -- that's pretty high for North Dakota. Remember, 4% is considered "full employment." By the way, that 3.1% was unchanged from the month before.

Oh, back to the nine states? New, previous.
I have opined before that 6.0% is the new "full employment." With technology and the much-improved safety net, I don't see a whole lot of difference between 4% and 6%.

The headline "seems worse" than the details; essentially flat unemployment numbers and a few more jobs being added, and more folks looking for work.
Posted by Bruce Oksol at 3:51 PM No comments:

This is another minor story in the big scheme of things, but lots of story lines, for starters:
A reader sent me this link. See if you can spot the Bakken connection. Argus Media is reporting:

The $322mn plus working capital deal includes the refinery and associated pipeline and terminal assets. PBF Energy will have access to LOOP and 80 percent ownership of the Collins Pipeline Company and T&M Terminal company, which offer access to the massive Colonial produces pipeline system in Collins, Mississippi.

Wow, the story lines abound in this one linked story, again:
Continuing:


[PBF's CEO] O'Malley had long lamented the size and range of PBF Energy's refining capacity. The refiner commands the US Atlantic coast's only coking capacity and one of the largest on-site rail facilities in the region, increasing the crude flexibility of its system.

But that flexibility depends on sufficient discounts between western Canada and the US midcontinent to the US Atlantic coast to cover rail shipping prices, a costly delivery method. Rail arbitrage for Bakken, a favored domestic crude for PBF, was closed for a third of the first quarter this year.

PBF looked for refining assets in the midcontinent, in the challenging California refining sector and at Citgo facilities on the US Gulf coast as the company tried to break out of the Atlantic.

"If it's in the United States, we want to look at it," O'Malley told reporters in November.

As if that were not enough, two more pearls for story story lines:
Continuing:


The opportunity (to buy in California) appeared to fade with PdV's decision late last year to not sell its US refining subsidiary, Citgo.

PBF cooled bullish talk on operating in California, where regulators have made operating steadily tougher for refiners, around the same time.

A lot of story lines in that article; lots of swirling tea leaves. I particularly liked:

I've not read the article yet.

The AP is reporting:  According to the Kremlin, a Russian loan was not discussed in Tsipras-Putin talks.

I suppose it depends on what the definition of "talks" is.

Despite the country's abundant reserves, Iran's crude oil production has substantially declined, and natural gas production growth has been slower than expected over the past few years. International sanctions have profoundly affected Iran's energy sector and have prompted a number of cancellations or delays of upstream oil and gas projects. --- EIA

But if Valerie Jarrett gets her way, things will change. A lot.
Posted by Bruce Oksol at 1:42 PM No comments:

Director's Cut is out.


Rig counts continue to fall. The active rig count is 5 to 8 rigs below what operators indicated would be their 2015 average if oil price remained below $65/bbl. The number of well completions dropped sharply from 244 (final) in March to 94 (preliminary) in April.


BLM revised final regulations for hydraulic fracturing on federal and Indian lands were published in the CFR on 3/26/15 so they will go into effect 6/26/15. North Dakota and Colorado have intervened in the Wyoming legal challenge of the rules a nd plan to seek an injunction or temporary restraining order to prevent the rules going into effect until the case is settled.


If it persists, the oil price crash may have undermined many of the assumptions behind massive infrastructure investments in steam cracker plants and export facilities for natural gas liquids (NGLs). These projects expected to take advantage of booming domestic NGL production and low NGL prices relative to crude. Yet take-or-pay commitments and committed investment in plant infrastructure means they may be exposed to  poor returns if crude prices remain low.

One complicating factor in the projection of ethane prices is “rejection” – meaning leaving ethane in the tailgate outlet gas stream from a processing plant – instead of recovering it for commercial use. Rejection typically occurs when the market price for recovering ethane is lower than for natural gas – making it more valuable left in the outlet stream of a gas processing plant. The “rejection” equation is also strongly influenced by distance to market because most demand for ethane is located at the Gulf Coast whereas production occurs in different regions across the U.S. So economic recovery of ethane must also factor in transport cost. The Drill Down provides a detailed explanation of the supply, demand and cost variables required to determine the ethane price forecast. The analysis is broken down by production region and details where supplies to meet Gulf Coast demand will come from as new steam crackers come online – based on the relative cost of transport and available capacity. The cost to produce and transport the last barrel of ethane required to meet prevailing demand sets the “clearing” price for ethane.

It really is amazing: regardless of all that talk about "Peak Oil," whoever back in 1973 would have guessed there would be a glut of fossil fuel in 2015? I find it quite remarkable.

Bloomberg is reporting: The Shale Industry Could Be Swallowed by Its Own Debt.

Bloomberg at Rigzone is reporting: Oil-Sands Megaproject Era Wanes as Suncor to Imperial Scale Down


The era of the megaproject in Canada’s oil sands is fading.

Crude’s price slump, pressure to get off fossil fuels and tax increases in Alberta are adding to high costs and a lack of pipelines, prompting producers from Suncor Energy Inc. to Imperial Oil Ltd. to accelerate a shift to smaller projects.

Companies are deferring new mines in favor of cheaper, bite-sized drilling programs that deliver quicker returns and require less labor. The moves will help reduce cost overruns and make Canadian companies more competitive with U.S. shale producers. The trade off will be reduced production growth and a smaller economic boost for the country’s oil patch.

Enbridge will continue to operate the pipeline assets.

The company said the deal will reduce its cost of capital and allow it to boost payments to shareholders. Enbridge will receive C$18.7 billion of units in the income fund, which will also assume C$11.7 billion of debt.

The sale to the income fund is the first in a two-stage reorganization Enbridge announced last year that will enable it to focus on developing faster-growing projects. The company also plans to sell U.S. pipeline assets to another affiliate, Enbridge Pipeline Partners LP.


We'll know a year from now how this all works out. For newbies: my world view of Tesla is that it is a battery company disguised as an automobile company surviving on tax breaks, subsidies, and grants. Just days after borrowing another $750 million (from seven banks, no less), Tesla "bagged" another $15 million in tax credits from the state of California.

Office Depot shareholders approve sale to Staples.
Posted by Bruce Oksol at 8:32 AM No comments: