Without a deeper OPEC+ cut, North Dakota production, which set a record of 1.52 million b/d in October, would likely have "flat lined" throughout 2020, Lynn Helms, director of North Dakota's Department of Mineral Resources, told reporters Friday.

Helms said that the decision will likely lead to an increase in capital available to producers.

"It was going to be a struggle just to match this 1.5 million b/d," Helms said. The OPEC+ decision "should result in small increments of production growth through the year 2020."

North Dakota's oil output in October was up more than 74,500 b/d from September and more than 37,300 b/d from August, when the previous monthly record was set.

Roughly 72% of oil produced in October was shipped out of the state by pipeline, 16% was shipped out by rail, 6% was trucked or railed to Canada, and 6% was refined in state, the North Dakota Pipeline Authority said Friday.

Glass is half empty. I can't believe the negativity on CNBC. LOL . Maybe I will write about it later, but not worth the time now. Oh, by the way, for the archives: the US House judiciary committee voted along party lines to send articles of impeachment to the entire house. Sort of reminds me of those old westerns, mob rule and lynchings. But that's okay. We always enjoyed those westerns and knew how everything would turn out. To some extent, the action by by the committee reminded me of the Three Stooges, in this case, Jerry Nadler (Moe); Adam Schiff (Larry); and, Nancy Pelosi (Curly). We're all hoping that Clint Eastwood shows up in the US Senate (probably too much to hope for). See first comment. 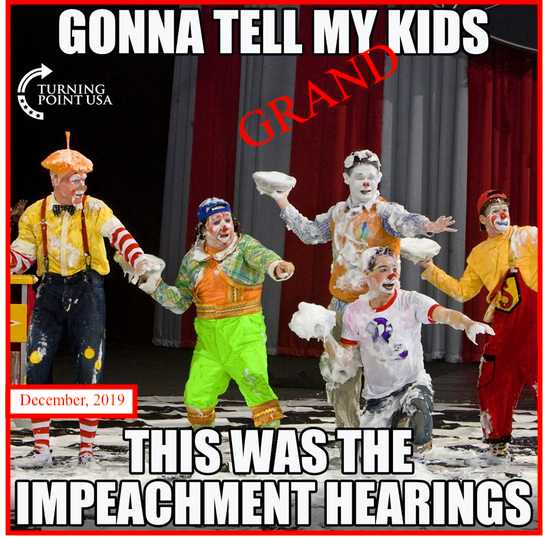 Consumer spending? I was just downtown doing some Christmas shopping -- yes, Don and Kathy -- I have found you the perfect gifts and they will be in mail tomorrow -- inshallah. LOL. The common theme downtown -- it's going to be a huge retail season.

Here's where we live in our little 900-square-foot hovel (and I say that with thoughts of how lucky we really are):
What do folks want? Today, ATT (T) announces that it will raise its quarterly dividend by 2% and will retire $100 million worth of stock in 1Q20, and shares actually fall. What do investors want? LOL. T is already paying 5.32%. What do investors want?

Tethered vehicle subsidy: no link. If interested, I'm sure it's easy to find. If Congress is able to pass another tax bill soon, it is likely that they will give Tesla and GM a nice gift. The 200,000-EV-sales-threshold will be raised to 600,000. Both Tesla and GM have sold more than 200,000 EVs so their federal incentives are phasing out. If a tax bill is passed, look for Congress to triple the number of EVs eligible for the incentive. What a racket.

Schwab: setting the stage to dominate the brokerage world -- Barron's. I said this was a top story for the week. This story is simply huge. Data points from the article:
By the way, what did BK do this week? Not a great week, but the past year has been nice. LOL. See disclaimer. I don't own any shares in BK but I know someone who is a long-time investor in BK.

Does "monthly retail sales" include money spent on gasoline? I believe so. Gasoline prices were down significantly in November.

North Dakota crude oil and natural gas production for October, 2019: there will be two headline stories this month based on this:


Ford is steering into Austin in a big way, as the Texas capital is poised be the first of Ford’s three self-driving car markets to have a command center.

t is impossible to overstate how much is moving into Texas. 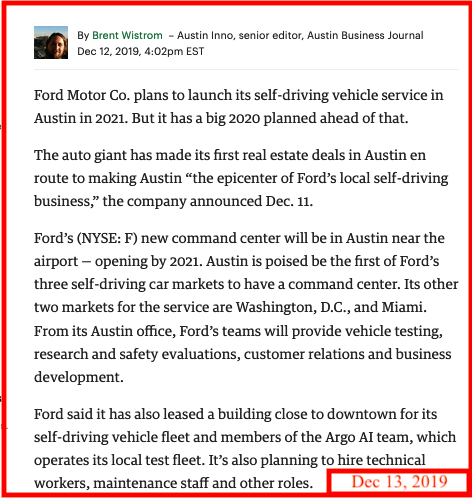 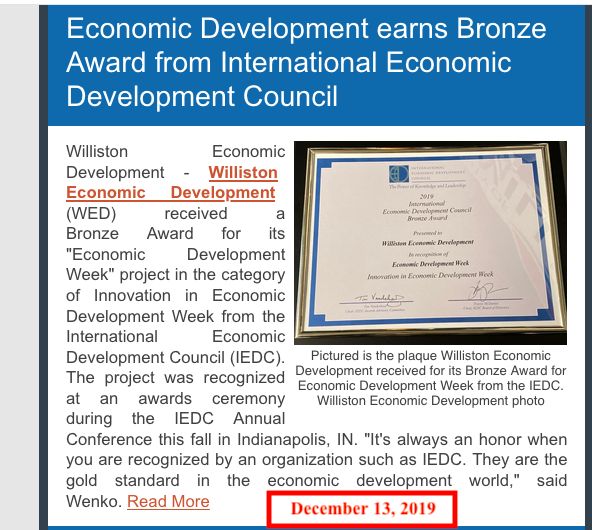 
I'm watching the National Finals Rodeo on TV and just glanced at the CNN Money site.

Something tells me that CNBC won't note this milestone.

Signs off on most recent China-US tariffs agreement. Market continues rally, though a bit choppy.

Also being reported: Trump may skip presidential debates next summer/autumn. Probably a bluff to finally agree to one. Regardless of what he does, this is Trump: never quits negotiating. Anything.

Politics: how I learned to stop worrying and love the Dems --
North Korea: am I missing something? We haven't heard a peep out of Rocket Man in the last couple of days, and just last week he said he was preparing a "Christmas present" for president Trump.

Futures:
Disclaimer: this is not an investment site.  Do not make any investment, financial, job, career, travel, or relationship decisions based on what you read here or think you may have read here.


I had a leisurely conversation with my Schwab broker yesterday, VP-Financial Consultant; talked about a lot of things; forgot to ask about "Robinhood" and fractional shares. Apparently Schwab will also offer that -- fractional shares. Possibly limiting it to certain stocks. But get this, link here:


Robinhood will allow customers to buy as little as one millionth of a share, with purchases rounded to the nearest penny.

Of course there's little reason to buy BRK-A when "B" is available. But Amazon, others.

How does this NOT affect the GDP? Chevron to go ahead with $5.7 billion deepwater project. At Rigzone.
Breakevens: projects anticipating breakeven prices above $60/bbl probably not economical "in the next decade" -- Rystad Energy via Rigzone.

No wells are coming off the confidential list today.


U.S. LNG cargoes’ ability to reach different destinations has become increasingly important for the global market as more liquefaction trains continue to come online, oversupply conditions worsen, and international price spreads have shrunk. Earlier this week, Freeport LNG’s first train began commercial service, marking the sixth U.S. liquefaction and export facility to start commercial operations. About 30% of U.S. long-term contracts for currently operating or commissioning liquefaction trains are held by global portfolio players — i.e., offtakers with large international portfolios and the ability to shift cargoes around the world as prices move. And destination flexibility doesn’t end there, as the other types of offtakers also have shown an increased willingness to divert or even re-sell cargoes in the spot market to better take advantage of shifting price spreads. Today, we continue a series on U.S. LNG export trends, this time focusing on how global prices impact cargo destinations.

Posted by Bruce Oksol at 6:09 AM No comments: