Wonder, wonder, why, I love the Bakken?


I Wonder Why, Dion & The Belmonts

Sunday night. Surfing YouTube. Sitting at the kitchen table in our little hovel. Low lighting inside. Dark outside. Other than occasional headlights moving through the apartment complex, it is completely dark outside. I had not noticed that before, but it appears we have no streetlights in the complex. That probably explains the high rate of bikes being stolen. I bring mine indoors at night.

I couldn't be in a better mood. In our 39 years of marriage, we've never really had nice furniture, but over the past few months -- beginning in April, 2016 -- we have really acquired some nice Stickley furniture. I cannot articulate how incredible it is to sit in our dining room with the furniture. It completely changes everything. It is interesting how little pieces seem to come together.

Our younger daughter and her husband sent us a wonderful wall decoration -- "Welcome" with the silhouette of Bison bison bison. It complements the furniture perfectly.

With no Bakken wells coming off the confidential list for the next six or seven days, it's going to be a long, long week. It will give me a chance to catch up on some reading and some surfing.
Posted by Bruce Oksol at 5:11 PM No comments:


The fall 2016 event is expected to see the debut of the next-generation iPhone 7 and iPhone 7 Plus, which are rumored to feature improved cameras, better processors, and improved water resistance, implemented through the removal of the headphone jack and the introduction of a new flush, pressure-sensitive home button. Both devices are said to look similar to the iPhone 6s, with the same general size and shape, but with relocated antenna bands that no longer span the back of the devices.

Original Post
The next Apple "launch" is sometime in September, next month. Lots of rumors, as usual.

I mentioned that to my wife earlier this morning. This afternoon I took a bike ride to the Apple store in Southlake (stopping at Costco and Barnes & Noble, along the way). At the back of the story is where they keep accessories: drones, headphones, power cords and adapters, cases, external hard drives (terabytes of storage).

In the past, the back end of the store with the accessories has been pretty much a "lot" of everything. But today, it seemed about 75% of the space was for Beats wireless over-the-ear headphones and Beats wireless ear buds.

The display almost shouted: "Yes, the iPhone 7 will NOT have the headphone jack. You will need a wireless pair of ear buds or headphones.

I was curious was Macrumors.com might have to say about wireless headphones. When googled, this was the first hit: "Apple stores offering exclusive Jaybird Freedom (Wireless) Ear Buds."

Again, "it" just seems to shout: ""Yes, the iPhone 7 will NOT have the headphone jack. You will need a wireless pair of ear buds or headphones."

If Tim Cook does not pull the headphone jack, I will be quite disappointed, not because it makes any difference to me (I don't have an iPhone) but because it suggests to me Tim Cook is not willing to skate to where the puck will be.

The iPhone already has wireless built in, so this would be removing a piece of hardware the iPhone no longer needs. The "jack" is the long pole in the teepee with regard to the thickness of the iPhone: removing the "jack" will allow Apple to make the iPhone thinner.

The Washington Post is using the phrase "far short than forecast" to describe how many folks are signing up for ObamaCare. Look how bad this is:


Enrollment in the insurance exchanges for President Obama’s signature health-care law is at less than half the initial forecast, pushing several major insurance companies to stop offering health plans in certain markets because of significant financial losses.

As a result, the administration’s promise of a menu of health-plan choices has been replaced by a grim, though preliminary, forecast: Next year, more than 1 in 4 counties are at risk of having a single insurer on its exchange.

Debate over how perilous the predicament is for the Affordable Care Act, commonly called Obamacare, is nearly as partisan as the divide over the law itself.

But at the root of the problem is this: The success of the law depends fundamentally on the exchanges being profitable for insurers — and that requires more people to sign up.

In February 2013, the Congressional Budget Office predicted that 24 million people would buy health coverage through the federally and state-operated online exchanges by this year.

Just 11.1 million people were signed up as of late March.

Obama no longer cares. He has moved on. Getting ready for the next chapter in his life which most likely includes a Clintonesque MuslemUSA Foundation.

By 2018, if not by the end of 2017, we will pretty much see the end of ObamaCare prompting Ms Clinton to go to Congress for the "public option" -- a euphemism for "US National Health Service." Medicare for all.

And she may very well get it.  Especially if the GOP loses the Senate and the House. And the Supreme Court.

The Butterfly Moment -- Another Ledecky Moment (In Which She Mentions Dr Hagan, Williston, ND) -- August 26, 2016

When you view the YouTube interviews with Katie Ledecky, remember two things:
This is quite a spectacular story, from the August 22, 2016, issue of Sports Illustrated:


It was the butterfly that sealed it.

Jon Ledecky was already having an unusually heady day for an 11-year-old: The principal at his elementary school in Queens, NY, had introduced him as a future U.S. president, then Jon had given a speech to his classmates and then he had walked outside with the priest who had given the blessing.

That's when the yellow butterfly fluttered onto the back of his hand and sat there, beautiful and calm. "Oh, my God," the priest said. "It's a sign."

So, yes, Jon had cause to think that he was destined to do something great. And he did go on to build a billion-dollar business, give away millions to charity and, last month, at 58, become co-owner of the New York Islanders. By most standards he lived up to that lepidopteran promise—and had the markers to prove it.

But what if, all along, none of that was the prophecy? What if Jon's true fate was to meet Mary Gen Hagan one day in 1990, to instantly know that she was his brother's match and to set out to introduce them? The next weekend she and David Ledecky would talk for 3 1/2 hours at a party in Old Town Alexandria, VA, and David would snatch her card from Jon and call her a day later. In two years they would marry. In 1997 they would have a baby and name her Katie.

"When I met Mary Gen, things slowed down," Jon says. "That's why I was so emphatic that my brother meet her. It was like a bright light shined on her and said, This is your brother's wife. Dave was not in the mood to go to that party, and I literally dragged him. Who knows? If you believe in faith—and Katie has this deep belief in faith—something was going on there. That was the butterfly moment."

In the video below, her uncle Jon is also mentioned.

Several pools were mentioned in the video, but not the one I swam in: the outdoor Harmon Park pool. I believe a very memorable middle school teacher worked at that pool during the summer. I never had her for a teacher, and I never met her.

The Ford At The Star: this is the new corporate headquarters for the Dallas Cowboys, in Frisco, just a few miles from where we live. The stadium opened last night for the high school's first varsity football game of the season. Some data points from the article:
Speaking of the Dallas Cowboys: Earliest this summer I happened to catch a short segment on some sports talk show about the Dallas Cowboys. One analyst said that computer models predicted that Dallas would be #1 in their division or conference, or some such thing. The other analyst countered that with the likelihood of Tony Romo suffering another injury, it was unlikely that Dallas would have a winning season. The first analyst said that one cannot "forecast" the success of professional football team based on the likelihood of injuries. What? You have got to be kidding. The computer models did not take into account players' injury history?

Today in the Sunday Dallas Morning News, front page story, I see that Tony Romo won't be playing in the season opener: an MRO shows that he has a lower vertebral fracture.

Right on cue and absolutely predictable.

By the way, it now makes sense. With regard to Colin Kaepernick not standing for the national anthem. It turns out it's a personal problem. It has nothing to do with the US. Kaepernick is sulking. His back-up quarterback is outperforming him. It is likely Kaepernick will not be on the 49ers roster two weeks from now. That's the good news. The bad news: he could end up on the Dallas roster. Whatever. He refusal to stand during the national anthem is simply a personal problem, a rich adolescent sulking.

From the WSJ weekend edition: a field guide to sausages.

Our older daughter has informed me that Olivia's soccer team is tied for the #1 position in their soccer league, after winning the season's opener, 2 - 0. LOL.

They win their first game of the season, along with the other half of the league (although I suppose there were some games that ended in a tie) -- but with all wins (one) and no losses, they have to be in first place. This is not entirely true. The rankings are also determined by the number of goals made by the winning team and how many goals the winning team allowed the losing team. It sounds pretty complicated to me. That's why colleges offer degrees in sports, I suppose.

Olivia is "playing up" this year. She and her closest friend are a year younger than the rest of her team and most of the league. Olivia played defense midfielder and was awarded two assists, an assist for each of the points scored. 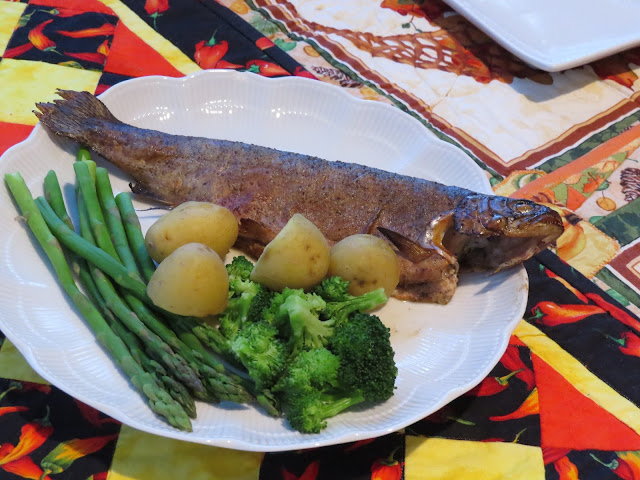 The potatoes: boiled in a pot of water with one cube of chicken bullion added.

I was also late to the spiralizer party. I was introduced to spiralizing by our older daughter, who in turn learned about it from our younger daughter. I bough a spiralizer from Amazon.com about one month ago but have not used it yet. The link takes you to a nice Los Angeles Times article on spiralizing -- coincidentally posted after I received my spiralizer.

From the article: spiralizing broccoli stems. Isn't that a cool idea. I throw away half (maybe more) of the broccoli I buy simply because I thought one only ate the florets.
Posted by Bruce Oksol at 8:30 AM No comments: