Three Enerplus wells reported as plugged or producing (so you know they are all producing), all in Dunn County:

Just a couple of days ago we noted the number of days of crude oil supply in the US dropped below 30 days during the second week of June, 2021. Today, it is noted that the days of supply has dropped again.

For the third day, US crude oil supplies are now at 28.7 days.

BP to stick with oil and gas for decades, according to the CEO.

Apparently with the rally in oil prices and "fossil fuel shareholders" jumping ship, the CEO is starting to re-think some of the earlier ESG comments.

Wasn't BP going to go all green just last year. Things certainly suggest there's a bit of anxiety about going all green with the news coming out of China, out of the US, out of Europe.

Maybe some folks are starting to think this through.

Judge James Boasberg dismissed all outstanding counts in the case and said the Army Corps would not have to file status updates to the court on the progress of their environmental review. The move marks the end of a winding, years-long chapter in the DAPL dispute, though future legal challenges are likely.

In a brief order, U.S. District Judge James Boasberg dismissed all outstanding counts in the case and said the U.S. Army Corps of Engineers would not have to file status reports to the court on the progress of their environmental review. The judge said the Standing Rock Sioux Tribe, which has opposed Dakota Access since its construction began near their North Dakota reservation in 2016, can request for the case to be reopened if there is a violation of prior court orders.

Also at The Williston Herald.

When we last visited this story, it was said the judge was still "working on" the issue. The seemingly suddenness and the fact it was a "brief order," suggests to me the judge simply got tired of the whining. How many pipelines already run through this area? In addition, this one is clearly the "safest" of them all, and most highly monitored, and any leak is going to have to defy gravity and flow to the surface.

And we move on. For now.

From a reader, the "full docket text":

MINUTE ORDER: Having considered the parties' [608]-[611] Status Reports, the Court ORDERS that: 1) In light of the Corps' monthly public updates and Plaintiffs' cooperating agency arrangements, the Court will not require independent updates or status reports; 2) All remaining outstanding counts are DISMISSED WITHOUT PREJUDICE, given Plaintiffs' lack of objection; 3) The Clerk shall TERMINATE this matter, but Plaintiffs may move to have it reopened in the event, for example, of a violation of the Court's prior Orders; and 4) Plaintiffs shall file a separate action if they wish to challenge the forthcoming EIS, which action they may mark as related to this one so that it will be assigned to this Court. So ORDERED by Judge James E. Boasberg on 6/22/2021. (lcjeb1)

The reader follows legal proceedings very, very closely over many years, particularly as they pertain to North Dakota.

The reader says this "order" is incredibly short. The reader has written grocery lists that are longer. 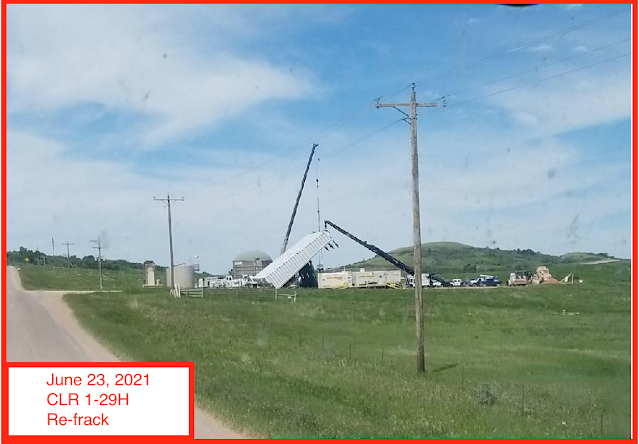 Again, due to traveling, blogging will be minimal and intermittent. Posting comments and replying to e-mail will be delayed.

RBN Energy: old-school hydrogen production and demand, and why it matters.

With all the hype about hydrogen you hear these days, you’d think the gas was just discovered yesterday. But, of course, it’s been around for a while — like back to the Big Bang 13.8 billion years ago. It does a nice job powering the sun and, when combined with oxygen, provides another building block of life on our planet: water. And that’s not all. For decades, a lot of hydrogen has been used as industrial feedstock to produce low-sulfur refined products, ammonia, methanol, and other useful stuff. However, this hydrogen production isn’t “green,” the color code for the highly exalted hydrogen produced from zero-carbon sources.

No, most of the hydrogen used today goes by the drab hue of “gray” and is generally ignored by the carbon-neutral buzz that permeates the decarbonization dialogue. It shouldn’t be disregarded, though. Over 13 Bcf/d of this gray hydrogen is produced on purpose or as a byproduct each day, more than the volumetric equivalent of all Permian natural gas production. And if the carbon dioxide produced along with that hydrogen is stored permanently underground, then gray hydrogen magically becomes “blue” — almost as good as green. Today, we begin an exploration of the gray hydrogen market, and how it has the potential to impact decarbonization goals far more than green hydrogen over the next decade.