Link her to story.

“We are pleased to report good year-over-year increases for the past eight quarters, five of which have seen nearly 10% growth or more.” Rauschenberger said. “It was no surprise to see a significant increase in this report with oil production hitting an all-time record of 1.4 million barrels per day in January.”

“The retail trade sector showed an increase of 5.39% when compared to last year,” Rauschenberger stated. “This continues a recent trend of growth in this important sector. This is great news after several years of declines in this vital component of the state’s economy.”

Rauschenberger added that prior to the three most recent quarters, the state experienced at least ten quarters of declines in the retail trade sector.


.Complete state data at this site, a pdf will download.

July 20, 2019: see comments. Nice comment from someone who really understands this stuff. Me? Not so much. LOL. 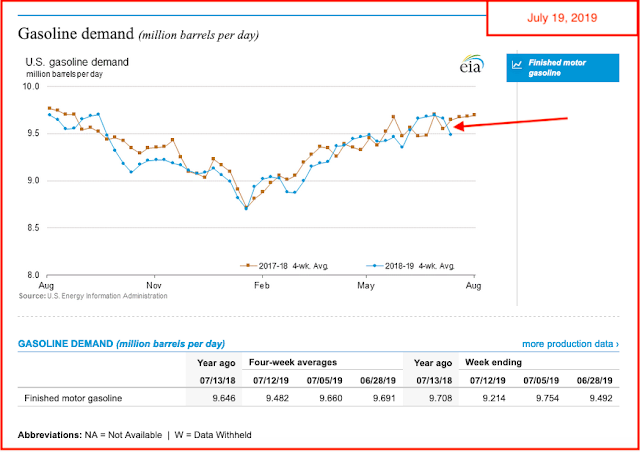 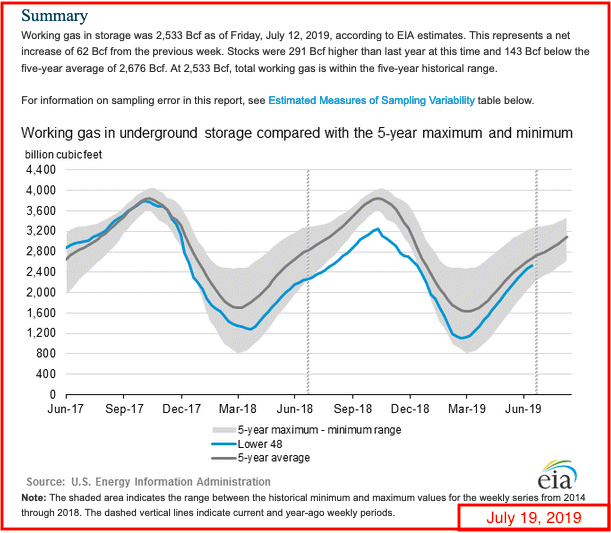 Think about it. Sure, Big Oil / Big NG is losing money on natural gas right. But America, as a country, is benefiting Big Time with all this cheap, dependable, dispatchable energy.
Posted by Bruce Oksol at 4:51 PM 2 comments: 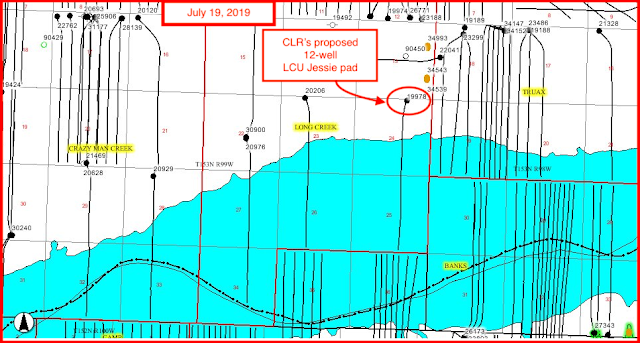 Iran: seizes a British-flagged, Swedish-owned tanker. Said to be in retaliation for Brits seizing one of Iran's tankers. It's beyond me why any western-flagged tanker is going through the strait without overwhelming naval military protection. It's even more beyond me what Iran's long-term game plan is. Iran is irritating everyone -- not just the Brits or the US -- in the area -- including the other OPEC members in the Mideast.

See this exuberant note on UNP from yesterday. The point of the post was that all that hand-wringing over the Chinese trade war may not be all that necessary. Earlier, pundits said that the trade war was the reason CSX reported poor earnings for 2Q19. But then UNP reported stellar earnings.

From Benzinga:
From the CEO, doing more with less (which seems to be a common theme this year):

Dueling videos. I mentioned that I enjoyed Gareth Gates' Spirit in the Sky. Arianna came back with Tukka Laga Tukka Laga.
Posted by Bruce Oksol at 1:49 PM No comments:

China To Add Even More Coal-Generated Electricity -- Country Appears Unable To Keep Up With Demand -- July 19, 2019

What is the fastest way to meet new electricity demand? China knows.
From a post on July 14, 2019:


This is pretty cool. For the past couple of days I've been doing a short series on coal (see this link).  Today I noted that oilprice posted a story yesterday (July 13, 2019) on the very same subject with the very same them.

All of a sudden, it seems, there has a been a flurry of articles from multiple sources on the increasing energy demand by China and India and how fossil fuel (crude oil and coal) will be meeting that need.

My interest was piqued when it was reported a few days ago that Germany was ready to shut down its last coal plants. See this link.

At this website, these data points:
And now today, this story from Reuters:
I have no idea whether this 11 GW of expansion by one Chinese company is part of the "336 GW that was already being planned."

One company in China will add 6 GW this year, and another 5 GW next year (2020) on top of an already ambitious coal-plant building program.

Germany, by eliminating 50 GW of coal-geneated electricity over the next 20 years will have no effect on global CO2 emissions, FWIW.


As I posted yesterday, Tiger Woods would miss the cut at The Open. He did.
Television revenue? With only American on the leaderboard (top seven spots) and the loss of Woods / Mickelson, this does bode well for American viewership (and throw in the six-to-nine hour time difference).

The two books for this next week:
Coming in the mail today from Amazon:

Later, 12:32 p.m. CT: something doesn't make sense to me. Two screenshots of the NASDAQ this morning. In the original link, before the opening, the NASDAQ (futures) up 20 points and said to be 7,954:

There is nothing new here, but I just noted this today when I was trying to figure out if the NASDAQ has ever gone above 8,000 (see original note below).

Disclaimer: do not make any investment, financial, job, career, travel, or relationship decisiosn based on what you read here or what you think you might have read here.

The US equity markets: I assume this is why I"m in a great mood. All three major indices trading at near record highs, and after a couple of days "in the red," are now "very green" before market open.Earnings for 2Q19 reported so far are not nearly as bad as pundits/companies warned. The banks in general, first to report, did very well, it appears. I am most interested in how natural gas gathering and processing companies do going forward.

IBM: reported a good 2Q19, apparently; saw the headline, nothing else

West Texas Light: just a reminder that it's a new benchmark; not easy to find; 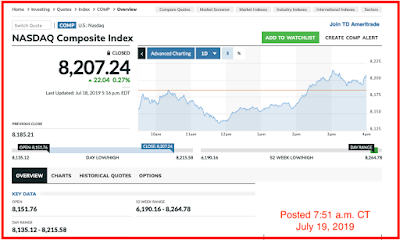 
The battle over the future of Enbridge’s Line 5 light crude oil pipeline through Michigan is heating up. In recent weeks, Michigan’s new attorney general filed suit to throw out the 1953 easement the state granted to allow the pipeline to be laid under the Straits of Mackinac — the narrow waterway between Michigan’s upper and lower peninsulas — and to block implementation of an agreement Enbridge and the state’s then-governor reached last fall to replace the section of Line 5 under the straits by the mid-2020s. Enbridge is pressing ahead, maintaining that the existing pipeline is safe and the 2018 agreement is legal and fully enforceable. All that raises two questions: just how important is Line 5 to the Michigan and Eastern Canadian refineries, and what would those refineries do if the pipeline were to cease operations? Today, we discuss recent developments and examine the issues at hand.

Enbridge’s Line 5, part of the Canadian midstream company’s much larger Mainline/Lakehead crude oil pipeline system, has been an important conduit for moving Western Canadian and Bakken crude oil and NGLs across Michigan’s upper and lower peninsulas — and into Ontario — for more than 65 years. Line 5 (purple line in Figure 1) is one of multiple Enbridge pipelines out of the company’s terminal in Superior, WI. The 540-Mb/d pipeline transports “batches” of either light crude, light synthetic crude or mixed NGLs 645 miles east/southeast through Michigan to Sarnia, ON. The crude oils and NGLs are sourced primarily in Western Canada (but also in the Bakken) and are bound for Michigan, Ontario and Quebec. At the Straits of Mackinac (dashed red oval) — the four-mile-wide water passage between Michigan’s upper and lower peninsulas (and Lake Michigan and Lake Huron) — the 30-inch-diameter, single-pipe Line 5 splits into two 20-inch-diameter, parallel pipes that are anchored along the straits’ lakebed.