In this case, ExxonMobil has announced it will significantly expand production of polyethylene at it PE plant in Beaumont, TX. Data points:
It just never quits.

One year ago I was not paying attention to Medicare Part B. Now I am.

This article in Forbes is helpful.
Posted by Bruce Oksol at 8:30 PM No comments:

Email ThisBlogThis!Share to TwitterShare to FacebookShare to Pinterest
Labels: PlasticsPlant

Aeschylus: older; fought in the battle against the Persians at the Battle of Salamis.

Sophocles: was an older teenage on the day of the battle; he took part in the victory parade.

Euripides: born on the very day the Battle of Salamis took place.

Aeschylus: a prolific writer; wrote 70 - 90 plays; only 7 have survived; his Oresteia is the only complete Greek tragic trilogy extant today.

Sophocles: his work is considered the pinnacle of Greek tragedy. He wrote around 123 plays for the Athenian theater but only seven have survived intact.

Euripides: eighty titles are known but it is thought he wrote 92 plays; only 19 of his tragedies are extant today.

The question I have always had: what happened to all those plays that were lost. Part of the answer comes from David Abulafia's The Great Sea, c. 2011, page 160:


The Ptolemies were determined to lay their hands on the best possible texts fo the great authors for their famous Library at Alexandria. They hoodwinked the Athenians into sending their master copies of the plays of Aeschylus, Sophocles, and Euripides for copying, and then retained them, even thought that meant sacrificing an enormous deposit in silver.

And, of course, as everyone knows, the great fire of the library destroyed all its works.


Operators are moving rigs to better acreage. Continental is an excellent example. It has a large footprint in North Dakota. Continental was Bakken built, but higher taxes and more costly differentials forced a move to Oklahoma.

North Dakota is also becoming the state known as the state that can't get a pipeline built: Keystone, Sandpiper, and the Dakota Access Pipeline have all been killed. People still hold out hope that the DAPL will be completed.

Other data points from the linked article. In 2013:


Most were moving to a 2-mile lateral using 30 stages and 4 million pounds of proppant. We also saw a move to sliding sleeves, as this helped to keep costs down. When compared to plug and perf, it provides much less access to the source rock.

Could Trump mandate US refiners use only US crude?


Trump wants to increase the number of high-paying jobs and decrease our reliance on OPEC oil is bullish for all unconventional producers in the US. There is a major issue for OPEC in the coming years. Protectionist legislation could pressure refineries to use US crude.

If this comes to fruition, US production could rise and the WTI/Brent differential could widen significantly. If OPEC crude isn't finding its way to US customers, it may need to cut more than it initially thought.

Yahoo!Finance has this headline story today: Trump's jobs plan faces a bigger challenge than China. Robots may prevent Trump from bringing back the manufacturing jobs he promised.

November 15, 2016: this morning on MSNBC Morning Joe, the two anchors were very, very complimentary on last Saturday's SNL. They thought the opening was excellent and that the entire SNL was funnier and more uplifting.


Original Post
A reader asked me if saw the SNL "cold open" skit two nights ago, and what I thought of it. I had not seen it until now. Here it is:

Random thoughts as I'm listening to this in the background:
This is what makes America great. Not Wanda Sykes and not Portland protesters.

Drudge is the poster child for web sites that the left loves to hate. But if one wants breaking news, no one does it better.

I would have missed the breaking story that Gwen Ifill has died of cancer had it not been for The Drudge Report. The LA Times has the story, but it's a fair way down their front page (on-line) and could have been easily missed. I found it because I was looking for it. The New York Times, The Wall Street Journal, and Fox News do not have it on their front page internet site -- if they do, it is not easily found.

Gwen Ifill as the face of PBS News Hour.

Link here.  Data points:
You have to give Hess credit for holding on to folks as long as they could.
Posted by Bruce Oksol at 12:51 PM No comments: 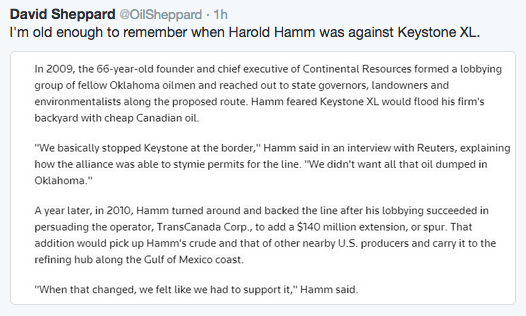 If accurate, that's reassuring. To know that it was Harold Hamm that stopped the Keystone XL and not someone like Soros.
Posted by Bruce Oksol at 12:28 PM No comments:

My wife is Hispanic-Japanese. She does not look like Trump's America. At least that's what she tells me. Today, she flew to Portland, OR, to visit our daughter there. For the past five days she has been obsessing about whether she would need her passport to get back to Texas when she returns (?) a week from now. I reassured her that a state cannot secede from the union that quickly. She probably should not have asked the TSA agent whether she would need her passport or whether the credit-card-like passport card would be sufficient when returning from Oregon next week.

She was taken out of the security line at the airport and subjected to an extra-special TSA security pat down. In addition, x-ray scanning of her carry-on alerted the technician which resulted in further scrutiny. Apparently the wet wipes look like suspicious items when scanned.

I was watching all this from quite a distance outside the security area. It reminded me of the time my grandfather, father, and I, an eighth grader, were searched leaving West Berlin, on our car trip through East Germany.

Once to her gate, she found herself surrounded by Trump deplorables.

I just received an e-mail note from her. She has arrived safely in Portland, raving about how wonderful Alaska Airlines is compared to Spirit Airlines, her go-to airline when she flies to Los Angeles.

She did not say whether she plans to return to Texas next week as scheduled. In a follow-up e-mail she wrote: "Those TDA (sic) agents, though were polite & personable, unlike at Spirit."

My hunch is she is paranoid that her e-mail is being monitored.

The graphic at the link might be photo-shopped. Link here.

Later, 12:58 p.m. Central Time: a reader sent me this link, a report that the Russians had lost a MIG-29 off the a/c carrier. I replied: a third-rate navy.


Original Post
"The little tug that could" is now anchored in Tartus harbor. There are four other ships anchored in the harbor. Two more ships are ready to dock. The most recent ping was for minutes ago, approximately 8:59 a.m. Central Time. My hunch is that the a/c carrier remains off-shore. 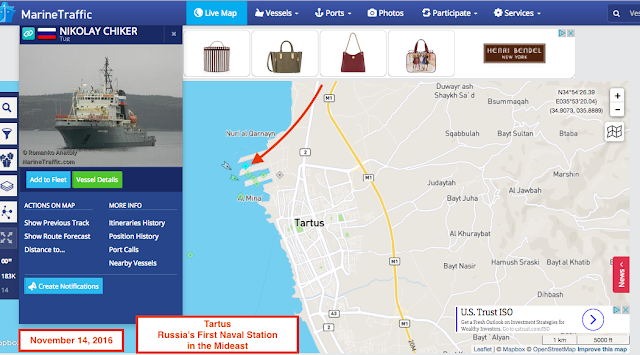 The four other ships at anchor/docked are not relevant to this discussion.

The two ships heading to the docks are:
For more on Tartus, see this post: http://themilliondollarway.blogspot.com/2016/10/update-on-moscows-club-med-october-21.html.  The heading in the screenshot is not quite accurate: Russia has had a naval facility at Tartus for quite some time; however, Russia now plans to convert that "temporary" naval facility to a permanent facility.

This is perhaps the best review of the new MacBook Pro I've seen.

David Pogue was an Apple fanboy until he wasn't, many decades ago.
Posted by Bruce Oksol at 8:53 AM No comments:

The moon this morning, about 6:15 a.m. Central Time was absolutely incredible. I've watched the skies for decades, but I do have to say the moon lived up to all its "hype" this past couple of days.

Only three presidents have donated their presidential salary to charity: Herbert Hoover, JFK, and Donald Trump.

This is pretty funny: the "narrative" has changed. The anti-Trump folks, surprised by three consecutive days of all-time records on the stock market, have changed their narrative. These were the guys who said a Trump presidency would destroy the US and yet the market has set three all-time records over three consecutive days, and it looks like it will happen again today. Now the anti-Trump folks tell us that, "hey, maybe a Trump presidency will actually be good for the US in the short term, but in the long term a Trump presidency won't be good for the US." I saw the "new narrative" over at Bloomberg.com and it was also on MSNBC Morning Joe this morning. So that's the "new narrative." [Update, 9:27 a.m. Central Time -- Reuters is reporting that Dow hits a record high. This is now the fourth record high in as many days.]

Gasoline: even this surprised me. Gasoline at neighborhood service station was $1.74/gallon. And this is not the least expensive station in the area.

Oil: as OPEC continues to increase production, the price of oil continues to drop. Monday morning futures show oil dropping below $43, now about $42.87.


A combined GE+BHI brings technology and scale to rival Schumberger and Halliburton in North America and the global markets. Many analysts believe that the new GE+BHI puts the company in a position to lead the industry in several drilling, completion, and production market segments.

Although each of these segments varies across the conventional and unconventional markets, GE+BHI would immediately be positioned as a go-to company alongside Schlumberger, Halliburton, and Weatherford.

The Permian land, looks a lot like the Bakken boom, as oil companies rush in to lock in leases. 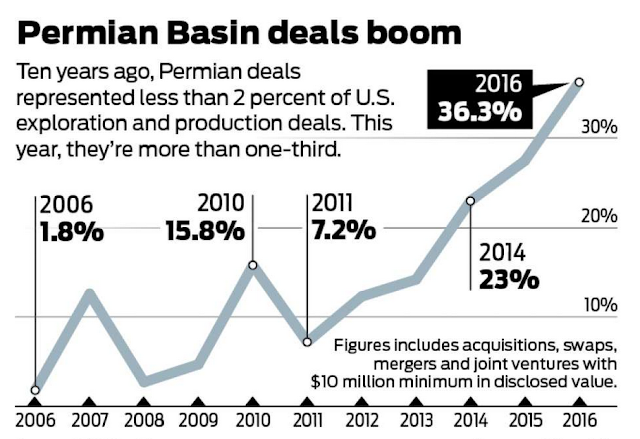 HOLLYWOOD, Ala. (AP) — After spending more than 40 years and $5 billion on an unfinished nuclear power plant in northeastern Alabama, the nation’s largest federal utility is preparing to sell the property at a fraction of its cost.

Data points (some numbers rounded):
I see a mall and museum coming, along with a 1,600-acre solar farm. Or sugar beets.

The Tennessee Valley Authority utility says it will hold an auction Monday for the Bellefonte Nuclear Plant. Minimum bids are set at $36.4 million, and one company has already said it's offering more than that.

The utility says it wants the property used in a way that will benefit the surrounding economy of the Tennessee Valley.

This tells me that things are not as bad in the United States or California as the pundits or mainstream media would lead us to believe. From The Wall Street Journal: California, as Clinton Territory, Finds Itself a Political Outlier. Many residents feeling detached from nation; even rock-solid-red Orange County went blue.
Posted by Bruce Oksol at 6:48 AM No comments: