The GOM Is Getting Back On Track -- Motley Fool


Following years of subdued activity in the aftermath of the 2010 BP Deepwater Horizon disaster and the subsequent moratorium, drilling activity in the Gulf of Mexico is finally picking up. Companies including Chevron, Royal Dutch Shell, and Anadarko are all bringing new, high-impact projects online this year.

Most activity is currently concentrated in the Gulf's Miocene geological trend, where companies have been drilling deepwater wells for decades. But the biggest opportunities in the region may lie in what's known as the Lower Tertiary, or Paleocene -- a relatively uncharted geological trend that could hold twice as much oil as North Dakota's prolific Bakken shale.

Until relatively recently, energy companies had assumed the Lower Tertiary, which is characterized by much older rocks, ultra-deepwater depths, and high bottom-hole pressures, to hold very little quantities of oil. But thanks to a hunch by Texaco geologist Robert Ryan nearly two decades ago, the 25 million year old formation has been catapulted into the big leagues.

Back in 1996, Texaco and its partners, including Royal Dutch Shell, Amoco Corp., and Mobil Corp., which would later merge with Exxon to become ExxonMobil, drilled a well in the Lower Tertiary that broke the world record for the deepest deepwater well ever drilled. What the companies found would set off an exploration rush that is only to set to accelerate in the years ahead.

Experts estimate the Lower Tertiary could contain a whopping 15 billion barrels of recoverable oil, worth $1.5 trillion at current prices. By comparison, the Bakken and Three Forks formations that span parts of Montana, North Dakota, and South Dakota are estimated to hold 7.4 billion barrels of technically recoverable oil, according to calculations by the U.S. Geological Survey last year.

Indeed, the Lower Tertiary is projected to become the single largest source of oil in the Gulf of Mexico over the next 15 years, according to consultancy Wood Mackenzie.

Though its development faces challenges including extreme pressures and temperatures and staggeringly high development costs, the sheer size of the trend's resource potential is simply too great to pass up.

With regard to the statement "the Bakken and Three Forks formations that span parts of Montana, North Dakota, and South Dakota are estimated to hold 7.4 billion barrels of technically recoverable oil" --- newbies may want to look at CLR's numbers which can be found at their most recent presentation. This is not new; CLR has been saying this for the last two or three years.
Posted by Bruce Oksol at 11:06 PM No comments:

On tonight's ABC Evening News it was noted that a tropical storm in the Gulf of Mexico was forming; if it becomes a named tropical storm/hurricane it will be named "Dolly."

The broadcasters noted that it has been 20 years since it took this long into the hurricane season to finally get to the letter "D".  Extreme weather. LOL. Can't make this stuff up. Back in 1994 that was "tropical storm Debby." Didn't even get to hurricane status. One has to go all the way back to 1984 to find a hurricane with a "D" name that developed so late in the season, Hurricane Diana. Extreme weather. Yep.

The storm is headed for the mid-east coast of Mexico, well south of Texas.

Back on May 15, 2014, I started following the Ukraine-Russian-Chinese energy story. Today Reuters is reporting:


President Vladimir Putin on Monday oversaw the start of construction on a giant pipeline that is due to ship $400 billion (240.78 billion pounds) worth of Russian gas to China in the three decades after flows begin in 2019.

The 4,000 km (2,500 mile) "Power of Siberia" pipeline, being built by state-controlled Gazprom, forms a key part of the Kremlin's energy strategy, symbolising Russia's attempts to wean itself off dependence on European markets that account for most of its exports.

Flows through the "Power of Siberia" will start at 5 billion cubic metres (bcm) of gas in 2019, ramping up to 38 bcm under a deal signed by the two countries in May.

The long-awaited deal with China National Petroleum Corp was a diplomatic coup for the Kremlin after a decade of difficult negotiations, and a symbol of its efforts to strengthen economic ties with Asia as Russia's economy faces the effects of Western sanctions over the crisis in Ukraine.

Gazprom chief Alexei Miller told Putin and Zhang that a further contract on shipment of gas via a second, more westerly route, could be signed in November.


Cracks are emerging in Germany’s once rock-solid economy as companies’ reluctance to invest bears out Mario Draghi’s warning that the euro-area recovery is in danger. [I think he's being "generous" in his assessment.]

Gross domestic product in Europe’s largest economy shrank 0.2 percent in the second quarter, the Federal Statistics Office said today, confirming an Aug. 14 estimate. While part of the drop can be attributed to a mild winter that front-loaded output earlier in the year, the Bundesbank has cast doubt on a second-half rebound and suggested its forecasts may prove too optimistic.

Not once does the article mention the energy challenges facing the EU and Germany. Something tells me Germany is thinking twice about new sanctions on one of its biggest trading partners, Putin's Russia.


The European Union could ban gas exports and limit industrial use as part of emergency measures to protect household energy supplies this winter, a source told Reuters, as it braces for a possible halt in Russian gas as a result of the Ukraine crisis.

Russia is Europe's biggest supplier of oil, coal and natural gas, and its pipelines through Ukraine are currently the subject of political manoeuvering - not for the first time - as Europe and Moscow clash over the latter's military action in Ukraine.

Kiev is warning that Russia plans to halt gas supplies while Moscow says Ukraine could siphon off energy destined for the European Union - which has just threatened new sanctions if Moscow fails to pull its forces out of Ukraine.

While buyers of oil and coal can find new suppliers relatively quickly, southeast Europe receives most of its gas from Kremlin-controlled Gazprom.

Tankers from Qatar and Algeria bring liquefied natural gas (LNG) to Europe via ports along the Atlantic and Mediterranean oceans, but European buyers often re-sell those cargoes abroad for higher prices rather than supplying their domestic market.

There are some huge tectonic shifts taking place; most of them seem to be related to two issues: energy, and Sharia.
Posted by Bruce Oksol at 6:02 PM No comments:

CLR presentations can be found at this link.

Some data points rounded; all information below pertains to the Williston Basin Bakken; the data from SCOOP is not included except in two early bullets.


From the EIA, August 14, 2014: India is increasingly dependent on imported fossil fuels as demand continues to rise. 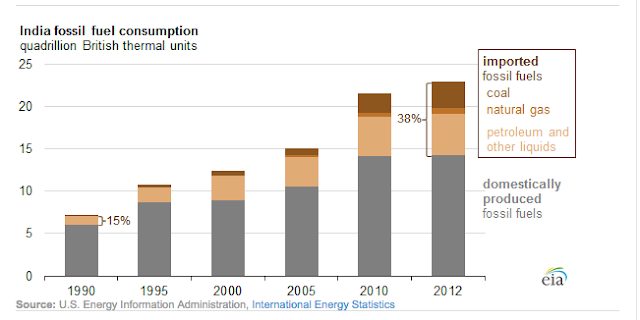 
Blackouts in India widened as inadequate coal supplies forced plants to shut down, after increased industrial activity and a monsoon deficit boosted electricity demand from factories and households.

The national peak shortage yesterday expanded to more than 6 percent from the 3.9 percent average in July, according to data from the Power Ministry and Power System Operation Corp., a unit of Power Grid Corp. of India. Stocks at power stations run on local coal plunged. Equipment breakdowns or maintenance also caused other plants to be under shutdown, including ones operated by Tata Power Co. and Adani Power Ltd.

A surge in economic activity has led to higher demand for the fuel, exacerbating supply bottlenecks caused by heavy rains at some mines and slow railway transport in places. India’s economy grew at the fastest pace in more than two years, the Central Statistical Office said in a statement in New Delhi yesterday. Slow economic activity had caused coal stocks at power plants to swell last year.

Later: I was going to explain the purpose of this post, but then got interrupted. See first comment/reply below.  And I just remembered something. I will add another reply.
Posted by Bruce Oksol at 2:07 PM 3 comments: