Headline writers continue to write the narrative they think should be playing out, but the numbers don't support the headlines: 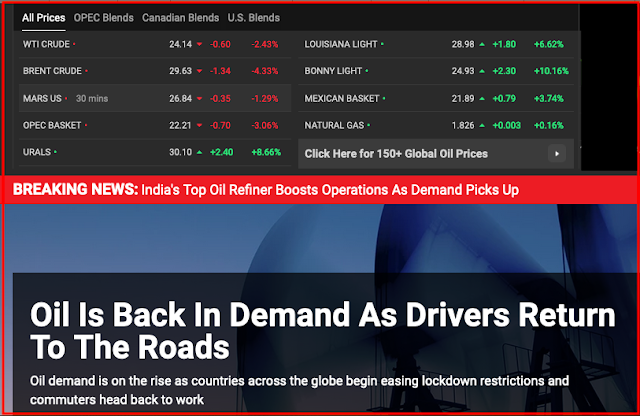 Saudi Arabia in deep doo-doo: see this post. Analysts are writing stories to fit "their" narrative, headlining that there was a "price rally" following Saudi's announcement that it was going to cut production.


In fact, no such thing, unless one calls a forty-cent rise on $20-oil a price rally. Give me a break. 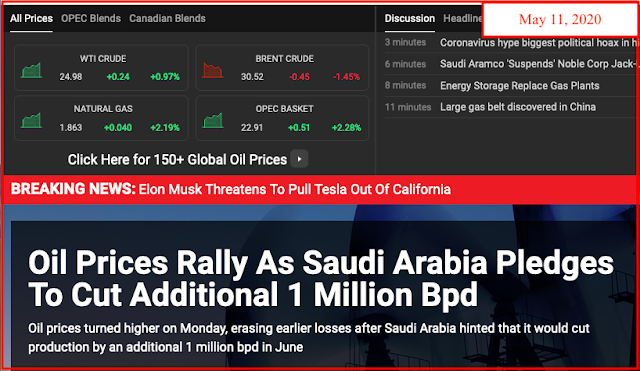 Saudi overplayed their hand, and I don't see an end to their problems for the next year or so, assuming they ever recover. This was a huge debacle on so many levels.


Offshore drilling company Noble Corp has said that its jack-up rig Noble Scott Marks, located offshore Saudi Arabia, will be suspended at the request of its client.

The rig is on a contract with Saudi Aramco, which, as Noble Corp. said in April, had recently requested for Noble to reduce the rig's dayrate from $159,000.

The offshore drilling contractor said Wednesday that the client had suspended the rig for a period of up to 365 days, with the suspension starting in the first half of May following the conclusion of the well in progress.

It did not provide info on the previous dayrate reduction request.

"During the suspension period, no dayrate will be paid. However, the company has the right to market the rig in pursuit of other work opportunities in the region," Noble Corporation said. The rig has a contract with Saudi Aramco until late October 2022.

Saudi and off-shore drilling: we've talked about this before but the fact that Saudi Arabia was even engaged in very, very expensive off-shore drilling when it only cost $5/bbl to lift oil onshore spoke volumes about Saudi's aging fields.

Medium to long term. Saudi says they will feel fiscally challenged for the medium term to long term. They did not get more specific. Most folks would suggest "medium term" means six months; long term, maybe a year or so. The Saudis have a peculiar way of looking at things, and"medium term" for them could certainly be measured in years. We'll see.

Quiet: I still think things are a bit too quiet in the Mideast right now. Iranian "friendly-fire" reported to kill nineteen over the weekend.

Wuhan flu: I've always maintained that no matter what you read, if you read enough, you will come across items in news articles that you might otherwise skip. It happens to me frequently.


Two weeks ago I was back in my "evolution" phase and reading three of my favorite books on the subject. Somewhere along the line I came across pangolins, but now forget where. And then, lo and behold, there are now news stories suggesting pangolins may hold the secret to controlling coronavirus. LOL.

Bats, hydroxychloroquine, vitamin D, clotting in lungs, and now pangolins. Links everywhere but this is one. Pangolins remind many of armadillos. Pangolins and aardvarks are Old World while armadillos, sloths, and anteaters are New World; the New World and Old World varieties are of different lineages.

Reading: I'm pretty much done with "evolution" for now. I am back into Scotch Irish history.

Tesla: I don't know where "it" stands, but it looks like Musk Melon could move Tesla headquarters to Texas pretty quickly.


Moving a manufacturing plant to Nevada, I would think, might take a bit more time. However, there are auto manufacturing plants in Texas, and my hunch there may be some unused capacity. It's hard to believe that Tesla would partner with an existing manufacture, say Toyota, but stranger things have happened. This, too, should be fascinating to watch.

Wuhan flu: some folks have gone from "flattening the curve" to "not one more death." The tipping point for re-opening state governments. When states have to start laying off government employees, and, teachers. Tea leaves suggest college football and profession football (NFL) could fall victim to Wuhan flu. NY governor Cuomo was big proponent of "not one more death." My hunch he won't be using that phrase any more starting this week. Just in: NYC lock down "likely" to continue into mid-June, which means the end of June, which means, "we'll re-evaluate in June, whether we need to extend through July."  By the way, for those who even look at Snopes any more, that site says it is "mostly true" that NYC's death rate is 250x that of Tokyo. "Mostly true. Wow. 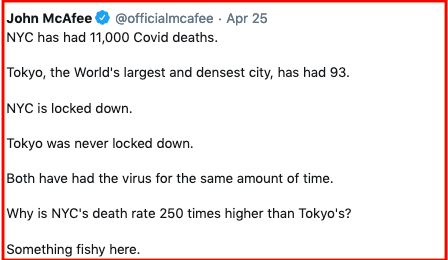 By the way, did VP Mike Pence show up for work today? Tweets over the weekend of on-again, off-again self-quarantining as more and more DC folks test positive for corona virus.


Speaking of which, assuming no vaccine (or a less-than-effective vaccine) and assuming the virus just doesn't fade away, almost everyone in American should eventually test positive. To date, I think the CDC says one million Americans have tested positive. That's over four months. Of course, testing is picking up, but at that rate -- oh, let's be generous -- let's say one million new positives every two months -- 300 million American / 2 months per million = 150 months before everyone finally tests positive.

Focus on Fracking: weekly edition has been posted. Section on plastics particularly long.

Say what? Fauci says folks should not be wearing masks. I can't make this stuff up.

Where's The Beef: Omaha Steaks "temporarily" out of many of its beef offerings; link here; years of ordering from Omaha Steaks, I've never seen this before; never, never would have expected it: 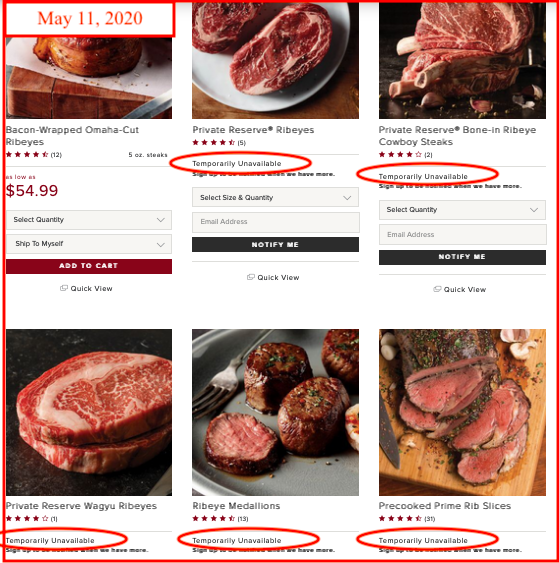 Headlines out of Saudi:
ICYMI: Saudi Arabia running out of money. Link here.  The last time Saudi tried to break US shale, they kept at it for two full years, 2014 - 2016. This time, they barely lasted a month. The definition of insanity.

Iraq: like to try to take advantage of this situation; Iraq has its own problems; government seems to be in disarray

Fake news: fake news has gotten so bad that The Bismarck Tribune now points out which of its postings on twitter link to "true" stories


On April 20, that fateful day in crude oil markets when the CME May contract for WTI at Cushing collapsed to negative $37.63/bbl, the number of contracts involved in the chaos was relatively small. So you might think that most producers sat on the sidelines, watching Wall Street paper traders writhe in stunning financial pain. But not so. Almost all producers saw their crude prices that day crashing in exactly the same magnitude. That’s because the daily price of the CME WTI contract is part of the formula pricing used in a very large portion of crude oil contracts in U.S. markets, both directly and indirectly. There are two formula mechanisms that are commonly used in crude oil sale/purchase contracts that are responsible for that linkage: the CMA and WTI P-Plus. These arcane pricing mechanisms are complicated, but in order to understand U.S. crude markets, it is critically important to appreciate how they work. Today, we continue our deep dive into crude oil contract pricing mechanisms.

The CME NYMEX WTI futures contract is the most liquid — or most widely and actively traded — commodity futures contract in the world, and is so ubiquitous that it also underpins domestic U.S. crude contract markets. It’s a strange symbiotic relationship, in that not only do cash crude prices heavily influence futures prices, but the cash contract price for most U.S. crude is indexed to the futures price. Differences between futures and physical trading, as well as the delivery mechanism that links the two markets, make pricing physical WTI complicated.