I won't be following the news tonight, and won't be opening any e-mail that is political in nature tonight. I may do a bit on the Bakken but mostly I'm going to be listening to Jerry Jeff Walker.

This was over at oilprice earlier today. For all I know, the article is still there. I haven't read the article, don't know what it's all about, but I can guess. OPEC is facing a crisis. (US shale may be facing a crisis, also, but that's a story for another time). WTI is flirting with $39 and trending up. OPEC basket is below $36 and trending down.

I haven't bothered to look why the OPEC basket is plunging (that could change by the end of the week), but think about it:

Iraq may be the world's third-biggest oil exporter, but its economy is cratering after the coronavirus pandemic sapped global demand for energy and caused prices to collapse.

The state's finances are so dire it can't pay teachers and civil servants on time, threatening a repeat of the upheaval that last year brought down the government and saw hundreds of protesters killed.

That's created a dilemma for 46-year-old Abdul Jabbar, a chemical engineer and career oil man who's now caught between the demands of an angry population and the pledges made to allies in OPEC.

The group of oil producers is trying to bolster a fragile market by reining in supply and it needs major producers like Iraq to toe the line. For Iraq, restraining supply carries a massive economic and political cost. But breaking ranks is risky too: it could mean lower prices for everyone.

Some Iraqis want the government to put them first by simply pumping more oil, a move that could unravel the finely calibrated output agreement; if a producer as significant as Iraq flouts the pact, there'd be little to stop smaller ones doing the same.

Libya: every time I see an analyst mention Libya, I roll me eyes, but I have to admit that right now, Libya is a real thorn in Saudi Arabia's side. Libya is not subject to quotas or cuts, and is now back to producing upwards of 800,000 bopd or about 10% of Saudi Arabia's production. Scary. For Saudi Arabia.

If Biden becomes president, "Katie, bar the door." The Biden wing is a huge Iranian supporter and the first thing Biden et al will do is lift sanctions.

So, this remains the most fascinating international energy story.

I've tried more than once to read Vladimir's Nabokov's Lolita. It becomes boring very quickly and very difficult to follow. It turns out a movie version exists. I watched the movie on TCM today. Absolutely fascinating. Then read the wiki "plot." I may try reading the book again.

In a long note like this, there will be content and typographical errors. In addition, some assumptions could be wrong. The permits are confidential. 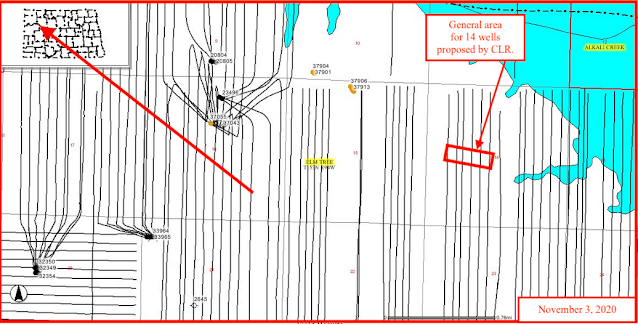 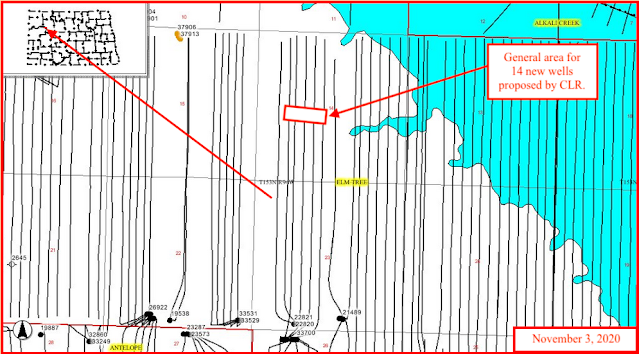 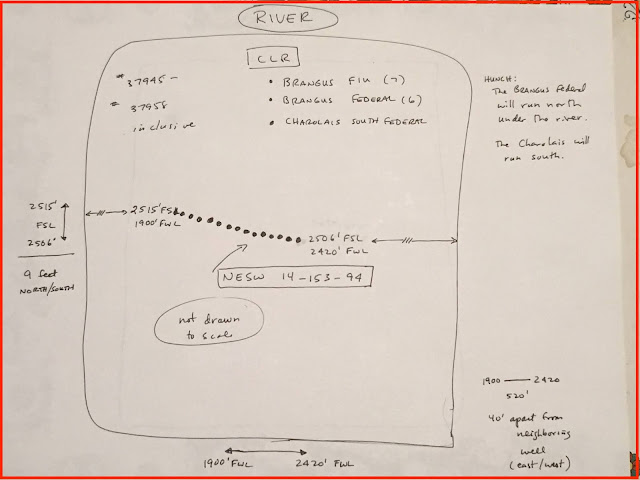 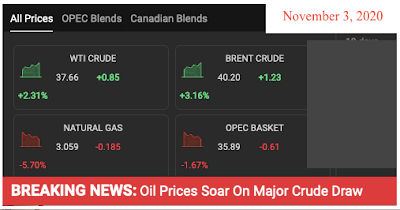 Lubbock, TX, is out in the middle of nowhere. It invented social distancing. Unless Jerry Jeff Walker showed up. But look at this. One of the smaller counties in Texas in terms of population, and Lubbock sits at the top of the list for new deaths reported yesterday. Link here: set filter to "yesterday," arrange list by "new deaths." Up plus 6.

Arranged by new deaths in past 24 hours: 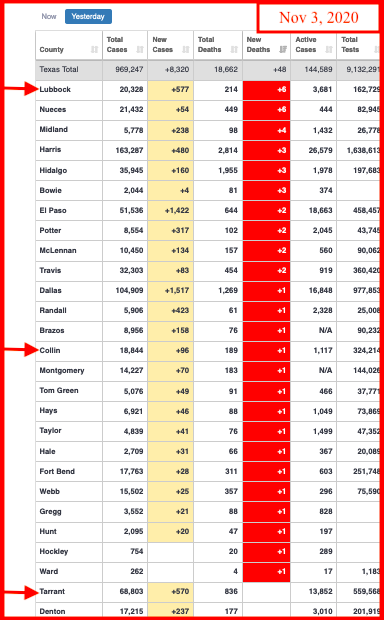 And at new cases, Lubbock County is at #3, trailing only Dallas and El Paso.

I don't know when I first saw it coming. Certainly it was by 2016. But OPEC is in deep doo-doo and the House of Saud is in extremis.

Aramco reported a net profit of $11.8 billion for the third quarter of 2020, down by 44.6 percent on the year as low oil prices continued to bite into its financial performance.

The company also said it had free cash flow of $12.4 billion at the end of the three-month period and declared a dividend of $18.75 billion for the quarter.

For the first nine months of the year, the hit from low oil prices and depressed demand was stronger. Net profit was down by close to 49 percent to $35.015 billion.

In oil production, the Saudi major reported an average daily of 9.2 million bpd for the first nine months of the year as it continued capping output in compliance with the OPEC+ agreement.

Earlier this year, Aramco declared an annual dividend of $75 billion. That amount, however, will not be sufficient to cover the Saudi budget deficit, Moody’s said in a report last month. Now, with oil prices still low and likely to go lower still if the surge in Covid-19 cases continues in Europe and the United States, Aramco’s earnings will take a bigger hit.

This means that the government in Riyadh will not be able to plug the budget hole with the Aramco dividend as it has done previously.

“The government is unlikely to be able to repeat the maneuver beyond 2021,” Moody’s said in the report. Aramco will have its own capital expenditure needs and its commitment to buy petrochemicals giant SABIC to look after, according to the ratings agency. 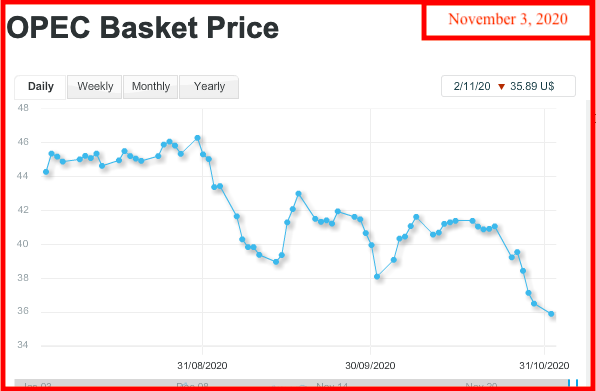 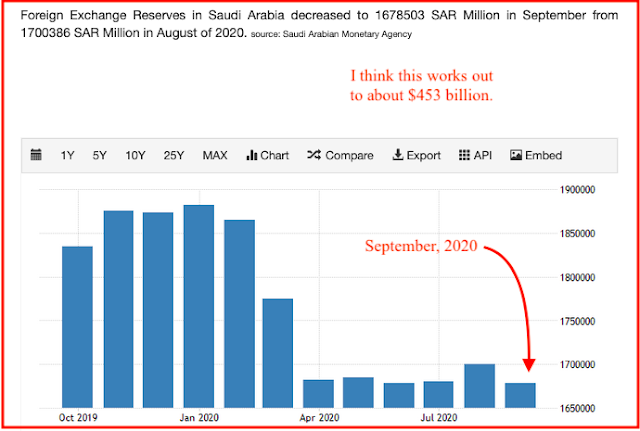 One Well Coming Off The Confidential List; OPEC Basket Plunges Below WTI -- November 3, 2020

2020 has been as anomalous as it can get for energy markets, but that’s especially the case for the LNG sector, which was battered by COVID-related demand destruction.

U.S. export volumes, in particular, experienced wild swings this year, going from steady increases and close to 100% utilization over the past few years as new export capacity was added, to operating at barely 30% of capacity this past summer as national lockdowns decimated demand and led to historically low gas prices abroad.

Contracted cargoes were canceled en masse for the first time since the U.S. began exporting in 2016, amounting to over 500 Bcf between June and September that was pushed back into the U.S. natural gas market and into storage. But these events only exaggerated what was already a growing risk; with each new train being commercialized, domestic markets are increasingly exposed to the demand swings and other fundamentals in the export markets it serves. Today, we look at how seasonal demand patterns in the U.S.’s primary destination markets could translate to increased volatility at home. 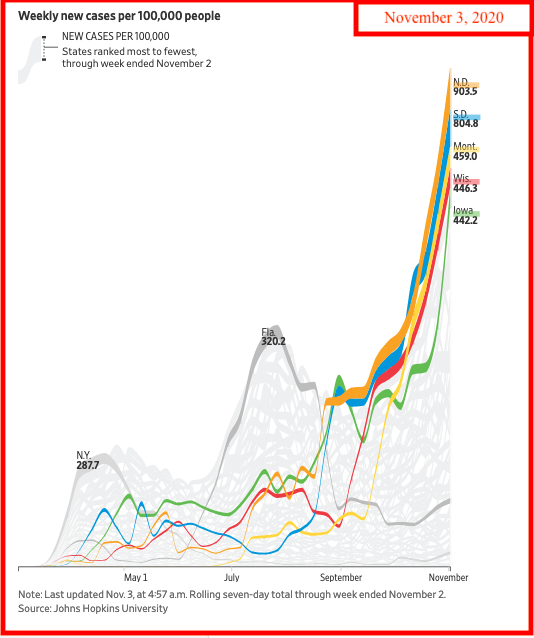