This takes us back to a comment from a reader and my reply to that comment over at the post on the June, 2019, hearing dockets. Original note archived.

A reader noted that Slawson was requesting to drop the number of wells from 22 wells to 2 wells in several spacing units. The reader was concerned that this had to do with changes in what geologists thought the Bakken could do -- whether 22 wells in one spacing unit made economic sense -- at least that was my take on the reader's comment. 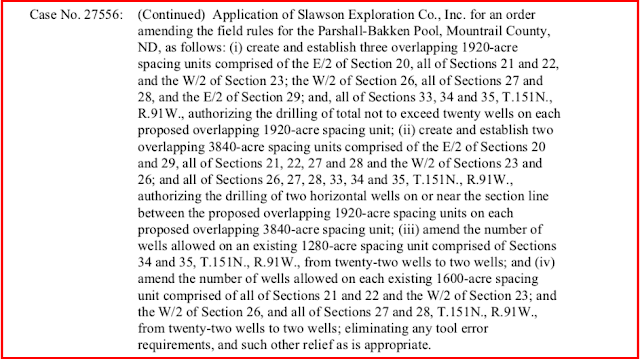 
In response to case #27556, a continuation case, on the NDIC docket for Thursday, June 27, 2019, request to amend previous submission from 22 wells to 2: hopefully this was just someone's twitchy fingers and not a serious miscalculation.

So, here we go: The hearing docket case was not a typographical error. I am being told that the case as published is correct, and that the original request for 22 wells on various spacing units was also correct.

So, before we go further.

It's my observation that the NDIC makes very few typographical errors in their daily activity reports. When they do make an error, it is generally of little "material" value, and it is corrected very, very quickly, usually within one business day.

So, I was greatly remiss suggesting there might have been a typographic error in Case #27556.

The case is accurate.

The bottom line: I am being told that this has nothing to do with the geology or the prospects of the Bakken. In that regard, nothing has changed. Slawson is making the change for other reasons, to include but not limited to: minimize the chance of leaving stranded oil by less-than-optimal drilling / completion strategies. This drilling unit is under the water and Slawson is looking for an innovative method to reach the farthest edges of the unit.

Slawson filed for new, extended spacing units but EOG would be the operator. Slawson is asking the NDIC to extend the EOG original 2.5-mile spacing units to three miles to include acreage that would otherwise be stranded.

Slawson had previously extended its 2- and 2.5-mile spacing units to 3 and 3.5 miles to capture some of the acreage from the west and is just asking that EOG extend their laterals from the east shore to do their part to capture the rest.

Slawson has already drilled 24 three- and 3.5-mile laterals to capture most of the middle of the lake acreage. So now if the NDIC agrees with Slawson, EOG will capture the acreage that was too far for Slawson to reach.

The Bakken never ceases to amaze me.
Posted by Bruce Oksol at 2:45 PM No comments:

I used to say that these polls don't mean a thing. I'm wrong. These polls will correlate directly with campaign contributions, and they will determine who is on the debate stage. The trends are important.

So, the previous poll: May 29, 2019:
Today, new poll:
This is quite incredible. Shows how the media is biased and tries to skew "stuff" that doesn't exit. Yes, the mayor may have $7 million and may be hiring new staff, but his polling numbers are going nowhere. Wait until his donors see the most recent numbers. LOL.


Buttigieg’s poll numbers have risen along with his payroll. A POLITICO/Morning Consult poll conducted from May 20 to May 26 found him tied for fourth place among the nearly two dozen Democratic candidates running for president at 7 percent, along with Sen. Kamala Harris. Ahead of those two, the poll found, are former Vice President Joe Biden, and Sens. Bernie Sanders and Elizabeth Warren.

Of note:
Top  international non-energy story: Pemex to get even more tax breaks;

CLR Weydahl Wells In Corral Creek Have Been Updated -- June 1, 2019

The CLR Weydahl wells have been updated; this is an incredible group of wells for CLR. Well worth studying.
Posted by Bruce Oksol at 9:18 AM No comments:

A Couple Of CLR Mildred Wells Show A Slight Jump In Production -- June 1, 2019

A couple of Mildred wells showed a small jump in production. In the big scheme of things, doesn't amount to much but again, another example of the unpredictability of the Bakken. That "decline rate" continues to be of interest.
Posted by Bruce Oksol at 8:55 AM No comments:

This well has just been fracked and is reporting:

Other wells of interest now that this newest Morris well is reporting:

Graphics for the Hess AN-Bohmbach wells have now been posted.

See this post for background.
Posted by Bruce Oksol at 8:12 AM No comments: 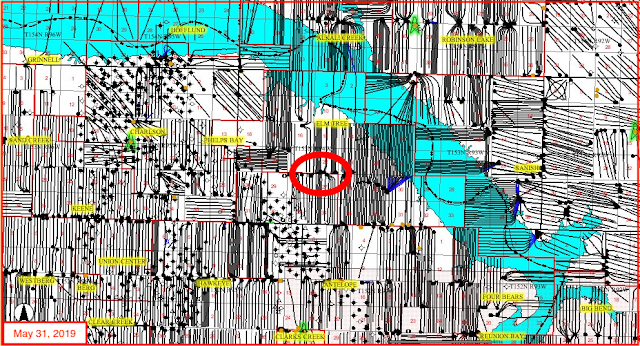 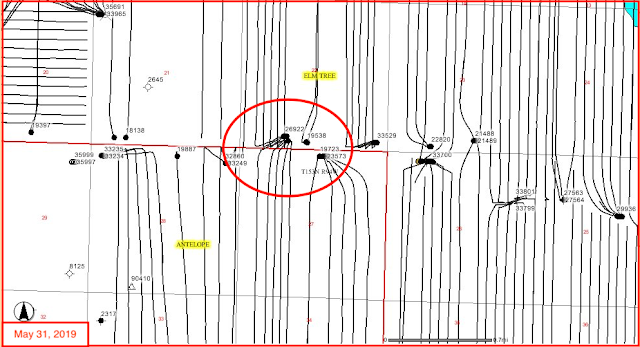 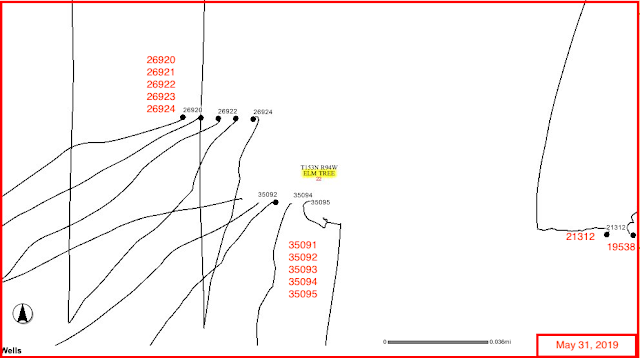 
The "oil and gas division" of the NDIC was not involved in this MRO case. The Marathon decision was by the ND Board of Trust Lands. This Board among other duties manages the state-owned minerals [as well as surface ownership and other responsibilities].

This is the link that takes one to minerals management by the Board: https://www.land.nd.gov/mineral-auctions. This is a separate entity from the Oil and Gas Division of the Industrial Commission.

My comments regarding my appreciation for the NDIC still hold. And it sounds like the ND Board of Trust Lands also deserves my praise for moving things along without unnecessary delays.

One of the "things" I've appreciated about the NDIC is this: it's my impression the NDIC moves along at a pretty good clip, not taking months or years to make a decision. Most recent case in point: MRO and request for another extension on a lease. [This is an error: see June 3, 2019, update above.]

I might not have the exact dates right but for armchair pundits it was on/about May 30, 2019, that we started reading the story in media outlets. The next day: boom, the decision.

Right, wrong, or indifferent (and in this case, it's hard to disagree with the NDIC), MRO got their answer.

On another note, MRO did have a pad in the area they could have used to solve their problem. The location of that pad was not good and a well drilled from that pad would have left up to 25% of the oil in the drilling unit "stranded" but at least it would have "bought them time." They would have held their lease by production and could continue to work the issue of a better location for a multi-well pad.

Posted by Bruce Oksol at 6:34 AM No comments:

From The Deplorable Climate Science Blog: 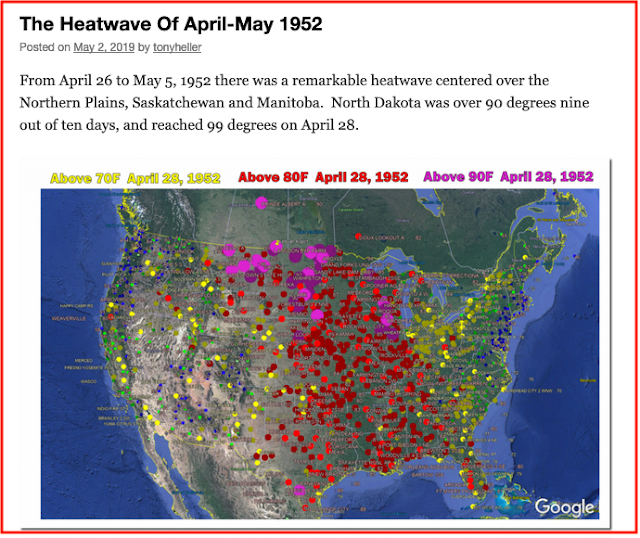 I don't remember that particular month of May but I do remember all the "heat" stories coming out of Chicago and NYC back in the 60's. Many, many people (mostly the elderly) dying of heal-related issues. We really don't hear such stories any more.

Posted by Bruce Oksol at 6:21 AM No comments: