Two new permits:
Interestingly, of nine wells approved for "tight hole" status (confidential), all nine were CLR wells, and seven of them already had an IP. This may be more common than I realize; I generally don't follow "wells approved for tight hole status" but this one caught my eye:

From above, the two that did not have an IP:
Four permits renewed:

Posted by Bruce Oksol at 4:07 PM No comments:

Hubbert's peak oil theory?  Another nail in that coffin. Wasn't the Haynesville old and dying? Yeah, I know -- Hubbert -- it was oil ...


Gas production in the state of Louisiana in the southern U.S. will soon reach record heights thanks to an outstanding resurgence of the Haynesville shale play. 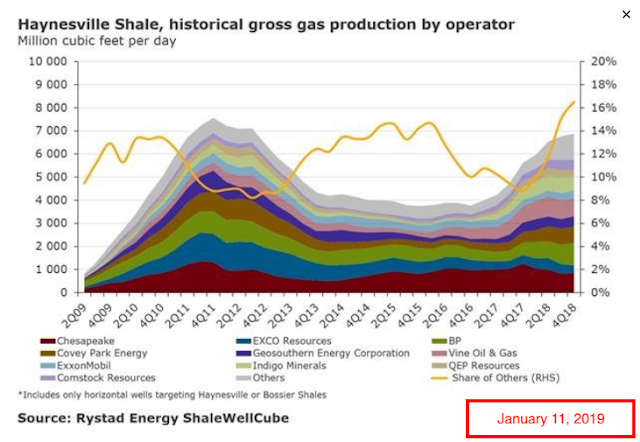 After every presidential speech "snap" polls are always taken.

There have been no "snap" polls published following President Trump's speech (January 8, 2019) regarding "the wall."

This astute observation was made by someone else, not me.

It appears that President Trump has become more defiant over time. He probably would not "dig in" to the extent he has if internal polls did not suggest he was winning -- at least the way he interprets the polls.

This is a most interesting poll (the results, not the poll).


About half of voters, or 47 percent, blame Trump for the shutdown, according to a recent Politico/Morning Consult poll. A third of respondents blame Democrats in Congress, and 5 percent say it rests with congressional Republicans.

Link here. The link is at the most liberal US newspaper.

The same percent of Americans who consistently say they "hate" Trump (47%) is exactly what we see regarding the shutdown. That tells me he has 100% support of the 49% - 51% of the American public that voted for him. He sees the same thing.

The 5% that are said to blame Republicans seems very confusing, at least to me. I suppose those who say the Republicans are to blame are suggesting that the US Senate should be able to override a Trump veto. I don't know. That seems to be splitting hairs.

The fascinating question is what do the other 15% think? The 47%, 33%, and 5% add up to 85%, leaving 15% unaccounted for. That's a fairly large number, 15% for such a contentious issue. Fifteen percent undecided/don't  know/don't care/didn't understand the question.

I think most folks would agree the smartest man in the US Congress (House/Senate) is Senator Mitch McConnell.

Senator Schumer has confirmed that Mitch McConnell is not going to get involved in this debate (at least for now -- questions are now being asked: how long can Mitch McConnell sit this one out?).

When I see the smartest man not getting involved in this debate speaks volumes. He knows he doesn't have the 20 GOP votes in the US Senate he would need to override a Trump veto.

Best news for Trump: Senator Bob Corker (Tennessee) and the Snowflake, AZ, senator, Jeff Flake, are no longer in the US Senate. Their ankle-biting would have gotten more press than the press that Shelosi gets.

The Pope has been more vocal than ever on the "evils" of capitalism and President Trump, but he has not said anything about Trump's observation that the Vatican has the highest wall of all. A wall that Shelosi calls immoral.

The Pope knows that walls work.

Perhaps among the most outspoken anti-Trumpers in California, Cher says: give the money to Trump.

Fell into the trap.

Forgot how to negotiate.

When invited into the Oval Office to discuss the wall, Nancy made the mistake of replying to Trump's first question with a resounding "no." She should have said, "we will consider funding for the wall if it keeps negotiations open." But if her starting position is "no, not open for discussion" that will be the end of discussions.

President Jimmy Carter was the first. However, the "one-day" closures by Carter, Reagan, and GHW Bush were, for the most part, occurred while negotiations continued. It was just a matter of "dotting i's and crossing t's" -- Americans knew the government shutdown was only a technical "thing."

The first 3-day shutdown by Trump falls into the "Carter-Reagan-Bush-era" shutdowns. 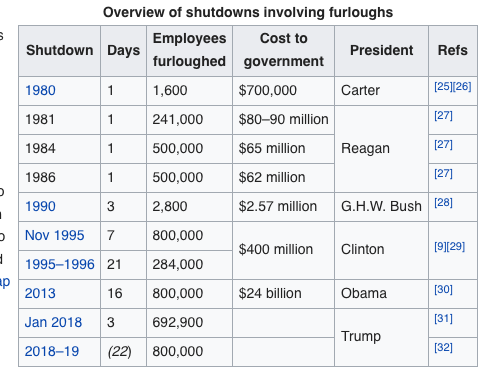 Obama's "border chief," Mark Morgan, supports Trump 100% on the issue of "the wall." From The Washington Post. If it were not Trump advocating the wall, but rather Hillary, you can bet that Obama would be supporting Hillary.
Posted by Bruce Oksol at 11:36 AM No comments:

See these earlier posts regarding the Arkin well:
The well:
Production profile: