From a different blog -- for the granddaughters.

When asked, my wife, May, said her moveable feast would have been when she was with her family as a child in Japan. Her dad, US Army enlisted, was assigned to Japan when my wife was eight years old; they were there for two years at a small Army camp. My wife remembers that as the happiest time in her mother's life. Her mother, Japanese, was a war bride after WWII, during the Korean War, when she married my wife's Hispanic father. She was Buddhist; he was Catholic.

She was 18 when they got married, move to the United States, but a few years later were reassigned to Japan, her home country.

While in Japan, they lived in the nicest house they had ever lived in (one needs to remember my father-in-law's enlisted rank in the US Army at that time) -- a two-story duplex. May's mother would take the both of them to get their hair and nails done at the local beauty shop. They had a maid, Todosan who always burned the pancakes which my mother loved: crispy, "burned" pancakes. My wife remembers taking walks along the "water" which she thinks was the ocean (or more accurately the harbor), because of the cliffs, and not a river.

The general area of Kure, southeast of Hiroshima: 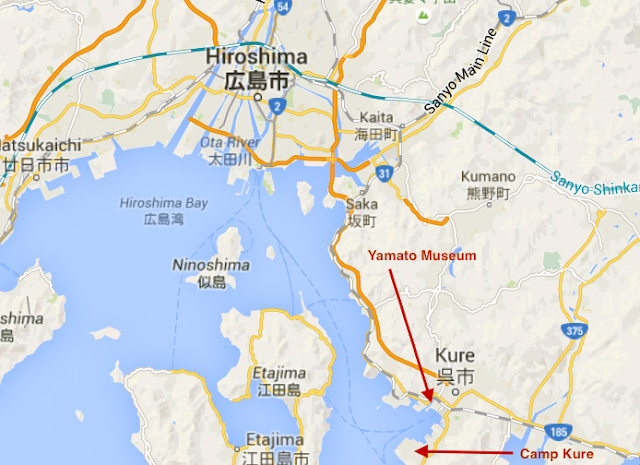 My wife remembers Camp Kure being in the Japanese town of Nijimura but yet one cannot find it on the map. In addition, there are very few google hits regarding the city of Nijimura, but it does exist.  It appears to have been swallowed up by Kure. 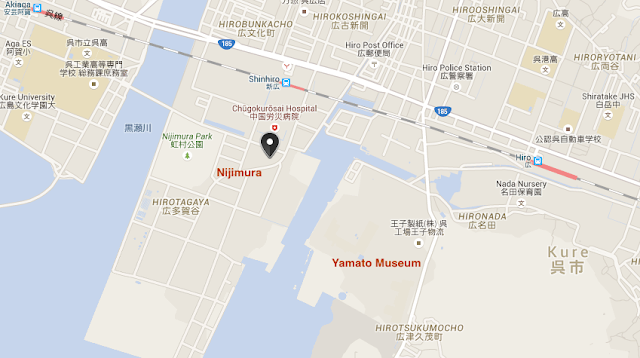 At wiki: Kure was the home base of the largest battleship ever built, the Yamato. One of the bases of the Japan Maritime Self-Defense Force (JMSDF) is still located there, its former center became the JMSDF Regional Kure District. In addition to a hospital for the Marine Self Defense Force, there was also the Escort Flotilla (destroyers), Submarine Flotilla and the Training Squadron in the Kure District. A museum with a 1:10 scale model of the Yamato is located in the city.
Posted by Bruce Oksol at 7:00 PM No comments:

Finally! The API reports a huge weekly draw. Inventories drop 6.27 million bbls, but it means nothing if the EIA does not corroborate tomorrow.

Posted by Bruce Oksol at 6:11 PM No comments:

BP is currently producing about 300,000 boepd from the GoM. BP is GoM's biggest producer.

Originally announced in 2013 as a project of Texas-based ZEEP Inc. and New Zealand-based Todd Corp. Ltd., SLM—which is now majority-owned by Todd—will pursue the JV methanol project with a Houston-based subsidiary of SABIC.

Preliminary work on the project began last year at a 1,500-acre site along the west bank of the Mississippi River, about 8 miles south of the Sunshine Bridge, with formal construction on the complex to possibly begin later this year subject to pending negotiations between SLM and SABIC.

The methanol plant would have a proposed production capacity of 2 million tonnes/year to support customers both in the US and internationally.

The methanol project would create 75 direct jobs with an average salary of $71,400/year, plus benefits. In addition, the project would result in an estimated 350 permanent indirect jobs while generating 800 construction jobs at peak building activity.

Will atmospheric CO2 replace GDP as proxy for how well the economy is doing? Look at this:


US carbon dioxide emissions rose by 3.4 percent in 2018 even as coal plants shut: The increase, the biggest in eight years, was in part driven the strong economy, with emissions from factories, planes, and trucks soaring.

US cancer deaths fall for 25th year in a row: Lower smoking rates are translating into fewer deaths, and advances in early detection and treatment also are having a positive impact, according to the American Cancer Society. But obesity-related cancer deaths are rising, and prostate cancer deaths are no longer dropping.

The above from Chesto at The Boston Globe.

Something tells me these Syrian refugees would like a little less talk and a lot more action from:
Global warming hits Lebanon.

I always wondered why the Lebanese felt so at home in northwestern North Dakota. Now I know. Thank you, twitter. Unfortunately, I don't see any smoke coming from any chimneys in the photo below. 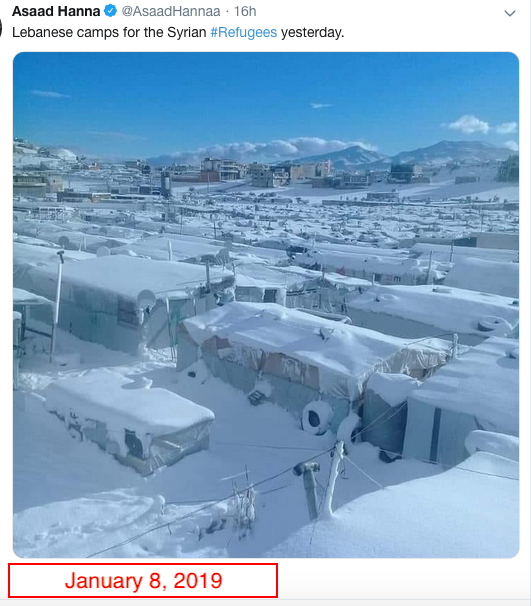 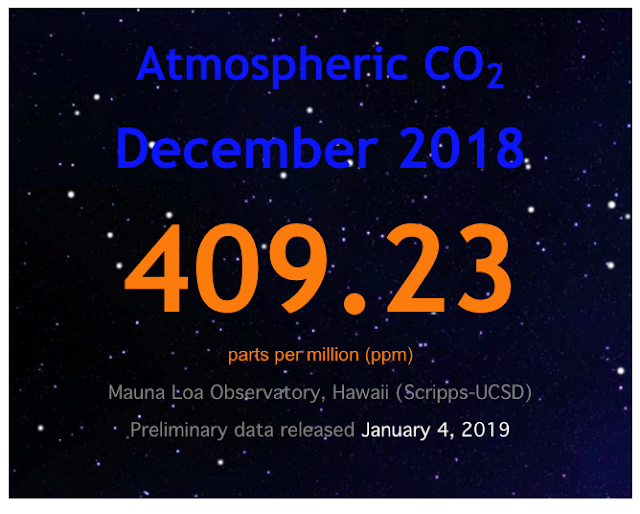 Nice Jump In Production After Coming Back On Line -- Oasis' Crane Federal In Willow Creek -- January 8, 2019

Earlier today, I posted the results of the one well that came off the confidential list today. Quite a distance from that well, but running parallel to it was #21903 which showed a huge jump in production in September, 2018, time frame:

What did Hubbert say about oil wells .... bell shape curves or something to that effect?

And, then, of course, that dreaded Bakken decline rate.

More on this well, a DUC that was reported as completed yesterday:
From the NDIC files:
Disclaimer: a reader's note suggested I needed to post a disclaimer. Only because my readers have shown me some mercy, I have never gotten a complaint that I post some YouTube videos too often. Thank you. So, this excuse, preempting any complaints, as I wrote a reader:

Yeah, I probably post some YouTube videos too often. But I sometimes need to play some music videos really, really loud (headphones) to drown out the demons that tell me to quit blogging and get a life. LOL.

Hunter S Thompson would know what I'm talking about.

From this site, one of my favorite quotes of all time:


“Music has always been a matter of Energy to me, a question of Fuel. Sentimental people call it Inspiration, but what they really mean is Fuel. I have always needed Fuel. I am a serious consumer. On some nights I still believe that a car with the gas needle on empty can run about fifty more miles if you have the right music very loud on the radio.”

Alberta: trying to find a solution. Is building a refinery the answer? -- Bloomberg.


QEP Resources has recently tried to develop itself into a pure-play Permian company by divesting its assets in the Williston and the Haynesville. Both deals are currently still pending closure.

... an approximate value of $21,000 per acre, but Stifel estimated the fair market value for QEP’s Permian assets to be between $30,000 and $40,000 per acre. Therefore, Stifel does not anticipate Elliott’s offer to be accepted.

Only one well comes off the confidential today -- Tuesday, January 8, 2018:
Active rigs:


It’s so ironic. New England is only a stone’s throw from the burgeoning Marcellus natural gas production area, but pipeline constraints during high-demand periods in the wintertime leave power generators in the six-state region gasping for more gas. Now, with only minimal expansions to New England’s gas pipeline network on the horizon, the region is doubling down on a long-term plan to rely on a combination of gas liquefaction, LNG storage, LNG imports and gas-to-oil fuel switching at dual-fuel power plants to help keep the heat and lights on through those inevitable cold snaps. Today, we discuss recent developments on the gas-supply front in “Patriots Nation.”

Well, like it or not, the New England Patriots (11-5) are champions of the AFC East (again) and are in the playoffs for the 10th year in a row. Just as reliably, winter has come to Boston, Hartford, Providence and other big energy-consumption centers in the region. Nothing major yet in the way of snowstorms or frigid temperatures, but there’s been enough cold days and nights to serve as a reminder that while New England has sufficient gas pipeline capacity to meet the region’s needs for most of the year, its pipeline network can max out when the weather turns Siberian. When that happens, there typically isn’t enough pipeline gas available to power many of the gas-fired power-generation units.