Actually, the active rig count was 39 at least at one point during the day one year ago, February 17, 2016 (the number of active rigs are tracked here):

Posted by Bruce Oksol at 6:36 PM No comments:

Later, 8:08 p.m. Central Time: seeing the "Make America Great Again" rally in Florida today -- my immediate thought -- before this is all over, the press and President Trump are going to be great friends, agreeing to disagree, except for a few really, really alt-right reporters. But as in any negotiation, he and they will meet each other half-way. Both gain from the "interchange." Ratings have probably never been higher for talk shows, on both sides.


Original Post
The seven stages of grief:
Four years may not be long enough for some people to get through all seven stages; if not, another four years might be necessary. LOL.

Professional politicians, on both sides of the aisle, were able to move through steps 1 and 2 very, very quickly. These professionals quickly moved into "bargaining" ("Schumer obstructionism").

My hunch is that most on the left (and all alt-left folks) will get to the sixth stage and then find themselves in a "never-ending stage-5-through-stage-6 loop."

Where we are now:

From David Tuan, Williston, ND, City Administrator at this link.
Posted by Bruce Oksol at 1:20 PM No comments:

Later, 1:12 p.m. Central Time: Scott Pruitt was confirmed. Talk about an incredibly busy day for the president. He flies down to South Carolina. Tours the new Boeing 787-10 Dreamliner. He took his two grandchildren on the helicopter that he flew on while their parents flew on the other helicopter. How much fun was that? Now, as I understand it, he will fly down to Mar-A-Lago. I thought he was going to sign another executive order today, but maybe not.


Original Post
"They" say that the "EPA" executive order that President Trump will sign later today -- if Scott Pruitt is confirmed as the head of the EPA -- will literally suck the air out of the room.


President Donald Trump’s promise to help the coal industry could be facing its first big test: the decision earlier this week to close a large Arizona coal-burning power plant, and a demand that Mr. Trump prevent that shutdown.

Majority owners of the Navajo Generating Station in Page, Ariz., one of the biggest coal plants in the country, said this week they won’t keep running the plant after 2019 because it is more economic to buy natural-gas-fired electricity than to generate power by burning coal. These kinds of market-driven decisions, rather than regulations, have driven down coal use across North America in recent years.

The plant, which opened in 1974, has also been under growing pressure to reduce its emissions.

But the president of the Navajo Nation—whose reservation is home to both the plant and the coal mine that serves it—says his tribe opposes the plant’s closure and the loss of 800 jobs that depend on it. 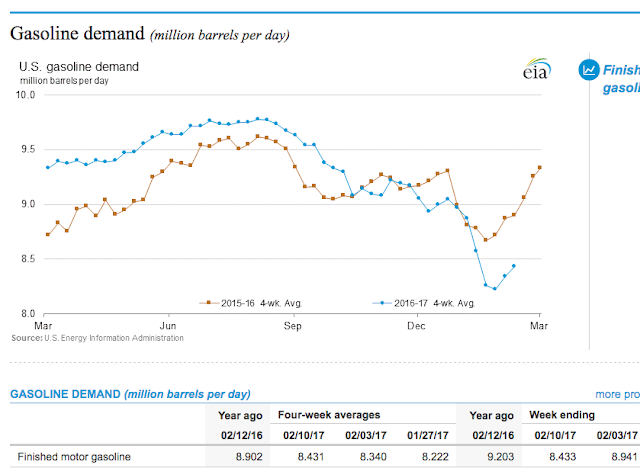 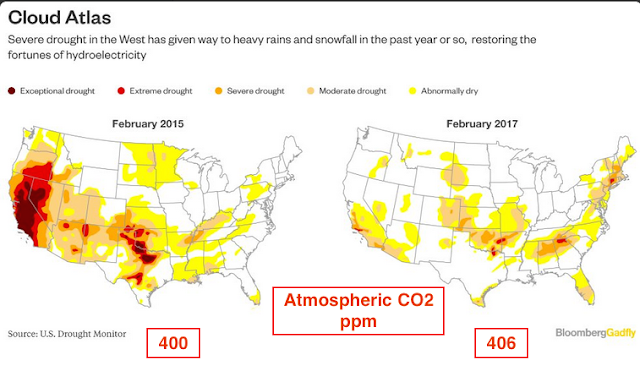 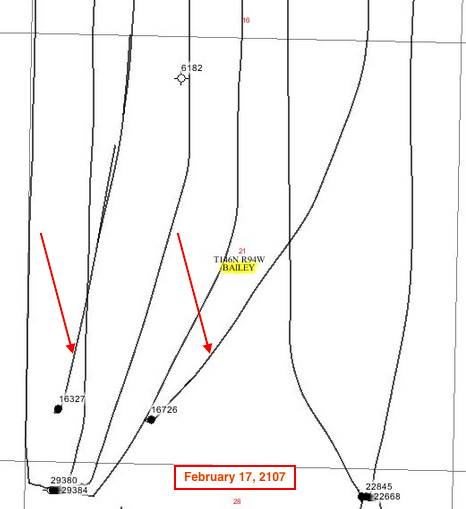 The graphic raises another obvious question. What about #16726?


But in this case, it was a re-frack. It was fracked 12/10 - 12/2015, according to FracFocus. The file report shows that it was a 30-stage frack, 3 million lbs of sand re-frac. The reason this well was off-line so long was because a sundry report received November, 2014: "Marathon has decided to extend the lateral in this well prior to running a liner with frac sleeves in this wells beefore fe-fracing this well. The liner will be run from approximately 9,900' MD to the new TD at ~20,931' MD." 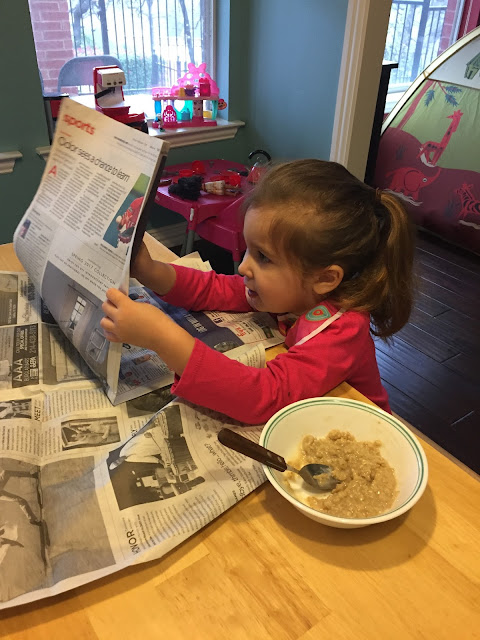 Taken by her grandmother who is taking care of the granddaughters this weekend while both parents are at work: one out of town for three days; the other with four 12-hour shifts back-to-back. These photos are not posed. While this was going on, I was driving the older granddaughters to school.

Boeing: no union at Charleson, SC, facility -- employees overwhelmingly defeat effort to unionize. President Trump will visit the facility later today. After he signs an EPA executive order that will suck the air out of the room -- Fox News.

Lied to our faces. a talking head responding to New York Times says folks should have done a psychiatric analysis of President Obama -- telling us "he lied to our faces." I wrote that years ago; someone must be reading the blog -- "The Obama legacy: knowing that you lied straight-faced while I cried, still I look to find a reason to believe." (see first comment)


A Michigan utility has withdrawn its plans for a $15 million statewide electric vehicle infrastructure network following concerns raised over the past several months by state officials, clean energy advocates and the private sector.

Filed in March 2016, Consumers Energy’s plan was the first significant proposal by a Michigan utility to promote EV adoption. It called for 810 fast-charging and standard AC-charging stations in major metro areas across Consumers’ Lower Peninsula service territory. The proposed capital costs were $6 million for 60 DC fast-charge stations and $9 million for 750 AC stations, to be funded by ratepayers.

When I first read this article, I thought this initiative failed because the state was broke, but I was surprised that the environmentalists seemed to be the least cooperative. This suggests that the three parties involved each wanted a bigger cut of the financial pie. When the parties could not accept other parties getting a bigger share of the pie, they were unable to come to a compromise. If a relatively small state like Michigan can't get this done -- does anyone really think California can do this?

Rolling Away: if you don't subscribe to Rolling Stone you probably have not noticed that the magazine is going the way of the Cheshire Cat. The magazine has shrunk in size (width x length), and is incredibly thin. It also has very, very few ad pages; I think it's in trouble. This week issue is a double issue RS 1281/1282 and this is Rolling Stone's 50th Anniversary year. The double issue has fewer pages than any issue I've seen. Big story: another multi-page look at Bob Dylan. Must be a really, really slow news period in music. Thinking about it, I did not even see anything in the entire issue regarding the biggest music story of the decade: Apple. If there was an Apple iTunes ad (and I'm sure there was) I missed it. The lead story: Bruce Springsteen takes on Donald Trump. Okay. That will sell a lot of issues.

Press conference: "everyone" loved it -- even those who don't particularly like President Trump. I was fortunate enough to have had a very, very close friend during graduate school who was from New York City, and then, again, an incredible USAF commander friend, who was also from NYC. One really needs to know the pugnaciousness of a typical alpha male from NYC to understand that press conference. I believe the president when he says he was having a lot of fun. He only appeared angry and serious because he "was an actor on the Presidential stage." I am surprised that The New York Times couldn't figure this out.

Among Republicans: 87% approval. Highest ever for a Republican president. Gallup. 9% approval rating among the opposition party.

Kidding? Kid Rock and Ted Nugent are both considering running for the US Senate. As Republicans in a Democratic state.

CNN: "fake news" is now "very fake news" -- President Trump. This one was great. Less than 24 hours earlier, WH CNN reporter said the fix was in -- that the president would no longer call on CNN or any other "mainstream media" outlets. Yesterday, President Trump called on CNN and let the journalist ask as many questions as he wanted -- and was completely owned by the president. Afterwards, the reporter said he loved the "give and take." Mostly he "gave," Trump "took."
Posted by Bruce Oksol at 6:30 AM No comments:

February 18, 2017: Prince Salman's plan hitting lots of roadblocks. I wonder what the Las Vegas odds are on this IPO?

Bigger, better: Fiat Chrysler will lay off 3,200 workers temporarily in Toledo while they re-tool for the next-generation Wrangler.  New investment: $700 million.

North Texas economy. Recently I've talked about the incredible economy around the DFW. Here's another example in this month's transportation update: the main highway along the south side of Grapevine/the north side of DFW/the north gateway to the airport -- huge project -- bridges, and highway lanes added; should be complete by April (2017); when complete the highway will be widened from 4 lanes to 6 lanes -- this portion is well west of the airport; cost $25 million. Meanwhile, the main highway along the east side of Grapevine, northeast of the airport, and the gateway to the airport from the north, is also being expanded, and should be completed by September (2017); when complete the highway will be widened from 4 lanes to 10 lanes; cost $60 million.  Another highway on same side of town, 4 to 6 lanes; construction has just begun; project to take three years; $40 million. In bullets, between Grapevine/DFW:
Rumor: by the way, regarding the highway update above, that highway being expanded to 10 lanes -- original plans by the state were to widen the highway to 26 lanes -- studies of future needs suggested 26 lanes would be needed. The city said no: the city couldn't "give up" that much land. Interestingly, with turn lanes, exit/entrance lanes, frontage lanes -- awful close to 26 lanes.

Peak Demand?  Are the Canadian oil sands a bust? High costs, low prices and tough new environmental rules forcing companies to cancel plans to produce oil. In a signal that the threat is growing more serious, Exxon Mobil Corp. is expected in the coming week to disclose that as much as 3.6 billion barrels of oil that it planned to produce in Canada in the next few decades is no longer profitable to extract.

Not so fast: Encana boosts capital spending by 50% amid oil recovery. Reuters via Rigzone.

Permian: can other basins ever catch up to the Permian's prosperity?  A Rigzone story.

Amazon. No, not the mail-order company, but Brazil. Russia's Rosneft starts drilling first exploration well in the Amazon (Brazil). Reuters via Rigzone.

DUCs: sooner or later, we should see more fracking. A reader's comment regarding one operator in the Bakken:


Moving to six rigs, 25 refracks planned in the Bakken. Hoping to have most of their production delivered on pipe. Major change in one or two quarters, must believe economics are now in their favor. I think they finally realized that more sand and sections per well is the answer.

If you thought "repeal and replace" ObamaCare would be tough, the tea leaves suggest that will be child's play compared to the Saudi Aramco IPO. From Reuters:
This IPO could still be scuttled, scaled back, or simply another "utility" with huge "regulation" by a 15th-century medieval theocracy.


After being down all day, about 60 - 80 points down all day, somehow the market managed to eke out a 5-point gain for the day, setting, of course, another record for the Dow.

Taser: body cameras.
Posted by Bruce Oksol at 6:24 AM No comments:


RBN Energy: strategic petroleum reserve add-ons, and why they're needed.

Scott Adams: how to evaluate a president.

Rasmussen daily presidential tracking poll: 55%.
Posted by Bruce Oksol at 6:21 AM No comments: