Taking advantage of all that free sunshine, Saudi's investment in solar energy is starting to pay off. 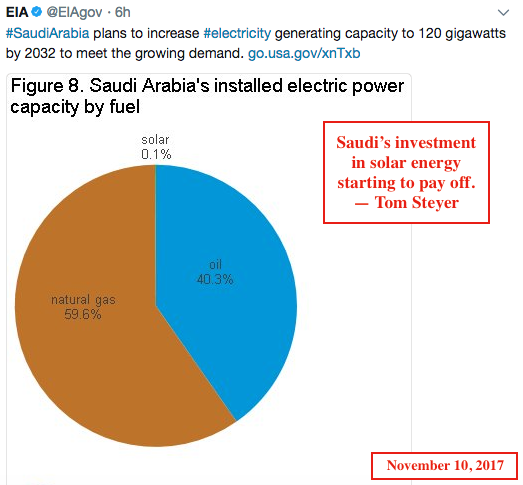 As for renewables, he sees solar as the answer for the future. He envisions the kingdom in the future being able to export the btu-equivalent of 7 million bo/d worth of solar.

Really? Saudi recently canceled a huge solar energy initiative because it was short of cash. But when they do start exporting 7 million bopd worth of solar, that's going to be one huge and very, very long transmission line.

Well, this makes it easier. Katie Ledecky has her own web page. To the best of my knowledge, this is something new for Katie.


Exxon Mobile Corp. shares could be headed higher by nearly 9 percent, while Chevron Corp could be heading almost 13 percent higher.

The rise can be tied to a technical breakout in the price of Western Texas Intermediate Oil prices. At $57 per barrel, WTI oil has officially entered breakout territory, and that means oil prices could rise by another 9 percent, towards $62 a barrel. If that should happen, the stock prices of Exxon, Chevron and the sector will increase as well.

The breakout that is occurring in oil can be seen in the chart at the link, when the price of oil closed above $54 per barrel. With that happening, $54 will now act as support should there be a pullback in the price. Given the length of time oil has stayed below $54, that price is likely to serve as a significant and robust support level.


Chinese and Alaskan officials signed a five-party, $43-billion joint development agreement for the Alaska LNG project on November 8 in Beijing. US President Donald Trump and Chinese President Xi Jinping were present for the signing ceremony at the Great Hall of the People, where other deals between the two countries were announced.

The historic signing is the most significant step toward finally monetizing Alaska’s vast natural gas resources. China Petrochemical Corp. (Sinopec), CIC Capital Corp., and Bank of China agreed to work with Alaska Gasline Development Corp. (AGDC) and the state government on LNG marketing, financing, investment modeling, and establishing China content in Alaska LNG, and get a periodic result by 2018.


Venezuela is set to pump the least oil in almost three decades, just when it needs petrodollars the most.

Output is expected to slump to 1.84 million barrels a day next year, the lowest compared with official government data since 1989.

Rig counts hit a 14-year low in October, as drilling companies including Schlumberger Ltd. reduce their exposure in the nation due to unpaid bills.

Owner of crude reserves larger than Saudi Arabia’s, Venezuela is teetering on the brink of default. Production of oil, the key commodity that brings in badly needed dollars to service Venezuela’s debt, will shrink for the seventh year.

It’s not only that output is declining, says Thomas Olney, an analyst at consultant Facts Global Energy. Quality is going down as well, chipping away at revenues for state-owned oil company Petroleos de Venezuela SA.

The following words, names or phrases were not mentioned in that article on Venezuela: 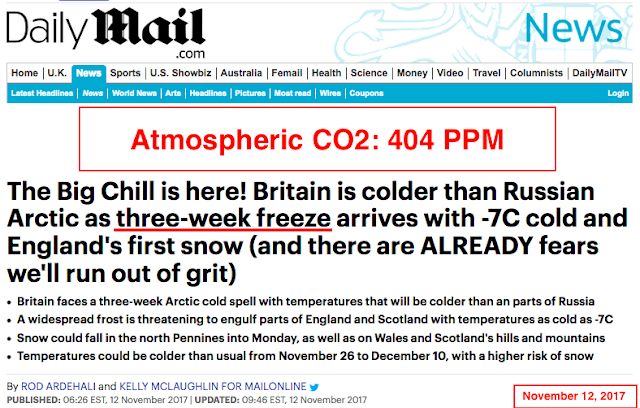 What we're going to be talking about over the weekend. I posted this yesterday -- the Arctic blast -- and now this screenshot from the Drudge Report this evening: 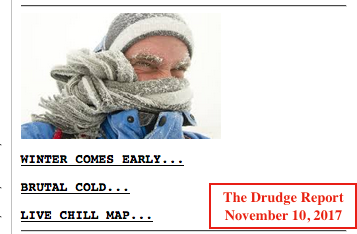 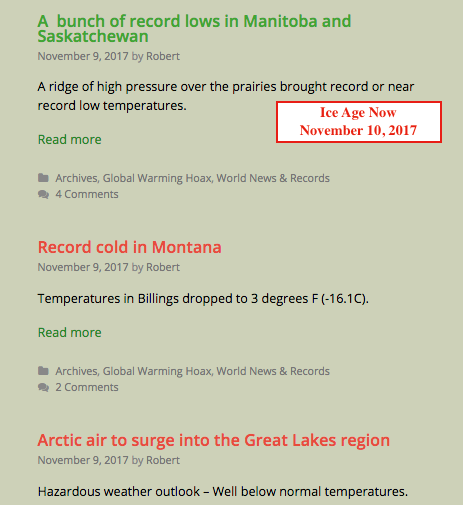 Posted by Bruce Oksol at 4:00 PM No comments: 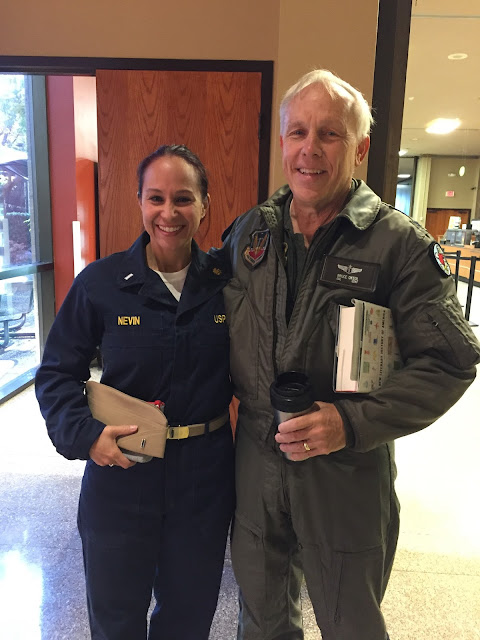 The flight jacket: when one separates from the Air Force certain "issued" items are to be returned. After I qualified for flight status, I reported to "wherever it was" on Grand Forks AFB to be issued  my flight gear. The jacket I was issued was "used," previously worn by a Major Baird according to the indelible ink entry on the inside of the jacket. That was in 1982, and my inaugural flight with this jacket was an all-night, eight-hour, low-level training run through the Rocky Mountains in a B-52. I wore that jacket almost daily for the next 25 years. It is still in the very same condition as it was when it was issued to me (with the exception of a few loose threads). The cloth, elastic cuffs are not a bit worn. For whatever reason, the Air Force never asked for any of my issued items back when I retired in 2007. I was issued 6 sets of flight suits, or thereabouts, and still have all of them. To the best of my knowledge, those were the only flight suits I was ever issued. Despite 25 years of wearing them, they still look brand new.

I learned in the Air Force to never go anywhere without a book to read. Often electronic gizmos (like iPhones) were not allowed but books were never an issue. The military is well known for it's "hurry up and wait" culture. Books make the waiting a lot less irritating.

By the way, when a line seemed to move very, very slowly, if I pulled out a book, all of a sudden the line began to move very quickly. My assumption is that the commanding officer did not like folks enjoying their "time off" by reading a book. "Standing in line" in the Air Force was never all that irritating for me; I found it was one place I could relax.

I read a lot of books while in the Air Force.

Montana has scored a $200 million dollar deal to sell its beef on the Chinese market, one that will come with an up-to-$100 million investment in a processing plant In its state.

The deal between JD.com, one of China’s largest retailers, and the Montana Stockgrowers Association was announced Wednesday — even as the Donald Trump administration is in Beijing negotiating a separate deal it said is worth as much as $9 billion.

Under the memorandum of understanding, JD.com has agreed to purchase a minimum of $200 million of Montana-sourced beef over a three-year period from Montana Stockgrowers Association members. The retailer will also invest up to $100 million in a processing plant in Montana to support the beef production.


In the past year, there have been major changes in the frac sand sector. Exploration and production companies in the Permian and other growing areas have significantly ramped up the volume of sand they use in well completions, catching high-quality sand suppliers in the Upper Midwest off-guard and spurring sharply higher frac sand prices due to the tight supply.

At the same time, development of regional sand resources has taken off in the Permian — with close to 20 mines announced with upwards of 60 million tons/year of nameplate capacity possible — and, to a lesser extent, in the SCOOP/STACK, Haynesville and the Eagle Ford.

That new capacity should begin easing sand-supply shortfalls next year, reducing sand delivered costs and potentially threatening the dominance of traditional Northern White sand. And more changes are ahead in 2018.

Frac sand is critically important, not only in Shale Era hydrocarbon production, but in production economics. Production in shale plays is founded on a combination of horizontal drilling and the use of proppant (primarily natural sand, but also a bit of ceramics and resin-coated sand) that, when forced out of the horizontal portion of wells at high pressure (using water and other fluids), fractures openings in the surrounding shale. When the pressure is released, the fractures attempt to close but the proppant contained in the fluids keeps them open, making a ready path for oil, gas and NGLs to flow into the well bore.