Calm before the storm.

Darkest before the dawn.

Best is yet to come. 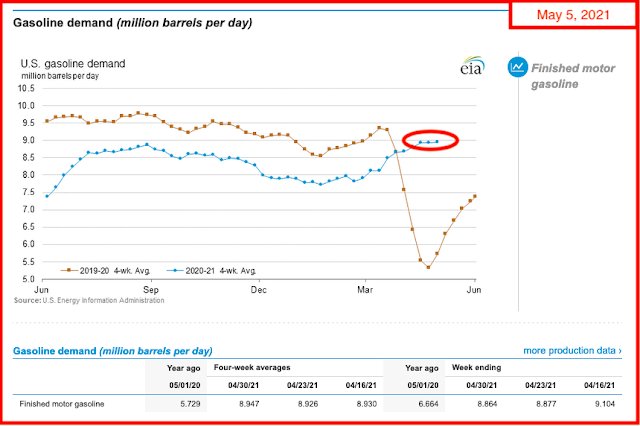 Largest draw since January, 2021. Link here. Data suggests gasoline prices may hold steady for a week or so.

Tea leaves: electricity and gasoline are going to get very, very expensive in California this summer. In fact, energy expenses in California may be the big story this summer for the state. By the way, my hunch: the California recall will never happen. The Democrat legislative body holds the purse.

This song is five minutes too short:

Posted by Bruce Oksol at 6:33 PM No comments:

Too much too fast?

Sempra Energy expects to delay a final investment decision on its proposed Port Arthur liquefied natural gas export facility in Texas until next year, as it continues to face commercial challenges a year after the pandemic began, CFO Trevor Mihalik says.

The continued impact of the pandemic on global energy markets as well as improving the project's greenhouse gas emissions profile means it is more likely that the FID for Port Arthur LNG "will move to next year," Mihalik said during today's earnings conference call.

"I don't see any scenario that we would probably take FID without having it fully contracted," Martin said on the call.

The only firm supply deal tied to Port Arthur LNG announced so far is a 2M mt/year sales and purchase agreement signed in 2018 by Poland's PGNiG.

Still not finalized is a preliminary agreement signed in 2019 for Saudi Aramco to take a 25% stake in Port Arthur LNG and lift 5M mt/year of supply from the facility.

One New Permit; Number Of Active Rigs At Seventeen; Eight Permits Renewed; and, Three DUCs Reported As Completed -- May 5, 2021

See sixth column. The country has a capacity of 4 million + doses per 24-hour period; most recently, less than 2 million were administered..

By the way, look at how the amount of vaccine being delivered is dropping; it came very, very close to dropping below 3 million doses when recently as many as 6 million doses were delivered.

There was a story earlier today that some states are not using their full allocation; the federal government will re-allocate unused vaccine to states that "need" it. Posted earlier.

This past week, the vaccine was opened up to everyone over the age of 16.

Posted by Bruce Oksol at 4:04 PM No comments:

I may quit blogging for the day; more than enough news to digest. LOL. No, I'm just beginning.

With oil markets balancing, CLR is shifting back to its oil-heavy assets in the Bakken -- The Williston Herald.

During the pandemic, Continental went with a gas-weighted profile, but now, with supply-demand curves balancing, it’s planning to flip that ratio around.

That will mean ramping up well completions in the more oil-heavy Bakken instead of the Scoop-Stack play in Oklahoma. In the second half of the year, 70 percent of its well completions will be in the Bakken, versus the 50 percent ratio the company had at the beginning of this year.

That’s going to mean at least one more rig in the Bakken to add to the four that are already running, and the completion of about 65 wells. The company will start drilling out Long Creek in August, which has so far shown very strong initial production stats. The company plans about 56 wells there.

Continental is also paying off its debts faster than expected, thanks in part to stronger than anticipated oil prices. WTI was trading around $65 on Wednesday — versus $15 a barrel last year amid a demand-crushing pandemic and a Russia-OPEC price war that oversupplied an already oversupplied market.

By the way, there is something very interesting about CLR's Long Creek Unit which no one has mentioned yet. I won't mention it either because I don't need the push back. I'll wait for CLR to do the announcement for me.

On the day, New York states shuts down the Indian Point nuclear plant, the Biden administration floats the idea of subsidies for nuclear plants. LOL.

The Biden administration is talking to the Democrat base: unions, which would build the nuclear plants.

But it will take ten years for the first spade of dirt to turn for a greenfield project even if there was a "shovel-ready" project on the books today. Anyone who thinks the natural gas industry feels threatened by nuclear energy is an idiot.

Environmentalists who won't accept transmission lines through Vermont and won't accept buried pipelines to carry natural gas from Pennsylvania to New Jersey certainly aren't going to fall for that nuclear energy talk. LOL. Where would all that radioactive waste be buried? At sea? Which Japan favors.

It's a long thread but well worth it.

This may not show up on that particular thread: the CEO says the breakeven for PXD is $15 / bbl. It was noted that PXD managed to lose money in 1Q21 when oil was selling for $57.

But, then, of course, a lot of merger and acquisition activity to get through.

Talk about "cognitive dissonance" for a kingdom that continues to live in the Middle Ages. Reuters contributor writes:

In order to wean Saudi Arabia off its dependency on crude the kingdom needs higher oil prices.

I fought against the bottle, but I had to do it drunk. LOL.

Getting ready for the Sturgis rally.

I haven't listened to this song in a long time. I don't know whether it's SFW. View with caution.

Some days Lana Del Rey comes across as the James Dean of her generation. 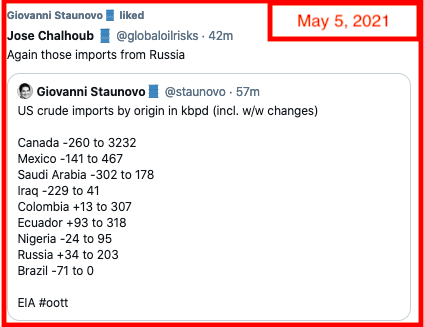 Pittsburgh-based United States Steel Corp. said Friday that it is canceling a $1.5 billion project to bring a state-of-the-art improvement to its Mon Valley Works operations in western Pennsylvania, saying the world has changed in the two years since it announced its intentions.

Project permits initially stalled by the pandemic never came through, U.S. Steel has added capacity elsewhere, and now it must shift its focus to its goal of eliminating greenhouse gas emissions from its facilities by 2050, it said.

The loss of what would have been one of the largest industrial investments in Pennsylvania quickly led to recriminations by Pittsburgh-area politicians, labor unions and business organizations over why the project could never secure permits. Some worried it will diminish the future of steelmaking there.

“We had a window of opportunity and it’s absurd that we as a region have allowed that window to be slammed shut,” said Jeff Nobers, executive director of Pittsburgh Works, a coalition of labor unions, corporations and local business chambers.

Pennsylvanians will be happy to know they are helping save the world from CO2 emissions.

Memo to self: check in on coal plants in China.

Crude stocks at the Cushing, OK, storage hub, meanwhile, edged up by 548,000 barrels for the week.

Inventory data from the Energy Information Administration will be released today (May 5,2021).

On average, the EIA is expected to show crude inventories down by 3.9 million barrels, according to a survey of analysts conducted by S&P Global Platts. It also forecast supply declines of 500,000 barrels for gasoline and 1.6 million barrels for distillates.

ooooof .... disappointing gasoline product supplied numbers; huge imports at 1.02 mbpd. Spreads, cracks falling apart on this report. By the way, crude exports way up at 4.12 million bpd; had been averaging about 2.5 million bpd.

Crude oil imports. I don't know if it means anything, but as a percentage basis, year-over-year, it appears that the US has been importing a larger amount of crude oil over the past few weeks compared to earlier this year. From week 41 to week 46, the last column, the four-week period, year-over-year, was generally negative, and often double digits. Recently, from week 57 on, the percentage has increased, including a double-digit jump last week.