Two new permits:
And that was all.
Posted by Bruce Oksol at 5:30 PM No comments:

I haven't watched television at all in the last couple of days (I'm traveling) so I don't know what the "talking heads" are saying to explain the price of oil today, but it appears oil dropped about 3.6%, and closed well below $51.

Geopolitically, the world must have quieted down significantly.

One would have thought with these three articles on China and oil, the price of oil would have actually gone up a bit:
But it is what it is. But oil is certainly trending in a direction that is not good news for Asui Arabila or Saudi Aramco.

Update: after posting the above articles sent from a reader (thank you), the reader sent another article, this one about India. India's fuel demand rises to record on gasoline, diesel growth.

I see Bill O'Reilly is out, apparently replaced by Tucker Carlson. My hunch is that Tucker will do even better with the ratings. Mainstream media should see the photos that the tabloids have on former President Clinton. The former story will be a huge story on ABC News tonight; the Clinton story won't be mentioned despite the photos. It is amazing with whom former President Clinton is seen.
Posted by Bruce Oksol at 3:59 PM No comments:

Yahoo E-Mail Has Had Major Disruption Since Early This Morning -- April 19, 2017

"Is Yahoo Mail Down?" suggests the problem continues, although it might be clearing up based on number of reports. But the map suggests things have gotten much, much worse since reports first began coming in.

Africa appears not to be experiencing any problems. Nor North Korea.


Re-Balancing: US crude oil inventories down one million bbls. At this rate, only 150 more days to get us to "normal" -- 250 million bbls in US storage. The link will take you to a pdf.

In other words, no real change, and still remarkable how much oil the US still imports.

Saudi Arabia says it "needs" $60-oil (average) for the entire year, 2017. This is where we stand to get to that $60-average. The first three months are completed; April - December are estimates of numbers that would be needed to get us to $60 oil. We have to have steady trend to $70 by end of year, and have to hit $70 by November. The numbers are simply my ballpark estimates of the average price of WTI in any given month. Brent is currently trending a bit higher than WTI. Saudi has its own pricing.

Vern Whitten sent link to his 1997 photos of the massive Red River flood. Link here. In the notes that accompanied his e-mail:

Photo notes:  20 years ago we used a medium format film camera to take these
photos. It was 10 shots then reload in the airplane. We then made contact sheets
in the darkroom, and scanned each negative before printing.  Now, we have a digital
camera that can over 400 high resolution photos before putting in a new chip.
Be sure to send Mr Whitten a big "thank you" for posting his photos/his links. He would love to hear from you.

It's impossible for me to "fathom" this degree of flooding. All the photos are amazing, but the first two literally take one's breath away. And it's not like this water receded in a day or two; this went on for weeks.
Posted by Bruce Oksol at 9:40 AM No comments:


The Florida natural gas market will soon have access to another supply source. In June 2017, the Sabal Trail Transmission natural gas pipeline project is expected to begin service, bringing the market one step closer to connecting Marcellus/Utica natural gas to demand markets on the increasingly gas-thirsty Florida peninsula.

The project will increase gas supply options for growing power generation demand in the Sunshine State while effectively also increasing gas-on-gas competition between producers in the Northeast, Gulf Coast and Midcontinent. Today we provide an update on Sabal Trail and its related projects.

The Florida peninsula has long been isolated from natural gas supply areas, with minimal in-state production, no gas storage capacity to speak of and just two pipeline options for shipping gas into the state from other supply regions. All that may have been acceptable—or at least manageable—at one point in time, but the state in recent years has added significant amounts of gas-fired power generation capacity.

Florida—already one of the biggest consumers of natural gas to generate electricity, second only to Texas—is hugely dependent on natural gas and becoming more so.

To meet growing demand for electricity in Florida, NextEra Energy’s Florida Power and Light Company (FPL), the state’s largest electric utility and the largest consumer of natural gas, has undertaken a significant revamp of its generation fleet to replace legacy plants that burn coal and less-efficient natural gas peaker units.

FPL completed its first major plant upgrade at Cape Canaveral in April 2013 – a 1,277-MW combined cycle gas turbine unit consuming about 175 MMcf/d of natural gas. Additional gas-fired generation plant capacity has been added since then.  This includes the addition of the 1,250-MW Riviera Beach plant in spring 2014 and the 1,277-MW Port Everglades plant in Fort Lauderdale in April 2016; a 460-MW expansion of Tampa Electric’s Polk County Power Station in January 2017; and a planned new 1,640-MW Duke Energy combined-cycle power plant in Citrus County, FL, due online in 2018.  And in January 2016, FPL received regulatory approval from the Florida Public Service Commission for the Okeechobee Clean Energy Center, a 1,600-MW combined-cycle gas-fired power plant in Okeechobee County scheduled to open in 2019.


We just finished up the hottest July on record. Very high temperatures cause air conditioning demand to go ballistic. System operators struggle to generate enough power to satisfy peak load and call on expensive “peaker” generation units that set a high market price for power. With gas prices trading lower these days, the spread between high power prices and the cost of the gas fuel to generate that electricity (the spark spread) widens considerably during a heat wave. Today we look at spark spreads during July in New York City.

Clearly, the definition of insanity. These states have been re-electing the same folks since WWII.
On Tuesday, the American Legislative Exchange Council (ALEC) released the 10th edition of its Rich States, Poor States study, and it shows that red states have better economies than blue states in 2017.

Some of the worst-performing states, though, are run by Democrats.

Democrats control either the legislature, the governor’s office, or both in each of the bottom ten states in ALEC’s study.

Those states are, from #41 to #50:
Also of note: all ten states went for Hillary Clinton in 2016 (with the exception of Maine’s second congressional district).

Regardless of who runs what, it is just amazing that

The pdf is at this link. A screenshot of the 50 states and their ranking: 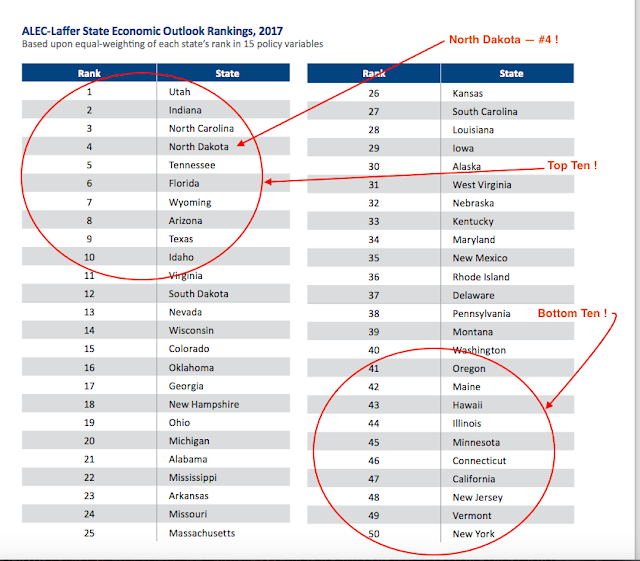 I've pretty much quit blocking on global warming (discussed earlier) but every so ofent a reader sends me an article that just ha to be posted for the archives. This is one of them. From Bloomberg, "Tahoe go so much snow this winter, they will be skiing all summer. An historic winter set up an unprecedented summer at Squaw Valley. Snowfall surpassed 700 inches this past week.  how much is 700 inches? Two hundred fifty (250) inches above average. The record snowfall is being blamed on climate change.
Posted by Bruce Oksol at 8:07 AM No comments:

Re-balancing: Saudi oil exports drop to 2015 low; sticks to cuts -- Bloomberg. I'll wait to see the EIA data. Data points in this article:
Re-Balancing: US crude oil inventories down one million bbls. At this rate, only 150 more days to get us to "normal" -- 250 million bbls in US storage. The link will take you to a pdf.

Morgan Stanley: quarter profit surges on trading gains. With regard to trading gains/losses, it appears Goldman Sachs was the "odd man out" this past quarter.