No love lost.
Linkage. A reader asked if there might be linkage between those two stories (US SecCommerce abruptly cancels visit to Germany and Saudi announces it won't attend the G-20 summit). Well, here's the linkage, Donald Trump spoke to the king yesterday, just before the announcements. His early morning tweet:


"Spoke yesterday with the King of Saudi Arabia about peace in the Middle-East. Interesting things are happening! Then I called Wilbur."

Just joking. That part about Wilbur was not in the tweet. Exceeded the 140-character limit.

Linkage. In two follow-on tweets, President Trump says he will be talking to France, Germany, and Italy this morning.


Crude oil prices have plummeted 20 percent since February, the most dramatic first-half slump since 1997, and inventory remains about 340 million barrels above the five year average.

In short, the agreement between OPEC and its non-OPEC allies to slash their production by 1.8 million barrels per day has failed to rebalance the oil market and boost the commodity’s price.

Oil inventories increased at a rate of 1 million barrels per day during the first quarter, according to Morgan Stanley estimates. And while seasonal demand on the horizon should chip away at the excess for the rest of the year, that’s temporary.

Break-even costs: for the archives -- 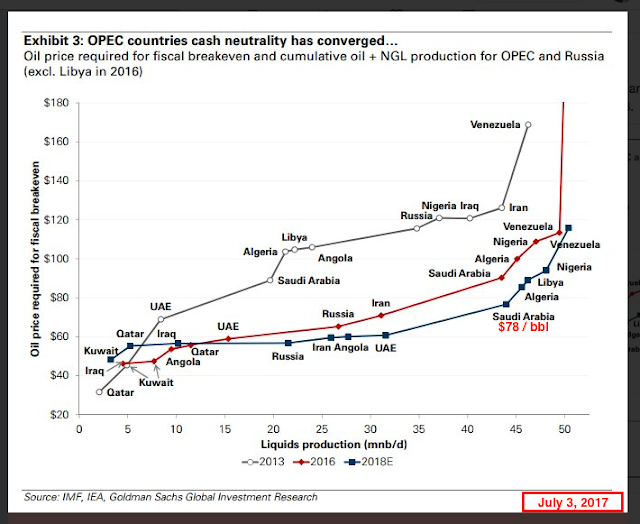 US energy mix: for the archives -- 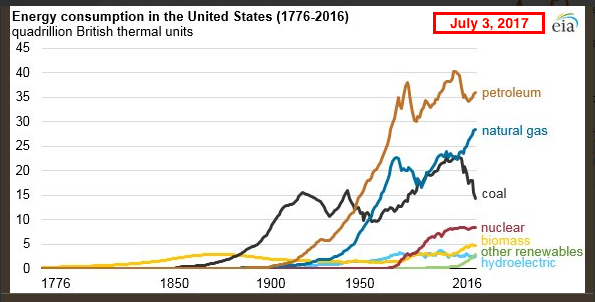 
RBN Energy: more LPG to be railed to the Pacific Northwest and shipped to Asia.


Plans are afoot to double and maybe triple the liquefied petroleum gas (LPG) export capacity of the Pacific Northwest — British Columbia, Washington State and Oregon — giving the region an enhanced role in what has been a booming business. Volumes being shipped to Asia out of the Ferndale marine terminal in northwestern Washington State are at near-record levels, and AltaGas and Royal Vopak are building a 40-Mb/d (and expandable) export facility in northwestern BC that is planned to come online in early 2019. Further, Pembina may be only months away from committing to the construction of a 20-Mb/d LPG marine terminal, also in BC. Today we continue our series on the expanding role of Western Canada in LPG exports with a look at plans for new propane/butane marine-dock capacity in BC.