Time to get out the camera.

This is the first of several videos that I will be posting this week from the Bakken. This is approaching from the south and then heading down Indian Hill south of Williston, on the south side of the river.

By the way, they've begun work on the new four-lane bridge across the Missouri River a big further up the road.

If I recall correctly, this was a two-lane highway prior to the boom. During the boom, they widened the highway at many points along the way between Williston and Alexander to three lanes, with two lanes going north at some points and two lanes going south at some points. That plan was met with a fair amount of criticism suggesting that it would have been better to build a four-lane divided highway; it appears that is what is being built now.

It should also be noted that as the number of active rigs decrease in the Bakken, infrastructure continues to be put in, calling for a different skill set than trucking.
Posted by Bruce Oksol at 12:04 PM 2 comments:

Something new in South Dakota -- it caught me by surprise: 80 mph speed limit on I-90 west of Rapid City, past Sturgis. It certainly surprised me.


I stopped at Sturgis for coffee; someone left a Rapid City Journal on the table. The headline story: "I-90 Speed Limit Here Could Fall To 75 MPH." This is the back story:
"The move to lower the limit comes less than a month after the state Legislature enacted an 80-mph limit on South Dakota's two interstates. The effort was led by Rep. Grian Gosch of Rapid City, who quietly inserted the 80-mph limit into a road funding bill essentially without public or expert input."

The computer says it's 10:37 here and they are still serving breakfast at McDonald's so maybe it's 9:37 local time (Mountain). We'll see. I'll be here for about 30 minutes and then head north through Newell, where my paternal grandparents homesteaded.

Then on to North Dakota.


“The top 100 oil fields in the United States accounted for 20.6 billion barrels of crude oil and lease condensate proved reserves, or 56% of the U.S. total in 2013. The top 100 natural gas fields accounted for 239.7 trillion cubic feet of natural gas proved reserves, 68% of the U.S. total. Proved reserves are defined as estimated quantities of oil and natural gas that analysis of geologic and engineering data demonstrates with reasonable certainty are recoverable under existing economic and operating conditions. --- EIA

Producers of machinery, including oil-drilling equipment and turbines, saw a 1.5 percent slump in demand.

Why is this a surprise? The US oil and gas industry is in collapse and the US president is the most anti-growth, anti-business president in modern history.

The good news: fast food workers will see a huge increase in their pay. 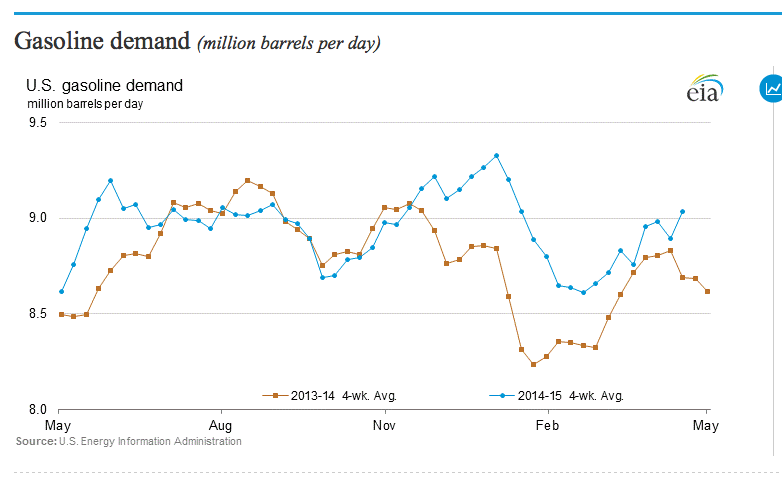 Preparing to move from apartment to house at end of month.

Daughter and older granddaughter on way to Austin, Texas, to showcase school project that took first place in Texas, and now moves to Iowa for national competition.

Olivia's "recreational" (non-professional) soccer team traveled halfway to Abilene, it seemed, yesterday when they drove to west Ft Worth. They won 3 - 1. Our middle granddaughter, age 8, scored two goals.
Posted by Bruce Oksol at 11:59 AM No comments:

Richard Zeits over at Seeking Alpha on cost control:


The reporting season for U.S. E&P operators is about to shift into high gear next week. One of the most prominent themes this quarter will be record reductions in well costs achieved since the beginning of this year that management teams will showcase as the sector's key response to the change in the macro environment.

I expect that the average cost reduction already achieved and reflected in the leading-edge AFEs, for resource plays, will be in the 20%-25% range from the respective costs in 2014. Moreover, I expect operators to guide for additional well cost reductions of 5%-10% for the remainder of the year.

While the decline in well costs is the U.S. resource plays is of course nothing new, this earnings season will likely surprise with the magnitude of the reductions and the speed with which these reductions have been achieved. For many operators, well cost reductions will likely materially exceed guidance provided earlier this year.


Triangle Petroleum reported last week that it reduced its average gross well costs to $10.2 million on average in its fiscal Q1 2015 (three months ended January 31, 2015). This represented a ~14% year-on-year reduction. Triangle also reported that its most recent AFEs were coming in under $8 million and already exceeding the top end of the company's 10%-20% well cost reduction target for the current fiscal year.

It should be noted that Triangle's well cost remains on the high end among its peer group, but may be in part explained by Triangle's "integrated" business model whereby Triangle's wells are completed by RockPile, a sister company specializing in pressure pumping and completion logistics which is 100% owned by Triangle.

The article will be archived at the source.
Posted by Bruce Oksol at 6:53 AM No comments:


The international market for liquefied natural gas (LNG) is an inherently risky business where returns depend on paying back huge upfront infrastructure investments with cash flows based on volatile energy prices. Tectonic shifts in the market are giving North American LNG exporters and natural gas producers an opportunity to become pivotal players. The world is on the cusp of an LNG supply glut that may last several years, and the old order of long-term supply contracts with prices indexed to oil is being phased out in favor of a market structure that features more destination flexibility, more spot market sales—and, for U.S. and maybe some Canadian and Mexican LNG exporters—more liquefaction “tolling” deals with LNG prices linked to gas. Today, we continue our look at what these changes mean for the North American energy sector.

Only a few years ago, the U.S. was planning to import large volumes of LNG to offset declining domestic gas production, China and India were starting up a new coal-fired power plant or two every week, Japan was getting nearly one-third of its electricity from nuclear power, and Qatar was the king of LNG exporters. Qatar remains on its throne, with about 32% of the market, but the traditional business model that put it on top is shaking and shattering.

When LNG exporting and importing began in earnest in the late 1960s, LNG prices were fixed at first, but starting with the OPEC oil crisis in 1973-74 (when oil prices soared, putting LNG at a steep discount) oil and LNG prices were linked, with the goal of mitigating the risks faced by LNG buyers and sellers—and the developers of capital-intensive LNG export facilities.

Bird flu emergency. This is getting to be quite a big story.


Minnesota declared a state of emergency on Thursday over a fast-spreading strain of avian flu that has led to the extermination of more than 7.3 million birds in the country. It followed Wisconsin's action on Monday.

The highly pathogenic H5N2 strain of bird flu has been identified on 46 Minnesota farms in 16 counties and affected more than 2.6 million birds in the state.

The virus can kill nearly an entire infected flock within 48 hours. Millions of turkeys and chickens are in quarantine waiting to be culled and large flocks have already been destroyed.

Officials have said they believe wild birds are spreading the virus but they do not know how it is entering barns.

Two bird flu strains have been discovered in the United States this year. The H5N2 strain is in Arkansas, Idaho, Iowa, Kansas, Minnesota, Missouri, Montana, North Dakota, Oregon, South Dakota, Washington and Wisconsin. It has also been identified on farms in Ontario, Canada.

By the way, the virus is spread by wild birds, thus suggesting that "free-range" birds at high risk.
Posted by Bruce Oksol at 6:42 AM No comments: