The well:
I'm too tired to go into this but this well and surrounding wells are off due to fracking in the area.
Posted by Bruce Oksol at 9:10 PM No comments:

The well (full production profile at this post):
Production period of interest:

On Top Of Everything Else, US Federal Gulf Of Mexico Crude Oil Production Continues To Set New Reocrds -- And Will Continue To Do So -- October 16, 2019

Lots of stuff to talk about.

That huge crude oil  build today? Some say it's simply a mismatch in timing of production reports and export reports. If that's true, this "build" will take care of itself. Like all such reports, it's a snapshot in time; the trend is the metric to watch. Even so, this report has to be concerning for Saudi Arabia.

Meanwhile, take a look at EIA's "Today in Energy, " October 16, 2019. Everyone will interpret the report through their own filters.

My filters:
Two screen shots to get started 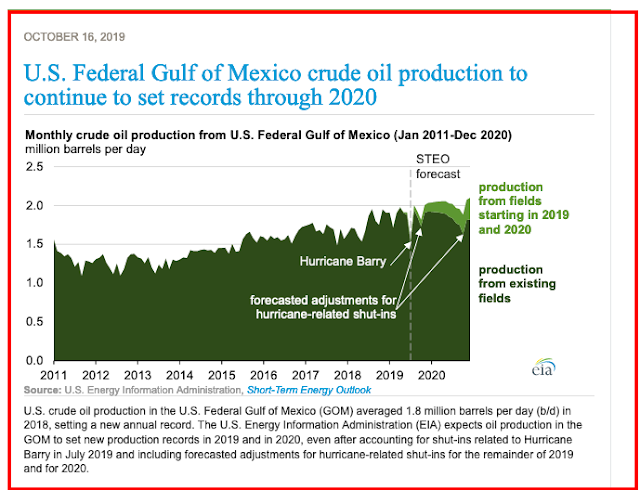 Takeaways for calendar year 2018 in the Gulf of Mexico:
Peak oil?

Remember all that hand-wringing five years ago that "we" weren't spending enough CAPEX on offshore oil E& P? And we move on. 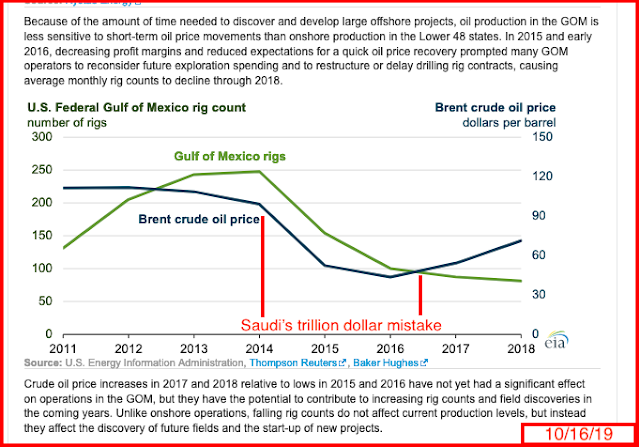 Lots of verbiage: I will let readers read that for themselves.

First question: why was production data not "overlaid" in the graphic above? It would have been quite dramatic, placed on the same graphic as the rig count.

First observation: the EIA cleverly failed to mention that the sudden fall in the price of Brent in 2014 was due to the Saudi's flooding the market with oil trying to crush US oil sector (mostly shale). I've pointed that out on the graphic. Once OPEC cut back on production, the price of Brent returned to a "more normal" level.

Remember:
Even in the Gulf, do rig counts matter? And, again, don't take that out of context.

Switching gears: decision times and drilling. In the EIA report above, it is noted that "a fair amount of time is needed to discover and develop large offshore projects ..."
Okay, enough of this.

The new EIA dashboards have posted: Monthly additions from one average rig: 1,500 bopd. 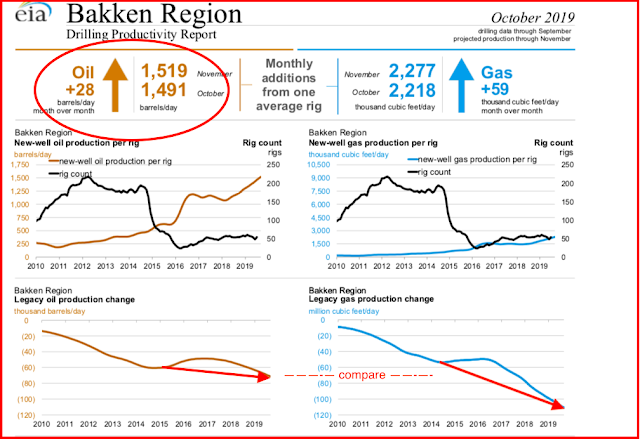 Quick: what is the corresponding number for the Permian? A paltry 794 bopd.

I had a minor wi-fi problem today. I called Spectrum and they responded.

Making money on $50 oil: as previously announced, COP has increased its quarterly dividend by a whopping 38% -- 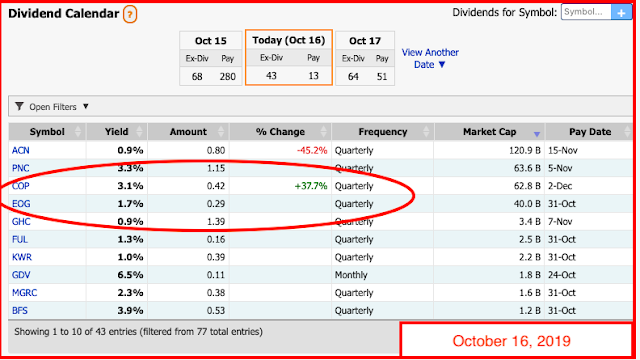 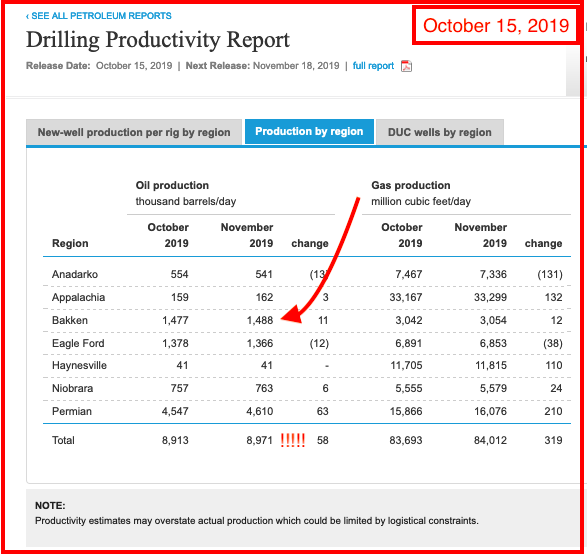 Wind energy giving back to the community? I've yet to see this from a wind farm, but here's yet another fossil fuel investment in the local community, from ONEOK: 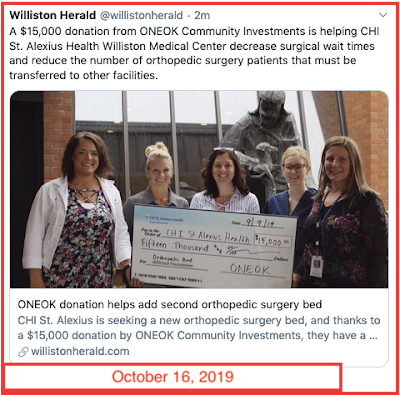 Boiler plate sundry form for these EOG wells throughout the Parshall oil field. This is from a sundry form dated May 10, 2019, but I've seen the same boiler plate language for at least the past three years, it seems:


EOG is currently executing a downspacing and infill drilling program. During this process, the new infill wells are being hydraulically fractured offset existing / producing wells. The existing wells in closest proximity to the new infill wells are shut-in during the drilling and completion process. Pressure pulses have been noted in the existing shut-in wells during this process.

Due to the pressure pulses, sand from the completions in the original wells can become dislodged and enter the wellbore. When this occurs wellbore intervention is required to replace the damaged pumping equipment and may also require the wellbore to be cleaned out; both operations are costly and slow the process of returning offset wells to production.

In addition, the low energy system often requires artifical life (rod pump or ESP) which can be difficult to operate with sand production.

As a mitigation measure, EOG is requesting approval to fill the existing wellbore with water and to have the option to use a temporary diverter. The water would increase the bottom hole pressure in the existing well, counteracting the pressure pulses and sand influxes impacting the well from the drilling and completion process of hte infill wells.

Surface-hole pressure will be maintained below EOG's designated pre-fill pressure paramets noted in Figure 1 based on the set tubing depth of the referenced well. The referenced well is connected ao Supervisory control and Data Acquision (SCADA) system which is monitored 24/7. The automated pump kill pressure is set at 90% of total surface pressure. Water will be transported by truck or pipeline for the process.

I featured this well back on April 27, 2017, as a "well of interest" to show newbies how all that talk about the dreaded Bakken decline rate is just that  -- a bunch of talk. Back in 2017, this well was featured to show how a Bakken well's decline can be reversed.

Well, what do you know. A year later this well had a huge jump in production that I completely missed.

I used to tag these wells with other phrases. I am now lumping all these examples into "advantaged oil."

The well:
Period of production of interest:

This "monster" well has just come back on line:

There are three other wells on this pad, and many, many more wells in the surrounding area.

It's almost impossible to find the neighboring well that was recently fracked because of so much activity in the area, but this would be a good candidate:

Again, another example of "how predictable" the Bakken. Over on the "monster well" page, this monster Whiting well was taken off line a few months ago. My hunch: a neighboring well is being fracked. And that was exactly the case.

The following wells all went off line back in April, 2019, and remain off line. Meanwhile, a newer well is reported to be a DUC by the NDIC. FracFocus, however, shows that the well has been fracked. The neighboring wells that are offline while the newer well is being fracked:
The monster well taken off line:
FracFocus:

This is how "amazing" the Bakken is for some "small" mom-and-pop mineral owners in the Bakken, who no doubt inherited minerals from their homesteading parents, some of whom bought land from neighboring farms over the years.

I have a reader who tells me, even ten years into the Bakken, upwards of seven siblings are each receiving royalty checks trending toward $50,000 / month.

Let's work this backwards. Assuming the family "kept" all their minerals over the years.


The Federal Reserve Bank of New York said Tuesday that longer-run inflation expectations hit the lowest level the bank has ever tracked in its latest monthly Survey of Consumer Expectations.

How did the Fed arrive at this number? Are you sitting down?


The drop in expected inflation three years from now “was driven by the respondents with household incomes less than $50,000 and those with a high-school diploma or less,” the New York Fed said.

Are you kidding? This was a headline story for The WSJ? This is how the NY Fed forecasts long-term interest rates? Okay -- I understand -- they are reporting expectations -- but still, this is a headline story.

Well, for the record, a lot of college-educated folks with incomes greater than $150,000 may have different expectations.

Garrett watch: it's now being reported that the Dallas coach is on the "hot seat" after three consecutive losses -- including the most recent loss against the weakest team in the league. 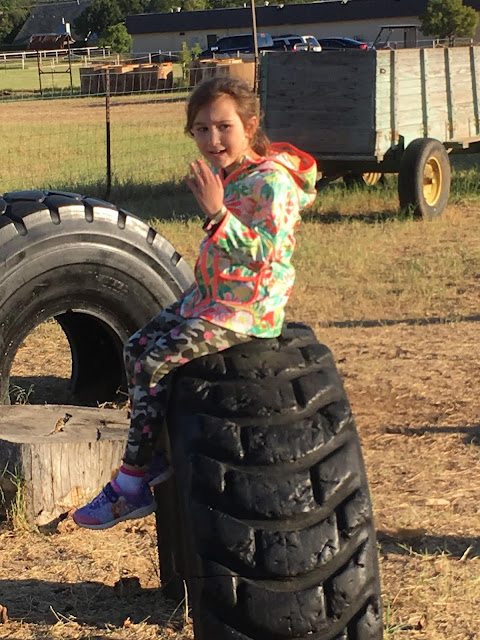 Sophia learned the difference between tires and wheels.
Posted by Bruce Oksol at 8:06 AM No comments:

Shocked: solar panels don't provide power to one's house during a utility blackout. Home solar panels are tied into the grid; they do not provide electricity to one's own home.


America's most "environmentally conscious" state got a harsh lesson in electrical engineering when many of the tens of thousands of people hit by this week's blackout learned the hard way that solar installations don't keep the lights on during a power outage.

That is "because most panels are designed to supply power to the grid, not directly to houses. During the heat of the day, solar systems generate more juice than a home can handle. However, they don’t produce power at all at night. So systems are tied into the grid, and the vast majority aren’t working this week as PG&E cut power to much of Northern California to prevent wildfires."


The Northeast natural gas market was supposed to have turned a new leaf. After years of pipeline takeaway constraints and constraint-driven prices, the region as of late 2018 had ample, even excess, takeaway capacity on its hands. Regional prices strengthened on both an absolute basis and relative to downstream markets, and Marcellus/Utica producers had room to grow. But bearish fundamentals have rattled the Northeast — and U.S. — market in recent months. In-region demand has lagged, even as production has set new highs. Since August, capacity reductions on Texas Eastern Transmission, a key Northeast takeaway route, have limited outflows. And, to top it off, Dominion’s Cove Point LNG went offline last month for an annual three-week-long maintenance, taking another 700 MMcf/d of demand out of the market for a time — it has since come back online, as of this past Monday. But regional prices in late September and early October were pummeled in the process, raising the question: are the Northeast’s takeaway constraints back? Today, we analyze the impacts of shoulder-season dynamics on regional storage and takeaway capacity utilization.

As weak as gas prices have been lately at the national benchmark Henry Hub, Northeast prices have been even weaker. Prices at the Dominion South hub, the benchmark for Appalachian supply, were trading 20 to 40 cents per MMBtu below Henry for most of the first seven months of 2019. But in August, that discount — or basis — plunged to minus 80 cents, and averaged about $1 in the first couple weeks of October. That’s stronger than where basis stood during the worst of the pipeline constraints in prior years, but still weaker than last year at this time, even as the Henry cash price is trading at multi-year lows.