This is pretty exciting. We are expecting Apple Inc to launch a new low-cost iPhone sometime this year.

A new case designed for the new low-cost iPhone has been spotted in the wild. In Best Buy to be exact.

Best Buy employees, apparently, have been told not to merchandise these cases until Sunday, April 5.


We don't know what Apple is going to call its new phone, but in rumors, it's been referred to as the "iPhone 9," a missing ‌iPhone‌ number, or the "iPhone SE 2" due to its rumored $399 price tag.

The new ‌‌iPhone‌‌ is said to be identical to the iPhone 8 but with an A13 chip inside, featuring a 4.7-inch display, a single-lens rear camera, thick top and bottom bezels, and a Touch ID Home button. It is expected to come in space gray, silver, and red color options, and we're expecting 64 and 128GB storage capacities.

The well, see this post for additional information:
Note: this well is still flowing without a pump. At least according to the NDIC file report. 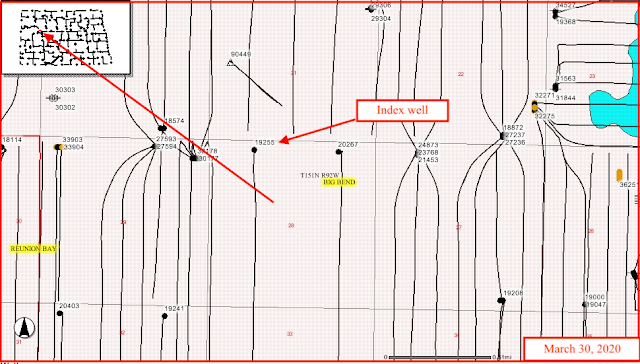 Maybe this would be a good time to start talking about the meme: " ... running out of good locations to drill in the Bakken."
Posted by Bruce Oksol at 8:23 PM No comments:

Contango: the note in the screenshot below is not news. RBN Energy talked about contango back on March 19, 2020.

The graphics for Whiting's new perit in Bully oil field: 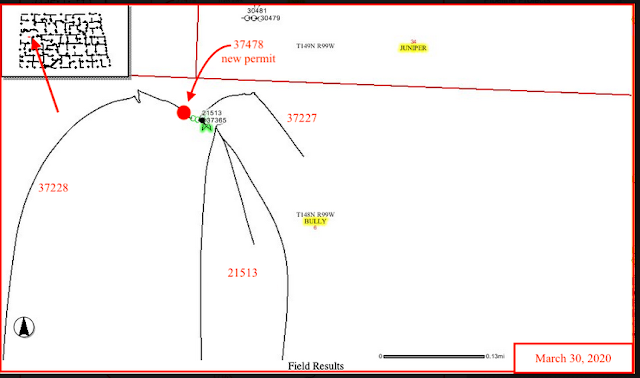 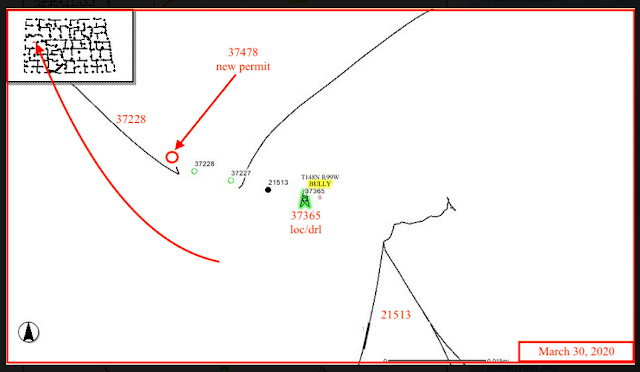 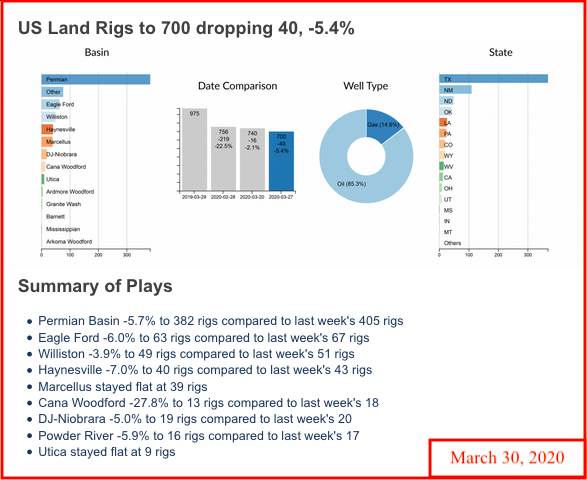 From Focus on Fracking, link here:


Continental Resources and Whiting Petroleum Corporation are among the latest operators with Bakken assets announcing sharp drops to capital expenditures in the wake of an ongoing price war between Russia and OPEC.

Continental said it will reduce its 2020 capital expenditures by 55 percent, dropping its 2020 capex to $1.2 billion.

For Continental, this translates to a reduction of six rigs in the Bakken, dropping it from nine to three for 2020. Continental will also cut rigs in Oklahoma, going from 10.5 to about four rigs there.

Whiting, which had already made some cuts last year, said it will drop another rig and another completion crew within the next month.

Continental expects the revision to its capex to have slight impact on production statistics. It is projecting the drop in crude oil production will be less than 5 percent.

Whiting said its cuts will have “moderate impact” on 2020 crude oil production, but deferred specifics to more formal guidance that it will release during its first quarter earnings call.

Continental’s Chief Executive Officer Bill Berry said the company is also looking at cost-saving initiatives across its operations to remain free cash flow positive, and expects to remain cash flow neutral even under $30 per barrel WTI.

Norway's Equinor is halting activity at its US shale assets as part of measures to slash spending in response to the oil price collapse, the company said Wednesday, March 25, 2020.

All drilling and well completion activities at Equinor's gas-focused US shale assets are being suspended to cut spending and "produce the volumes at a later period", the company said.

The majority of Equinor's US shale production comes from the eastern Marcellus gas play which is targeted at consumers in New York State.

The move, which followed an announcement to suspend share buybacks, is part of a wider 20% cut in organic capex for 2020 to around $8.5 billion from $10 billion-$11 billion , Equinor said. The company also said it will reduce planned exploration spending this year to $1 billion from around $1.4 billion and cut operating costs by around $700 million compared with original guidance.

This is simply impossible to fathom. From Edmund de Waal's The Hare With The Amber Eyes, c. 2010:


"[In 1914] Victor (the author's great-grandfather) had become a subject of his Majesty Franz Josef, the eighty-four-year-old Emperor of Austria, King of Hungary and Bohemia, King of Lombardy-Venetia, of Dalmatia, Croatia, Slavonia, Galicia, Lodomeria and Illyria, Grand Duke of Tuscany, King of Jerusalem, and Duke of Auschwitz.

One can see traces of the Holy Roman Empire in this list of holdings.

I did not recognize Lodomeria and was wrong about Illyria.

I watched "Citizen Kane" from beginning to end for the first time ever last night, on TCM. Superb. For its time. Fascinating and engaging.

Most disappointing: I did not feel any emotional attachment to any of the characters, save perhaps Joseph Cotten's Jedediah. I was particularly unimpressed  with Dorothy Comingore, but I am in the minority. From IMDB:


Dorothy Comingore earned a place in motion picture history for her role as the second Mrs. Kane (the Marion Davies to Orson Welles's William Randolph Hearst) in Citizen Kane (1941). It was an extraordinary performance, justifiably praised by critics and public alike. She was apparently slated to be on the short list for an Academy Award. However, there was to be no stardom in films for this talented actress.

I may have to re-watch the movie just to watch her more closely. But I can't imagine re-watching the movie any time soon. One wonders if the movie's biggest problem is this: the trailers / marketing stills are unable to "captur"e the movie.

On another note, it is truly amazing that Ted Turner acquired this movie as part of the library he bought when establishing TCM. What an incredible bit of luck.

On the other hand, earlier in the day I watched The Heart Is A Lonely Hunter was superb, and I could easily imagine watching this movie several times a year. It won't quite make my top ten movie list but would probably be among the top twenty.
Posted by Bruce Oksol at 2:00 PM 7 comments:

A Closer Look At An EOG Well Coming Off Confidential List This Week -- March 30, 2020

FracFocus:
From the file report:

Reminder: wells coming off the confidential list during Bakken 4.0 and don't report an IP are tracked here.