I assume #25653 will run south into section 16-154-99. What else is going on with the two wells in the immediate area?
Current screen shot with where I think the new Petro-Hunt well will run: 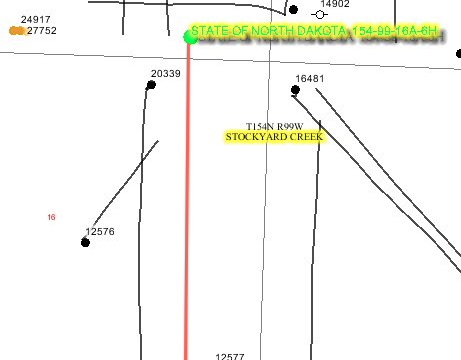 What some of us will be talking about Monday.

Baghdad. The last time "we" reported on Baghdad we were told that the citizens were unafraid; they had been through so much, so many wars, they were used to all this. There are two groups defending Baghdad from ISIS: a) the Iraqi Army; and, b) local militias. The residents say it is a given that the Iraqi Army will turn and run; and it will be the local militias that will hold off ISIL. In yesterday's WSJ  we learn that ISIL is getting ever closer to Baghdad, now within 12 miles of the capital, and, yes, the Iraqi Army has not distinguished itself.

Digital music sales at Apple iTunes store have fallen as much as 14% world-wide since the beginning of the year.

Invertebrates—creatures without spines—make up 98% of known animal species, but their backboned cousins get all the attention. Photographer Susan Middleton explores the strange world of underwater invertebrates in her new book “Spineless” (Abrams, $50).

One looks like a cross between a shrimp and a lobster; another resembles Jabba the Hut from “Star Wars.” To capture the often tiny subjects, Ms. Middleton set sail with marine biologists on research trips and photographed the creatures in modified aquariums that she brought on each ship.

She even photographed a few species that hadn’t previously been known to scientists. She wrote the book to showcase less conspicuous animals. A photographer for 35 years, Ms. Middleton has shot everything from lions to leaves but says, “I really am inspired by subjects that are not often seen.”

And something none of us well be talking about Monday: despite California climate law, carbon emissions may be a shell game. From The Los Angeles Times:


California's pioneering climate-change law has a long reach, but that doesn't mean all its mandates will help stave off global warming.

To meet the requirement that it cut carbon emissions, for example, Southern California Edison recently sold its stake in one of the West's largest coal-fired power plants, located hundreds of miles out of state.

But the Four Corners Generating Station in New Mexico still burns coal — only the power that Edison once delivered to California now goes to a different utility's customers in Arizona.

I doubt I even would have posted this story, but for the fact I recently read and commented on Judith Nies' Unreal City: Las Vegas, Black Mesa, and the Fate of the West, c. 2014, in which many pages are devoted to the Four Corners Generating Station. Until I had read that book, I knew nothing about it.


The Spokesman is reporting:

Nearly 3 billion gallons of crude oil will move through Washington on trains this year, and that figure could triple in five years.

And the state sees an opportunity to put a tax on each bbl of oil rolling through the state.

I honestly thought we had moved on from global warming to "at least" climate change and maybe even extreme weather.

I know that we have had to quit talking about extreme weather: it was noted the other day that Florida has not experienced a "real" hurricane in the last decade. Ten years. Hurricane Andrew (Category 5) was back in 1992. Hurricane Opal (a measly Category 3) was the last named hurricane that actually hit the "mainland" of Florida. So, that's extreme weather.

Then we have climate change. I thought that was the first clawback from extreme weather. But apparently not.

I'm sure everyone one saw this in yesterday's news in which the warmists are predicting a harsh winter (memo to self: insert "LOL" here):


“This counterintuitive effect of the global warming that led to the sea ice decline in the first place makes some people think that global warming has stopped. It has not,” Colin Summerhayes, emeritus associate of the Scott Polar Research Institute, said in a statement provided by the journal Nature Geoscience, where the study is published.

That was from Bloomberg.

The warmists are preparing their flock for a harsh winter, and how to explain it. And the word they start with: counterintuitive.

A word that another reader uses is bullshit.
Posted by Bruce Oksol at 5:57 PM No comments:

It appears the Lawrence wells are coming back on-line after fracking completed (see this post for background information).

Production history for this well for past few months:

A history of early production for this well:

Monthly Production Data (sorry about the formatting, but one can probably figure it out):

The Rosemary Eckelberg Is Back On Line; An EOG Wayzetta Well Also Back On-Line After Seven Months Of No Production -- October 26, 2014

Regardless, it's back on-line.
A selected portion of the production history (sorry about the formatting, but one can probably figure it out):

After almost 35 years of production, this Silurian well has passed the 1,000,000-bbls-milestone. It hit the one-million-bbl mark in early September, 2014, but we don't yet have the official word from NDIC yet. I expect to see that data within the next few days.

The well has been taken off-line many times over the years, I assume for two reasons: a) workover; and, b) when the Tioga Hess plant is down for routine maintenance.
Here's the scout ticket (notice the depth) and production data back only to September, 2013: