8:45 p.m. Central Time. Physically beat. Mentally exhausted. Ready to crash. But, before I do ...

What a great country. I'm not going to look at any "oil" stuff or do any blogging about the "current events."


“Look Tina, I’m need you jog in place in a pantsuit with a bass guitar for five minutes and stay on rhythm.” - David Byrne

Recommendation: "Masterclass Official Trailers." There are eighty-three of them. Each lasts about two minutes twenty seconds. I've watched about a dozen of them. Some of them more than once. My favorites, so far: Ron Finley, Gardening; Gabriela Cámara, Mexican cooking; Joyce Carol Oates, the art of the short story; and, I've only begun. Yet to watch: Penn and Teller; Bob Igor.  And 78 more.

What's so great about "Twin Peaks"?

I think I "quit" watching television after seeing "Twin Peaks."

A COVID-19 survivor, but still lots of fun:

And for those who missed this the first eight times I have posted this:

-- from the accordion player, hereself: I first heard this tune on youtube. I loved it but I couldn't find any music for it so I had to learn it by ear.

I'm not sure but I believe I have connected a couple of dots regarding the accordion player. She was known as "fantinigirl92" on YouTube for quite some time, then disappeared for several years. Now it appears she is back, having graduated from university (Edinburgh) and has a name: Lana Elaine Fraser. I'm not entirely sure but it seems they are one and the same.

Enough of this. See you tomorrow. Good luck to all.
Posted by Bruce Oksol at 11:36 PM No comments:

Update On The Oil Tankers Off Long Beach Port -- Just A Drop In The Ocean -- Much More Stored Offshore Elsewhere -- April 29, 2020

Data points:
I know nothing about the credibility of the linked source, but it certainly can't be any worse than CNN or The New York Times.

Fortunately for all involved, no risk of hurricanes.
Posted by Bruce Oksol at 9:20 PM No comments: 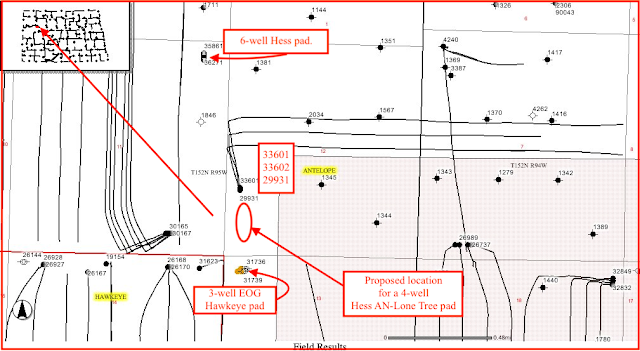 Days of US supply, crude oil: link here: pending. This, I believe, only applies to onshore storage -- does not includes the 20 million bbls of Saudi crude oil off the west coast. 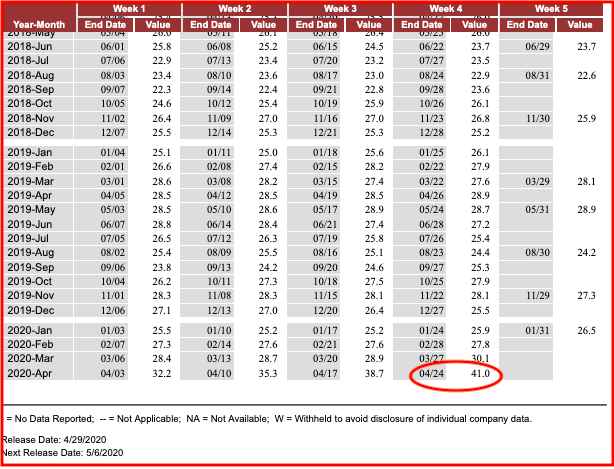 Anticipation: Texas governor will not extend "shelter-in-place" once it expires at midnight tonight. First place I will visit tomorrow -- local Lego mini-bricks and figures. No interest in visiting restaurants. I have learned to have coffee at home for breakfast -- along with chorizo and eggs; jalapeno spam for lunch; and crawfish for dinner. LOL. Barbershops will remain closed, I believe. Sophia will give me my weekly haircut (trim) tomorrow.

Fishing: Sophia and I had our first fishing excursion last night. An unforeseen error on my part disrupted our plans. Sophia did not mind. She just enjoyed watching the fast current after the heavy rains overnight. We will try again tonight, although it will be a bit cooler. The creek should be just as high as yesterday after another strong rainstorm last night.
Posted by Bruce Oksol at 10:48 AM No comments:

At the map at the link, zoom in / zoom out. Place cursor on any of the icons to find the name and the type of ship.

Saudi tankers inside the oval in the screenshot below. 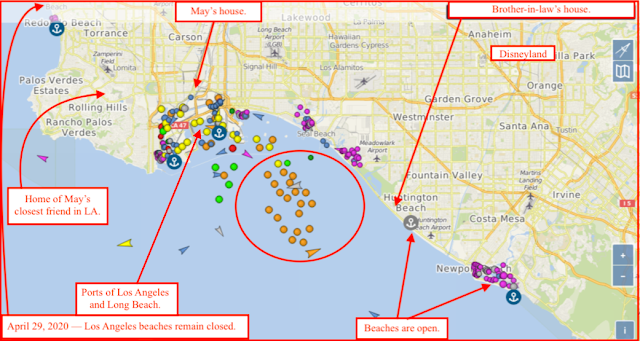 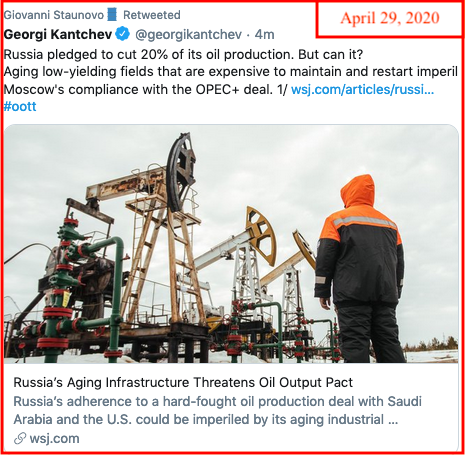 Bakken wells will, in general, come back stronger than ever after being shut in for a few months (or more).
Posted by Bruce Oksol at 10:24 AM 2 comments:

I was anticipating this: Oasis to stop operations in the Bakken. On another note, their recent wells have not been all that impressive lately. At least that's my opinion, based on very, very anecdotal information. Reuters link here.

The other day I posted a note regarding the Bay of Fundy. I had been reading a biography of Wyndham Lewis -- it was my second reading of that particular biography -- where the Bay of Fundy is a big part of his very, very young life. I had fun with Fundy and than moved on.

This morning, at breakfast, while continue to read about evolution in Fortey's book on velvet worms and horseshoe crabs, there is was -- page 210 -- a reference to the Bay of Fundy. Wow, what a coincidence.

But there was even more.

For years, I've been saying that reptiles are a "grab bag" of animals, not well defined, and "getting more press" then they may deserve. Like amphibians they were a crucial transitional group and have had their fifteen minutes of fame. To me, reptiles are defined more by what they are not (or do not have) than what they are (or what they have). I've never read anything along that line before.

Until today. In Fortey's book, page 211, he states much more eloquently than I regarding the reptiles.

Many of the skeletal features of more advanced living reptiles [are] lacking in the very first of their kind. These egg-laying animals prospered, and radiated into a range of ecological niches on land eventually in the air; some became "ruling reptiles," while others returned to the sea. Many did not survive the mass extinction at the end of the Cretaceous Period 65 million years ago.

Fortey refers to these as "egg-laying animals because:


My more rigorous colleagues would expect me at this point to note that reptiles are not a natural group in modern zoological understanding One group of reptiles gave rise to mammals, and another to birds, which are both natural groups descended from common ancestors. This means that reptiles are a set of branches in the tree of life from which some derived branches have been "lopped off"; so they are not the complete ticket.

Reptiles are united by retaining the general characteristics of laying amniote eggs and having neither fur nor feathers nor hot blood (but that may be no longer true, either). So if we were being persnickety, we might always refer to "reptiles" in quotes; but as Stephen J. Gold pointed out some time ago, nearly everyone has a good idea of what the term means, so let's stick with it!

Portcullis: word of the day. Hint: think of all those old English movies about the "knights of the round table."
Posted by Bruce Oksol at 9:47 AM No comments:

Weekly EIA petroleum report: link here --
WTI; following the release of that data:
Re-balancing (or should we now start calling it a "glut"?):

OPEC basket: drops again, now at $12.41. Link here. I have trouble believing the 15,000 Saudi princes are happy with MbS right now, giving away their life-blood for less than $13/bbl, and draining their country's foreign exchange reserves. 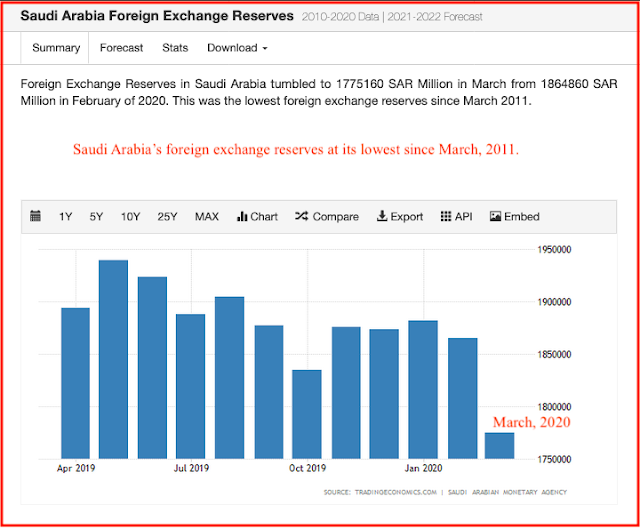 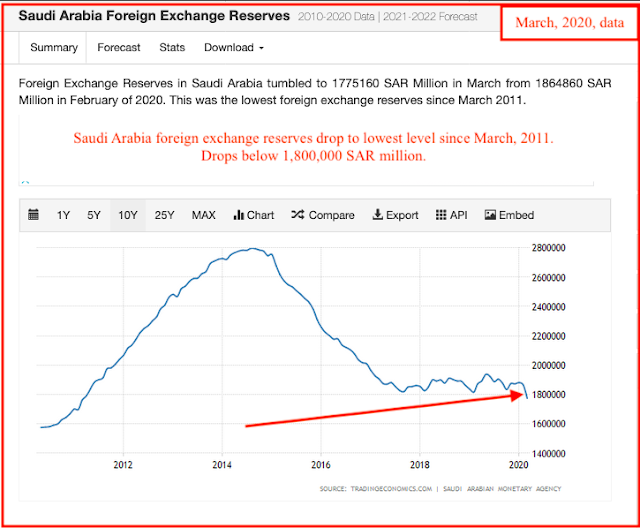 In April, 2020, Saudi Arabia will be borrowing $60 billion. I don't know if that will be reflected in the foreign exchange reserves. If so, we will see a jump in reserves next month. On the other hand, if the $60 million borrowed is necessary to pay for on-going budgetary requirements we won't see that bump.

Last month it was said that Saudi Arabia was building up its foreign exchange reserves in preparation for market-share / price-war scenario. Whether that was true or not, it now seems moot.


The crude oil market garners all the headlines in the COVID/OPEC+ era, and understandably so. But the NGL market is also in turmoil and deserves attention too. Declining volumes of associated gas from crude-focused plays will soon be cutting into NGL supplies. Demand for natural gasoline has been hit hard, along with the crude, motor gasoline and jet fuel markets.

But propane prices relative to crude oil have soared to historically high ratios, in part reflecting recent strong international demand for U.S. LPG exports. As for ethane — the lightest NGL, and the most important feedstock for the Gulf Coast petchem sector — it is going through wrenching changes, with major implications for both suppliers and steam crackers. Today, we begin a short series on the major dislocations that crude-market chaos is spurring in NGL production, ethane rejection, feedstock selection by steam crackers, and ethane/LPG exports.

From yesterday, new permits:
The "Faye" pad:
From the south, running north, and horizontal parallel to the "Faye" horizontals. The Faye wells were
Production period of interest, the Faye pads noted above were fracked in 6/18:: 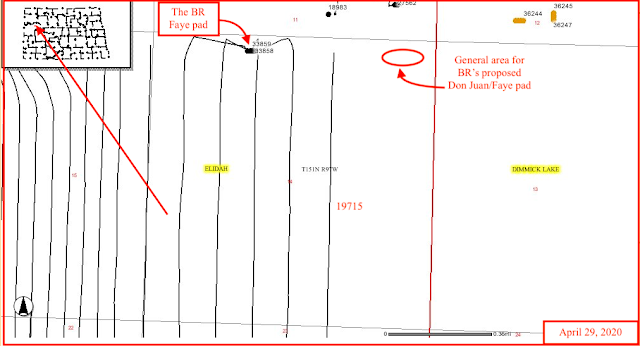 Possibly coincidental, but I doubt it: the movie.
Posted by Bruce Oksol at 7:13 AM No comments: