It's almost comical at this point. Bloomberg is reporting:


[Insert name of Canadian government official here] plans to meet with the U.S. State Department that has been reviewing the Keystone XL pipeline for more than five years, during a trip to Washington between Nov. 11 and 13, according to a statement last month from the provincial government.

“If Keystone XL doesn’t get approved, it will have an impact on U.S.-Canada relations,” [insert name of Canadian government official here] said in the radio interview.

My calendar shows SecState Kerry will be body-surfing off Hawaii in mid-November, but my calendars have been known to be wrong. And, of course, there's not a snowball's chance in a warm house that this premier will see the US president.
Posted by Bruce Oksol at 4:04 PM No comments:

ObamaCare Website Will Be Down On Saturday For Scheduled Maintenance; It's Not Complicated


The glitch-ridden website used to sign up for insurance under President Barack Obama's healthcare law will be down for "extended maintenance" overnight on Saturday, the Department of Health and Human Services said.

The website has been plagued by technology problems and has not worked reliably since its launch on October 1, embarrassing the administration and providing ammunition for Republicans seeking to roll back the law known as Obamacare.

The application, enrollment tools, and "data hub" will not be available from about 9 p.m. ET on Saturday (0100 Sunday GMT) until 9 a.m. ET (1400 GMT) on Sunday, a spokeswoman for the department said in a statement, telling consumers they can call a toll-free call center to apply for insurance in the meantime.

The young child who suggested "10" was about as close to six as anyone -- the number of ObamaCare enrollees the first day the website went live:


It's Not Complicated, ATT
"It's not complicated; shop around," Mr Obama, said earlier.


It's Not Complicated, Shop Around, Mr Obama

A reader alerted me to these wells. I posted data on these wells earlier, but this is one month later. Note the crude oil production increase in both wells, though it is incredible in the first well posted below.

One-hundred-fifty-thousand bbls in 3.5 months is nice, but how about 180,000 bbls in the same amount of time?

I wonder if these wells are choked back; look at all the natural gas that is being flared? I wonder if any of the mineral owners are writing to EOG to shut in these wells until a natural gas processing plant can be built. With permits and environmental reviews that should only take a couple of years. And, of course, shutting in the well is no guarantee that the well will still be this good once it's brought back on line. Whatever.
Posted by Bruce Oksol at 3:46 PM 7 comments:

Bakken 101 -- Stratrigraphy Of The Bakken Pool

For newbies: this is a screen shot from Whiting's corporate presentation, November, 2013.

I believe I have posted this screen shot previously; if not, I have certainly discussed it. Not all pay zones are in every area of the North Dakota Bakken. 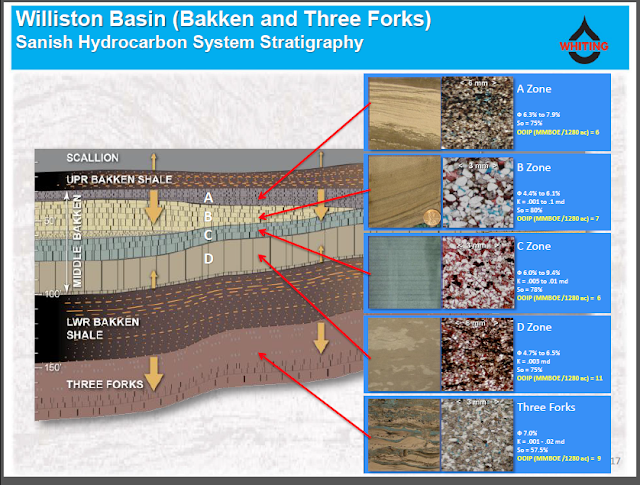 The Scallion is sometimes referred to as the "false Bakken." See first comment below.

Be sure to double-click on the screen-shot to open it in another window. Note the millions of barrels of original oil in place per 1280-acre spacing unit. The recovery rate from the Bakken Pool is variously reported from 1% to 8%.
Posted by Bruce Oksol at 12:49 PM 2 comments:

Regular readers know that I have a "soft spot in my heart" for Whiting. I  have always maintained that Whiting has the best corporate slide presentations. Early on Whiting had some of the best FAQs in their presentations; clearly the corporation was trying to explain to folks what was going on in the Bakken. 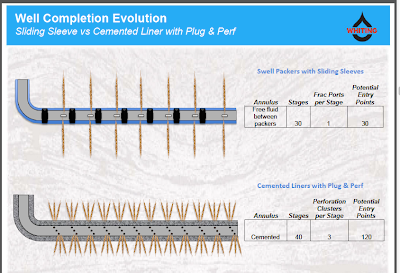 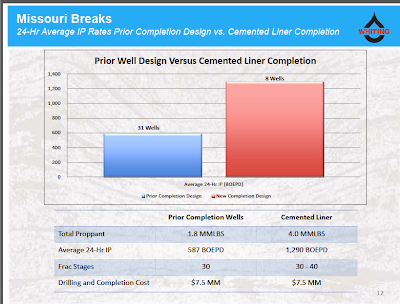 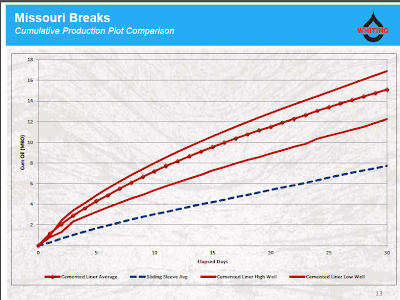 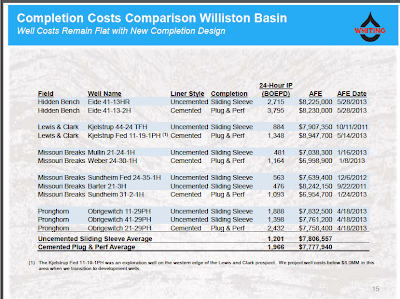 I think the slides are self-explanatory. There are several story lines in these four screenshots, but the biggest story is what this means for the Bakken in general.
Posted by Bruce Oksol at 12:39 PM No comments:

The One-Two Knock-Out Punch: First, Your Policy Is Cancelled; Two, Rates For A New Policy Are Significantly Higher. Oh, One More Thing: Find A New Doctor. Shop Around

The AP is reporting this story which I really can't believe. I think they are making it up:


Dean Griffin liked the health insurance he purchased for himself and his wife three years ago and thought he'd be able to keep the plan even after the federal Affordable Care Act took effect.

But the 64-year-old recently received a letter notifying him the plan was being canceled because it didn't cover certain benefits required under the law.

Death panels? Now that's something they need to worry about.

The Griffins, who live near Philadelphia, pay $770 monthly for their soon-to-be-terminated health care plan with a $2,500 deductible. The cheapest plan they found on their state insurance exchange was a so-called bronze plan charging a $1,275 monthly premium with deductibles totaling $12,700.

It covers only providers in Pennsylvania, so the couple, who live near Delaware, won't be able to see doctors they've used for more than a decade.

Note: that was the bronze plan. Bronze is at the "cheap" end of policies: silver, gold, platinum, molybdenum, and Michelle-certified are the common five high-end plans.
Posted by Bruce Oksol at 9:08 AM No comments:

Bloggers Are The Outspoken Group Most Hurt By ObamaCare -- WSJ

The front page was almost all ObamaCare-related.

Top story, front page, ObamaCare: As the president pushed for a new federal health law in 2009, he made a simple pledge: If you like your insurance plan, you can keep your plan. But behind the scenes, White House officials discussed whether that was a promise they could keep.

Pakistani officials report that a US drone killed the leader of the Pakistani Taliban. Don't we hear of "the" Taliban leader being killed about every other month. A cat with nine lives.

Some House Republicans holding back on push to delay/defund ObamaCare. Finally.

One more Achilles heel for ObamaCare: outspoken group bears brunt of canceled health plans. Somebody has to pay more to enable America's uninsured to take part in the health-coverage marketplace. Unfortunately for the Obama administration, those people tend to be politically savvy and very vocal. So which "outspoken group" is bearing the brunt of canceled health plans? People who blog! LOL.


Mr. Hamilton runs MacObserver.com, a website for fans of Apple equipment based in Durham, N.H. He is one of the 10 million or so who buy insurance on the individual market, don't qualify for subsidies under the Affordable Care Act and recently received notice that their current plans don't comply with the law's standards and will be canceled.

Mr. Hamilton, 42, said he expected to pay more. But his rates are expected to rise by far more than the 20% he had calculated. And when Mr. Obama in Boston this past week said most canceled plans were "substandard," he went online to complain, vociferously.

According to a 2010 study by the Kaiser Family Foundation, a health-policy think tank, 45% of people who buy their own insurance are self-employed or small-business owners. A quarter are working but don't have access or can't afford employer-provided insurance.

Many are young, or employed part-time. An additional 11% are retired but not yet eligible for Medicare.

The Supreme Court's ruling ending federal oversight of elections in mostly Southern states has opened the door to redistricting and minority legal challenges in cities such as Pasadena, Texas.

Researchers are at odds over whether raising the minimum wage will reduce the extent to which fast-food workers use government benefits to supplement their pay.

Government shutdown? What government shutdown? U.S. factories notched their fifth straight month of expansion in October, bucking expectations that the federal government's 16-day shutdown would chill activity. Plastic manufacturers had a particularly good month, producing a record amount of highway construction cones necessary to shut off access to national monuments, like the WWII  and Vietnam memorials in Washington, DC.

Maybe more later; I'm off to soccer, swimming events.
Posted by Bruce Oksol at 9:07 AM 2 comments:

The Minot Daily Press is reporting:

"That is record territory, as the record amount of moisture received in any one calendar year was 1975, and that was 26.99," he said.

"We had 1.0 inch of snowfall during the month (of October), and this compares with the half-inch we had for the same month last year and the long-term average of 2.5 inches," he said.

"This past month of October, we had a monthly average temp of 41.2 degrees, which was 1.4 degrees above last year's average temps for the same month but was below the 107-year long-term average of 43.9 degrees," Tarasenko said.

Meanwhile, President Obama signs executive order to increase costs of all new infrastructure construction to fend off global warming.
Posted by Bruce Oksol at 8:41 AM No comments:

I'm a strong supporter of the food stamp program.

Certainly the reporter could have come up with a better example if trying to find support for the program. USA Today is reporting:


[One recipient] says she received a little less than $550 a month in food stamps and now will receive $497. Crisp, a babysitter who brings home about $830 a month, says the food stamps help her buy her family fresh fruits, vegetables and meat.


Crisp worries now she may end up trying to supplement her family's groceries by going to a food bank or cutting into her electric or gas money for the month. The cut, she says, also means she will have to buy more canned fruits and vegetables, foregoing her daughters' favorite fruit, kiwi, and buying packaged meat.

"Cut into her electric or gas money for the month?" My hunch is that the war on coal (note: she is from Ohio), is probably costing her more than what she is losing in food stamps.

"Favorite fruit?" Kiwi. Back in 2008, $1.80/pound vs 45 cents/pound for bananas (I doubt the relative price differential has changed much).

"Will have to buy more canned fruits and vegetables?"
Posted by Bruce Oksol at 8:35 AM No comments:

Memo To Self: File Under Cool -- North Dakota To Get Its Own Submarine


North Dakota will get a special present today, its 124th birthday, when the nuclear-powered attack submarine, the USS North Dakota, is christened in Groton, Conn. It’s the second U.S. Navy ship to be named for the state. The first was a battleship that was in service from 1910 until 1923.

The ship is part of the Virginia-class attack submarines, designed to seek and destroy enemy submarines and surface ships. It will carry Tomahawk missiles, as well as torpedoes and other munitions.

Fracking
Earthquakes: not due to fracking, Rigzone

Miscellaneous
Oil pipeline spill likely due to "act of God"
MDU's Diesel Topping Plan Construction Coming Along On Schedule
Posted by Bruce Oksol at 6:49 AM No comments: