July 15, 2017: in the original post I talk about the imagined experience of recharging an EV on a cross-country drive. Here's where we stand (see graphic below) and the tea leaves do not suggest things will improve any time soon with regard to batteries. When looking at the graphic below, think about all the service stations across the country; the number of pumpers at each station; the size of the "footprint" of the service station pump areas; and, the length of time one car takes to refuel. Now consider if a significant number of those cars were EVs, all requiring 20 minutes to charge just enough for 60 additional miles. Add this: with your conventional gasoline automobile you can stop at any branded gasoline station (Shell, Chevron, XOM, etc) but if you have a Tesla you have to use a Tesla charging station. No saying how the other EVs will "operate" their recharging system. Source for the graphic: 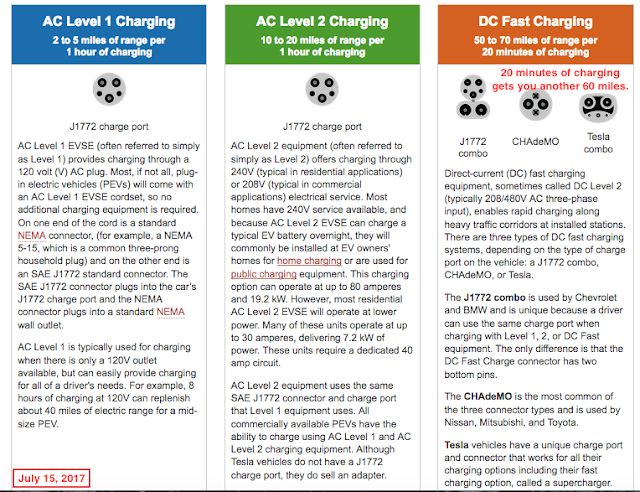 Over the weekend I read an "op-ed" by Bernie Sanders. He was tired of Trump's tweets. LOL. Bernie was writing bout his summer vacation and how they were just getting ready to visit Utah. I thought the entire piece very boring, so I assume the same thing: talking about my week in Montana will be very boring to readers. If I do write about my trip it's for the archives, for future reference, and I would encourage readers to ignore it. It will be as boring as Bernie's travelogue -- maybe more so. LOL.

US cities are calm, certainly compared to Hamburg. I guess Angela Merkel took a page from the Baltimore mayor's playbook: give them some room to destroy.

Gasoline is cheap, although I was surprised to see it slightly higher here in north Texas than when I left, currently about $2.19/gallon.

We have "everyone" falling all over themselves writing about EVs. No one talks about the infrastructure. It will be interesting to see all those EVs on the road with drivers looking for charging stations. Seriously. Even when EVs become mainstream (air quotes would be good here), drivers are going to say, "Hey, does that look like a charging station?" "No, dear, that's  Netflix kiosk."

I think the big takeaway this week is the separate paths the US and China are taking vs the path that the EU is taking.

A reader hit the proverbial nail on the head when he wrote this:


It seems very obvious that Germany and most of Europe would want the US to follow the same energy policy as they are promoting for themselves. They have to be very afraid of the huge, and I mean HUGE economic advantage the US will have with our inexpensive fossil fuel economy.

That is our future If we don't allow the "left" to destroy it.

One can only hope that Trump is not a one-off. If after four years, "we" elect another Obama all was for nought.

The only way the EU can hobble the US, is to convince the US to go down the same "energy road" as the EU. China will not be so crazy. In fact, one can argue, the Chinese are being duplicitous -- if that's the right word: encouraging the EU to encourage the US to go "green," thereby hobbling the entire western world. Meanwhile, China will continue going its own way.

Futures mean squat, but right now it looks like another nice day for the market: all three indices (S&P; Nasdaq; and, Dow) are in the green (futures at 9:50 p.m. Central Time). The jobs report this past week was incredible; it's funny: I can read a dozen stories after the jobs report is released, and remain confused about what it might mean, and yet, Matt Drudge seems to figure it out immediately. If Hillary were president, the media would be crowing about the jobs report and the economy and the market. But she isn't. And they aren't (crowing about anything, except the president's tweets).

So, I'm in a great mood tonight, looking forward to seeing what the market does tomorrow.

My only bit of sadness: not being on Lake Flathead. Wow, that was incredible. I would write more but I don't want to come off as being as boring as Bernie.

From the WSJ over the weekend:


Leading central banks plan to withdraw some of the stimulus measures they have put in place since the financial crisis. But their timing seems a little puzzling: Inflation, which is already below their targets, is falling world-wide.

The decline in inflation is a mystery since the global economy appears to be growing at a faster pace than during recent years, while unemployment rates continue to edge lower.

According to central bankers, inflation is generated by the gap between the demand for goods and services and the economy’s ability to supply them. When that output gap is wide, inflation is lower, and when it is narrow, prices grow more quickly.

Low inflation is a symptom of a weak economy, something they want to avoid as much as high inflation, a sign of an overheated economy.

Try as they might, central banks have been unable to reach their inflation targets over recent years, despite their success boosting growth and lowering jobless numbers. That has raised questions about the reliability of the traditional link between the output gap and prices.

Is it different this time?

The writer and the analysts are blowing off the effect "cheap energy" might have on inflation:


Much of that decline was due to easing energy prices. But even excluding that volatile item, and similarly choppy food prices, “core” inflation is slowing in many places.

That isn’t a recent phenomenon. Core inflation in developed economies hasn’t changed much in the years since the financial crisis, never reaching the 2.5% rate it stood at in September 2008, when Lehman Brothers collapsed, or going below the 1.1% rate it hit in December 2010.

Central bankers are struggling to explain why inflation isn’t responding the way the textbooks say it should to an improving global economy and falling jobless rates. According to the OECD, the unemployment rate in developed economies fell to 5.9% in May from 6.3% a year earlier.

One wonders if analysts have discounted cheap energy too much?

I will wager that in the next six months we will start seeing articles on the effect low energy prices are having on the global economy and the low inflation rate.


No matter how bad your aim is, at three feet and less, you cannot miss. I'm wondering if this works on "cockroaches." Probably not.

Legal in California? Yes. But Amazon won't ship any bug assault gun to California. Can't make this stuff up. 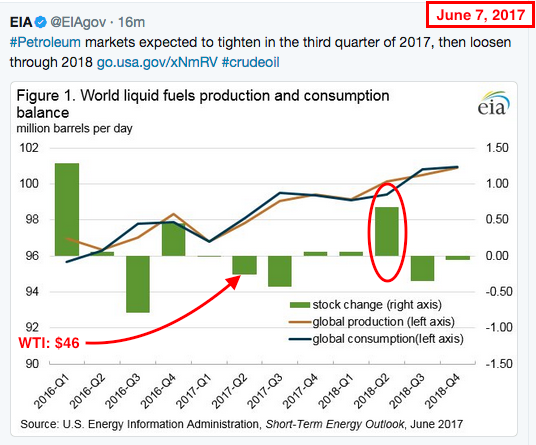 Note the drawdown in global crude oil reserves forecast through the end of 2017 (this graphic was posted in 2Q17). The forecast:
CNBC is suggesting the same. Link here.

I don't think any of this is new for regular readers of the blog.
Posted by Bruce Oksol at 8:40 PM No comments:

Tesla sales grind to a half in Hong Kong: after a tax incentive for electric cars was slashed, new registration of Tesla vehicles dropped from almost 3,000 to zero. -- from the WSJ --


Tesla sales in Hong Kong came to a standstill after authorities slashed a tax break for electric vehicles on April 1, demonstrating how sensitive the company’s performance can be to government incentive programs.

Not a single newly purchased Tesla model was registered in Hong Kong in April, according to official data from the territory’s Transportation Department analyzed by The Wall Street Journal. In March, shortly after the tax change was announced and ahead of the April 1 deadline, 2,939 Tesla vehicles were registered there—almost twice as many as in the last six months of 2016.

I have trouble understanding that. Seriously. Rich, rich, status-seeking folks in Hong Kong only buying expensive toys if they come with a tax incentive.

By the way, Elon Musk tweeted the first (?) pictures of his "first production Model 3 as it rolled off the production line." The photograph is here.

Meanwhile, about Volvo. Simply staking out their ever-shrinking niche -- also from the WJS --


Volvo, unlike just about every major car maker, doesn’t even have an electric car in the market today. Its big winner is a luxury SUV, a gasoline-powered vehicle whose top-of-the-line model is further enhanced, yes, by a supplemental electric drive.

The hybrid version of the XC90 comes with a $75,000 price tag: A customer who wants a hybrid is also presumed to want the 19-speaker, 1,400-watt sound system, the self-parking package and every other option Volvo can stuff into a $75,000 SUV.

Therein lies the real point. Volvo’s announcement signals nothing about the electric-car future and everything about Volvo’s niche marketing.

An incredibly good article, and I had the entire story pegged (although I never posted my thoughts) except that part about $75,000. I had no idea a Volvo costs that much. Cars in that price range are not on my radar scope.

Volvo's impact on global car sales? Not much (from wiki):


In 2015, Volvo sold more than half a million cars for the first time in its 89-year history. Volvo reported strong sales from all three core global regions. Sales in Europe rose 10% in 2015 to 269K, representing over 50% of total global volume. Volvo’s revival in the US gained momentum, with sales up 24% in 2015, while China was flat amid a challenging sales environment, but sales were up 11% in the fourth quarter.


Original Post
Everyone was obsessing about President Trump's tweets -- meanwhile, he launched his energy revolution -- that's what the IBD op-ed writer suggests.

The writer says that President Trump launched the US energy revolution.

It was all about timing and a lot of luck. Had faux environmentalists been just a bit quicker, it's a real possibility they could have killed hydraulic fracking in its infancy, but the public-private partnership developed too quickly for anyone to stop it. But that doesn't mean the faux environmentalists didn't try. They were successful in getting the Keystone XL killed (even though Hillary Clinton initially supported it); they came close to killing CBR; and, they delayed DAPL for several years. They tried their best to stop fracking with fake studies and fake news. It took a US senator to get the BLM moving in the Fort Berthold Indian Reservation, one of the key locations in the Bakken.

I maintain that President Trump caught the wave and rode it. He did not launch the revolution; he made sure it kept going. Hillary/Sanders/Schumer/Pelosi would have killed it; California would have seen $5-gasoline; and, America would have been dependent on Saudi Arabia and OPEC once again.
Having said all that, it will be interesting to see how IBD saw the development of the revolution.

From the linked op-ed:

Too bad everyone was hyperfocused on his tweets.

On Thursday, Trump said he was ushering in a new energy policy that marked an end to decades of fretting about an alleged "energy crisis" brought on by supposed limited domestic supplies and an insatiable demand for fossil fuels.

"We now know that was all a big, beautiful myth," Trump said in remarks at the Department of Energy. "The truth is that we have near-limitless supplies of energy in our country."

I'm not sure why it was "too bad" everyone was hyperfocused on his tweets. I think it's great that the mainstream media is focused on his tweets -- mostly because it speaks volumes about those journalists. [By the way, the vast majority of Americans complaining about the president's tweets have never read one of his tweets at Twitter.] 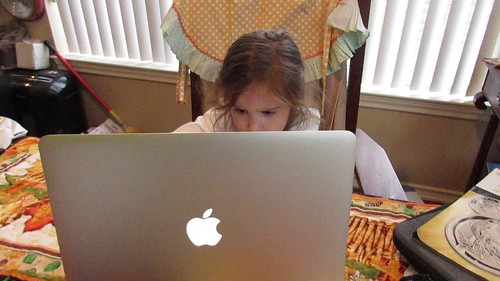 Posted by Bruce Oksol at 1:42 AM No comments: