The coldest place on earth today was in Hettinger, ND.

Temperatures at all official global sites were checked -- including the North Pole, the South Pole, Siberia, Russia, the rest of the US, etc., and the coldest temperature recorded at an official weather monitoring/recording station was in Hettinger, ND.

Hettinger is in southwest North Dakota, near the South Dakota state line.

Note where the all-time lowest temperature for North Dakota for this date was recorded -- Parshall, ND -- the center of the Bakken.


Confirmed: not a single passenger death on a commercial JET aircraft anywhere on earth in 2017. First time in sixty years and a first since such aircraft became the dominant form of travel.

Saudi, UAE introduce VAT in first for Gulf -- France24 -- Don sent me the story. I had seen it earlier; had not yet linked it. From the lede:


Saudi Arabia and the United Arab Emirates introduced value-added tax from Monday, a first for the Gulf which has long prided itself on its tax-free, cradle-to-grave welfare system.

Saudi Arabia compounded the New Year blow for motorists with an unannounced hike of up to 127 percent in petrol prices with immediate effect from midnight.

They are the latest in series of measures introduced by Gulf oil producers over the past two years to boost revenues and cut spending as a persistent slump in world prices has led to ballooning budget deficits.

The five percent sales tax applies to most goods and services and analysts project that the two governments could raise as much as $21 billion in 2018, equivalent to 2.0 percent of GDP.


On September 2, 2017, the rate at which Saudi's foreign reserves could deplete to ZERO was five years. The kingdom was losing anywhere from $3 billion to $8 billion a month.

Most recently, their cash reserves increased slightly but that came just as Prince Salman held 100's of princes for ransom. I think the media was suggesting that Prince Salman hoped to get $100 billion from the princes. That would cover $5 billion / month for twenty months.

Losing market share and price of oil struggling to stay above $65 (Brent) suggests that Saudi is not out of the woods yet, especially considering all the challenges facing them: a) war with Yemen; b) war with Iran (but I repeat myself); c) Prince Salman's grand Vision 2030 plan; and, d) the IPO.

We've seen this movie before but the prequel was Iran; the sequel is Saudi Arabia. And yes, there will be many sequels.


On January 1, 1977, Mohammad Reza Shah held a long audience with Court Minister Alam and accused the Saudis of betrayal. "We must give them the thrashing they deserve." The next day was worse. Court Minister Alam was greeted with the shattering news that Iran faced financial ruin. "We're broke," admitted the Shah.

"Everything seems doomed to grind to a standstill, and meanwhile many of the programs we had planned must be postponed."

He expected oil exports to fall by as much as 30 percent. When Alam tried to offer reassurance, the Shah railed against Yamani and the Saudis. "It's going to be tough," the Shah admitted. A few days earlier, during an interview with the newspaper Kayban, the Shah had foolishly lashed out at his own people, blaming them for Iran's financial crisis and implying they needed to tighten their belts. Iran had become "a paradise of indolence and sloth." It was time for everyone to roll up their sleeves.

"If we do not revise our policies we shall not survive."

".... if Saudi floods the market with oil, ... it may force us to decrease our production. And if this happens, it will affect our economic plans, our military buildup, and especially our foreign aid program ... I am worried about our internal developments," the Shah said in an interview with BusinessWeek."

This page will not be updated. The Whiting McNamara wells are tracked here. Earlier I posted:

The two McNamara wells have obviously been fracked; back on conf status, but production data provided:

I say this almost every January 1: I think the Rose Parade is too short. It could go for another 30 minutes and I would not tire of it. It is so much better than Macy's parade. Unless one likes balloons.

Had May and I settled in southern California after finishing school, we likely would have lived in South Pasadena. That was where I lived for four years, about a mile south of Colorado Boulevard. At one time I knew Pasadena/South Pasadena as well as Williston. Well, not quite.

I vividly recall being introduced to Trader Joe's in South Pasadena and Bob's Big Boy at the east end of Colorado Boulevard. [On return trips to Pasadena, it's my impression that light rail has significantly disrupted the community, but I may be in the minority with that opinion.]

And had we retired in South Pasadena, May would have become the little old lady from Pasadena -- the terror of Colorado Boulevard in her yellow little MG -- her first sports car back before we got married. She still can't keep her foot off the accelerator.

I don't recall if we were married when this photo was taken or if we were still dating. This was taken at her parents' home in San Pedro. Her Hispanic father was a 30-year US Army veteran, having served in WWII, the Korean War, and the Vietnam War. He met his future wife while serving in South Korea, on "R&R" to Japan, where he met and married a young Japanese woman, our granddaughters great-grandmother.

It should be noted, that May has not changed in appearance after all these years. 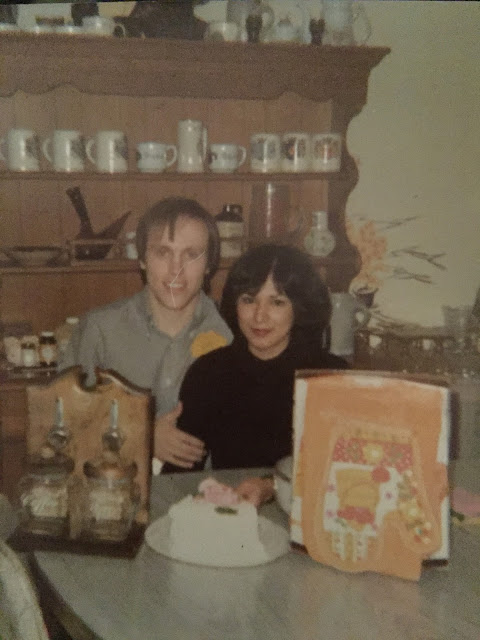 The CLR Bratlien / Melgaard Wells In Divide County Have Been Updated -- January 1, 2018

Update here.
Posted by Bruce Oksol at 10:39 AM No comments:

Random Update Of CLR's Rath Federal Wells That Are In Process Of Being Completed -- January 1, 2018

This page will not be updated. Several CLR Rath Federal wells have moved from SI/NC to conf and are now reporting production data.

The BR Dodge Wells In Dimmick Lake Wells Soon To Be Reported -- January 1, 2018

November 21, 2018: it now appears that the Dodge wells are in "full production." The jump in production began in early 2018. Typical production profile looks like this, this is for #32977:

May 19, 2018: wells have recently been fracked; production data updated; I do not understand what I'm seeing with these new BR Dimmick Lake wells:
February 16 2018: huge jump in production; see this post. 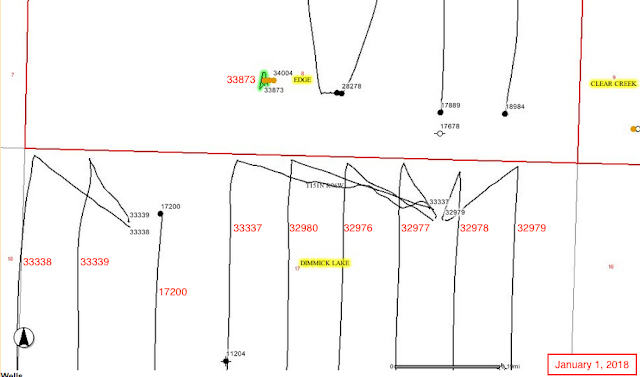