Data For Twenty (20) Wells Coming Off Confidential List Should Be Reported Monday -- January 3, 2016

The big question: will we go below 55 active rigs by the end of the first week in January, less than 55 rigs by COB January 8, 2016? Poll at the sidebar at the right.


Russia pumped a record 534 million tonnes of crude oil in 2015 even as it reeled from a fall in oil prices caused by a supply glut.

But the recent renewed slump in oil prices -- with Brent crude falling to an 11-year low last month -- casts a shadow on the prospect of economic recovery.

Russia may be setting records but overall production has been essentially flat since at least 2007 (that's as far back as this graph goes), but if numbers hold, that 10.73 brings the dashed line (Russia) up quite a bit: 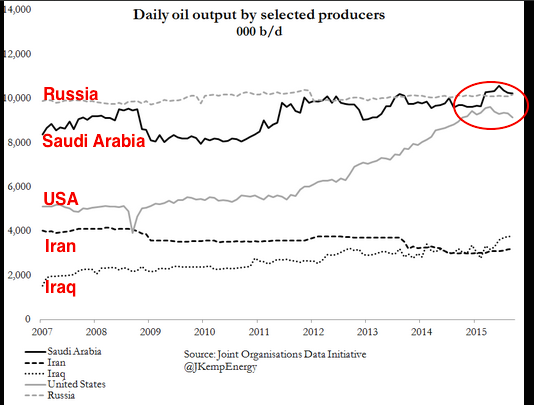 The Olympian reports that Union Pacific could ship one million gallons (yup, gallons) of Bakken crude each week:


Trains operating on Union Pacific Railroad lines through Lewis and Thurston counties could be carrying 1 million gallons of Bakken crude oil weekly, according to a notification issued in early December and highlighted by Lewis County Emergency Management last week.

The rail line previously didn’t report transporting that much oil per train.

Thurston/Lewis county are in western Washington state with Seattle, Tacoma, and Olympia in the area. Lewis County is south of Thurston County, sort of in between Seattle-Tacoma-Olympia (to the north) and Portland (to the south).

Again, this is an interesting way for an anti-oil newspaper to post the numbers. NO ONE measures the amount of oil being transported by rail (CBR) in gallons. In barrels, one million gallons = 24,000 bbls -- a pittance in the big scheme of things. The Bakken produces 1 million bbls//day.

And the article continues:


Union Pacific lines expect no more than one train per week carrying 1 million gallons of oil or more to pass through Lewis and Thurston counties. Most trains are enroute to the Portland-Vancouver area.

Union Pacific issued a notification in June 2014, stating the company did not transport enough Bakken crude oil to meet the threshold at that time.

Burlington Northern Santa Fe’s last notification was released in September, stating it was transporting an estimated 10 to 18 trains carrying 1 million gallons or more of Bakken oil through Thurston and Lewis counties.

Hardly worth noting except .... the "Look West!" saga continues.

NDIC's Daily Activitiy Report Index Has Been Down All Weekend -- January 3, 2016

All the other links work fine.  Daily activity report index down.

Possibly, a refresh or end-of-the-year housekeeping.

Beaver Lodge oil field has been updated.  It is interesting to note that many of these wells, even after three years have not reached total production that wells drilled this past year reached in three or four months. Having said that, the old Bakken wells are getting to total production numbers that took ten to twenty years for Madison wells to reach. And having said that, Harold Hamm drilled some great Red River wells in 2007 - 2008 that rival anything the Bakken wells have done.

Jim Creek oil field has been updated.
Posted by Bruce Oksol at 6:08 AM No comments:

Later, 10:04 a.m. Central Time: I was "somewhat" wrong regarding the statement I made about The Guardian and $7.3 million (the reader posting the first comment was exactly correct -- it should have been "$7.3 milliard" if using a British term): 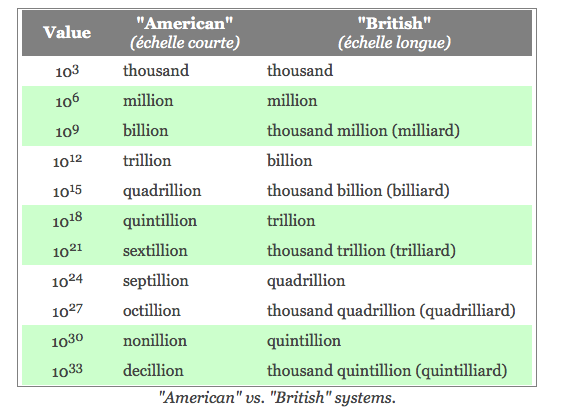 And finally, another great link from today's Guardian: VisiCalc.


Original Post
If you arrived at the site looking for news on the Bakken, scroll down or to the sidebar at the right. This post will have nothing about the Bakken.

For those addicted to the blog, the #1 on-line newspaper is The [London] Guardian. It has:
Some articles from the Guardian today:
And that's just for starters; I could  have gone on for quite some time. I did not see any articles about the Bakken boom going bust.


Entrepreneur Elon Musk’s Tesla Motors Inc. hit the low end of its latest target to deliver at least 50,000 vehicles for the year, shipping 17,400 vehicles in the fourth quarter.

While that’s less than the 55,000 Tesla had projected in a February letter to shareholders, it was in line with its revised estimate of 50,000 to 52,000 from November.

Yeah, a month ago. Hard to miss on a forecast less than a month old.


Original Post
The numbers should be out tomorrow. This article is a nice prelude.


Automakers have enjoyed an unequaled run of success in the United States because of pent-up consumer demand, cheap gas prices and low interest rates. But despite record sales, manufacturers must continue updating their vehicles and improving technology to keep the good times rolling.

As the auto industry tallies its final numbers for 2015, it appears certain that annual sales in the United States will eclipse the previous record of 17.4 million set in 2000. Yet while the industry basks in its accomplishment of returning to sales levels not seen since before the most recent recession, the market looks far different today than it did 15 years ago.

And it's only going to get better. Have you all seen the new Ford commercial? I can't find the one I'm looking for, so this will have to do:


The subway-riding-New York Times reporter who said cars would be obsolete / gone by 2025 is a nutcase.