February 2, 2018: petrolithium and the Paradox Basin.

August 14, 2017: The region is home to the Paradox Basin, which is estimated to hold between a quarter to a third of the nation's domestic potash resource.

December 17, 2015: random update on the Moab/Paradox Basin, from MDU perspective.

May, 2015: Cane Creek shale of the Paradox Basin, geology report/summary.

Without the aid of pumps or fracking, the oil just flooded out — more than 600,000 barrels in its first year, making it the nation’s most productive on-shore well in 2012.
The hydrocarbon bounty, however, includes unexpectedly large amounts of methane and other components of natural gas that Fidelity has to burn off because there is no way to get those fuels to market.

To solve its delivery problem, the company proposes an intensive network of pipelines that is fueling a backlash among red-rock recreationists and preservationists alike.

April 13, 2014: Million-plus EURS in the Paradox Basin for MDU, far exceeding Fidelity EURs in the Bakken.

Ah, yes, the things I forget to link. I just noticed that among the myriad oil basins I have linked at the sidebar at the right, somehow I forgot to include the Paradox.

Here is the USGS pdf on the Paradox Basin, dated 2011.

Here are a few posts from the blog that are relevant: 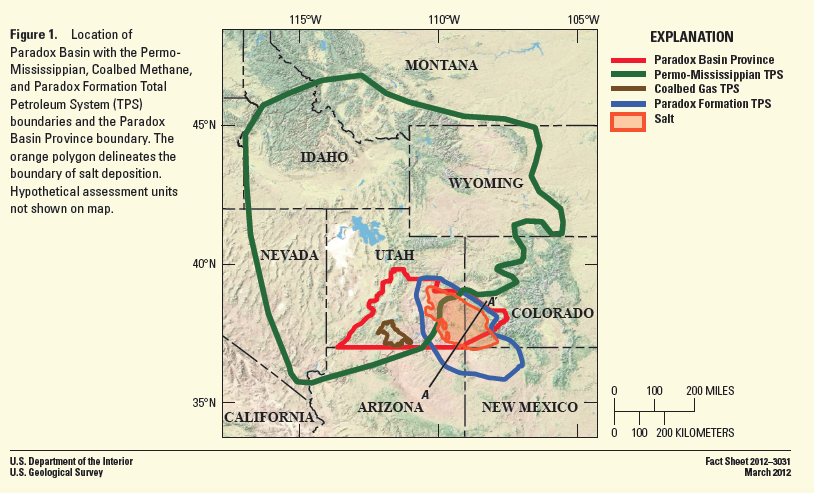 Email ThisBlogThis!Share to TwitterShare to FacebookShare to Pinterest
Labels: Petrolithium