A review is at this link.


Anyone looking for a comprehensive review of the controversies associated with fracking is going to be disappointed by this short book.

After having ploughed almost all of its 170 pages I found, near the back, the following sentence:

“I won’t go through all of the contested issues, because the chapters in the book provide a basis to carve out your own analysis looking at some of the main peer reviewed papers”.

So the message is that if you want to make up your mind about shale then go to the peer reviewed literature. The implied message in this, made explicit at times, is that many opponents of the shale gas industry don’t do this and many members of the public rely too heavily on rumour and panicked reports leading to what Michael Stephenson claims is a low quality to the public policy debate. The public policy debate needs to be guided by academic scientists in peer reviewed papers…..like him.

From a political point of view, it looks like "we" were lucky that fracking "took off" during the Barack Obama presidency. That's counter-intuitive but it's accurate.

Speaking of books. In this weekend's edition of The WSJ, page C12 in "The Review" section is a book review of Tina Packer's Women of Will. I have actually read this book, within the last six months I suppose. I got an advance copy (free) to review. I found the book pretty "awful." Here was my review over at Amazon:


I can't read any book on Shakespeare to its conclusion when the author fails to mention Brenda James, and when scholars opine that an 8th grade graduate of a rural school in the 16th century could have written these plays.

This author takes it to extremes, suggesting that WIlliam Shakespeare of Stratford-on-Avon might even have begun writing his first play ("Henry VI Part I") while still in (middle) school, as the play is "stuffed with fights, and the dialogue between the men is all bombast and pontificating..." -- p. 9.

Brenda James does a much better job discussing the women in Shakespeare's plays because ... hello! ... she identified the "real" Shakespeare about so much more was known.

A very, very nice update of the changing map of the Mideast. A subtext of the story: "Syria and Iraq are imploding, unlike nations in the region with more history and tradition."


But now it may all be coming to an end. Syria and Iraq have effectively ceased to function as states. large parts of both countries lie beyond central government control, and the very meaning of Syrian and Iraqi nationhood has been hollowed out bythe dominance of sectarian and ethnic identities.

The rise of Islamic State is the direct result of the meltdown. The Sunni extremist group's leader, Abu Bakr al-Baghdadi, has proclaimed himself the new caliph and vowed to erase the shame of the "Sykes-Picot conspiracy." After his men surged from their stronghold in Syria last summer and captured Mosul, now one of hte Iraq's largest cities, he promised destroy the old border. in that offensive, one of hte first acitons taken by ISIS (as his group is also known) was to to blow up customs checkpoints between Syrian and Iraq.

Huge, huge story and one of the big stories continuing to play out. 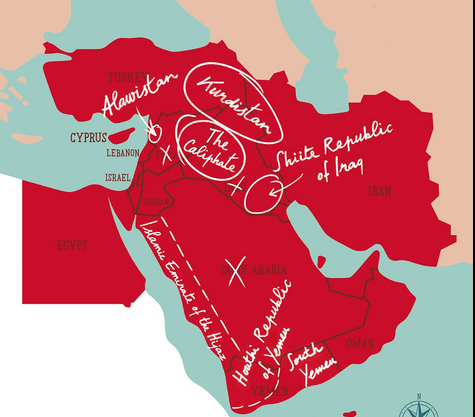 That "x" over "Saudi" is very, very interesting. It's just a matter of time before the House of Saud falls.
Posted by Bruce Oksol at 11:52 AM 1 comment:

The Saudi budget deficit will be more than twice its own forecast, a leading research firm has said, forcing the kingdom into the debt market for the first time in more than a decade.

Hit by plunging crude prices, the world's biggest oil exporter will post a deficit of $106 billion, compared with a government projection of $39 billion.

The kingdom that exports 7.0 million barrels per day on average will see oil revenues fall by 35 percent to $171.8 billion in 2015.

Total revenues are forecast down 33.7 percent at $185 billion, while public spending is expected to remain almost unchanged at $290.9 billion.

Jadwa said the government is highly expected to return to the debt market for the first time in around 15 years despite its massive reserves.

Saudi Arabia has massive foreign reserves, which stood at $714 billion at end February, but Jadwa said borrowing would eliminate the need for the reserves to be the sole source of deficit financing.

One can do the math. Yes, $700 billion is a huge cash reserve, unless one reduces it by $100 billion every year.

My hunch is that Saudi's 2015 budget did not forecast costs to fight ISIS. A single F-15 costs upwards of $30 million.

In addition, among the top 20 economies projected for 2035, Saudi Arabia will be among the fastest growing. Growing economies use a lot more energy, and Saudi's domestic oil consumption issue is a well known problem for the kingdom.
Posted by Bruce Oksol at 9:04 AM No comments:

Free timed parking to begin in downtown Williston; 3-hour limits for the most part. Goal is to get downtown employees to open up parking in front of their own stores.

On-line jobs in Williams County have dipped slightly. North Dakota saw 23,496 open and available positions in March 2015, an 11.5 percent increase over February, according to the latest Job Service North Dakota figures. But data continue to show the effect in some northwest counties, where oil production rules, in response to oil prices that have dropped by more than 50 percent since the summer.

The McKenzie County Healthcare Systems, Inc., which was planning to break ground this summer on a new replacement hospital and clinic, as well as plans to modernize the Good Shepherd Home long-term care facility in Watford City got the "worst of the worse" bad news when bids came in $21,790,899 higher than originally budgeted. "Total bids came in at $79,147,609, which is $21,790,899 over our budget," states Dan Kelly, McKenzie County Healthcare Systems, Inc. CEO.