Forbes: only 1% of the Bakken play breaks even at current oil prices.  For the archives.

Dickinson Press: US oil refiners look abroad for crude oil supplies as North Dakota boom fades. This is a Reuters story. For the archives.

Girl Scout cookies now $5 / box in some parts of the country. Did they just price themselves out of business? I thought $4 / box last year was approaching the limit, but then a single croissant in Starbucks is a couple of bucks.

November 4, 2015: EOG added another permit to this area. It is is section 25-152-95, in the NWNW corner where the dark circle is located in the first graphic below.


Original Post
Some days ago, EOG had permits for a number of new Hawkeye wells in Clarks Creek/Antelope oil fields. This was the graphic I developed to capture those new permits. 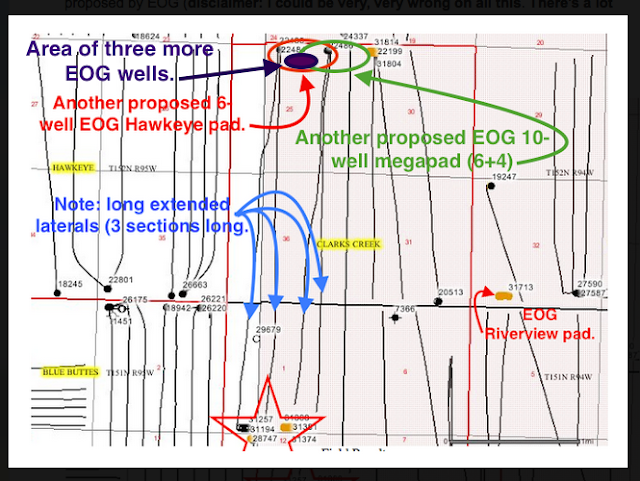 First, this is a graphic of the "entire area" with the left half marked "A" and the right half marked "B" to correspond with the graphics down below. 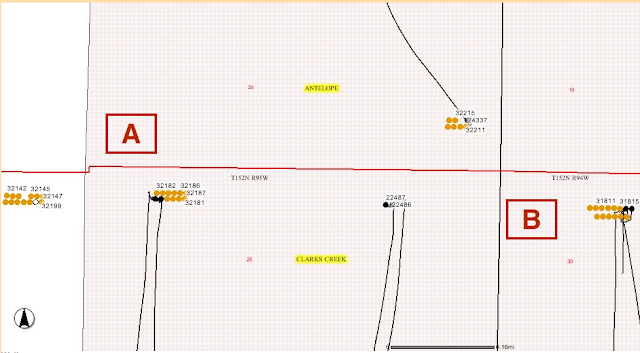 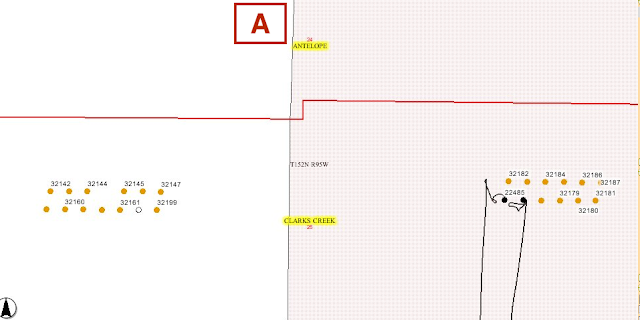 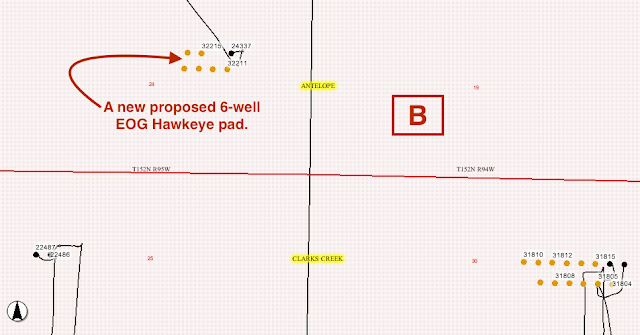 Posted by Bruce Oksol at 7:02 PM No comments:

Note: for readers with knowledge about the Bakken, and particularly the new SI/NC rules, your input would be much appreciated. I posted my response below but could certainly be wrong on some of the details.

In response to a post regarding a well on SI/NC (DUC) status, a reader wondered whether operators might be using the relaxed standards to delay reporting otherwise "confidential" information. It's a very good question because the well at the linked post certainly must be fracked and yet it remains on the SI/NC list without a completion date, an IP, or any frack data at the file. It's possible the operators are using the relaxed standards to delay reporting fracking data, but that's hard for me to accept. [Later. I was completely wrong on this. This is very, very basic. Even if a well goes to SI/NC, when it comes off conf all data must be published; SI/NC does not delay reporting activity.]

[Update: see first comment; this particular well has been fracked; information at FracFocus.]

Below is my "official" response to the question, but I can see where I might be wrong.

This will also be tagged as Page 2 of FAQ.


This is how I see it. At the six-month mark, the wells come off the confidential list. In the old days, if they were not completed by that time, they went to DRL status. That was because once a well reached total depth, the company would frack the well per the fracking schedule, and the state gave the operators a year in which to complete a well once it was spud. But regardless, it was no longer confidential.

Some time ago, early this year, before the NDIC acted, the operators simply drilled to total depth and told the NDIC they were not going to complete the wells until some time in the future. I assume the operators were waiting to see if prices changed and, if not, would work with NDIC to take next step.

The NDIC took the next step, relaxed the standards, and the wells now come off the confidential list at the six-month mark, and if not completed, and if the operator does not plan to complete them within the year, they go to SI/NC (Shut In/Not Completed) status, or in shorthand, DUC -- Drill Uncompleted. If they plan to complete them or are in the process of completing (fracking) them at the time they come off the confidential list, they go to DRL status.

But in all cases, at the six month mark, they are no longer on the confidential list.

When the wells come off confidential list and go to SI/NC status, the file report now contains the sundry forms that are required.

To answer your question: No, the operators are not using SI/NC status to keep their well information confidential. When a well is put on SI/NC status I know everything about the well from the file report had the well been reported as active. The only thing missing is the frack data (and the IP) because the well has not yet been fracked. And, of course, if not completed, no test for an initial production number. I'm not even sure an IP is required by law (I see some wells with no IP reported) and there is no rule on how an IP must be calculated based on what little I know about following the Bakken since 2006 or thereabouts.

Second part of note: there is a difference between royalties getting paid and the confidential list. Once an operator starts selling the oil, that information must be made known to the state. That is not confidential. Even if they start selling it the month they drilled (never happens), they have to report production to the state. (There is a lag time - 30 - 90 days or something, which I've talked about before but have long forgotten the specifics. But that's simply an administrative fudge to give the operators time to get the paperwork in order, etc., etc.)

There may be typographical errors in this note. There may be factual errors. This is how I understand it; I could be wrong, but I bet I'm pretty close to right.

102. What do you mean by "choking back"? This comes from the posting of November 7, 2015.  At that link, see my comments. I have been using the phrase "choking back" incorrectly. I have been / had been using it to describe any situation in which it appeared the operator was purposely limiting production of oil from a given well for a particular reason, often associated with the price of oil. As a "broader" example, I would say that the oil and gas industry is "choking back" production in the state of North Dakota due to low prices. This is not the conventional use of the the phrase in the oil and gas industry, at least as far as I know. Obviously, wells are taken off-line for operational reasons (nearby fracking, putting in pumps, etc), and the operator is purposely taking the well off-line which will obviously limit oil production. I will probably consider using different terminology going forward but consider my use of "choking back" in the past as incorrect in most instances.

103. Active rigs: there is a discrepancy between what the NDIC reports and what Baker Hughes reports. See this post.
Posted by Bruce Oksol at 6:23 PM No comments:

This is an interesting article. I will come back to it later. Right now, off the net for awhile. Going biking.

Google vs Amazon / Apple.
Posted by Bruce Oksol at 9:55 AM No comments:

November 4, 2015: yes, this well has been fracked. The information can be found at FracFocus; the lag time might be 3 - 4 weeks, but certainly not the lag time we see here. Fracking details:

Original Post
Certainly this well is fracked, but if not, natural fracking results in a great well. The well shows great production. The NDIC data shows that it is SI/NC. No fracking data at the file report.

The NDIC scout ticket showing that this well is SI/NC:

Time to clean up the sidebar at the right; closing out the current polls.

What is primary reason for the recent rise in the price of WTI (up again today, over 2%):


Crude prices rose more than 2 percent on Tuesday as a rally in U.S. gasoline and diesel added support to oil markets already boosted by an industry strike in Brazil and force majeure for Libyan crude loadings.

This was a hard one: at what rate could DUCs be fracked during first six weeks of next turnaroud:
This was actually the most important to me, to help me better understand the Bakken. Why do you think BR plans to re-enter #20336?


The Italian-American automaker reported sales of about 196,000, led by the booming Jeep brand with a 33 percent increase. Sales were just over 170,000 a year ago.

It was Fiat Chrysler's strongest October since 2001, when most automakers offered zero percent financing in the aftermath of the Sept. 11, 2001 terrorist attacks.

Tweeting now: weekly rail traffic data -- analysts say things are getting worse, but the graph does not exactly support that assertion (a dynamic link). Four years (2012 - 2015, inclusive) are tracked; one can argue 2014 was the outlier; if so, 2015 looks no worse then previous years, perhaps better.


Prior to 2012 the only U.S. produced crude delivered by pipeline to Houston area refineries came from offshore Gulf of Mexico or onshore Louisiana fields. The majority of supplies were imports delivered by waterborne tanker. But in just three short years between 2012 and 2015, roughly 2 MMb/d of crude pipeline capacity was built or repurposed to deliver surging light shale crude production and heavy crude from Canada into the Houston area. Refiners have adapted quickly to take advantage of new sources of supply. But with much of the newly minted infrastructure underutilized, midstream companies still need to improve pipeline connectivity and storage accessibility to overcome area logistical challenges. Today we review RBN’s latest Drill Down report on Houston crude infrastructure – released today -- and announce RBN’s new infrastructure database and mapping system, called MIDI.

In 2011 average waterborne imports to Houston area ports were 1.7 MMb/d – enough to supply more than 70% of local refinery needs. Since April 2012 when Phase 1 of the Seaway pipeline reversal (150 Mb/d) came online to deliver crude from the Midwest Cushing, OK trading hub to Houston, that position has been largely reversed as multiple new pipelines have come online delivering domestic and Canadian crude to the Houston area – pushing out imports in the process. In July 2015 crude delivered by pipelines developed since 2012 accounted for about 55% of Houston supply and waterborne imports had dwindled to 0.8 MMb/d. Our latest Drill Down report – available exclusively to Backstage Pass subscribers provides detailed analysis of the changing crude supply/demand balance for 9 refineries and two condensate splitters in the Houston area that between them consume about 2.4 MMb/d.

Posted by Bruce Oksol at 6:37 AM No comments: