Flaring
Statoil may have a solution to flaring

Miscellaneous
Price at the pump highest in six years
Posted by Bruce Oksol at 10:45 PM No comments:

"Bakken Well Efficiency Has Topped Out And The Only Offset Is The Exponentially Rising Number Of Wells" -- ZeroHedge.Com

A few days ago (or maybe it was yesterday), Don sent me a link to an Investor Village suggesting that "recent Bakken shale dynamics shows (sic) that well efficiency has topped out and the only offset is the exponentially rising number of wells." If that link breaks, here's the link to the original post at ZeroHedge.

That got the headline but there was much more to the story. The article validates very clearly that the Bakken* literally saved the US economy.

Perhaps I'll come back to that much bigger story some day, but the linked article pretty much says it all.

However, the argument that "well efficiency has topped out in the Bakken" is interesting. For argument's sake, let's agree to agree that the petroleum engineers and drillers have in four or five short years have learned all the secrets there are to learn about the Bakken and drilling to have maxed out well efficiency in western North Dakota. That's pretty impressive: another reminder how incredible US engineers and drillers really are. As recently as 2007, it seemed there were very few folks who believed in the Bakken. Even as recently as 2008 the USGS severely underestimated the potential of the Bakken.

So, agreeing to agree that well efficiency has topped out and all that's left is to drill more wells in the Bakken, where does that lead us? Do operators plan to drill more wells per section in the Bakken? Regular readers recall the most recent NDIC agenda for July in which Continental Resources will be looking to drill 56 wells in one 2560-acre spacing unit. To some, that might simply be "pie in the sky." Where's the meat?

Well, here's the meat. A reader was kind enough to send three screen shots of a recent case in which EOG is planning, very, very specifically, to place 64 wells in one 2560-acre spacing unit. This can get confusing, be careful. I may misunderstand it, but I'm pretty sure this statement is accurate: each well is its own entity, its own birthright, its own parameters. Each well is "assigned" to a specific spacing unit and that does not change. When you see the screen shot and see 64 wells in one 2560-acre spacing unit, note that not all wells are spaced for 2560 acres (at least as I understand it). I have not looked at the existing wells and do not know their spacing (I will do that later, but I am on my way out to spend some time with three granddaughters) but I assume they were drilled before the new 2560-acre spacing was approved. Be that as it may, in the screenshot, note that EOG is looking to have 64 wells in these four sections.

Any mineral owner that owns even one mineral acre in any of those four sections will receive royalties from as many as 56 wells with 2560-acre spacing. 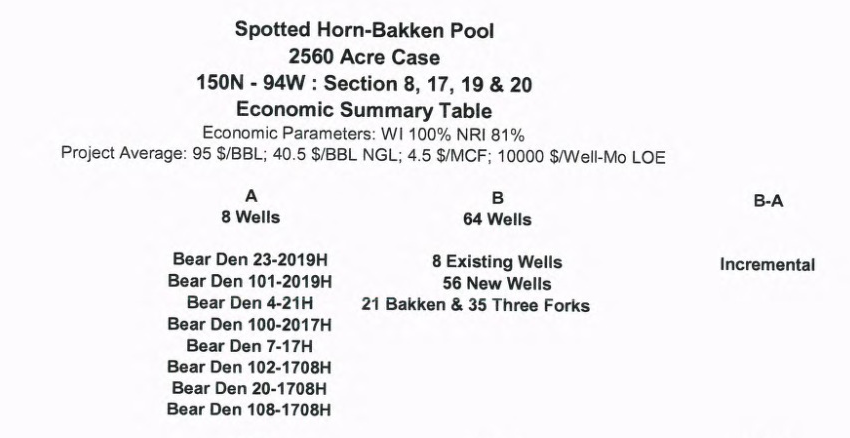 Another big "thank you" to the reader for sending me the screen shots.

*Regular readers know that my reference to the "Bakken" has at least three meanings: