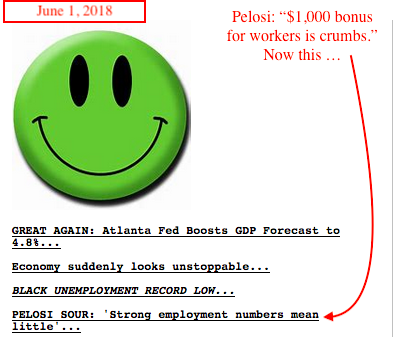 
The GDPNow model estimate for real GDP growth (seasonally adjusted annual rate) in the second quarter of 2018 is 4.8 percent on June 1, up from 4.7 percent on May 31.

The nowcasts for second-quarter real consumer spending growth and second-quarter real private fixed investment growth increased from 3.4 percent and 4.6 percent, respectively, to 3.5 percent and 5.4 percent, respectively, after the employment report from the U.S. Bureau of Labor Statistics, the construction spending report from the U.S. Census Bureau, and the Manufacturing ISM Report On Business from the Institute for Supply Management were released this morning.


Seven new permits:
And that was all.
Posted by Bruce Oksol at 7:26 PM No comments:

T+1: "everyone" says a trade war will kill the Chinese companies and that will affect US investors. Alibaba (BABA) surged over $6/share today.

Jobs: I think it was about a year ago that Obama apologists said that Trump's policies would kill the labor market. Every month pundits have wondered where all these workers are coming from. Every month, another 200,000 jobs are added. Where are all these workers coming from? Today, expectations were for 190,000 new jobs which would have been an incredible report but it was even better than that: 230,000 new jobs. Unemployment among African-Americans at all-time low. I believe. At least since the days of Thomas Jefferson, I suppose. I don't know, just saying. But labor force participation remains flat at 62%. I would love to see an analysis why the US can keep adding 200,000 new jobs each month -- month after month -- and pundits about a year ago started saying this was impossible -- where are all these workers coming from? And yet no analysis. Lots of talk about a Trump tweet, but no analysis. Talk about lazy journalists or business journalists with no intellectual curiosity.

Jobs: by the way, there is an explanation why 200,000 jobs are being filled each month; I've talked about it before.

Off the net: I'll be off the net for awhile. Family commitments. Mostly swimming with Sophia. Close to one hundred degrees here in north Texas.
Posted by Bruce Oksol at 10:18 AM No comments:

The US hit an all-time crude oil production record.

That record was touched on briefly yesterday by some news outlet. I looked for it this morning, but couldn't find it. A google search was not helpful (see below). I guess that's another nail in the coffin of the Hubbert Peak Oil Theory.
Posted by Bruce Oksol at 9:23 AM No comments:

Later, 9:33 p.m. CDT: see notes on the jobs report below, in the original post. Not one mainstream media outlet pointed this out in their ledes (or anywhere in the story, that I could find) and certainly no media outlet had this headline or banner. But Drudge did:

The Drudge link takes you to the Washington Examiner.

T+1: first full day that steel and aluminum tariffs have been imposed on the EU, Canada, and Mexico. CNBC anchors, contributors, and analysts yesterday afternoon went nuts over this -- how this would adversely affect the US stock market. So, where are we today? The Dow is up 206 points. It would be up another eight hundred points except for the fact that the May jobs report was so incredibly incredible that it all but guarantees a fifth "Fed" rate hike this year -- probably all before November.

Trudeau: I was fortunate enough (and I use that phrase loosely) to catch the Trudeau press conference when he announced "retaliatory" steps against Trump's tariffs. Stealing a line from The Big Lebowski, "he was way out of his element."

Let's take a look at how the jobs report was reported:

The American economy roared into overdrive last month, delivering the strongest job gains since February. The report underscored other recent signs of strength, like robust personal income and spending data reported earlier this week. Indeed, by just about any measure, the labor market is very healthy. The unemployment rate for May was at lows not seen since the heady days of the dot-com bubble.

Policymakers at the Federal Reserve are almost certain to raise interest rates when they meet this month, and have said they expect at least one more increase later this year, most likely in September or December. The stately pace of the Fed’s campaign to tighten monetary policy has reassured Wall Street, which has been edgy lately over trade tensions and the prospect of a populist-style government in Italy.

June 2, 2018: see story below in which a writer suggested Kinder Morgan got a $7.4 billion payout for a $550,000 investment. A reader did some of his/her own analysis, after "smelling a rat." This is the reader's entire reply, which is probably a whole closer to the truth than Nick Cunningham's analysis. Remember, he has the same access to information as the rest of us. LOL.

So, there's a May 30 article by Nick Cunningham for OilPrice, which says that Kinder Morgan had only paid $550 million for the existing TransMountain pipeline back in 2007.  His theory was that Trudeau overpaid in the recent taxpayer-funded purchase.  And I'm sure that'll be widely quoted.

I double checked the DAPL numbers, and the original estimate was about $4 billion.  That's close to the price Trudeau paid.  So, then I grabbed my trusty bar room napkin -
So, I had to check to see what the original deal was.  It was 2005, not 2007 - and his numbers were way off.  It was not a stand-alone acquisition, so there's no telling how it was treated for accounting purposes.  (Especially since I know nothing about Canadian accounting).  I can easily imagine that since the existing TM pipeline was 50 years old, that it may have had a much lower depreciated book value.

Anyway - my point is that Trudeau didn't pay a much different price for TM than what DAPL was expected to cost.  KM tossed in the existing pipeline, terminal, etc. and that would increase the value compared to DAPL's barebones pipeline number.  Obviously, there's still an ongoing construction cost for TM, but my understanding is that the pipe is bought and paid for - so it'll just be labor and legal fees.  (;>)  Some of the high-dollar contracting/labor/consulting may also be prepaid - not unusual for big construction projects

The following article is old enough that the TM pipeline isn't really named as such, but it has to be the same critter, because it's the only pipe between Alberta and BC.

I don't have a horse in this race, but the bad reporting on DAPL really raised my hackles - and it looks like there's more of the same going on in Canada.

Can't wait to spend the money: North Dakota floats idea of spending Legacy Fund money. You know, that Fund that was put in an Algore lockbox.

Trans Mountain Pipeline Expansion: tea leaves suggest this will not go well even now, owned by the Canadian taxpayer, but the word on the street is that Kinder Morgan did incredibly well.

Kinder Morgan bought the project for $550,000 some years ago, and although the final numbers are yet to be determined, it appears Kinder Morgan got a windfall of somewhere between $4.7 billion and $7.4 billion. Off the top of my head; can't recall for sure. Easily found for those interested. I will come back to it later. Why would Justin Trudeau pay so much for one pipeline? -- It would n't even add much to the overall Canadian economy, nor would it really do much for the Canadian sands. On paper, it makes no sense. At least that's what some are saying. If I can find the link again I will post it.

But this is why:


First it was the Keystone XL. Then Enbridge Line 3. Energy East. Then Trans Mountain Pipeline.  In an earlier post I had mentioned three of those four. I had completely forgotten "Energy East," perhaps the granddaddy of them all.


The Energy East pipeline was a proposed oil pipeline in Canada. It would deliver diluted bitumen from Western Canada and North Western United States to Eastern Canada, from receipt points in Alberta, Saskatchewan and North Dakota to refineries and port terminals in New Brunswick and possibly Quebec.

The TC PipeLines project would convert about 3,000 kilometres of natural gas pipeline, which currently carries natural gas from Alberta to the Ontario-Quebec border, to diluted bitumen transportation. New pipeline, pump stations, and tank facilities would also be constructed.

The CA$12 billion pipeline would be the longest in North America when complete. The project was announced publicly on August 1, 2013, while the Keystone XL pipeline proposal was being debated. In October 2014, TransCanada Pipelines filed its formal project application with the National Energy Board.

At the same time a number of groups announced their intention to oppose the pipeline.[2] TransCanada cancelled the project on October 5, 2017.

It was obvious Trudeau was never to prevail against faux environmentalists in eastern Canada, but if he couldn't even get a win in western Canada, he could see the end of Canada's fossil fuel industry. Hyperbole? Sure. Possibility? Sure.

It looks like greenfield pipelines in Canada and the US have little chance of success unless they do not cross state lines, provincial lines, or international boundaries.

But Kinder Morgan did just fine, thank you. They get paid regardless. And yes, that's not a typo. They "get" paid, regardless. They got 30-year commitments from shippers to pay them even if the pipeline did not get built.

Disclaimer: this is all based on articles I've read over the past couple of days. It's only what I recall and there will be many factual errors. None of them on purpose. Once I find the links again, if I'm interested in doing so, I will update / correct this post.


RBN Energy: rising Permian NGL production drives the need for new pipes. I'm so glad I followed the Bakken as closely as I did starting from the very beginning. The Permian boom is following exactly what we saw in the Bakken boom. For investors, God is giving us a second chance to get it right. LOL.


With Permian production of natural gas liquids (NGLs) on the rise and available pipeline capacity shrinking, midstream companies are in advanced stages of developing projects that — if built on their current schedules — would roughly double the 1.2-MMb/d of effective NGL takeaway capacity in place today within the next 18 months or so. Much of the planned capacity is backed by long-term commitments from Permian producers anticipating continued growth in production of crude and NGL-rich associated gas, especially in the play’s Delaware Basin. Still, the pace of NGL pipeline projects in the Permian begs the question, is all that incremental capacity needed? Today, we continue our series on the NGL takeaway challenges facing producers and processors in cowboy country.

US jobs, May, 2018, continues to break all-time records. Some numbers the best ever -- ever since the government started tracking certain data. Overall unemployment ticks down. Over 200,000 jobs added. U-6 -- "real unemploymnet" -- lowest since, was it 2001? I forget what CNBC said. We'll come back to this later. I only listened to the report and then the 30-seconds of speechlessness by the CNBC contributor before I had to get on my bike, and get up to the new homeless shelter on William B. Tate, near downtown Grapevine.

Jobs link to follow.
Posted by Bruce Oksol at 7:58 AM No comments: