A shale comeback in the cards for 2022? Link to David Messler, another of the handful of columnists following the Bakken that is credible and interesting.

Masking: Apple once again requiring masking at all locations in the US.

WTI: slips below $70. Someone remarked we've flipped from backwardation to contango this week. I do not know.

Note: Brandon administration says "banning oil exports is off the table." And Secretary of Energy tells oil companies to "drill, baby, drill." When asked about the rig count her reply: "I don't have the numbers in front of me."

Tesla and the infamous "McNeally Quote": link here. It doesn't mean a thing to me; I have no dog in this fight, but the "history" is interesting, and worth it to have in the archives for the grandchildren (for some odd reason, I suppose).

In early December, natural gas production in the Permian has been averaging a record 14.2 Bcf/d, a gain of 1 Bcf/d in only six months. That rapid pace of growth is putting pressure on every aspect of midstream infrastructure — gas gathering systems, processing plants, and takeaway pipelines — and resulting in a variety of efforts aimed at ensuring there will be sufficient capacity in place to support the increasing gas volumes being produced. New gas-gathering mileage is being added, some new processing plants are being built, and at least a couple of new large-diameter pipelines from the Permian to the Gulf Coast are being considered. However, reflecting the midstream sector’s financial discipline, there’s also a big push to make fuller use of existing assets, in some cases by relocating processing plants, compressors, and other assets to where they are needed most. In today’s RBN blog, we discuss the latest gas-related infrastructure developments in the Permian’s Midland and Delaware basins.

As we said a few months ago, Permian natural gas production has roughly doubled in the past four years, spurring the build-out of billions of dollars in gas-related assets. These projects include innumerable miles of new gathering pipeline, more than new 50 gas processing plants, and a number of new takeaway pipelines, most recently the 2.1-Bcf/d Permian Highway Pipeline and the 2-Bcf/d Whistler Pipeline, which started up in January and July of this year, respectively.

Later, 10:06 p.m. CT: this is simply a coincidence. I posted the note below, then going through my twitter feed one last time for the day, I came across this: 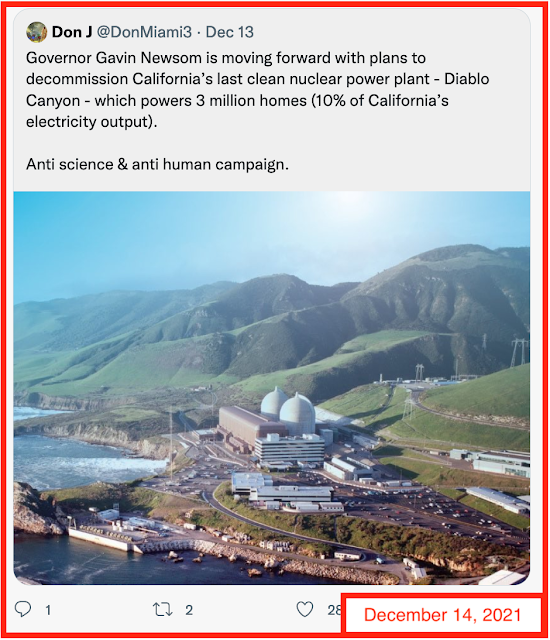 It seems the "big" reason that Elon Musk / Tesla left California had to do with taxes and "politics."

But one wonders to what extent accessible, dependable, inexpensive, dispatchable electricity played a role.

I was reminded of that today when a reader mentioned in passing that PG&E's plans to shut down Diablo Canyon nuclear plant beginning in 2024 are still on track.

This nuclear plant is the largest single power station in the state.

A 2021 report from researchers at MIT and Stanford states that keeping Diablo Canyon running until 2035 would reduce the state's carbon emissions from electricity generation by 11% every year, save the state a cumulative $2.6 billion, and improve the reliability of the grid.

They state that three factors have changed since the 2018 decision to close the plant: the state passed a new law (sb100) which requires 100% emissions-free electricity generation by 2045, the whole western US region is in a continuing mega-drought (limiting hydroelectric generation), and demand for electricity has outpaced supply, especially during heatwaves.

They also stated that keeping Diablo operating until 2045 would save the state a cumulative $21 billion.

The best comparison I have is ISO New England where nuclear energy still plays a significant role, providing about 25% of electricity demand.

Only in American could this be "intimidating." I can't make this stuff up. 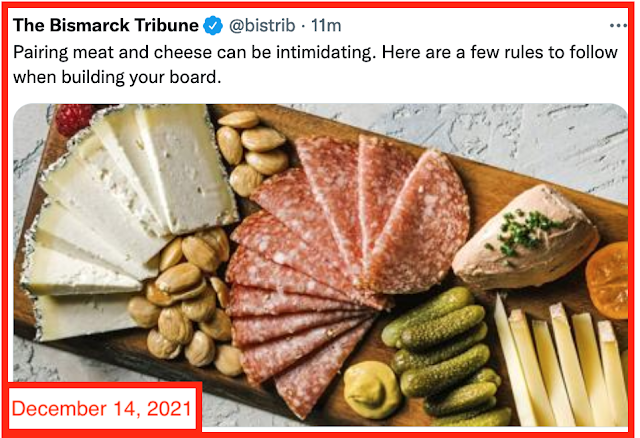 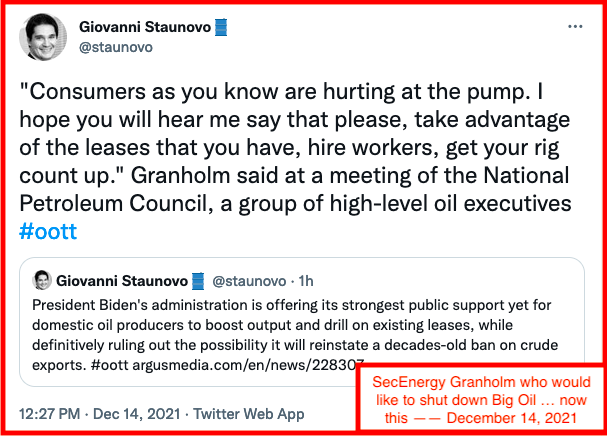 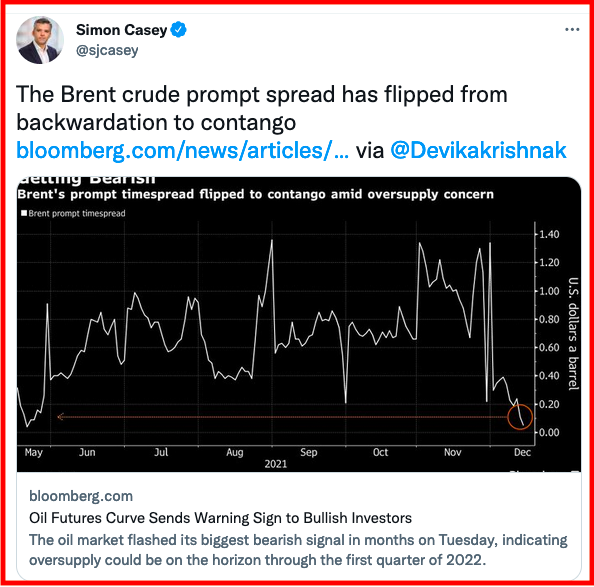 This clearly says in plain English:

Covid: Biggest Rise In Life-Insurance Payouts In A Century -- December, 2021

It seems there were reports last  year that although Covid-19-related deaths were huge, the overall "excess" deaths in 2020 were flat or even possibly lower than previous years.

Here's the data. Or least what's being reported.

A study analyzing US mortality in March-July 2020 reported a 20% increase in excess deaths, only partly explained by COVID-19. Surges in excess deaths varied in timing and duration across states and were accompanied by increased mortality from non–COVID-19 causes. This study updates the analysis for the remainder of 2020.

Apparently for gasoline, that jump in price was "transitory." The price of gasoline is already falling. LOL. 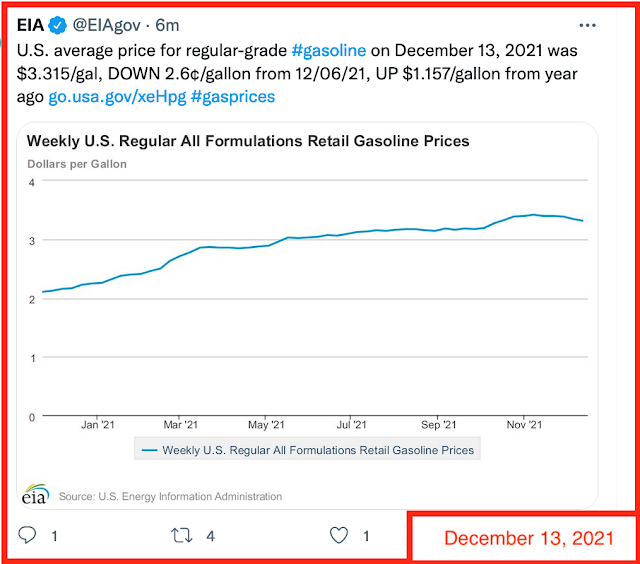 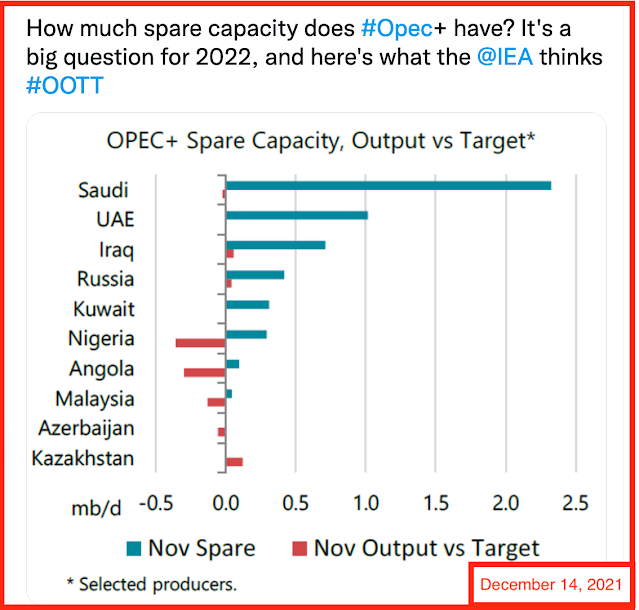 Hotel California, The Eagles
Posted by Bruce Oksol at 7:19 AM No comments:

Reminder: NDSU, SDSU, Montana State and some other team in the semifinals this Friday, Saturday for college football championship.

Rumor: New Zealand to market combo pack just in time for Christmas -- the new Pfizer capsule along with Viagra. My hunch: they throw in a Trojan for marketing.

Speaking of dividends: yesterday we noted UNP and TRN raised their dividends. It must have been a big story. See Zacks and here.

Contrary view: oil patch supply will catch up with demand in 2022 -- S&P Global Platts -- link to Charles Kennedy -- one of the better columnists.

There’s been a lot of talk lately about “green” and “blue” hydrogen becoming increasingly important players in the world’s lower-carbon energy future. Green and blue ammonia too, given that ammonia, with its high hydrogen content, is an efficient “carrier” of hydrogen when it needs to be delivered by ship, railcar, or truck. Also, ammonia itself — like hydrogen — can be used to power fuel cells and ammonia-combustion technology is being developed to use fuel ammonia at power plants.

But for these low- or zero-carbon energy products to be adopted at a global scale, new infrastructure will need to be built, not only to enable their production and consumption but to transport them to where they’ll be consumed. Enter the just-finished ammonia terminal that Royal Vopak and Moda Midstream jointly developed at a prime site along the Houston Ship Channel. In today’s RBN blog, we discuss the greenfield facility and its prospective role as a major import/export hub for ammonia.

Global decarbonization has become a frequent topic in our blogs. It’s not that we think crude oil, natural gas, and NGLs will be fading from view anytime soon — or in our lifetime, for that matter. But we acknowledge the pressure to reduce greenhouse gas (GHG) emissions as quickly as possible, and we believe that while the energy industry — all of it, from producers and midstreamers to refiners and power producers — will need to undergo a major transformation, change presents opportunity and if we’re smart we’ll recognize it and grab it.

Posted by Bruce Oksol at 6:32 AM No comments: