Oil-and-gas company SandRidge Energy Inc. is terminating its agreement to buy Bonanza Creek Energy Inc., after getting pushback from some of its biggest stakeholders, including activist investor Carl Icahn.

“After consultation with SandRidge’s largest shareholders, it became clear that the company would not receive approval for the transaction,” SandRidge said Thursday.

Mr. Icahn, the company’s biggest shareholder with a 13.5% stake, and other SandRidge investors had taken issue with the cash-and-stock deal, which was valued at about $750 million when it was announced in November. Investors said the deal made little sense and was too costly, especially because they believed shares of SandRidge were undervalued.

The data has just been posted. It looks like Prince Salman was able to extract a significant amount of cash from his princes. Link here: 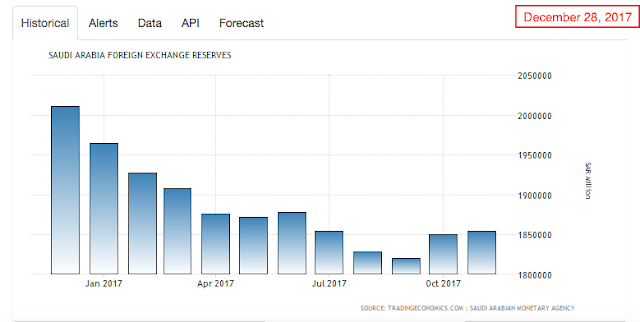 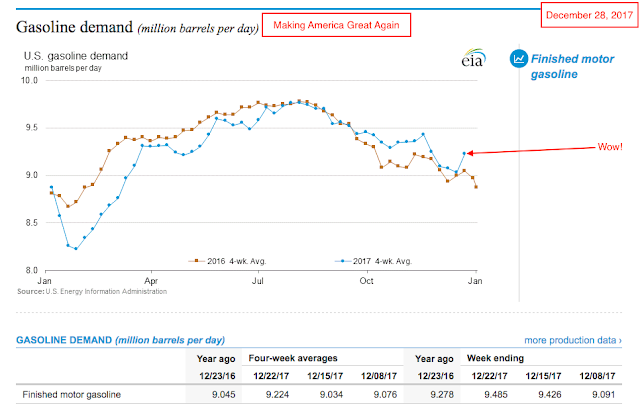 The market and economic indicators: Chicago PMI at six-and-a-half-year high. 67.6 vs 62.5 consensus. Stock market to close at 71st record high for the NYSE -- this has never happened before. From the website:


The ISM-Chicago Business Survey, a regional view of the national economy, is a time-tested, market-moving report. The CHICAGO Report is released to the public 8:45 a.m. CT on the last working day each month. The Chicago Business Barometer, summarizing current business activity, also is known as Chicago Purchasing Manager Index or Chicago PMI. The Barometer is considered to be a leading indicator of the USA economy.

Again, this begs the question: what was President Obama doing for eight years?


From The Wall Street Journal:

A glut of gas from U.S. shale fields is fueling a power-plant construction boom in several Northeastern states, despite fierce competition that has caused wholesale electricity prices to plummet.

The key for electricity producers is location. Having access to transmission lines to move megawatts to market is vital; but in addition by building close to natural-gas reserves, power producers can more easily access cheap fuel supplies.

In Pennsylvania and Ohio, which sit above the prolific Marcellus Shale formation, companies including Invenergy LLC and Calpine Corp. CPN 0.07% are building gas-fired power plants capable of generating a combined 8.6 gigawatts when they come online between now and 2020, according to federal data.

That output, which is enough to power up to 8.6 million homes, would require about 1.5 billion cubic feet of gas a day—roughly the equivalent of the daily flow through a major pipeline.The build-out comes as American shale drillers continue pumping so much gas that the price of the fuel has plunged from highs of over $13 per million British thermal units in 2008 to less than $3 per million BTUs today.

“The economics are compelling for gas-fired power,” said Andrew Slaughter, head of the Deloitte Center for Energy Solutions.

The power is bound for PJM Interconnection LLC, a power grid that serves some or all of 13 states, including Illinois, Michigan and New Jersey as well as Ohio and Pennsylvania. Competition among wholesale power producers in the market served by PJM—which stands for Pennsylvania, Jersey, Maryland—has become so fierce that a megawatt hour traded for $29.23 last year, the lowest level since 1999, as far back as the grid’s independent market monitor tracks prices.

This story has been told and re-told many times the past several weeks. Apparently once one writer sees an interesting article, other writers pick up on it and re-write the same story. From Bloomberg: all that new shale oil may not be enough as big discoveries drop.


Discoveries of new reserves this year were the fewest on record and replaced just 11 percent of what was produced, according to a Dec. 21 report by consultant Rystad Energy. While shale wells are creating a glut now, without more investment in bigger, conventional supply, the world may see output deficits as soon as 2019, according to Canadian producer Suncor Energy Inc.

“Tight rock is not going to solve the global supply-demand issue,” said Adam Waterous, chief executive officer at the Calgary-based Waterous Energy Fund, which invests as much as C$400 million ($265 million). “Its going to take a long time for those mega-projects to come back on.”

Hydraulic-fracturing technology made it possible to squeeze crude from tight-rock formations and turned the U.S. into the world’s top producer. But it also sent the global benchmark for oil tumbling from $115 a barrel in 2014 to less than $55 in October. That’s eroded the incentive for companies to invest billions of dollars on new reserves that take years to develop but can produce for decades.

Oil prices would need to climb to $80 and remain at that level for two years to justify the costly deep-water projects off the coasts of West Africa or Brazil, Waterous said. And even then, it could take a decade before crude from those investments would arrive on the market, he said. Prices topped $66 this week.

Personally, I find these stories tedious. One or two stories, fine. A half-dozen stories in as many days? Tedious.

By the way, a reminder in case you missed it. The biggest oil discovery in decades was made by an Exxon-Hess joint venture off the coast of Guyana in 2016. Here is an update of that discovery from Reuters, dated June 16, 2017, earlier this year.
BP and Reliance Industries also announced (this same week) that they would spend $6 billion to develop natural gas reserves off the Indian coast

To access a free PDF copy of this report:
For complete listing of NDSG publications, etc. click here.

Today, Central Time:
Wow, that's a sad commentary on where my life is. LOL.

But I did watch Tinker, Tailor, Soldier, Spy again (for the umpteenth time) last night, and I saw something I had not seen before. A really brilliant bit of writing and filming.
Posted by Bruce Oksol at 12:17 PM No comments:


Re-balancing projections are based on returning to 350 million bbls in storage (not including SPR) and starting from May 3, 2017. If the re-balancing were to go to 400 million bbls then re-balancing would project out to only eleven (11) more weeks.
Posted by Bruce Oksol at 11:40 AM No comments:

From the January, 2018, NDIC hearing dockets:
The graphic: 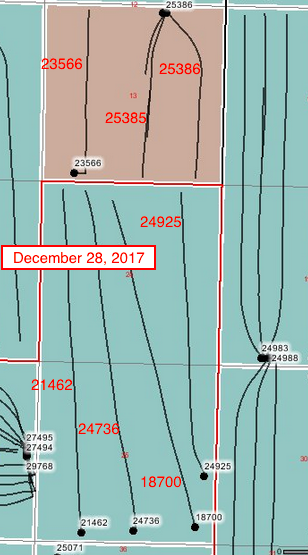 The existing wells:
Comments: The existing wells are not good wells, and yet they are in the sweet spot of the Bakken. In addition, Whiting is going to significantly increase the number of wells in these two drilling units (one, a 640-acre unit; the other, a 1280-acre unit). One well is still flowing (at least according to NDIC) even though it was drilled four years ago. It will be very interesting to see how these new wells perform.
Posted by Bruce Oksol at 8:05 AM No comments: