For me, the most important post of the past week may have been this one.

Nationally, this was the most important story -- at least for American drivers: the average nationwide gasoline price is now at the lowest for this point of the year since 2005. For a nation of non-EV drivers, I just can't imagine a more incredible turnaround -- since 2005. That was before Barack Obama was President Obama. Wow.

The most interesting story in the Bakken might have been posted today. Kraken Operating reported three incredible DUCs -- leases/permits the company bought from CLR, and I think these are better wells than what CLR was getting. This is a good area in the Bakken but not seen as one of the best areas and yet the IPs were incredible.

First World Problem -- Having Enough Cash For A Ringside Seat To See A Basketball Game -- June 9, 2017 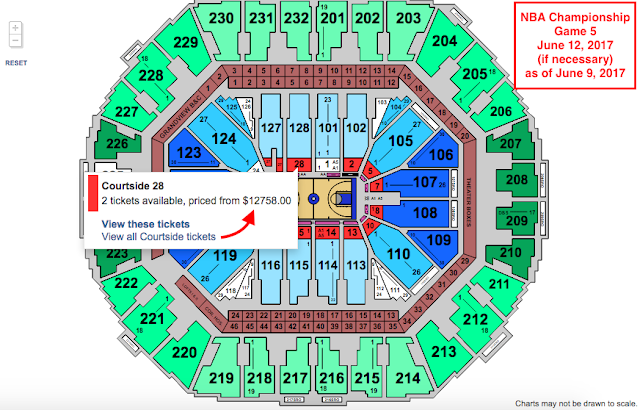 New York Times: drivers head into summer with a gift at the fuel pump.

Gee, I wonder why that surge in US crude oil inventories? Tell us again that Washington will ban fracking. Peak oil? What peak oil? It's interesting to note that the writer gives no credit to the oil and gas sector for creating this situation. The writer actually wrote this:


But whatever lies behind the dividend at the pump, drivers are happy to have it.

"Whatever lies behind" low prices? Wow. Shallow reporting at the NY Times.

And we can't forget Jimmy Carter, who was ready to mandate mandatory gasoline rationing. This is simply pathetic:


Another doofus
Posted by Bruce Oksol at 8:49 PM No comments:


Four new permits:
Three producing wells (DUCs) completed:
I track Bakken operators here. This is what I had for Kraken Operating as of this date:

For folks interested in re-fracks and effect on neighboring wells with nearby re-fracks, a reader has provided a very interesting update: see this post.
Posted by Bruce Oksol at 3:54 PM No comments:

So, we'll see Monday where AAPL heads. Will folks "buy on the dip" or is there something that has spooked the technology market and AAPL will continue to fall? A 5% drop in share price is a fairly significant drop. Is AAPL likely to correct (go down) 10 - 20%? It will be interesting to follow.

Three AAPL graphs (one day, one year, and ten year -- not quite the whole time-span is shown for each graph due to the way I took the screen shot).


The GDPNow model forecast for real GDP growth (seasonally adjusted annual rate) in the second quarter of 2017 is 3.0 percent on June 9, down from 3.4 percent on June 2.

The forecast for second-quarter real GDP growth fell from 3.4 percent to 3.1 percent on June 5 after the U.S. Census Bureau's manufacturing report and the incorporation of motor vehicle sales estimates released by the U.S. Bureau of Economic Analysis on the prior business day.

It Never Quits -- Now, Another Huge Power Plant To Be Built In Wisconsin -- Will Meet MN Carbon Mandates -- June 9, 2017

A huge thanks to a reader for sending me this link and pointing out the reason why Minnesota Power built this plant in Wisconsin.
But, possibly, this is the big reason Superior, WI, was chosen as the site:


"If everyone just built the green stuff, that’s when we could find ourselves with reliability that could be very precarious,” Pierce said, adding that the utility’s biggest customers — taconite plants on the Iron Range — depend on the grid 24/7. “I can’t emphasize enough the importance of our natural resource-based economy and the need for reliability and affordability.”

Power generation from natural gas is easier to control than coal, on top of being less carbon-intensive. Natural gas prices have also been at historically low levels in recent years, though growing demand from new and proposed power plants could change that.

Later, 3:57 p.m. Central Time: was the 125-point NASDAQ sell-off a big deal? Apparently not: Drudge Report did not link it; I would have expected a banner headline, and possibly a rotating beacon!

Market: it looks like another nice day for the market. Although, if it plays out as it has historically seems to play out, futures will be green, followed by red by mid-morning, and then flat during most of the day, to remain slightly green, maybe even going red by the end of the day.

Barron's: having said that (this is not an investments site), Barron's, in the current issue, has a list of six publicly-traded companies paying nice dividends. Any of the six are hard to ignore, but one company is particularly interesting. I don't recall all six -- I read the paper at the library yesterday -- but it included Becton Dickinson, J&J, Royal Dutch Shell.

Another trifecta: if futures hold, all three indices could hit new records in June:

Leaks: of many big stories not being discussed by mainstream media regarding the comedy hour was the fact that the nation's FBI director purposely leaked memos of a private conversation with the president simply to force the appointment of a special counsel. It spoke volumes that the four national intelligence leaders the previous day declined to follow suit even under increased pressure from the US Senate. Interestingly enough, CNBC journalist, Pete Williams, admits that he does not know the definition of a "leak" suggesting that he does not necessarily consider what Comey did was a "leak."

Comedy hour: many, many story lines from the session. But perhaps for another day.

Miss: analysts this morning are suggesting that Theresa May completely botched this whole thing, starting with calling for a "snap" election that was clearly not needed at the time.

And then this statement: as shocking as those statistics are/were, "to say that this constituency does not look favorably on the Democratic Party fails to capture the scope of their disenchantment.

A chart at the link illustrates this discontent, of Obama-to-Trump voters, a solid majority, 77% think:
But note this, although it was essentially a wash, the percent of respondents who said:
Geoff Garin of Gari-Hart-Yang Research Group:
Then this, 'if the Priorities analysis is bleak, the 13 American Prospect essays are even more so.

Later: "Trump's brand of populism -- and more importantly, that of working-class whites -- differs in important ways from the populism of Bernie Sanders and Elizabeth Warren."

And, of course, the usual meme concludes the op-ed:


For all the harm he has done, continues to do and proposed to do, Trump has successfully forced Democrats to begin to examine the party's neglected liabilities, the widespread resentment of its elites and the frail loyalty of its supporters.


Apache Corp. posted the largest operating profit in the peer group during the first quarter of 2017 at $744 million, compared with $37 million for full-year 2016, while generating $1.4 billion in cash flow. Higher prices and lower lease operating costs led to significant margin expansion across all of the company’s major regions. Compared with first-quarter 2016 results, margins went from $21/boe to $33/boe for Apache’s operations in Egypt, $17/boe to $37/boe for the North Sea, $11/boe to $20/boe for the Permian and $5/boe to $13/boe in the rest of the company’s North American operations. After cutting capital expenditures by 83% in 2014-16, Apache is taking advantage of its dramatic turnaround to boost investment from $1.7 billion to $3.1 billion, with the increase slated to fund 14%-21% output growth from its Permian properties, including its new Alpine High play.

EOG Resources posted a $232 million operating profit in the first quarter of 2017, the second-largest quarterly profit in our study group, and EOG joined Apache as the only producers that generated more than $1 billion in cash flow. EOG produced 571 Mboe/d, including a record 316 Mb/d of crude oil. In the first quarter, EOG received more than $10/boe over its 2016 realized prices, or $36.98/boe. Lifting costs were $11.73/boe in the first quarter, up nearly $2/boe from its 2016 results, which the company said resulted from the divestment of lower-cost natural gas-weighted properties. Reductions in DD&A expense helped offset the rise in lifting costs, falling 4.5% to $15.88/boe. In contrast to the industry trend, impairments increased from $3/boe in 2016 to $3.73/boe in the first quarter of 2017, which was also divestiture-related.

Disclaimer: this is not an investment site. Do not make any financial, investment, job, travel, or relationship decisions based on what you read here or what you think you may have read here.
Posted by Bruce Oksol at 7:53 AM No comments: