Updates
June 28, 2015: Second one shot, injured, critical in hospital although picture of him after his capture suggests he looks pretty good.

It looks like they got 'em cornered. They fought the law and the law won. Saranac Lake, New York, within last 24 hours. Mountain View, Owl's Head, NY.


I Fought The Law and The Law Won, Bobby Fuller Four


Or is it just a matter of time?


It's Just a Matter of Time, Randy Travis
Posted by Bruce Oksol at 11:22 PM No comments:

When It Rains, It Pours. This Is Not An Investment Site. Do Not Make Any Investment Or Financial Decisions Based On Anything You Read Here Or Think You May Have Read Here -- June 21, 2015

Petroleum engineer provides his analysis of major E&P companies in a low-oil-price environment.


With the exception of HK and EOX, I remain bullish on all these stocks. Based on the increasing debt and capital intensive shale plays, I believe there will be better entry points to come. These entry points will likely show themselves post Q2 and possibly Q3. Since, Q3 losses will bring the quarterly loss reports to a year's worth (Q4 2014 through Q3 2015) for most companies, which in turn will bring bigger discounts.

In the meantime, I recommend increasing your holdings little at a time until you find your comfortable entry price.

The Los Angeles Times is reporting (if the link breaks, this is not a joke; serious as a heart attack, as they say):


Not every home in Los Angeles County goes for $1 million-plus. Here's a look at a few single-family homes around L.A. that are available in the low $400,000s. 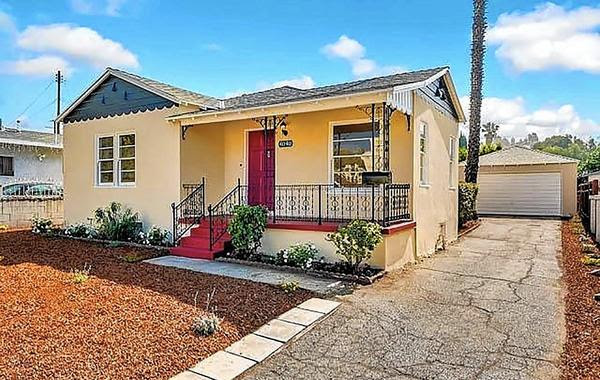 I'm going for the hardwood floors as a feature, and the corrugate metal siding as ... a conversation piece.
Posted by Bruce Oksol at 8:44 PM No comments:

This Is Not An Investment Site; Do Not Make Any Investment Or Financial Decisions Based On What You Read Here Or Think You May Have Read Here -- June 21, 2015


Energy Transfer Partners, a master limited partnership owning energy assets and is also the parent of Sunoco, acquired Regency Energy Partners on April 30. The companies announced the complicated merger agreement on Jan. 26, 2015 in which an "indirect subsidiary of ETP, [would merge] with and into Regency, with Regency surviving the merger as a wholly-owned subsidiary of ETP." The transaction was completed on April 30.


The approach was from pipeline magnate Kelcy Warren’s Energy Transfer Equity LP, according to the people, who asked not to be named because the information is private.

Are "things" starting to break open in the energy sector?

First, the news this past week: SRE and a MLP. A big story but not as big as what was just announced. A huge "thank you" to a reader for catching this: $50 billion bid for Williams?

WMB, enterprise value, about $60 billion. The big question: who has that kind of money? Warren Buffett likes pipelines. WMB is headquarterd in OK, not too far from Omaha. Warren bought BNI for $44 billion. He likes huge CAPEX companies that pay nicely over the years. Warren knows energy won't get any cheaper in his lifetime. This could be his swan song. Warren knows a good deal when he sees one. That much pipeline brings a lot of other stuff. He likes being in the news and this would certainly be in the news. [Update, 7:41 p.m.: I'm wrong on this one. It's not Warren Buffett. Buffett doesn't do unsolicited bids. If this was Buffett's deal, it would have been a done deal, and announced as a done deal. So, scratch Buffett.]

Other than that, it's some a) Wall Street (hedge) fund (see below); or, b) a group of investors/funds doing something outlandish.

Can't wait for the screenshot Monday.


The two activist hedge funds looking to spur change at the Williams Companies disclosed on Friday that they have raised their collective stake in the gas pipeline company and have hired an investment banker to aid them in their campaign.

The firms, Corvex Management and Soroban Capital Partners, said in a regulatory filing that they have increased their economic interest in Williams to just under 10 percent of the company’s value, up from an initial 5.3 percent.

Includes a video for making / creating the wonderful pastry seen in the movie.
Posted by Bruce Oksol at 6:24 PM No comments:

Of seven wells coming off the confidential list this weekend and Monday, only one is shown as producing at the moment. This often means that the non-producing ones are going to DRL status or SI/NC status.

First up, Apple: "human" edited news, not "robotic" news to be core of Apple.


This marks a distinction from rivals such as Facebook, which is crafting formulas that aim to deliver articles users want based on their Web habits, demographics and interests.

On deck: the US Open without Tiger. [Later, 9:20 p.m. CT: wow, what a finish. Jordan Spieth wins after a double bogey at 17 and Dustin Johnson 3-putts on #18. Dustin had a moderately difficult shot for eagle (and the outright win) on the 18th; went past, and then a moderately easy shot for par, pushing the tournament to an 18-hole playoff tomorrow; in fact, he misses, the moderately easy putt, and Jordan Spieth wins the first two majors of the year.]
In the dugout:  Greece, playing chess with Putin. Old news, being reprinted by the LA Times.


As Russia and Greece each endure strained relations with the rest of Europe, their leaders have been pondering how they might collaborate to sidestep their Western neighbors' sanctions and censure.

With his Balkan nation on the brink of economic collapse, Greek Prime Minister Alexis Tsipras on Friday paid his second visit in less than three months to Russian President Vladimir Putin to sign a lucrative pipeline construction deal and, presumably, to discuss what European Union member Greece might do to ensure that Russia receives relief from sanctions when current ones expire next month.

Up in the stands, reading the comics: Back to the Greek story. I think this is the key right here. The AP reminds us:


One crunch date is June 30 (a week from this next Tuesday).

That's when Greece's bailout program expires and the last 7.2 billion euros ($8.1 billion) left in it will no longer be available.

It looks like it is coming down to a bidding war between Russia and Europe. There's no way Greece is going to let $8.1 billion slip through their fingers.

The next paragraph in that story:

On the same day, Greece has to pay the International Monetary Fund $1.8 billion and it doesn't have the money to do so. If it doesn't pay, it won't be immediately declared in default by ratings agencies. But the IMF also says it wouldn't be able to lend Greece new funds until the arrears are taken care of.

It was reported earlier that the Greeks have said they want the IMF out of Europe. This is the trial balloon / shot across the bow telling the IMF not to expect their $1.8 billion a week from this Tuesday.  But Greece will get that $8.1 billion -- either from Europe, or from Russia.

No one is going to leave $8.1 billion on the table.

Even for George Soros, $8.1 billion is still a lot of money.

[Note: Russia doesn't have $8.1 billion, but it will provide energy, pipelines, promises of good will in lieu of cash.]

Later, 8:31 p.m. CT: wow, talk about hitting the bull's eye. My comment that this has turned into a bidding war between Europe and Russia. This is the Drudge headline right now: Washington fears losing Greece to Moscow. Financial Times has the story:


Throughout the prolonged showdown between Greece and its creditors, the Obama administration has largely sat on the sidelines, issuing the occasional warning about the potential economic impact of a default.

But with Greece now on the verge of bankruptcy, the US is also beginning to worry about the political fallout from a deeper crisis and the potential for Russia to gain increased influence over a Nato member.

As Washington tries to maintain a united western front in support of sanctions on Russia over Ukraine, a Greek default could provide Moscow an opportunity to sow new divisions among America’s European allies.

“You can easily see how geopolitically this would be a gift to Russia,” says Sebastian Mallaby at the Council on Foreign Relations. “You do not want Europe to have to deal with a Greece that is a member of Nato but which all of a sudden hates the west and is cosying up to Russia.”

Greece was regarded as a frontline state against the advance of Soviet-backed communism during the cold war. Its EU accession in 1981 is one factor that cemented its identity as a western democracy, something that was deepened 20 years later with the adoption of the euro.

For some months, the administration of President Barack Obama has been quietly urging Germany and other EU members to try to find a way to resolve the stand-off with Greece. While economic considerations have been at the forefront, diplomats say the EU’s position on Ukraine has also been part of the conversation.

By the way, how much has it been worth to Germany's Angela Merkel to keep Greece in the Eurozone? 240 billion.


Five years after the debt crisis spread from Greece, the record shows that Merkel has consistently defended the euro and backed German participation in euro-area rescues totaling 240 billion euros for Greece alone.


A Fool Such As I, Slim Whitman
Posted by Bruce Oksol at 2:44 PM No comments:

Kinder Morgan is seeking Federal Energy Regulatory Commission to build the $8 billion LNG export project near Pascagoula, Mississippi. The applicants are asking for FERC approval no later than June 17, 2016.

There are currently five LNG export projects currently under construction in the U.S., including ones owned in Texas and Louisiana by Houston-based Cheniere Energy and Freeport LNG Development.

The Gulf LNG Liquefaction Project would capitalize on Kinder Morgan’s existing pipeline and terminal infrastructure. The goal is to begin operations by the end of 2020 and export LNG to other parts of the world, including Asia.

Back on May1, 2015, RBN Energy posted a story on the future of US LNG exports to Asia. Although most of that article has been archived for subscribers only, the "Asian LNG Growth Graph" is still there. The tea leaves suggest that North America will be the global supplier of LNG in 2030 and growth will continue between then and now.

Also from that post, Saudi Arabia burning through cash:


From The Financial Times:


Saudi Arabia is burning through its foreign reserves at a record rate as the kingdom seeks to maintain spending plans despite lower oil prices. The central bank’s foreign reserves have dropped by $36bn, or 5 per cent, over the past two months, as newly crowned King Salman bin Abdulaziz al-Saud dips into Riyadh’s rainy-day fund and increases domestic borrowing to fund public sector salaries and large development projects.

The latest data show Saudi’s foreign reserves dropped by $16bn to $708bn in March, driven by public sector bonuses paid by King Salman after he assumed power in January. This follows a fall of $20bn in February. Saudi Arabia has spent $47bn of foreign reserves since October. The king this week reshuffled his royal court, replacing Crown Prince Muqrin, one-time heir to the throne, as he seeks to shore up his power base and promote a younger generation of princes, including his son and nephew.

That certainly explains why Saudi Arabia canceled that $109 billion solar energy program for desalination and domestic energy.
Posted by Bruce Oksol at 8:48 AM No comments: