June 5, 2016: a lot has happened in the last 36 hours, but one day later; this story won't go away. This remains the top story over at Google Finance. 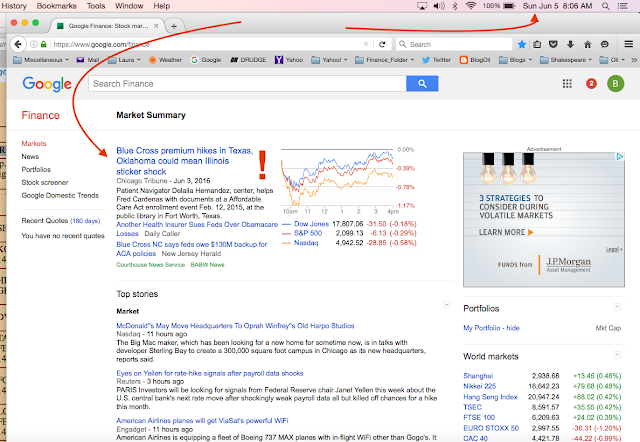 Those paying attention know that employers see these hikes coming and are doing what they can to minimize hiring.


Original Post
Right now, this is the #1 story, the top story, at Google Finance: http://www.chicagotribune.com/business/ct-blue-cross-obamacare-premiums-0605-biz-20160603-story.html. Obviously it's a dynamic link, but even I was surprised that this is the top Google Finance story today, Saturday.

One of the key aspects of ObamaCare (other than "if you like your doctor, you can keep your doctor") was the promise that ObamaCare would stop the rate of growth in healthcare costs which, at the time, were going up about 4% a year. Compare that with 54% now. Whatever. 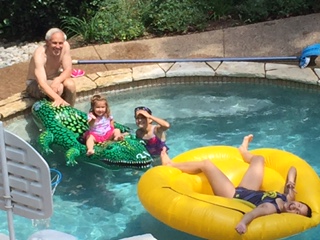 Taken from quite a distance with an iPhone. By the end of the day, Sophia was in her swimming suit and in the deep end of the pool on her "alligator."
Posted by Bruce Oksol at 4:38 PM No comments:

July 2, 2016: US exports of propane will soon exceed those of Qatar, Saudi Arabia, Algeria, and Nigeria combined.

Approval was granted for the Penco Lirquen LNG project, which comprises a floating storage and regasification unit.

The 1,200-megawatt Central El Campesino power plant, which will be supplied by the gas import vessel, “should be approved” in July or August.

This approval marks a milestone for Cheniere, which has a 20-year agreement to supply gas to the power plant. Cheniere is also a co-owner of the LNG import project with Biobiogenera, according to Hoegh LNG Holdings Ltd., which is building the terminal.

Success in Chile may help Cheniere find other new buyers needed to sign long-term contracts before it makes a decision on an additional liquefaction plant at its Corpus Christi facility in Texas, according to Energy Aspects Ltd. and Hennessy Funds.

The new plant is projected to have a nameplate capacity of 300 million cubic feet per day (MMcf/d) and the capability to extract over 40,000 barrels per day of NGL.

Notably, this is the third cryogenic natural gas processing plant announced by Enterprise Products Partners in less than 24 months.

The first cryogenic plant – the South Eddy facility – was brought online earlier this year. The second one is the partnership’s joint venture processing plant at Waha, which is expected to be commissioned in the third quarter of 2016. The partnership expects these efforts to augment the processing capacity in the Delaware Basin to 800 MMcf/d from 40 MMcf/d in 2012.

June 8, 2016: Shell plans to go ahead with huge petrochemical plant in Pennsylvania.


Original Post
The headline stories seem to be all about keystoned pipelines and derailed CBR but the real business of the oil and gas business keeps going on and on in the US. Another example: LyondellBasell plans third-quarter startup for Corpus Christi ethylene expansion.


LyondellBasell has entered the final phase of construction on an 800 million-lb/year ethylene expansion project currently under way at its complex in Corpus Christi, Tex. (OGJ Online, July 1, 2013).

Final construction work on the major expansion project will occur over the next few months. Once completed, the expansion will increase ethylene capacity at the Corpus Christi plant by 50% from its current production.

The Corpus Christi expansion comes as part of a multiyear growth program the company launched in 2012 that focuses on debottlenecks and cost-effective expansions at its existing plants, all of which were benefitting from rising North American shale gas production.

The 21st century will be known as the "Century of Energy" and the US will be at the forefront.  There's no stopping it.

From icis, January 16, 2014: An avalanche of petrochemical and polymers capacity is coming in the US, with construction starting in 2014.


The US shale gas boom has brought a renewed competitive advantage to the sector, spurring plans for additional new crackers.

There are now plans announced for a total of 10 new ethane crackers in the US – eight on the US Gulf Coast, and two in the northeast US. This represents around 12.5m tonnes/year of ethylene capacity, according to an analysis by ICIS.

Seven projects are beyond the feasibility stage and six companies have announced capacity figures for seven crackers.

Look what "they" were planning back in April, 2013: about 5 new world-class crackers. In the story posted today, the number is up to 10.

This sounds about right. A press release suggested that three expansions (each about 800-million lbs) would add up to a single new plant, and 3 x 800 = 2,400, which is very close to 2,800 million lbs. So it looks like, in a 30-second soundbite, the average ethylene plant now being constructed in the US has capacity of about 2,800 million lbs/year. Or 3 billion lbs/year, I guess.
Posted by Bruce Oksol at 9:08 AM No comments:

The Bakken Meme: an occasional note

The Syrian-Lebanese History in Williams County: an occasional note

Pipelines
Dakota Access Pipeline back on track in Iowa?

This is really cool. Don has provided a possible explanation for the jump in US gasoline production reported in March.

Meanwhile, for those who think refiners are making money hand over fist with all this refining, think again. From FuelFix, a story sent to me by a reader some time ago (thank you):

The worst crude oil downturn in a generation, which at first helped refiners’ profits, has now passed through to the fuel prices. Now, gasoline is cheaper than the ethanol that refiners have no choice but to use.

Ethanol averaged 30 cents above gasoline in Chicago during the first quarter, costing HollyFrontier Corp. $36 million. Chicago ethanol now runs at about a 2-cent premium to gasoline, while Los Angeles prices are 24 cents higher, David Hackett, president of energy consultancy Stillwater Associates said. Ethanol futures on the Chicago Board of Trade averaged 21.5 cents above gasoline contracts on the New York Mercantile Exchange in the quarter, compared with an average 48-cent discount in the same period during the previous five years.

The Renewable Fuel Standard program, introduced in 2005 under the Energy Policy Act by the Bush administration, mandates the use of about 18.11 billion gallons of renewable fuels this year, 80 percent of which is ethanol. For the first time, EPA this year mandated consumption targets that would exceed 10 percent of projected gasoline demand. EPA’s proposed biofuel targets for 2017 are currently under review at the White House’s Office of Management and Budget, according to a government filing.

From Reuters/Rigzone: Nigerian militants say their aim is "zero oil output" after three new attacks. See my post of June 3 regarding Nigeria before these most recent attacks.

I think this was posted previously; I forget. Saudi Aramco diversifying. Rigzone is reporting: GE Oil & Gas has signed an agreement with Saudi Aramco and Italy's Cividale to construct the Middle East and North Africa's first-of-its-kind, high-end forging and casting manufacturing facility to serve the region's energy and maritime industries.

Speaking of which: yesterday while driving out to see the new Buc-ee's at the intersection of Texas State Highway 114 and I-35W, we drove past "GE Manufacturing Solutions" and saw six brand new Norfolk Southern diesel locomotives (black and shiny) and one new BNSF (orange and shiny) on the tracks outside the facility. I don't recall ever seeing brand new locomotives literally off the "assembly line." I did not have my camera, unfortunately, but there was no place to park, so perhaps it was best.

No links, but there have been quite a few stories on Vaca Muerta lately (over the past 24 months).

How bad are the ObamaCare premiums going to be? From the Chicago Tribune: Blue Cross premium hikes in Texas and Oklahoma could mean Illinois sticker shock.


llinois residents who buy Blue Cross and Blue Shield health care coverage through the state insurance exchange may be in for Obamacare sticker shock, if proposed rate hikes by the largest insurers in Texas and Oklahoma are any indication.

The GOP needs to run, not walk, away from this debacle. Let the Dems handle this one.

Yesterday, I saw a new use for the term. Apparently, Greenland's ice volume is re-balancing. Actually, I'm not quite correct. The story has to do with "the glacial mass balance of Greenland."

Apparently, the "glacial mass balance of Greenland is increasing despite the fact that reliable sources continue to report that global temperatures are on the rise.

My hunch is that "warmists" can easily explain away this counter-intutitive observation:

The fact is, that snowfalls are higher than the amount of ice that melts, and the mass balance is strongly positive again this year.

The source is out of Italy and any source based in Italy certainly has to be reliable; why would they lie?
Posted by Bruce Oksol at 8:04 AM No comments:

FBI Director will dedicate the new FBI Resident Agency in Williston on June 6, 2016. It is the first new FBI resident agency to open in more than 30 years. Yes, it's a big deal. I believe the only other FBI-RA in North Dakota is in Fargo; maybe one in Bismarck, I don't know.

Williston will receive $46,000 in federal funds for Veteran housing.

Williston will host a free BBQ for Watford City residents on June 8.

BNC National Bank readies for construction project in Crosby. Yes, Crosby.
Posted by Bruce Oksol at 7:40 AM No comments:

Here are a few highlights from the "Review" section of today's WSJ that caught my attention.
From Sports Illustrated, very recently: how Katie Ledecky became so dominant in the pool. The article appeared in the May 30, 2016, issue of SI.

Compare Ledecky's accomplishments with Emil Zatopek. From the WSJ review:

Four years later, at the Helsinki Games, he took gold in the 5,000 meters, the 10,000 meters and, stunningly, the marathon—his first, which he entered on something of a whim.

All three runs were Olympic records, and the trifecta has never been matched (and probably never will be). Zátopek went on to set world records for 20,000 meters, 25,000 meters, 30,000 meters, 6 miles, 10 miles and 15 miles. He held the men’s one-hour world record for years and was the first to break the 20,000-meter mark in that time.

Speaking of marathon's, my "fun" book right now: Athens: A Portrait of the City in Its Golden Age, Christian Meier, c. 1993.

Friday:  242, including:
Thursday, 134, including:
Wednesday, 116, including:
Even ATT is flirting with new 52-week highs.
The usual disclaimer holds. See "welcome," and/or "disclaimer."


Things Have Changed, Bob Dylan
Posted by Bruce Oksol at 6:49 AM No comments: