One well coming off confidential list Tuesday:
The daily activity report was not posted at COB. It was posted overnight, and the summary is here.

Link here. Inter Pipeline Ltd has agreed to acquire the Canadian businesses of Williams Cos (WMB) for $1 billion (US).


The purchase includes liquids extraction and processing facilities in the oil sands as well as about 260 miles (418 kilometers) of pipelines owned by Williams and its master-limited partnership unit, Williams Partners LP, the companies said in statements on Monday. Williams and Williams Partners said they plan to use the cash proceeds to shrink debt.


The problem was that its state-owned oil company stopped producing as much after Chavez took money that should have gone into maintaining its fields and put it into social spending instead. This was the economic equivalent of eating your seed corn when it would have grown you more than ever before. Now, at first, the regime was just spending more than it had, but eventually, after oil's vertiginous drop, this became more than it could borrow as well. So it did what every bankrupt government does: It printed the money it needed. Which is why inflation went from 19 percent in 2012 to, the IMF estimates, 720 percent this year, and a projected 2,200 percent the next.

Even some of the worse episodes of Miami Vice in the first three seasons are still better than even any of the best cop shows currently running on network television. Of course that's a meme; I haven't watched a "current" cop show in years. But I'm watching Miami Vice again, starting this week with season 1, episode 1. Binge watching.

The filmography is still second to none; and the music is incredible.

I get the munchies, and make another batch of Mickey Mouse waffles.

Life could not be better. 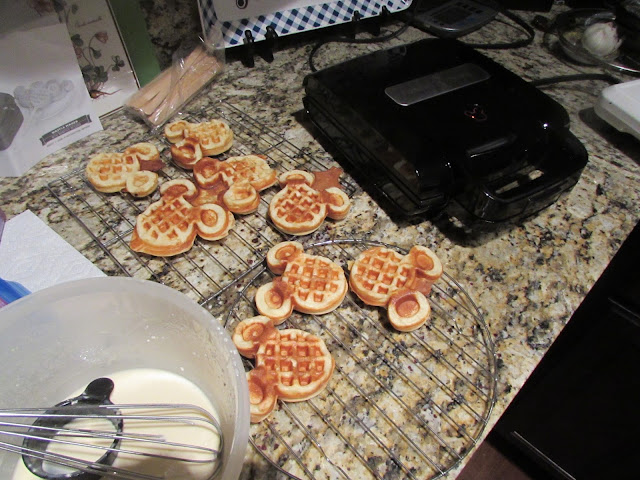 A word to the granddaughters: learn to cook, learn to bake. You will never go wrong.
Posted by Bruce Oksol at 5:29 PM No comments:

SM Energy to acquire Rock Oil Holdings, LLC. Data points:
It should be noted that in the linked article above, it was reported that SM Energy had previously reported selling its producing assets in North Dakota and Montana to undisclosed buyers. From Oil & Gas Investor one week ago:

SM trimmed another 45% off its 2016 capex, down to about $705 million. The budget has roughly equal amounts to SM’s core assets:


Op-ed on Saudi's situation, posted a couple of days ago at Naked Capitalism.  Nothing in the linked article that regular readers don't already know, but it's an August, 2016, update. The comments are always entertaining. I find it interesting how quickly folks forget.

Early trading: The market is fairly flat, leaning toward the downside, but even so, there are 226 new highs on the NYSE and zero (0) new lows at the moment. That will change by the end of the day.

The reason the RBN story below is important, from The Washington Times:

Mixing an additional 700 million gallons of ethanol and other biofuels into the nation’s fuel supply to meet a goal of 18.8 billion gallons in 2017 will raise the biofuel percentage to 10.44 percent, or past the “blend wall” after which car engines can be damaged, said Heartland Institute research fellow Isaac Orr.

“It’s hard for anyone to argue that the renewable fuel standard has been a good policy, and the Environmental Protection Agency’s decision to increase the amount of ethanol in the nation’s fuel supply means this train wreck of a policy will continue for at least another year,” Mr. Orr said in a Thursday statement.

“Owners of small engines like lawn mowers, snow blowers, and boats are hurt by ethanol mandates because ethanol is hard on these engines,” he said.


RBN Energy: is there a showdown on the RFS and RINs in the offing?


Renewable Identification Numbers (RINs) have grabbed the attention of refiners this spring and summer, and for good reason. The price of RINs –– ethanol credits used by refineries to prove compliance with the federal Renewable Fuel Standard –– have soared, and the credits are having an outsized negative effect on some refiners’ costs and profitability. Part of the RIN price spike can be attributed to concerns that there may not be enough to go around this year, and that the situation in 2017 may be far worse. But the rocketing cost of the credits is also raising questions about whether the largely unregulated and opaque RINs market is being manipulated or even cornered by those hoping for a quick, Powerball-size profit. Today, we continue our review of the RINs market with a look at which types of refiners are hit hardest by high RIN prices, and at whether we might be heading off a RIN-availability cliff.

Imagine for a moment that your biggest monthly bills weren’t your mortgage, your car payment, and maybe child-care or private-school tuition but, say, the cost of shampoo or pet food or paper towels. You would know something was seriously out of whack, yes? Well, consider the fact that for a number of U.S. refineries, their biggest operating cost in the second quarter of 2016 was not for labor or natural gas or electricity, but for RINs – paper credits created by the Environmental Protection Agency (EPA) to help ensure that the provisions of the Renewable Fuel Standard (RFS) are being complied with. Few guessed we’d end up here, with RIN prices approaching $1/credit, and no one can say with certainty what 2017 will bring. Still-higher RIN prices? More merchant refiners getting into the fuel-blending business or even the retail gasoline biz to mitigate their RIN risk exposure? A complete reworking of the RFS and the RIN program by EPA or Congress?  In the land of government mandates, it seems like anything could happen.