See first comment: reader noticed that Halcon has new permits in Williams County. This goes back to earlier discussion when Halcon said they were going to focus on Fort Berthold wells.

Eighteen (18) producing wells were completed:
Wells coming off the confidential list Tuesday:
Green Lake: this looks like the first reported Bakken well in this 12-section field in Divide County, well north of Williston.

Five (5) new permits --
Operators: HRC (3), Oasis, Solutions Energy
Fields: Tyrone (Williams), Black Slough (Burke), Lone Tree (Ward)
Comments: this is the first permit for Solutions Energy; Lone Tree field is in northwestern Ward County; there are about a dozen old Madison wells there; most are no longer producing; it appears the EUR for these Madison wells averages about150,000 bbls


Wells coming off confidential list over the weekend have been posted; see sidebar at the right.

While looking for a "new" Emmylou Harris song, I happened across this "old" one. I would not have recognized the song had I not taken a cross-country trip from north Texas to the Bakken some months ago. On the trip home, passing through my favorite cross-country city, Oklahoma City, I happened to catch a Lou Reed retrospective, which I touched on some time ago.


Here’s the problem with MSNBC and CNN: predictability. You already know what they’re going to say on any issue. So why watch?

I once knew a piano player in a fancy restaurant I used to go to who could play only one song really well: Moon River. You’d get it fast and slow and reggae and cha-cha and gospel and jazz and blues, but it was still Moon-effing-River. Now if you liked Moon River, you were golden. If you didn’t, go some place else. That’s MSNBC – a “one-note Johnny.”

On the other hand, Fox is unpredictable. Of course they might have a conservative slant, but they bring in far more libs to speak their piece than MSNBC does conservatives. And I like Megyn Kelly a lot. The woman has a mouth on her. You never know what she’ll say next. Ailes allows her to go off-script. You never see that at MSNBC or CNN. Stick to the copy!

I am happy to report there were no demonstrations or looting in downtown Williston today. I attribute that to the fact, based on analyses from mainstream media "news" outlets, that there were no militarized police visible during the day in downtown Willison.  Lots of construction workers, but no militarized police. I haven't had the chance to check on Watford City; I'll watch the news tonight.

You know, now that I mention it, when stationed in Turkey, there were militarized policemen everywhere .. and no looting or demonstrations. No rubber bullets either. Real ammo.
Posted by Bruce Oksol at 2:14 PM 2 comments:

A reader sent me a link to a story of Exelon buying a natural gas power plant in Boston; Houston Biz Journal is reporting:


Houston-based Calpine Corp. is buying a natural-gas fired power plant in Massachusetts from Chicago-based Exelon Corp. for $530 million to boost its presence in that area.

The deal — which translates to $655 per kilowatt — is expected to close in the fourth quarter and will increase Calpine’s footprint in the New England competitive wholesale power market.

The plant, Fore River Generating Station, was built in 2003 and is 12 miles southeast of Boston.

Now, let's see if the solar cost is still accurate. In another story sent, the link sent by the same reader, is reporting that Verizon is adding more solar power:

To date, Verizon has invested nearly $140 million in on-site green energy. With the 2014 solar investment announced today, Verizon is on target to deploy upward of 25 megawatts of green energy upon completion of the new solar projects.

This will help with the tsunami of oil, natural gas, condensate tsunami hitting the gulf coast. Houston Biz Journal is reporting:


Houston-based LyondellBasell Industries will build a new chemical plant in southeastern Texas that may cost more than $1 billion.

The rapidly growing chemical company plans to produce 900 million pounds of propylene oxide, or PO, and 2 billion pounds of tertiary butyl alcohol, or TBA, and its derivatives annually at the plant.

The specifics do not interest me; the reason for posting the story -- further evidence of the widening gap between US and EU energy industry.

Look at the size of that investment: another $1 billion.
Posted by Bruce Oksol at 1:31 PM No comments:

Two items readers have sent me.

First, oil activity along the North Dakota - Saskatchewan state/province line, as reported by the Prairie Post:


With $48.4 million in revenue raised at Saskatchewan’s August sale of petroleum and natural gas rights, the 2014 calendar year total for land sales is now $158 million, already surpassing land sale revenue totals for both the 2012 and 2013 calendar years with two sales remaining.

“The Bakken and Shauanvon light-oil plays in southern Saskatchewan are both prone to spectacular single-parcel results that we experienced once again in this sale,” Economy Minister Bill Boyd said.

“However, we’re equally pleased about land acquisitions in the heavy oil-prone areas of the province that are consistent in sale-after-sale, year-after-year. “By any measure, the volume of heavy oil in the province, estimated at 20 billion barrels of heavy oil in place, is impressive, but recovering this oil is a complex and capital-intensive process.

The August sale saw the Weyburn-Estevan area receive the most bids with sales of $43 million. The Lloydminster area was next at $2.1 million, followed by the Swift Current area at $1.8 million and the Kindersley-Kerrobert area at $1.5 million. The highest price paid for a single parcel was $17.1 million. Standard Land Company Inc. acquired the 2,201-hectare exploration licence east of Estevan. The highest price on a per-hectare basis was $10,136. Plunkett Resources Ltd. bid $634,520 for a 62.6-hectare lease southeast of Estevan.

The second item was a pdf: the changing face of world oil markets, Department of Economics, UC-San Diego, July 20, 2014. Five areas of discussion:


I doubt legislators in Bismarck are really paying much attention to the Bakken. Not paying attention to something is how things take us by surprise. I have always been and remain inappropriately exuberant about the Bakken, but there are some realities.

Today, RBN Energy has an essay on precisely what I was alluding to: the day of reckoning.


Last week RBN co-hosted the “Surviving the Flood” conference with Turner, Mason & Company in Houston. The major theme of the conference was the expected timing and likely impact of a “Day of Reckoning” for the US oil market that could come any time between 2015 and 2020 depending on critical factors influencing market dynamics. If and when the big day arrives, and if export rules don’t change and refinery hardware is not upgraded, Gulf Coast light Louisiana sweet (LLS) crude could be trading at a discount of $15-$20/Bbl to international light sweet benchmark Brent. Today we discuss the day of reckoning and its critical influencers.


The Day of Reckoning could theoretically come as soon as next year (2015) if all of the factors we have described here do not work in favor of reducing US crude imports and increasing processing of domestic shale. The extent to which some or all of these factors improve the volume of domestic shale crude that US refineries process will delay that DOR – perhaps until after 2020. A significant change to the export rules to permit all crude exports is not expected by either RBN or TMC but it would of course be a game changer that would postpone the DOR for good. The positive news is that the oil industry is responding to the challenge and making progress in pushing back the DOR. We will continue to inform that debate.

Some data points North Dakota needs to keep in mind:
An unchanging trajectory, the math -- actually arithmetic -- is easy.
Posted by Bruce Oksol at 9:17 AM No comments:

As the numbers are posted, the previous post will be updated -- all the wells coming off confidential list today, but while waiting for them, need to move on.

I see the sun breaking through -- looks like it might be a very, very nice day here in the Bakken. I just received two more restaurant recommendations in the area: the Japanese restaurant up the hill, around the corner from Buffalo Wings. My sister took the family out to this restaurant a few weeks ago; raved about it. I will have to take my dad. The other one is Teddy's in Watford City. Again, these are just two of more than a dozen wonderful new restaurants (and old restaurants).

However, if you want the best traditional breakfast in the Bakken, it might be hard to beat the Country Cafe in Alexander. My dad wanted to visit the cafe yesterday; which we did. Wonderful breakfast at 12:00 noon; I don't know how long they serve breakfast, but at least through the noon hour. This is the real deal.

By the way, speaking of Alexander. The bypass around the city is coming along nicely; the north point is about a mile north of the city; it's going to be a nice, gentle curve to the west as you go south. It appears to parallel the city about a mile or so to the west. We couldn't locate where it will end up, but it appears it will be a full three miles south of the city -- which means it must be hooking up on the Sather Road somehow. It will be interesting to see how that sweeping turn at the Sather Road interchange will change.

Next story -- presssure builds on Obama to act.

Burger King in talks to buy Tim Hortons. Why is this important? It would allow Burger King to headquarter in Canada -- huge tax savings -- reported by CNBC earlier today.

Apple's next act for the iPad. Sales have been falling for Apple's pioneering tablet, but the iPad still plays an important role. The biggest problem for Apple and the iPad: they are too good; they last too long; they don't become obsolete fast enough.

Lead story: Napa Valley earthquake. No fracking connection, as far as I know.

Disclaimer: this is not an investment site. Do not make any investment decisions based on what you read here or think you may have read here. 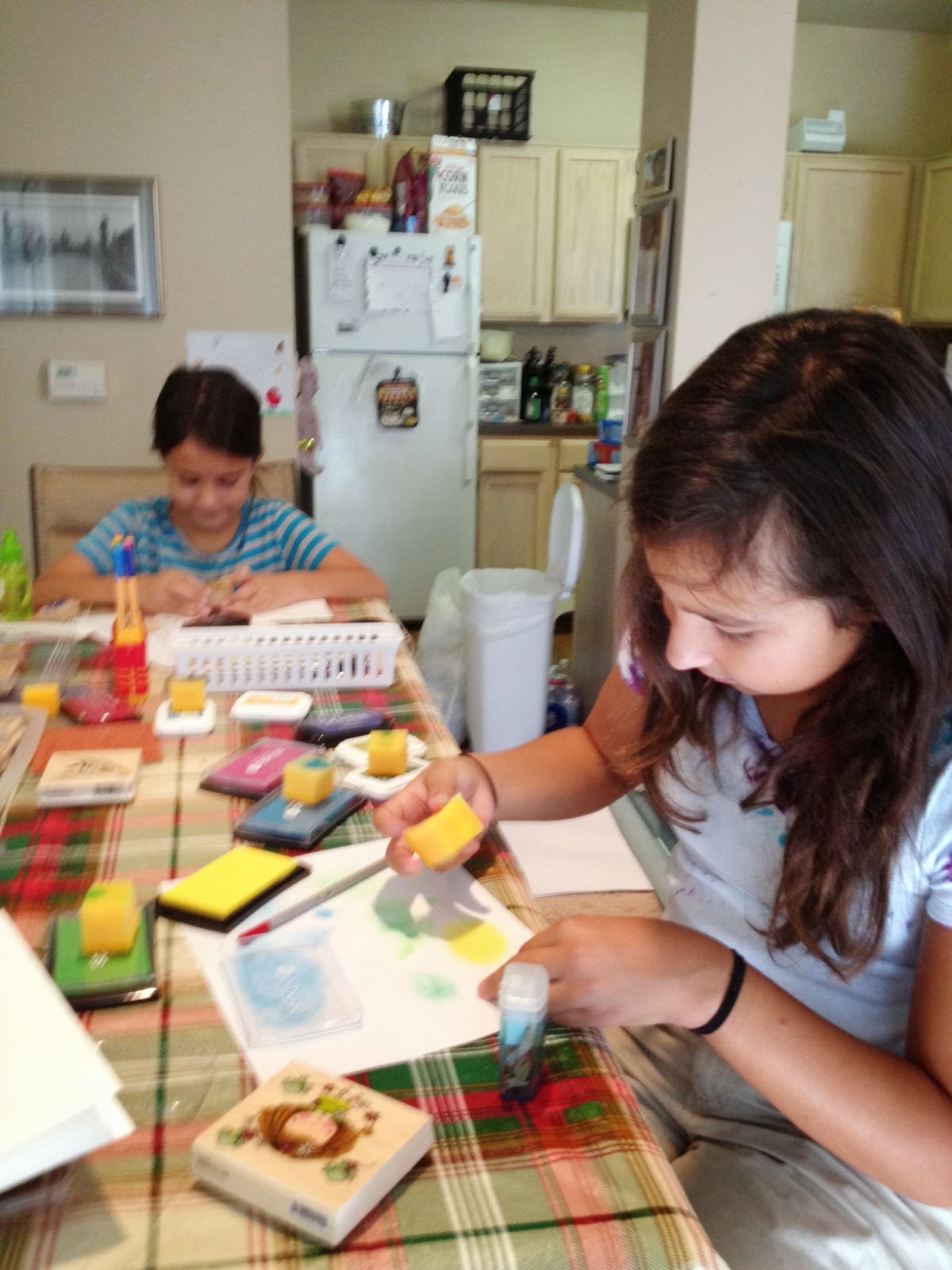 The quota is 500 greeting cards per day. No lunch or dinner until at least 350 cards are made.

But this is not a joke: AAPL is now worth $100 billion more than GE and Wal-Mart combined.