A Reader Has A Question About Deductions And Royalties -- August 22, 2015; Polar Vortex Re-Visited

Re: Is there a new deduction against royalties of 15%? (show original)
Well if it is 15% or what have you, it is write off on your next year's taxes, especially if U live out of state.  I did for last year and I had money coming back......

Sunday, August 23, 2015: how many folks remember this post about Chesapeake deducting transportation costs from royalty checks? Folks, I think we have the answer to the 15% deduction (unless Hess provides another explanation). A reader writes:


We are receiving royalty checks from Hess. I was told the new deduction they are showing on the checks is for transportation. In other words, they changed the gross pricing from wellhead to a collection point and show the difference as transportation.

They made the change some months ago and didn’t bother to tell the owners why.

XTO shows the gross as the wellhead price.

CLR includes a specific transportation charge each month. They all handle the pricing differently.

So, unless we get a note from Hess, we have the most likely answer.

Sunday, August 23, 2015: a reader provides this answer which hopefully answers the original question --


I was reading your column this morning in regards to the 15% N.D. tax. I live outside N.D. and here is what the oil companies take out of my check:


Keep in mind the 15% tax is a withholding tax, meaning that you will get credit for it as taxes paid in when you file your North Dakota individual tax return.  It was implemented by the state to make sure non-resident's filed their individual tax returns.  The withholding should be larger than your actual tax if you file so you should get a refund on your tax return if you have no other ND source income.


The 15% is a change in ND Tax Law which requires oil companies to withhold the minimum tax on out of state owners of royalties. The change took effect July 1, 2015 I believe.

I found the post I was looking for regarding new legislation affecting oil and gas industry but did not see the 15% deduction. Page 3 of the North Dakota income tax booklet says the withholding is only 3.22% and it began in 2014 -- see additional comments from other readers. It's possible the 15% includes this 3.22% withholding plus other deductions, but there must be much more to the story.


Original Post
Over at the discussion group, a reader had this question:


Is there a new deduction against royalties of 15%?

I just got my check for some new wells and just realized that there appears to be a 15% deduction showing up in the "Other Deductions" column - and last year there was never a charge in this column.

The wells are on pipelines and as far as I know, there shouldn't be flaring charges for the oil. Hess is the oil company.

I don't have the answer to this one.

Maybe readers with minerals and royalties can provide some help. I do know that a long time ago when I followed other discussion groups there were comments about "Other Deductions." There have been new North Dakota regulations with regard to flaring (as noted by the reader) and removing volatile gases before shipping by rail.

The Chicago Tribune is reporting:


Chicagoans will see a portion of their electricity bills rise in coming years because of new electric grid rules tied to the polar vortex back in 2013 - 2014.

The auction, which is held every year and sets prices three years in advance, was the first to implement the controversial rules that were approved after the extreme winter of 2013-14, when grid operators had to scramble to keep the lights on. The rules allow power plants in northern Illinois and other states to make more money from consumers in order to shore up electricity in frigid weather.

Electricity generators and others in Chicago's regional grid system, which stretches from northern Illinois to the Atlantic Ocean, pulled in an additional $3.4 billion this year over last.

Driving prices even higher in the Commonwealth Edison region was a reduction in energy supply caused by limitations on imports, as well as Exelon's Quad Cities nuclear plant failing to be picked in the auction for the second year in a row.

The polar vortex, which brought one of the worst winters in decades to cities across the U.S., rendered nearly a quarter of PJM power producers inoperable on a particularly brutal January day that saw temperatures plummet to negative 12 degrees in the Chicago area.

At the time, some coal plants that had promised to provide electricity stopped working because their conveyor belts froze, while some natural gas plants could not obtain enough fuel because of increased demand for heating.

There are so many story lines here, I can't even begin to go through them, but, of course, the biggest irony is the global warming myth superimposed on the polar vortex of 2013 - 2014.

Anyway, there's much, much more at the link. If you can't get to the linked story because a password/subscription is needed, google Chicagoans to be charged more for electricity in coming year.

That's how I got there after a reader alerted me to the story.


Those who live in North Dakota or grew up in North Dakota are probably re-reading the paragraph about " temperatures plummeting to negative 12 degrees in the Chicago area." Really?

From mid-January to mid-March, North Dakota can stay that cold 24/7 and much, much colder, routinely dropping to -40 degrees in February. To the best of my knowledge, REC or MDU do not have nuclear reactors to provide electricity. It's pretty much lignite, coal, and natural gas as far as I'm aware.

Yes, a  lot of story lines in that article. "Temperatures plummeting to negative 12 degrees?" The roughnecks keep working in that weather; maybe they don't frack, but they keep on drilling. And the truckers certainly continue hauling water and oil in minus-12 degree weather.

By the way, the Farmer's Almanac forecasts a colder-than-normal winter over much of the US this next winter. Previously posted.
Posted by Bruce Oksol at 6:08 PM No comments: 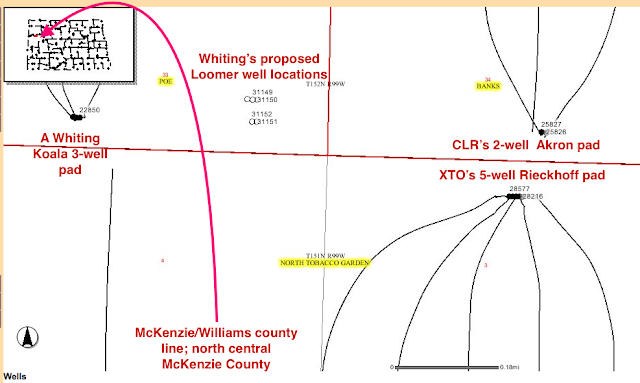 A Bit High-Tech For Me, But The Global Implications Are Interesting -- August 22, 2015

This is an interesting story, something I would not have come across on my own. A big "thank you" to a reader for sending it to me.

First some education for me, from wiki:
Apparently both isobutanol and famesene can be made from natural gas.

A company in California -- Intrexon Energy Partners -- has developed a method to convert natural gas to these compounds through "bioconversion."

The company needs a reliable source of natural gas and has partnered with Dominion Energy for that natural gas from the Marcellus and the Utica.

Actually, it would compete with ethanol. See this GreenTechMedia article from 2011.


Simply put, isobutanol -- which can be produced out of corn starch, cellulosic materials, agricultural residues and other ethanol feedstocks -- is an alcohol that acts like a hydrocarbon. The four-carbon molecule can be shipped in existing pipelines and blended with a variety of fossil fuel-based materials to produce greener versions of jet fuel, rubber, polyethylene or diesel.

Gevo has developed a genetically modified yeast that eats those feedstocks and secretes isobutanol. Currently, isobutanol comes from fossil fuels.

By contrast, ethanol is a soluble alcohol, one of the typical yeast byproducts. It corrodes pipelines, absorbs water and can only be used in certain applications like transportation fuel. Arguably worst of all, it has a lower energy density. A gallon of ethanol only contains around 67 percent of the energy of a gallon of gas. Biobutanol contains 82 percent, according to Gevo.

Meanwhile, the similarities between isobutanol and ethanol give Gevo an edge over some other bio-hydrocarbon makers. Because Gevo starts with a yeast, fermentation and similar feedstocks, the company can employ mothballed equipment and even entire ethanol distilleries as a foundation for its own factories. It will cost about 45 cents a gallon to retrofit a 100-million-gallon-a-year ethanol plant to produce Gevo’s isobutanol, says the company.

By the way, at the GreenTechMedia article it was interesting to see who was behind some of this: Cargill.

From the GreenTechMedia link:


There’s a good chance you’ve paid quite a bit of money to drink isobutanol. “One of the flavor notes of scotch is isobutanol,” says Patrick Gruber, CEO of Gevo, adding that the naturally occurring chemical accounts for a good portion of the difference in taste between scotch and bourbon.

I had come across isobutanol and its relevance to scotch somewhere in the past but I do not remember where.

I was sure it was in Heather Greene's book on whiskey but I was not able to find it.

These three books are the best books I've found on whiskey:
If I were teaching Organic Chemistry at the college level (and students were of legal age), I would begin the first week with a Scotch tasting (or aroma-smelling exercise for those who do not drink alcohol).

Email ThisBlogThis!Share to TwitterShare to FacebookShare to Pinterest
Labels: Biofuels

Yesterday (or was it the day before the stock market imploded?) I took a look at Nigeria and posted a pretty dismal screenshot of its crude oil exports to the US.

Earlier this month there was a story over at Platts that another western African country appears to be taking it in the  shorts, as they used to say in some parts of the country: Angola. Platts is reporting:


Chinese refiners have slowed down their purchases of Angolan crudes after a buying spree earlier in the summer due to expected refinery run cuts, which is pushing Angolan crude differentials lower.

The sluggish trend is also due to lower refinery margins caused by falling gasoil and diesel cracks as well as oversupply.

Angolan crude is heavily dependent on China, with almost 45-50% of Angolan crude exports going there every month.

Unipec, the trading arm of Chinese state-owned Sinopec, is by far the largest buyer of Angolan crude, buying almost 35-40% of the monthly export program.

But over the past two weeks, Unipec has been regularly offering September loading Angolan crude cargoes in the Platts Market on Close assessment process.

This has been an very unusual move for the company which usually takes 13-17 cargoes a month.

In addition, some of the cargoes that have been re-offered have been term cargoes that Unipec has with Angolan state-owned oil company Sonangol. "It's quite unusual for them," a West African crude trader said.

Angola is less dependent on the US, but even so, the trend does not look good: