The wells. It's possible these wells have been updated and already posted, but in case they have not, I don't want their initial production data overlooked:
Production:

Email ThisBlogThis!Share to TwitterShare to FacebookShare to Pinterest
Labels: 100K_Wells

This was supposed to have been posted last September, 2019, but somehow it got lost in the shuffle. The notes below refer to what we knew as of September 19, 2019, with the exception of the IP and updated production data.


Yesterday, I posted a note based on information from a reader. Below the fold is that note re-posted. At the time, I couldn't see the data because the wells were confidential. Today, a reader provided the "initial flowback data." Succinctly:

Disclaimer: this came from the "source," but as usual, I do make factual and typographical errors. If this is important to you go to the "source. 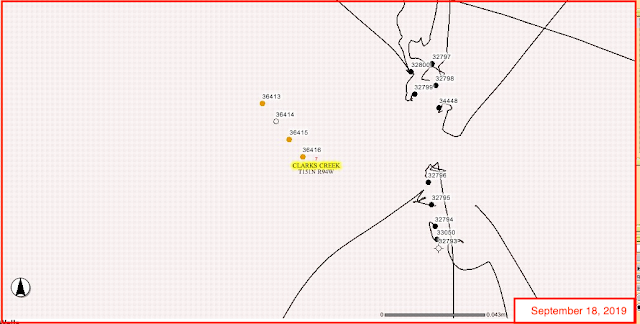 From a reader, just moments ago:


One of the best wells EOG has had in a while. 3 well Pad. Currently completing the 45,46,47 well to the the north. The 47 well is also a Three Forks well. Side note about half the sand pumped is from the Asgard (spelling?) mine which is 30-35 miles east of Minot.

The wells:
So, we will have to wait and see.

Wow, I "love" my readers. Thank you so much for all you have taught me and alerted me to incredible Bakken stories.

The Veeder wells are tracked here.

This well was not re-fracked:

Re-opening in north Texas: hair salons and barbershops allowed to re-open today.
Posted by Bruce Oksol at 10:40 AM No comments:

Farther to the east:

US weekly crude oil supply, in days, link here: new all-time record; at 41.9 days up from 41.0 days the previous report. "Norm" for the US is around 20 days of supply.

Email ThisBlogThis!Share to TwitterShare to FacebookShare to Pinterest
Labels: 70K_Wells

This May The Biggest National Story Of The Week -- California Deficit -- May 8, 2020

I wasn't going to post this (again). I either posted it earlier or at least provided a link to a similar story, but this article has staggering numbers.

I had to put it in context with comments from the governor of New York who said that New York state had a deficit of $13 billion (which, of course, is growing.

So, using New York's deficit as a marker, look at this: California's $21 billion surplus from one year ago has turned into a $54.3 billion deficit.

This has to be very, very concerning, what the governor said about that: "I just hope people are preparing themselves -- for the effort that we all need to engage together to undertake to unwind that and get back on our feet."

Link here: https://www.foxnews.com/politics/california-gov-newsom-lets-more-businesses-reopen-amid-coronavirus-after-revealing-staggering-budget-deficit. But the story is everywhere. Here is another link.

I am not listening to the news any more. I watch TCM, listen to classical music while granddaughter-Uber driving, and very selectively surf the net. I had not tuned into Rush Limbaugh for several weeks until two days ago. [I had tuned in earlier but there was a run of shows when he had a guest host; I never, never, never listen to his guest hosts.]

Anyway, yesterday, I listened to Rush Limbaugh for one hour, the second day in a row. I bike for one to two hours between 11:00 a.m and 2: 00 p.m. when Rush is on live in our local area, so I listen to his first hour or his last hour.

But then get this: the average amount of time a listener spends listening to Rush Limbaugh's show: 2 hours, 28 minutes. For heaven's sake: the show is only 2 hours, 28 minutes long; the other 32 minutes is taken up with ads and local news breaks.

Maybe he was joking; he has a great sense of humor.

Rigzone is a very, very good source of daily crude oil news. They seem to be quite selective in their stories and quite good in their own analyses.

Today, however, I see they have linked a story from CNBC about $100 oil in 18 months. I saw that story yesterday -- from another site -- click bait.

I do have to send a huge shout-out to Google: I had never thought of looking up the origin of the term "break dancing." Now I know -- thanks to Google. I assume I was the only one who did not know. I will have to ask our two old granddaughters and their mom if they knew the origin of the phrase.

Financial Times: Bakken shale -- long road back to recovery. Paywall. One can get to it via google. Archived.


North Dakota led America’s unconventional oil revolution more than a decade ago. Now its Bakken shale field is leading the big retreat. Oil output in the state, home to the Bakken’s most productive parts, has fallen by more than a third this year — a bigger drop than many individual Opec producers pledged in their historic supply-cutting deal in April — to less than 1m barrels a day, according to one industry estimate. The cutback follows a consumption collapse, triggered by the Covid-19 crisis, that saw US oil prices crash to less than zero last month. Despite recovering to about $26 a barrel, the West Texas Intermediate benchmark is still down more than half since the start of the year. As a result, total US oil production is expected to drop by up to 3m barrels a day from a high near 13m b/d a few months ago, according to analysts.

Friday, May 8, 2020: 25 for the month; 75 for the quarter, 302 for the year:
RBN Energy: Bakken rig cutbacks, well shut-ins to leave crude gathering networks underutilized. Archived.


The Bakken Shale is being hit especially hard by production cuts this spring. Crude oil-focused producers large and small have been shutting in wells and putting well completions on hold, slashing daily crude output by more than one-sixth. The rig count is down by half in less than two months — to 26, the play’s lowest level since mid-2016 — and thousands of oilfield workers have been let go. All this is happening despite the facts that the Bakken’s four-county core has some of the best shale assets outside the Permian and that in 2017-19 the play was super-hot, with crude production increasing by 50%. That three-year growth spurt spurred the development of a number of new crude gathering systems, many of which now face a period of significant underutilization. Today, we discuss highlights from our new Drill Down report on oil production and supporting infrastructure in the U.S.’s #2 shale play.