This is the list of 50 people who thought it important enough to attend.

In case the link breaks at a future date:

Here is a list of the world leaders participating at the Paris rally:


*The linked source put this name in bold. In fact, Eric Holder was in Paris at the time, but did not attend the rally; he was being interviewed on an American Sunday morning talk show.

President Obama was not the only one MIA: I haven't heard a peep / read a tweet from Neil deGrasse Tyson who tweeted earlier this year:


"Some claim the USA is a Christian nation, compelling me to wonder which assault rifle Jesus would choose: the AR-15 or AK-47."

As I said then: Jesus would choose neither.
Posted by Bruce Oksol at 9:18 PM No comments:

Wells Coming Off Confidential List Over The Weekend, Monday -- Janaury 11, 2015


The oil industry was listening as OPEC talked down crude prices to a more than five-year low.

Drillers, refiners and other merchants increased bets on lower prices to the most in three years in the week ended January 6, 2015, government data show. Producers idled the most rigs since 1991, with some paying to break leases on drilling equipment.

Producers are hedging more and drilling less on concern that the biggest plunge in prices since 2008 will continue. Oil fell for a seventh week after officials from Saudi Arabia, the United Arab Emirates and Kuwait reiterated they won’t curb output to halt the decline.

“Producers are desperately hedging their production in a drastically falling market,” Phil Flynn, a senior market analyst at the Price Futures Group in Chicago, said by phone Jan. 9. “They are trying to lock in prices because they are convinced that the market will stay down for a while.”

Oh, well, time to look at the wells coming off the confidential list tomorrow and the weekend:

When I read this headline -- "Why US inflation Stays Ultra-Low While Job Growth Is Surging" -- I couldn't wait to read the story. Not about inflation, but about the "surging" job growth. The AP is reporting:

Eventually, pay and inflation are supposed to start surging in response.

Last month, employers added a healthy 252,000 jobs — ending the best year of hiring since 1999 — and the unemployment rate sank to 5.6 percent from 5.8 percent. Yet inflation isn't managing to reach even the Federal Reserve's 2 percent target rate. And paychecks are barely budging. In December, average hourly pay actually fell.

Okay, now let's see if the writer explains why.

"I can't find a plausible empirical or theoretical explanation for why hourly wages would drop when for nine months we've been adding jobs at a robust pace," said Patrick O'Keefe, chief economist at consulting firm CohnReznick.

First of all, the premise of the article is wrong, all wrong. There has not been a surge in hiring. Using the unemployment rate to argue that there has been a surge in hiring is disingenuous: the US Bureau of Labor Statistics reported this week that a record number of folks have dropped out of the labor market, artificially dropping the unemployment rate.

But let's say, just for argument's sake, that hiring has improved. Why are wages not following?

With regard to ObamaCare, it is a fact that:
Other reasons wages are being held down:


http://www.fns.usda.gov/sites/default/files/pd/29SNAPcurrPP.pdf
This is an interesting spreadsheet. Year-over-year, October, 2013, to October, 2014, the percentage of folks on fold stamps decreased in almost every state .... with two huge exceptions. Not only did the number of folks on food stamps decrease year-over-year in California and Nevada, the increase approached 10%. That is not trivial. We are, what? eight years into the recovery?
After decreasing last year, the number of folks on food stamps is again increasing: 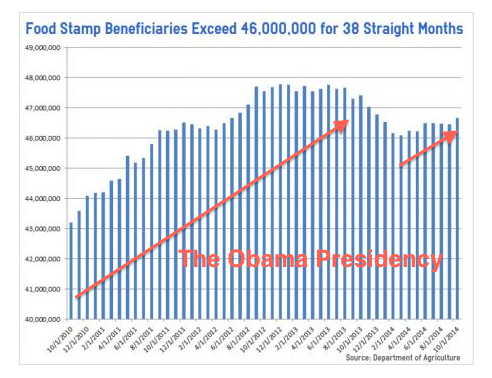 The plunge in oil prices has been one of the biggest stories of the year. And while cheap gasoline is good for consumers, the negative impact of a 50% decline in oil has been wide and deep, especially for major oil producers such as Saudi Arabia and Russia.

Even oil-producing Texas has felt a hit. The astute investor and prince of the Saudi royal family spoke to me exclusively last week as prices spiraled below $50 a barrel.

He also predicted the move would dampen what has been one of the big U.S. growth stories: the shale revolution. In fact, in the last two weeks, several major rig operators said they had received early cancellation notices for rig contracts. Companies apparently would rather pay to cancel rig agreements than keep drilling at these prices.

His royal highness, who has been critical of Saudi Arabia's policies that have allowed prices to fall, called the theory of a plan to hurt Russian President Putin with cheap oil "baloney" and said the sharp sell-off has put the Saudis "in bed" with the Russians. The interview has been edited for clarity and length.

At the end of the day, if consumers are paying less for gasoline; we finally see the end of all that "Peak Oil" talk; and the Saudis keep giving their only resource away, what's not to like?

There is one interesting thing that comes out of this: if Saudi has the resources to keep giving oil away at $50/bbl, their fields are much bigger than many have suspected.

Having said that, it will be interesting to see this play out with regard to shale:

It's been quite a day.

For North Texas water polo, it was game day today, all day. Our older granddaughter's team had two games. We lost the first game to the undefeated team in the area by a score of 6  to 5. It was 6 to 6 for a moment, but the tying goal was "reversed" -- a foul was committed that negated the score. Our team won by a score of about 16 to 6 -- I didn't see the final score; I was just enjoying the game. It was interesting after the game to hear from our granddaughter the difference in the scoring -- she was very analytical about it.

Then the replay of the controversial play/call that cost the Dallas Cowboys the playoff game.

Then the Golden Globes.

And then at 10:03, apparently a 6-alarm fire "called in" from our apartment complex. I saw red strobe lights outside the blinds, went out to look: no less than six water and ladder trucks; one ambulance; and, one command and control vehicle. One truck's ladder was over the building across the way, but no flames, no definite smell of smoke/fire. And then after about 30 minutes, the firemen started packing up. A prank phone call bringing six or seven or eight vehicles. Maybe we will learn more tomorrow.

And, finally, most important, I completed Brenda James' Henry Neville and the Shakespeare Code. I will move on to something else now but will come back to this book at a later date. James mentions what she is working on next but it is not clear whether it will be an article for a journal or whether it will be a new book. I think the subject will be too esoteric for a new book. 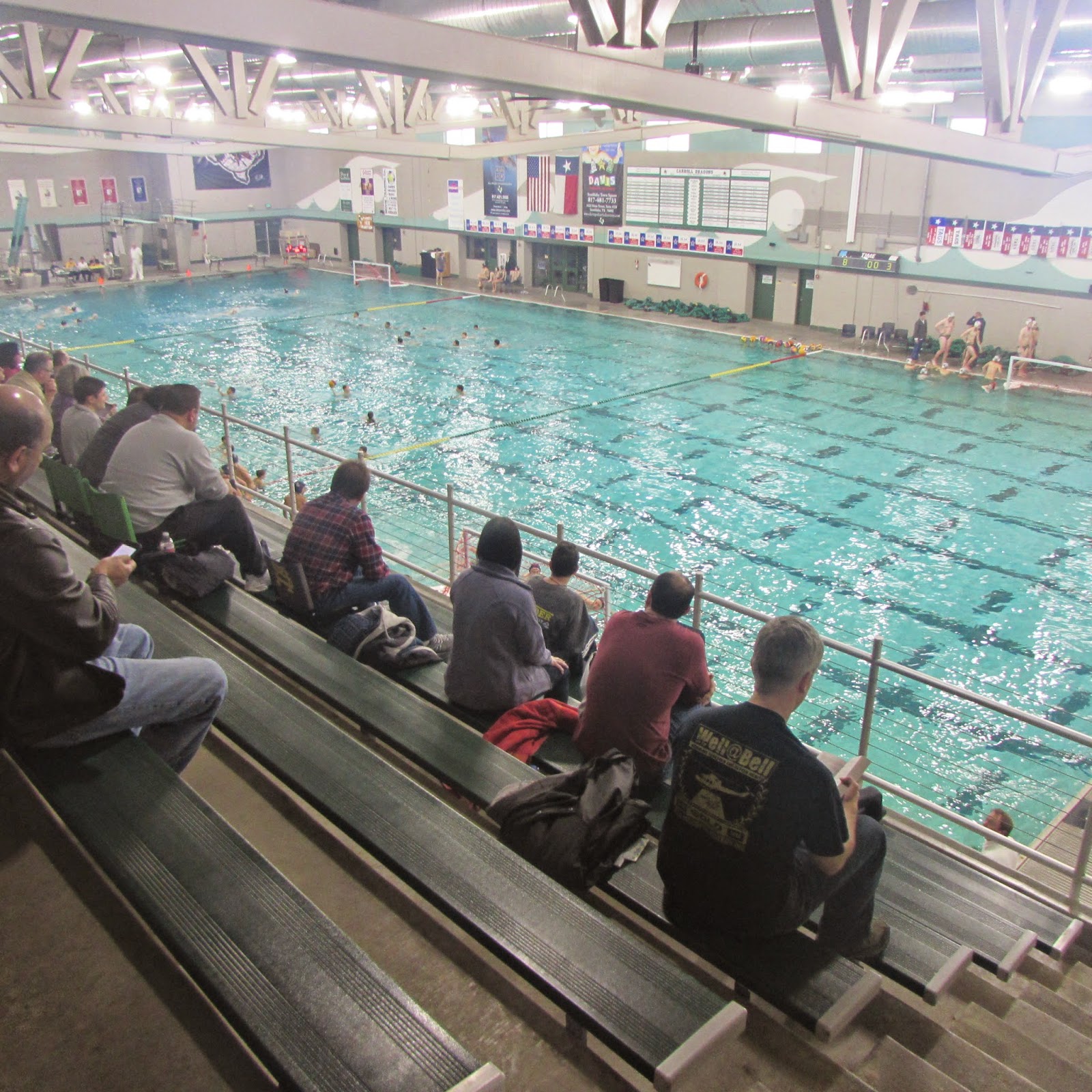 I agree with the writer. Investor's Business Daily is reporting:


It's shocking that Republicans, who won the last election by promising limited government and lower taxes, would in their first week back in power make noises about joining tax-and-spend liberal Democrats to raise the 18-cents-a-gallon gas tax. But that's exactly what they're doing.

Suddenly, a number of Republicans — who should all know better — are saying they'll "consider" a gasoline tax hike, especially if paired with something they want badly. A hike in the gas tax, they say, could "finance" other things — like a big-spending transportation bill, or even corporate tax cuts.

A headline in The Hill captures it perfectly: "Momentum builds in Congress for raising the federal gas tax."

Well, if the GOP is serious about being a party of limited government and low taxes, it shouldn't raise gasoline taxes; it should cut spending.

If they refuse, they shouldn't expect to be re-elected in 2016. The GOP's 2016 "wave" will crash. We're pretty sure of this since our own IBD/TIPP Poll, just finished on Thursday, asked 867 adults if they support or oppose a gas-tax hike. Fully 59% oppose it, while just 34% support it. Among Republicans, 70% are opposed and just 24% in support. Are you listening, GOP?


The 40-year old ban on most U.S. crude exports is set to be loosened after Mexico’s state-owned oil company asked for an exception.

Petroleos Mexicanos is in talks with the U.S. Commerce Department to import 100,000 barrels a day of light crude to increase Mexico’s gasoline production and improve refining. Pemex, as the world’s ninth-largest oil producer is known, would send its heavy oil to U.S. Gulf Coast refineries in exchange.

Oil producers including Exxon Mobil Corp. and Continental Resources Inc. have called for the U.S. to end the restrictions, saying booming domestic output reduces the need to keep supplies at home. U.S. oil supply has increased by 66 percent in the past five years, and a majority of that growth is in light oil from shale rock.

“The announcement suggests that this was done pursuant to some pre-arranged understanding between the two countries.”

Pemex’s request comes a week after President Barack Obama’s administration opened the door for expanded exports of an ultra-light type of crude oil known as condensate that has gone through minimal processing.

The Commerce Department published guidelines on its website for such exports December 30, 2014, the first public explanation of the rules involved.

Posted by Bruce Oksol at 1:35 PM No comments:

Reporting by The Dickinson Press:

Something For The Granddaughters: Projected Cost Of Solar-Plus-Battery Generated Electricity -- January 11, 2015

Cost of electricity:
From Forbes:


“To support grid defection, we believe the size of the battery needs to be very large, something akin to two-months’ worth of consumption,” Moody’s concluded. “The cost of electricity using that much storage would cost around 552¢ per kilowatt hour (kWh) on a levelized cost of energy basis.”

More specifically, the batteries would contribute about 535¢ per kWh to the total costs and the solar PV system would contribute the remaining 17¢ per kWh. To put this in perspective, the average retail rate of electricity for residential customers in Hawaii is about 36¢ per kWh.

Absent a major technological breakthrough, battery costs are likely to remain above $20 per kWh for several decades. In 2012, the U.S. Energy Information Administration projected that battery costs would fall as low as $135 per kWh by 2035 in the best case scenario.