September 8, 2019: it appears the Indian lunar probe may have landed on the moon. Engineers have "spotted" it and are now analyzing the data. No link. Story easily found.

How many times did the US put men on the moon and bring them back to earth?

Apparently that's more difficult to do than it seems. India, today, failed to simply land a small probe on the surface of the moon. And this is 50 years after Apollo 11, and one would assume the technology has improved since that time.


Landing on the moon has proven to be tricky, said Rajeswari Pillai Rajagopalan, the head of the Nuclear and Space Policy Initiative at the Observer Research Foundation, a New Delhi think tank.

“Since there was a deviation from the planned trajectory, the central engine could have malfunctioned. The other thing could be that the data transmission link got lost,” she said. “It could just be the communication link getting snapped but things being normal. It’s still difficult to say with certainty what could have gone wrong.”

Landing on the moon is particularly difficult because it has almost no atmosphere. That means parachutes can’t be used, so landers depend on thrusters to set them down at the proper speed and in the right place. Transmissions to and from Earth take more than a second, so the lander cannot be controlled in real time. The Indian lander was programmed to scan for a suitable spot to land and reach it automatically.

A similar Israeli mission failed earlier this year at around the same stage. As it descended to the lunar surface, it lost communications and hit the moon at too high a speed.

“These are challenging matters and it could happen even to more experienced countries,” said Ram S. Jakhu, former director of the Institute of Air and Space Law at McGill University in Montreal. “Knowing something in theory and doing it in practice is different.”

Seems to have a familiar sounding name.

Story here.
Posted by Bruce Oksol at 10:54 PM No comments:

The tracks of these storms practically overlap each other perfectly, as best I recall.


Tom Petty and the Heartbreakers, full concert, 1994
Posted by Bruce Oksol at 8:55 PM No comments:

This well was the subject of some notoriety when it was first reported back in 2010 or thereabouts. But that's ancient history. Full production profile at this post.

A Newfield Jorgenson well in Lost Bridge has just come back on line:
See link at June 7, 2017; has previously been featured.

Posted by Bruce Oksol at 8:22 PM No comments:

This page will not be updated. These wells are tracked elsewhere.

The well:
Let's see what's going on in that area. 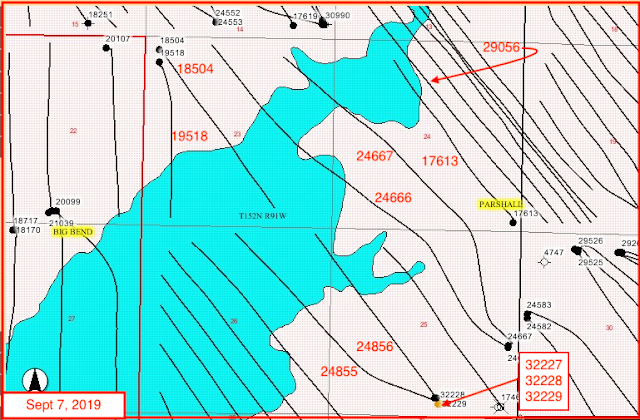 The other wells in the graphic:

Be sure to pay attention to the "chronologic" number of the wells. Also, see this post.
Posted by Bruce Oksol at 7:50 PM No comments:

I honestly don't understand why a "varsity" driver continues to race with the "junior varsity."

Looks like Mars, Incorporated, owns it all: M&Ms, and Combos.
Posted by Bruce Oksol at 4:42 PM No comments:

Seriously, is anyone paying attention?

Three Geoff Simon Stories From This Past Week -- North Dakota Most Dangerous State In Which To Work -- September 7, 2019

Top stories for the past week were posted earlier, but these three stories caught my interest. For additional top ND stories from Geoff Simon go to the linked post.


Crude pipeline flows from North Dakota's Bakken shale field have climbed to the highest in six months after the June closure of the largest U.S. East Coast refinery cut crude-by-rail volumes, according to traders and market intelligence firm Genscape.

The diverted barrels and rising production from the third-largest U.S. shale field are helping to offset some of the decline in supplies at the main U.S. storage hub in Cushing, Oklahoma, and adding to crude flows to the U.S. Gulf Coast, traders said.

Crude inventories at Cushing last week dropped to 42.3 million barrels, from 52.5 million barrels in June, according to the U.S. Energy Information Administration. Two new pipelines transporting crude from the Permian Basin of West Texas and New Mexico to the coast have reduced flows from West Texas to Cushing, traders and analysts said.

Before its June closure, Philadelphia Energy Solutions (PES) refinery had consumed a steady diet of about 40,000 bpd of crude transported by rail from the Bakken. Flows since the fire have stopped entirely, according to Genscape data. Bakken pipeline volumes over the past eight weeks reached as much as 980,000 bpd, utilizing more than 90% of its takeaway capacity for the first time since February. That was up from 874,000 bpd in the three weeks before the PES fire, the data showed.

"Extra flows from the Bakken help replenish Cushing storage and offset some of the impact of Permian barrels redirecting" to the Gulf Coast, one U.S. trader said. Crude production from North Dakota rose to a record 1.42 million barrels per day (bpd) in June, according to state data.


The second highest runoff ever recorded in the Missouri River Basin was increased again this week as the U.S. Army Corps of Engineers released their latest projections.

Significant rainfall has boosted the September forecast to 54.6 million acre feet of water, an increase of 1.7 maf from a month earlier.The September outlook issued by the Corps for the Missouri River Basin is 215% of average, exceeded only by the record runoff of 61.0 maf in the historic flood year of 2011.

Most of the water entering the system is occurring downstream from North Dakota, limiting the impact on water levels in Lake Sakakawea which has been declining for several weeks. Lake Sakakawea stood at 1,847.7 feet Wednesday following a peak elevation near 1,852 feet earlier this summer. Inflow into the large reservoir Tuesday was recorded at 32,000 cubic feet per second. Outflow through Garrison Dam was 46,100 cfs, an amount considerably higher than average for the season.

The release rate is scheduled to be reduced later this month before reaching an end of month rate of 42,000 cfs.

Most North Dakota worker deaths happen on the road, but the feds typically don't investigate them, Inforum, August 31, 2019. At 68%,


North Dakota had the highest percentage of its workplace deaths classified as transportation-related in the country for 2017, according to a Forum analysis of the latest data from the U.S. Department of Labor and the AFL-CIO.

Of the 38 workplace deaths counted that year in the state, 26 were transportation-related. That was compared to 40% for the U.S. and 45% in Minnesota in 2017, according to the analysis. Comment: I didn't pay a lot of attention to this article, but my first thought was  this -- compared to driving, actual work in the oil patch seems to be relatively safe. 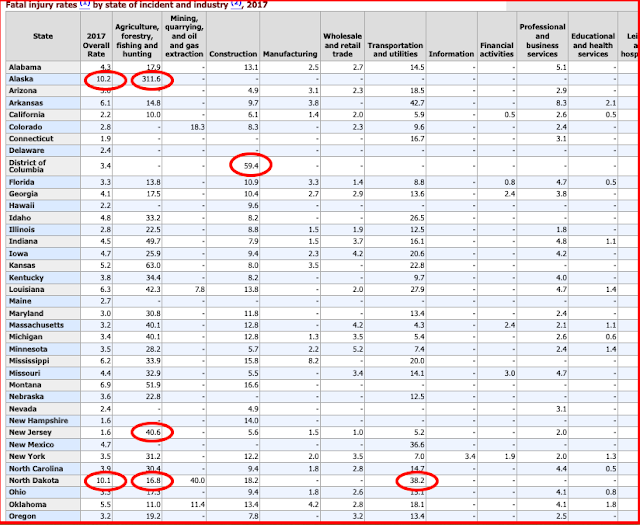 Washington, DC, construction deaths: say what? Five to six times the rate as the rest of the country. Now that seems to be a story waiting to be told.


OSHA investigated six work-related deaths in 2016 in North Dakota, according to state director Eric Books. So far they’ve investigated or are investigating four deaths in 2017, one oil and gas-related, a number Brooks described as historically low. OSHA measures years using the October through September fiscal calendar.